The first nuclear power plant begins to operate in the Arab world: threats to a power plant 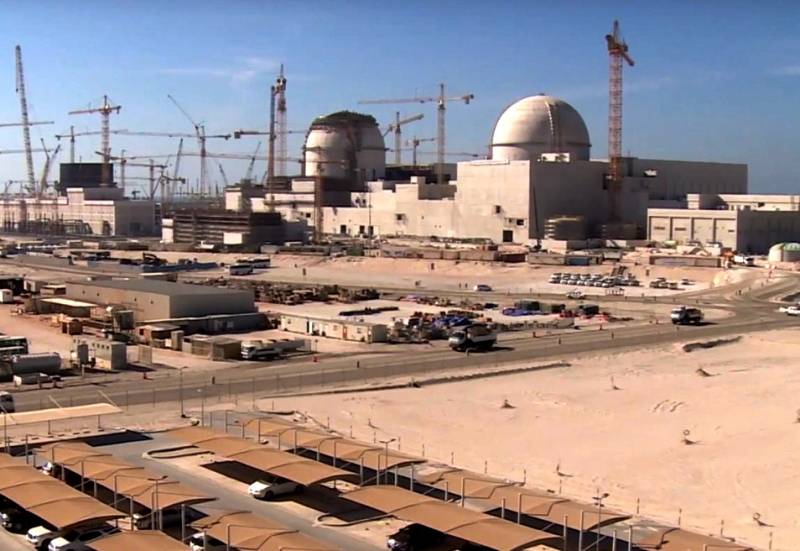 In the UAE, permission was issued to launch the first power unit of Baraka NPP. But this joyful event for the Emirates makes one think about the safety of a nuclear power plant. Indeed, the military-political situation on the Arabian Peninsula is now very difficult.


The opening of a power station on the Persian Gulf coast, the crown prince of Abu Dhabi, Muhammad bin Zayed, who attended the ceremony, called a new stage on the path to the peaceful uses of atomic energy. Baraka NPP is the first nuclear power plant in the Arab world. The launch of the first power unit opens up the prospect of commercial use of the nuclear power plant, and the second power unit will soon be launched. He is 95% ready.

The Baraka NPP has been under construction by the Korean Electric Company for over 10 years. Work began in 2009, and their cost is currently $ 24 billion. In total, 4 power units are to be built, each of which has a capacity of 1400 MW. In the UAE, it is hoped that over the next 50-60 years, a nuclear power plant will provide the country with electricity, and in addition will allow it to be exported, which will also benefit the Emirates. The license for the operation of nuclear power plants was obtained by Nawah Energy Company.

Meanwhile, in the southwest of the Arabian Peninsula, in Yemen, a civil war continues. Hussite rebels are fighting with their opponents and the Arab coalition troops that came to their aid, in which the main role is played by Saudi Arabia and the United Arab Emirates. The Husites of the UAE are perceived as a clear enemy, but not only on Yemeni land are they going to confront him.

Unlike Saudi Arabia, the UAE is located at a greater distance from Yemen and do not have borders with it. But this does not mean that the Hussites are not able to attack objects in the territory of the Emirates. Moreover, they threatened more than once with blows to the oil facilities of the UAE, as well as to the Baraka nuclear power plant itself. In 2017, the Hussites disseminated information about the attack on the power plant under construction, but then in Abu Dhabi the fact of an attack on nuclear power plants was denied.

Much now depends on the effectiveness of air defense, both the Emirates and neighboring Saudi Arabia. The UAE, like Saudi Arabia, is one of the largest arms importers in the world. And they are buying in the UAE weapon, produced in the USA, and in the European Union, and in Russia. For example, 50 Russian Pantsir-C1 air defense missile systems are already in service with the air defense forces.

Given the relevance of the threats from the Hussites and the need to protect their territory, the UAE will only increase the potential of its air defense. In this regard, it is interesting that both the UAE and Saudi Arabia are showing increasing attention to the latest Russian air defense systems, which are considered one of the best in the world.

We are in Yandex Zen
Time to change the heir. Qatari crisis as a cover for the struggle for power
Is the prince in Yemen dead or dying of a heart attack? How the Emirates got involved in the war
68 comments
Information
Dear reader, to leave comments on the publication, you must to register.