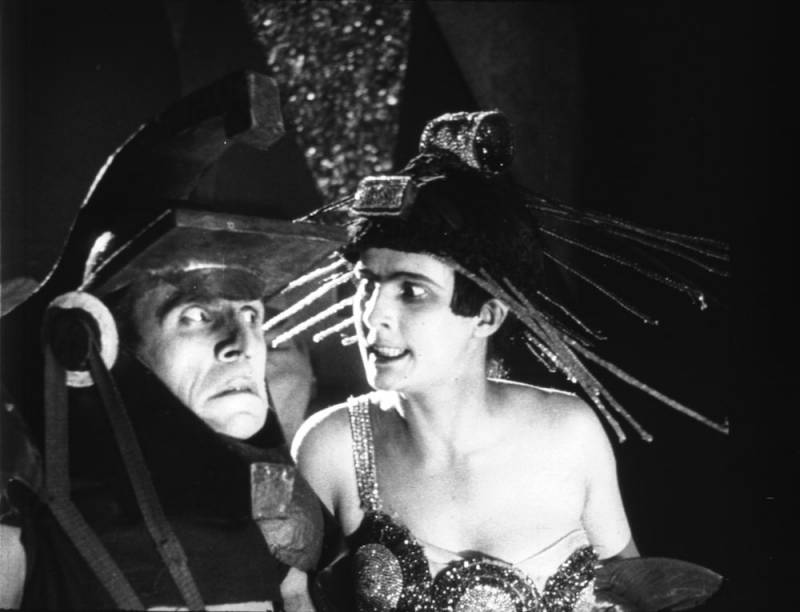 Aelita. Shot from the Soviet silent movie of 1924

“In the hands of everyone weapon in the form of a short, with a disk in the middle, automatic gun.
Gusev, staring, stood near the apparatus. Holding his hand on the Mauser, he glanced as the Martians lined up in two rows. Their guns were muzzle on a bent arm.
“Weapons, scum, like women keep,” he grumbled. ”
A.N. Tolstoy. Aelita

People and weapons. It so happened on our planet that weapons accompany us everywhere and everywhere, and even an inveterate pacifist who did not hold him in his hands for a period of time, anyway at least once, but he saw him in the cinema. And if he doesn’t watch a movie like that, then he went to school, read children's books, and there weapons are mentioned even in children's verses. In a word, it is everywhere with us: in verses, and in prose, and on TV, and on training grounds, and in battles. 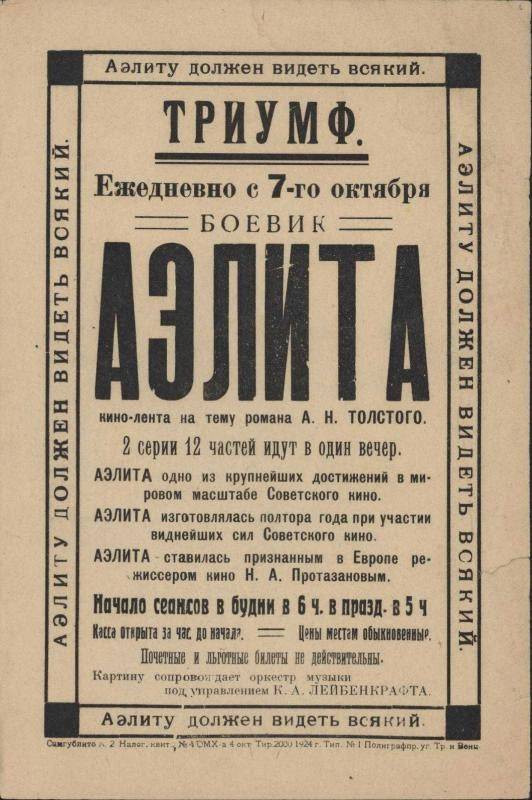 And this is the then advertisement for this film. Just kill God, I don’t understand why he was then called a militant?
Moreover, very often in the same literature, authors of works, describing the weapons of their heroes, sometimes make interesting finds, it is possible that by accident, or maybe on purpose. One of the first on this path we will meet Alexei Tolstoy, who wrote his famous novel “Aelita” back in 1922 and after that became the father of new Soviet science fiction. Already in 1924, the novel was filmed and, although this film adaptation was too free, it was nevertheless very interesting in its own way and also fell into the category of classics of young Soviet cinema.

It is hardly worth retelling the plot of the novel. For me personally, it was important that I met him a very long time, almost in elementary school, knew him by heart, and subsequently even made a diorama with an egg-shaped apparatus on the sandy surface of Mars and figures of engineer Los, the Red Armyman Gusev and red cacti in scale 1 : 72. All exactly the same as on the cover of my book then available. 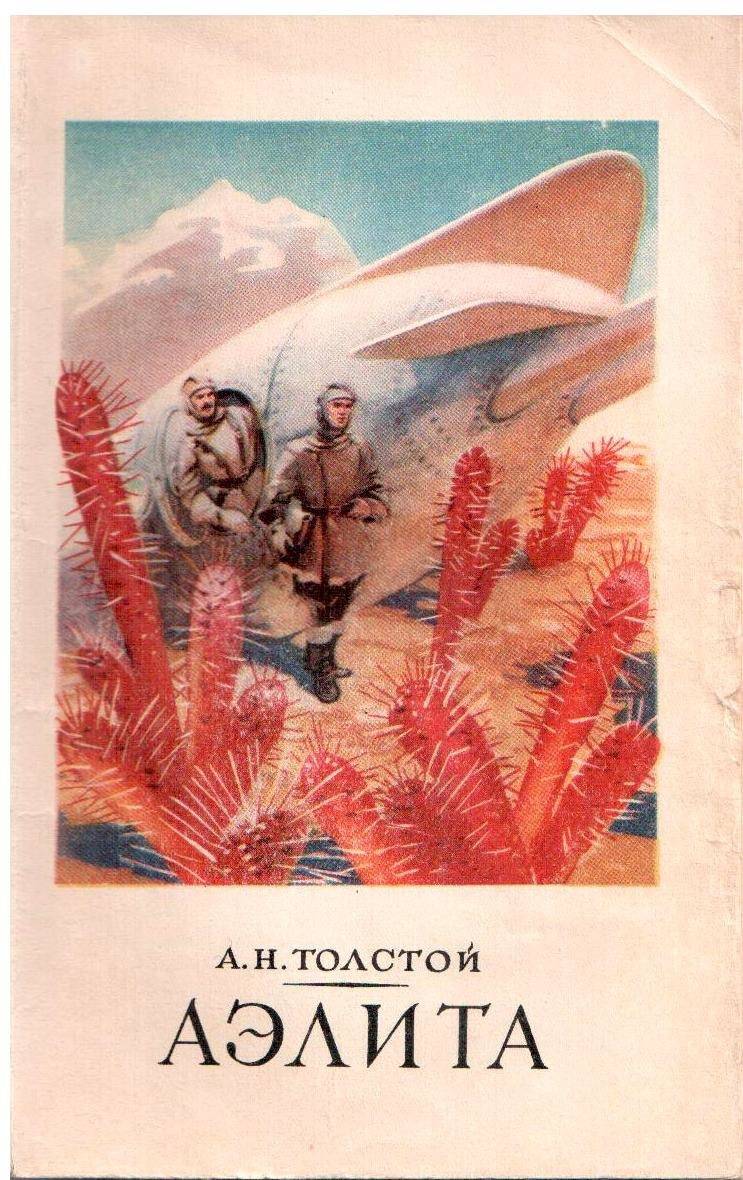 My favorite Aelita cover
In the novel, I was attracted by the description of the Martian weapon: "... a short automatic rifle with a disk in the middle." And, it turns out, not only me alone. Recently I meet a note about this on Yandex.Dzen. A typical truncated manner of presentation, but curious. It is curious that the local author drew attention to such a petty fact as the phrase “disk in the middle” is. Actually, this is the main detail in the description of the Martian automaton. This is a short gun that the “Martian scum” hold “like women”, that is, putting the barrel on a bent left hand and not holding the forearm. His caliber was also small, since the metal door that Gusev carried during the uprising, hiding behind her like a shield, did not penetrate these rifles. 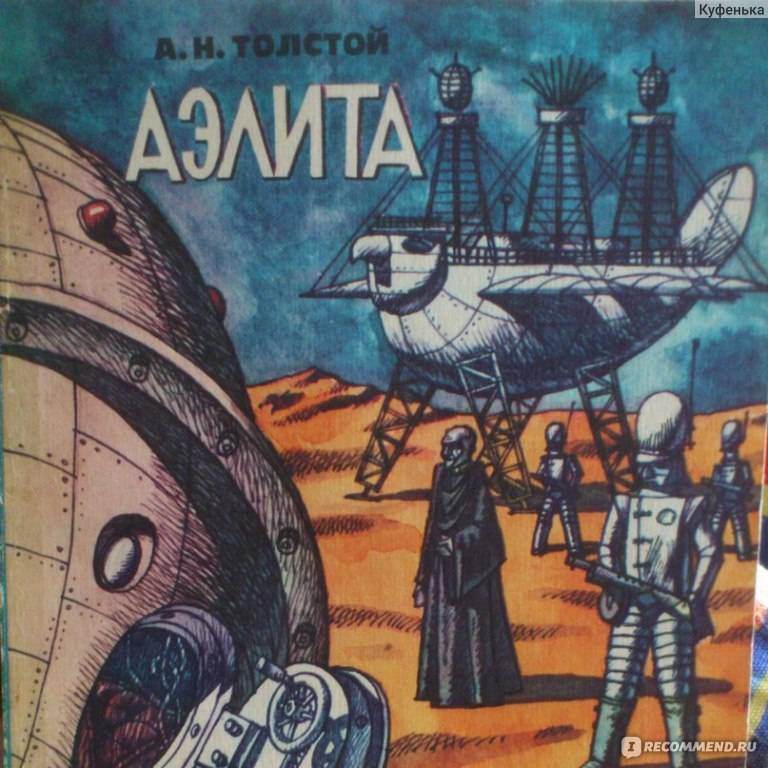 Since Aelita has been published many times, there are such covers among its covers
The first thing that came to the mind of the Zenov was to compare the described “Martian assault rifle” with the Degtyarev submachine gun created by him in 1929. It had a perforated barrel casing, a handle for easy holding from the bottom, and a disk magazine mounted on top of the receiver. The receiver was similar to the DP machine gun box. The shutter handle with a classic ball at the end (drilled for relief) was on the right. The stock and butt are wooden. The submachine gun was equipped with a fire translator, and could fire both single shots and bursts. Moreover, the fuse and translator were separate parts and were on different sides of the receiver. The aiming plate, combined with the store’s receiver, was designed for shooting up to 200 m.

The rate of fire was very large - 1000 rounds per minute. But different sources write differently about the store’s capacity, you can find both 22 cartridges and 44. There are, of course, few cartridges for a disk store, especially with such a rate of fire.

Experienced 1929 Degtyarev submachine gun
But here just the first contradiction arises. The eye sees what it sees, while what it sees is first noted in detail. And having looked at this automatic machine, we, too, first of all would have noted precisely this: “with a store on top”. Above, but not in the middle, as is written in a novel by Tolstoy! And similarly, PPD and PPSh are not suitable as relatives to the “Martian assault rifle” - their stores are located below. Yes, maybe they are just in the middle, but from below, and the Degtyarevsky PP store is clearly from above. Here’s such a “trifle”, and look what an interesting riddle the author posed for us: how to position the store on a submachine gun so that it looks purely visually on it in the middle and at the same time works.

First, I remember that a long time ago it occurred to me: the store at this machine, of course, should be round, disk, and put on it from the barrel, for which it should have a central hole. And so that he, speaking beyond the dimensions of the barrel, does not interfere with the aim, all sights are mounted on it along the receiver. I hadn’t seen the M16 rifle and its sight, combined with a carrying handle, at that time, otherwise I would probably try to make myself such a “Martian assault rifle” for playing war, taking as a store a large can of pickled herring - It would probably come out very cool. But time passed, the past was somewhat forgotten, but I read the indicated material, and immediately everything was remembered, as if it were yesterday. And I thought: what would an automatic machine for Aelita still look like if we would begin to film this film today? So that he could shoot and reflect the culture of the Martians - all their favorite spirals, described in the novel by A. Tolstoy. 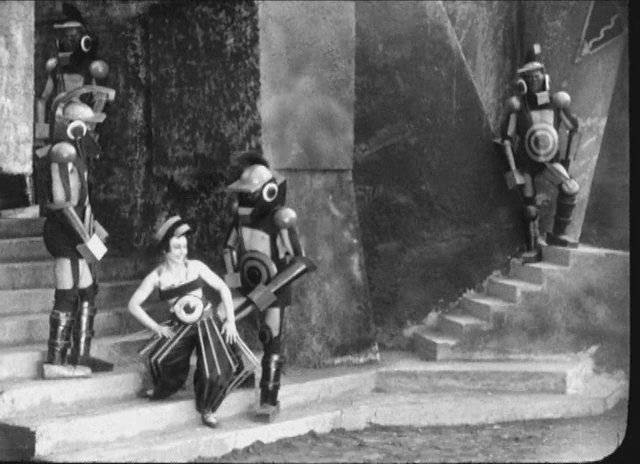 Ihoshka and Martian soldiers next to her - a complete horror for 1924!
Let's start with the main thing - the barrel, receiver, butt. Everything is simple, there is nothing to be wise: the casing is round in cross section, like the PPD, there are many perforated holes, the receiver is in the form of a pipe with a shutter handle on the right or left, and the butt is of a classic rifle shape, because they invented nothing better. There is an illustration from one later edition of Aelita, which shows a Martian with this “gun”, equipped with a PPD / PPSh type magazine, and a tube butt. Well, in principle, you can put such a butt on our weapons, why not?

Here it is, this illustration ... Poor fantasy of the artist. Poor thing! I could have come up with a better butt, if I had already put a PPSh store on my machine gun!
But, of course, the highlight of the whole design will be our store. It has the shape of a through disk of a sufficiently large diameter, so that through it you can look and aim. Nothing prevents this. To provide him with a rigid mount on the machine, three U-shaped stops are provided, one of which is a U-shaped store receiver with a latch, and the other two are located - one on the handle on the bottom, which provides the arrow with a comfortable hold on the weapon, and the other on the right on the additional a handle that, say, a Martian left-hander could use when shooting, if they have one. Moreover, it can be made folding, so that in the stowed position it does not interfere with the arrow. Inside the store there is a spiral "process" through which the supply of cartridges is carried out, and which just goes into the neck of the receiver. 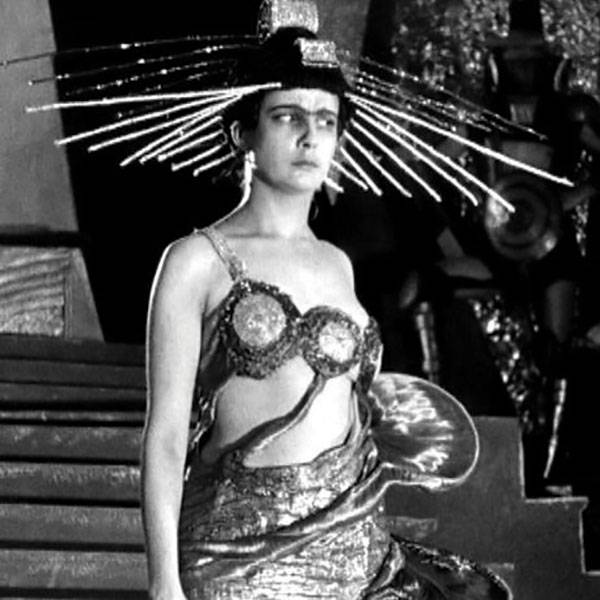 Beauty Aelita!
A sufficiently large radius of the store allows you to conveniently place the cartridges inside it in a checkerboard pattern, that is, increase its capacity and ensure their reliable supply, since inside such a “snail” the feeder spring will work best. Snail shops began to be installed on Parabellum pistols during the First World War. They fit 32 cartridges, but the spring had to go through a special bend, which, of course, did not add reliability to the feed. Subsequently, the first "real", so to say, MP-18 submachine gun was equipped with such a snail shop. However, he “didn’t go further”, and precisely because of his low reliability. 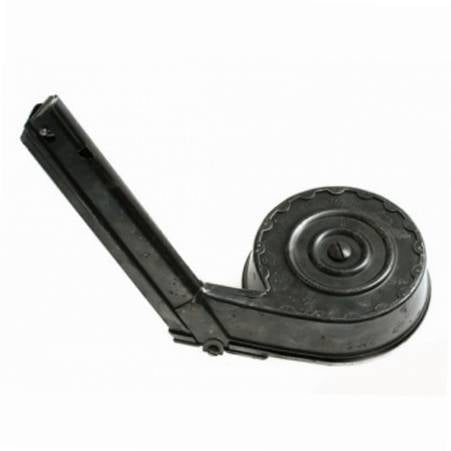 Shop snail from MR-18
Well, in our Martian submachine gun the spring will be very comfortable, so that delays due to it on it can be completely eliminated. For convenience, the magazine lock control key can be placed in the back of the receiver under the thumb of the right hand. Well, the magazine is removed and put on through the barrel with the left hand, while the right submachine gun would be held by the neck of the butt. The back wall can be made of transparent plastic, which would make it possible to visually control the consumption of cartridges, which in such a store, and even a small "Martian caliber", could be more than a hundred ... 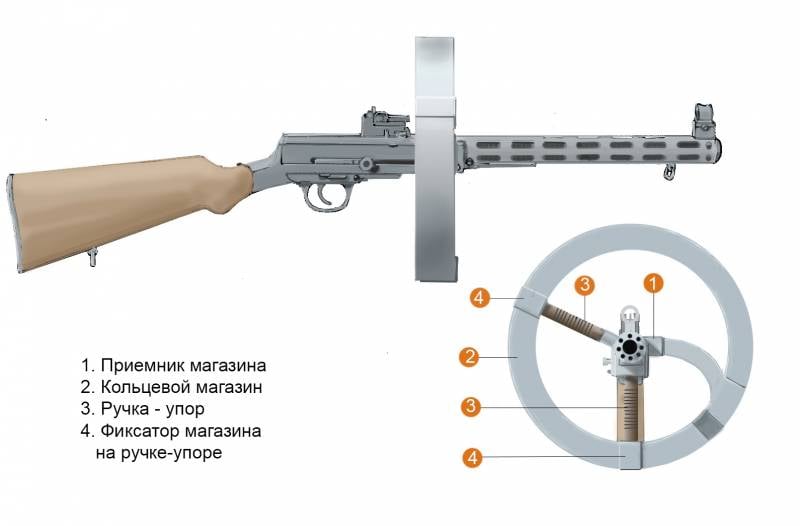 Our Martian machine with a disk store in the middle. Fig. A. Sheps

One can argue, of course, that with such a store, the dimensions of the weapon are significantly increased. But Martian soldiers fired from such “guns” over the sides of their flying ships, so that would not hurt them!

And it seems to me personally that we got a good gymnastics for the mind, and besides, suddenly some of our director is really captivated by the beautiful Aelita, and ... by our machine gun! And finally he will make a feature film worthy of modern technology based on this novel.

We are in Yandex Zen
Guns 12 caliber with the possibility of automatic fire
Domestic anti-tank guns
97 comments
Information
Dear reader, to leave comments on the publication, you must to register.