How to solder the Russian people 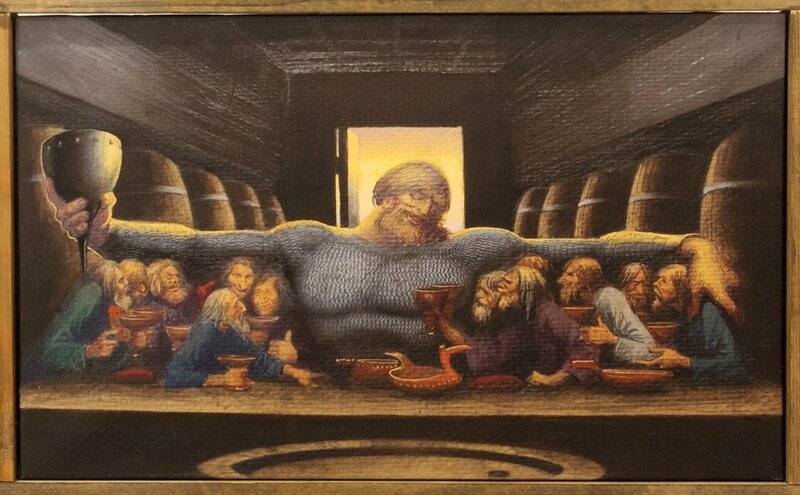 The fight against alcoholism in Russia has centuries history. The first sermon in Russian history on this subject, “The Word of Drunkenness,” was compiled by Theodosius of the Caves in the eleventh century. It said that through alcohol consumption, a person drives away a guardian angel and attracts a demon. Alcohol is one of the weapons of genocide directed against the Russian people.

From the history of alcohol

Alcohol has been known to mankind since ancient times. This is an Arabic word. Sometimes this word is translated as "most elegant, volatile and delicious." But the correct translation is "alcohol." The beginning of targeted production of fermented products containing alcohol (alcohol), many historians attribute to the time of the Neolithic revolution, the transition to manufacturing (agriculture), that is, about 10 thousand years BC. e. In ancient Egypt, Mesopotamia, Palestine, Greece, Rome and China, alcohol was produced and consumed.

Already in ancient times, the negative effect of alcohol on the physical, intellectual and spiritual health of a person was noted. In Ancient Sparta, the stronghold of the cult of warriors, there were lessons of sobriety. The young men were seated at a table lavishly laden with food and wine; on the contrary, they planted slaves; they overeat and got drunk. So they worked out an attitude of disgust for gluttony and drunkenness among young Spartans. In the rest of Ancient Greece and Rome, they preferred to drink diluted wine (with an alcohol content of 2-3%) and only after 30 years, when healthy offspring were already born. Violators of the ban were expelled from the clan. And on his grave they could write: “He lived like a slave - he drank undiluted wine!”

That is, strong, undiluted wine could be drunk only by slaves, because drunk, addicted people are easier to manage. “You don’t need a knife for a drunkard, / You’ll pour a little for him, / And do what you like with him!” The corresponding conclusions suggest themselves. Already since ancient times, alcohol is a method of management and weapon genocide aimed at the dependent population, slaves (consumers). It is clear that during the decay of the ancient states of Greece and the Roman Empire, these prohibitions were forgotten, and the gentlemen in their behavior were equal to the corrupted slaves.

In ancient times, the extremely negative effect of alcohol on society and the state was noted. In ancient India, women who drank alcohol were severely punished. Alcohol was banned by a whole civilization - the Muslim world. In ancient China before BC e. there was a decree of the emperor, which was called the "Notice of drunkenness." He said: “Our people are extremely licentious and have lost their virtue, which must be attributed to intemperance in the use of intoxicants. Meanwhile, the destruction of states, large and small, occurred for the same reason - due to the use of these products. " The drunkards were threatened with the death penalty.

The drink of the gods

At the same time, alcohol from ancient times was part of the spiritual culture of people. In Latin, the word "spiritus" has two meanings - spirit and alcohol. Alcohol allowed a person to go into another state of consciousness, in a trance, to cross the boundaries of the ordinary. All over the planet, grape and palm wine, berry juices and milk were used to create the “drink of the gods." The priests were engaged in this, who were introduced to the world of the gods.

As a result, these drinks were of cult significance. They were used only during the most important holidays (summer and winter solstices, spring and autumn equinoxes), in the most solemn and significant moments of human life. For example, during a feast - a feast in memory of the deceased.

For many thousands of years in Russia, this tradition has been preserved. Russia did not know any other drink except pure water, marmot (an infusion of various herbs in honey water that fermented in the sunlight), birch bark (from birch sap), kvass, beer and mash. These drinks then had a strength of not more than 1,5-3%. There was also a special honey product. Fruit juice was made from berry juice, then mixed with honey, poured into containers and kept for 5 to 25 years (sometimes up to 40). It turned out the so-called set honey. The strength of this product was already from 5 to 6%. This is a fairly strong and stupefying product. A very small amount was enough for the human consciousness to visit the "world of the gods." But more often than not, the usual mead was not subjected to fermentation and it was a soft drink.

That is, in the most ancient period, the Russian people maintained sobriety. During the Scythian empire, wine was brought from Greece. But it was used by an extremely insignificant layer of Scythian-Russian nobility, associated with coastal cities of the Black Sea. Most Russians consumed soft drinks and low alcohol during the great holidays (in insignificant quantities - 1 cup, that is, 0,12 liters) and significant moments of life. The gene pool of the Russian people was healthy.

Transition to Greek wine and the appearance of alcohol

After the process of baptism of Russia, a radical change in the cult drink took place, there was a transition to Greek wine - malvasia, and then Cahors. Communion of wine. The strength of the wine was already significantly higher than 11-16%. True, it was still far from soldering the people. Firstly, Christianity has been affirmed in Russia for centuries. Wine was an expensive treat. And he, like the intoxicating honey, was taxed heavily. That is, they were practically inaccessible to ordinary people. For centuries, wine was available only to a narrow layer of nobility and rich merchants (as in ancient Scythia). Thus, the sobriety of the people was preserved.

It is interesting that for the first time grape alcohol called “aquavita”, which means “water of life” (“living water”), was brought to Russia in the 1380s. During the reign of Dmitry Ivanovich Donskoy. Genoese merchants who had trading and military bases on the lands of Byzantium and in Crimea brought "Water of Life". Grape spirit at the princely court did not make much impression. Russian people are used to consuming honey.

Italian merchants (Genoese, Florentines), Greek and Russian clergy began to import alcohol into Russia en masse in the reign of Ivan II of the Dark (reigned intermittently from 1425 to 1462), when Russia was engulfed in civil war.

Thus, a kind of revolution is taking place in the drinking culture of Russia. Earlier, drunken drinks were part of the cult communion, a person’s involvement in the “world of the gods. Its use was a rare, exceptional moment of the rite. The priests gave honey for free during the holidays. Then, hoppy honey became an export product and a monopoly of the state, ordinary people almost did not see it (like wine, because of its rarity and high cost). Now, the former sacred drink was becoming formally public and non-sacred. Moreover, before the cult drink was in the hands of the priestly class, the Magi. Now it was owned not only by the Christian clergy, but also by an imperious and wealthy stratum. And now alcohol could be consumed at least every day, if there was an opportunity and means.

Alcoholic products with a high alcohol content, such as vodka (up to 40 degrees or more), appeared in Western Europe in the 1552th century, and in the XNUMXth century, vodka penetrated the Russian state as well. Since the middle of the XVI century, the production of vodka in Russia has been established at special distilleries. Sovereign Ivan Vasilievich in XNUMX founded the first Russian tavern. It was opened in Moscow only for the guardsmen. But when he began to bring noticeable income to the treasury, such taverns opened up people for other things.

At the same time, a farmer appeared, in which the state transferred the right to create taverns to private individuals (farmers) for a fee. The farmers, having bought this right, set the prices and sales volumes themselves. This right was granted to representatives of the clergy and nobility. They created a system of mercantile taverns that existed along with the royal ones. It was a very profitable venture. The raw materials were very cheap, there was usually plenty of bread in Russia, the finished goods tens and hundreds of times blocked the cost of raw materials. Vodka was convenient in transportation, it was well and long stored. The product is compact and well divided into parts. Thus, an extremely profitable business appeared, and a small social layer was enriched by soldering part of the people.

The supreme supervision of the sale of wine and vodka in taverns was first entrusted to the tsar's governors, then he was under the jurisdiction of orders that controlled the regions. For this, in 1597, a special institution was created in Moscow and the cities assigned to it - a new couple (a quarter). By decree of 1678, a new quarter was transformed into the Order. This was the first state monopoly. Under Alexei Mikhailovich, the taverns were run by the Order of the Grand Palace and the Order of the Big Treasury. Faithful kissers and heads, mainly selected from trading people and people of the “first articles,” or vendors, sold alcohol. Under Peter the Great, they were replaced by tavern bourmisters, who were subordinate to the bourmister chamber.

Strong wine and vodka began to have a devastating effect on society and the state. Vodka destroyed the moral, cultural and social foundations of society. For example, at this time, a special layer of kabatsk drunks appears (kabatskiy gol, kabatsk yarzhki), whose whole life was reduced to raising funds for a drink. Classic: "Stole, drank, to prison!" Of these, detachments of thieves-robbers, the Posad "bottom", were formed, ready for any crime for the sake of a bucket of vodka.

From this moment begins the confrontation between Russian society and the authorities, who believed that alcohol is primarily a profit. For example, in Russian folklore there is a strong image of Ilya Muromets (all the epics of the XV – XVII centuries, where Ilya Muromets is mentioned), which smashes the tsar’s taverns and treats the loosestrife. The church at that time also actively opposed the drinking of the people. However, the state believed that alcohol was a high income. Therefore, the kissers received instructions: “Do not drive the drunk from the tsar’s taverns and donate the circle collection to the tsar’s treasury against the past with a profit.”

Financial abuses of cabal heads, a sharp decline in the quality of vodka, devastating consequences of drinking for the people (usury and even crop failure) led to “cabal riots” in a number of Russian cities. As a result, Tsar Alexei Mikhailovich in 1649-1650. convened Zemsky Cathedral (Cathedral of taverns). An attempt was made to reform the drinking business in Russia. So, it was forbidden to sell bread wine (vodka) on credit, which led to the enslavement of people; private and secret taverns were liquidated; agitation of the church against drunkenness intensified. At the suggestion of Patriarch Nikon, it was decided to sell only one glass of alcohol per person 4 days a week, and stop selling altogether one hour before the start of the mass. True, such half measures did not last long. Only a few years passed, and everything returned to normal. A resolution was issued by which the widespread sale of alcohol was allowed, "so that the great sovereign could make a profit for the treasury." So in Russia was born a "drunk" budget.

We are in Yandex Zen
Chernobyl notebook. Part of 3
The last emperor of the united Roman Empire
223 comments
Information
Dear reader, to leave comments on the publication, you must to register.