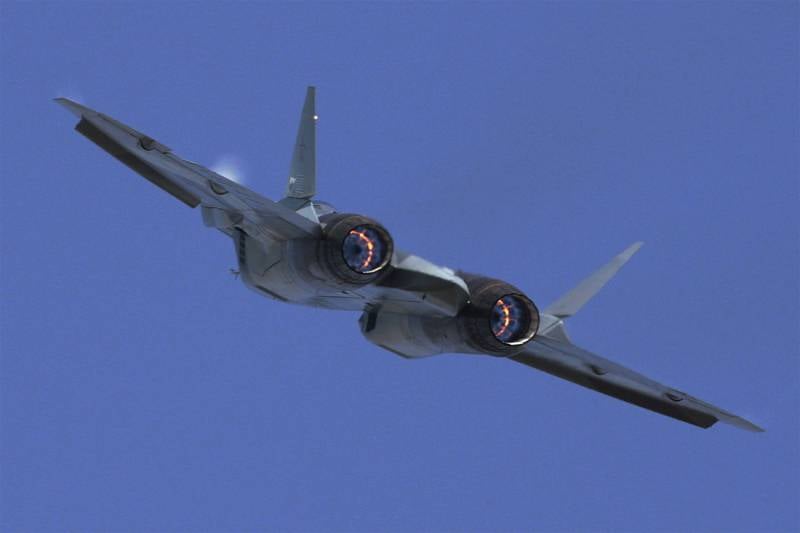 The foreign press pays great attention to the new generation Su-57 Russian fighter, more often in a negative way. The myths about the aircraft repeat each other, and their main goal is to discredit a serious competitor of American fighters.


Fears about the creation of a fifth-generation fighter in Russia are interspersed in foreign (not only American and European) media with constant search for shortcomings and weaknesses that you can cling to in order to once again wreck the Su-57 and the Russian aircraft industry as a whole.

The real “balm for the soul” for the United States and its allies was India’s refusal to purchase Su-57, although initially the Indian leadership was going to be very active in a joint project with the Russians to create their own fighter based on the Russian one. At the same time, the Western press refers to the opinion of the Indian military.

The sources of criticism of the Russian aircraft, according to media reports, is Marshal aviation India Simhakutti Warthaman, responsible for the implementation of the FGFA project. It was the Indian military who formulated the main claims against the Su-57, which are now being circulated in the Western media.

Lack of a modern engine

In the popular publication The National Interest, analyst Dave Majumdar writes that the Su-57 fighter has 2 temporary dual-circuit turbojet engines with an afterburner AL-41F1 of NPO Saturn. In fact, Majumdar emphasizes, these are the same engines that were installed on the existing Su-35S fighter. In the West, the engines used in the Su-57 are considered obsolete, not meeting the standards of the fifth generation aircraft.

Therefore, the Indian military said that in the framework of the Advanced Multirole Combat Aircraft (AMCA) project to create a fifth-generation combat aircraft for the needs of the Indian Air Force, New Delhi will use American, French or British engines that have the "best" characteristics.

The stealth technology in the Su-57 also claims. The Indian military said that Russia only created a certain appearance of using stealth technology on the Su-57, and in fact, the fighter is not so invulnerable to the enemy’s aviation and air defense. About the fact that the desire to minimize radar visibility inevitably affects the flight characteristics of the aircraft, of course, not a word. But the Indians considered an insufficient level of invisibility to be the reason not to attribute the Su-57 to fifth-generation aircraft.

In India, they were also dissatisfied with the Su-57 missile weapons, which, according to Indian military experts, do not have sufficient accuracy. The Indian command did not like the radar equipment of the Russian aircraft, which was also considered obsolete and did not meet modern tasks.

Also in India and in the West, they drew attention to the lack of intelligible production of the Su-57. Now there are only prototypes of the fifth generation aircraft, and one of them not so long ago crashed in the Far East. The latter circumstance, of course, was a serious blow to the image of the Russian aircraft, but the Western press and the Russian liberal publications echoing it inflated this event to an incredible scale and had already predicted that no one would buy the Su-57 from Russia at all.

They also like to speculate about financial problems that Russia supposedly will inevitably face in deciding to launch serial production of the Su-57. Meanwhile, at the prices of the global aviation market, the Su-57 is very cheap, almost at the level of fourth-generation fighters. Naturally, many countries are interested in acquiring such an aircraft for such money, and if India decided to refuse the contract, then this is its problem - let it overpay for American companies.

Interestingly, when in December 2019 there was information about the upcoming signing of a contract for the supply of Su-57 to Algeria, foreign media immediately rushed to express their strong opinion: Algeria will not become the first buyer of the Su-57, since it died of a heart attack on December 23, 2019 79-year-old Major General Ahmed Hyde Salah, who served as chief of staff of the country's armed forces and was considered the main "lobbyist" of the acquisition of Algeria Su-57.

It is clear that there are problems with the implementation of the project. But something else is important here. Foreign media openly use any pretext, any event even indirectly related to the Su-57 (such as the death of an Algerian general) to once again criticize the Russian plane. What to do, the fight for the buyer in the global arms market is becoming increasingly fierce, and criticism of the Su-57 is also a component of the general information war against Russia.

We are in Yandex Zen
27 air battle February 2019 of the year over Kashmir. There are more questions than answers.
Situational analysis of the death of the MH17 flight (Malaysian Boeing 777), made on the basis of engineering analysis from 15.08.2014
52 comments
Information
Dear reader, to leave comments on the publication, you must to register.