Castles and ancient settlements of Lloret 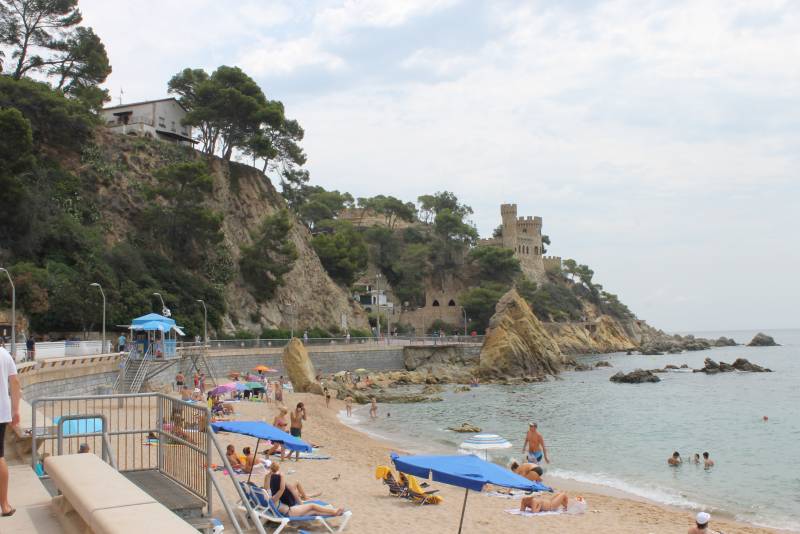 On the right is the castle-remake of the Senior Plaza, and a little to the left and higher is the ancient Iberian settlement of Turo-Rodo

In the deep gorge of Darial,
Where the Terek rummages in the darkness,
The old tower stood
Blackening on a black rock.
M.Yu. Lermontov. Tamara

Castles and fortresses. We met Maritime Museum of the Spanish Town on the Costa Bravo Lloret de Mar, but the interesting places of this town by this museum are by no means exhausted. Most of those who come here, their main attraction, it seems to them, is a castle on a rock, they see directly from the promenade and go to him in the hope of exploring it. Moreover, it looks very colorful: the battlements on a steep cliff, everything is just like in a movie. And what is their disappointment when, when they get to the entrance, they are in front of the entrance to a residential building owned by a private person. 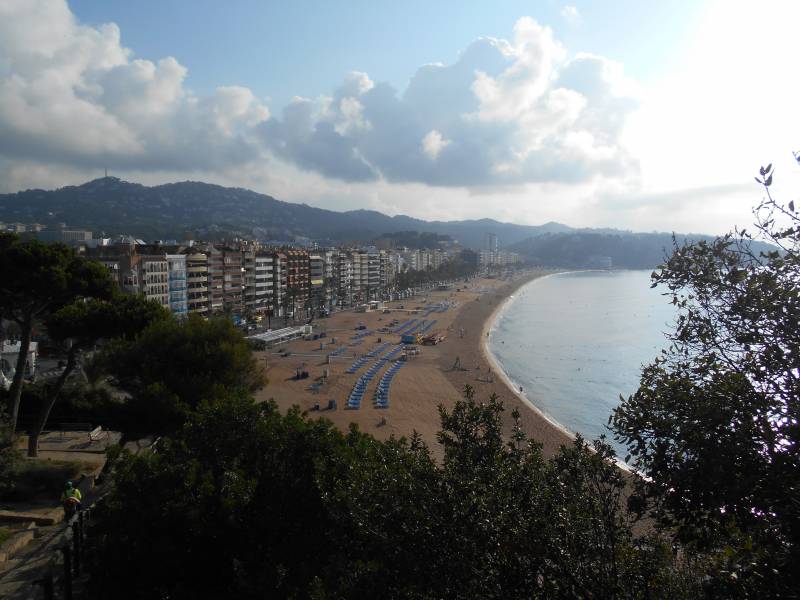 Beach of Lloret de Mar
It's a shame, but nothing can be done!

This is a typical and, by the way, a very beautiful castle, which is visible from anywhere in the main city beach, but this is a remake. On a rock at the very end of the beach of San Caleto, he was ordered to build by Narsis Plaza, a wealthy industrialist from Girona in 1935. However, a civil war broke out, and construction lasted for years. However, when the war ended, the castle was completed. And although it is closed to visitors, it has become a real tourist symbol of Lloret de Mar, known throughout the world for postcards and photographs taken by tens of thousands of tourists who come here to relax. 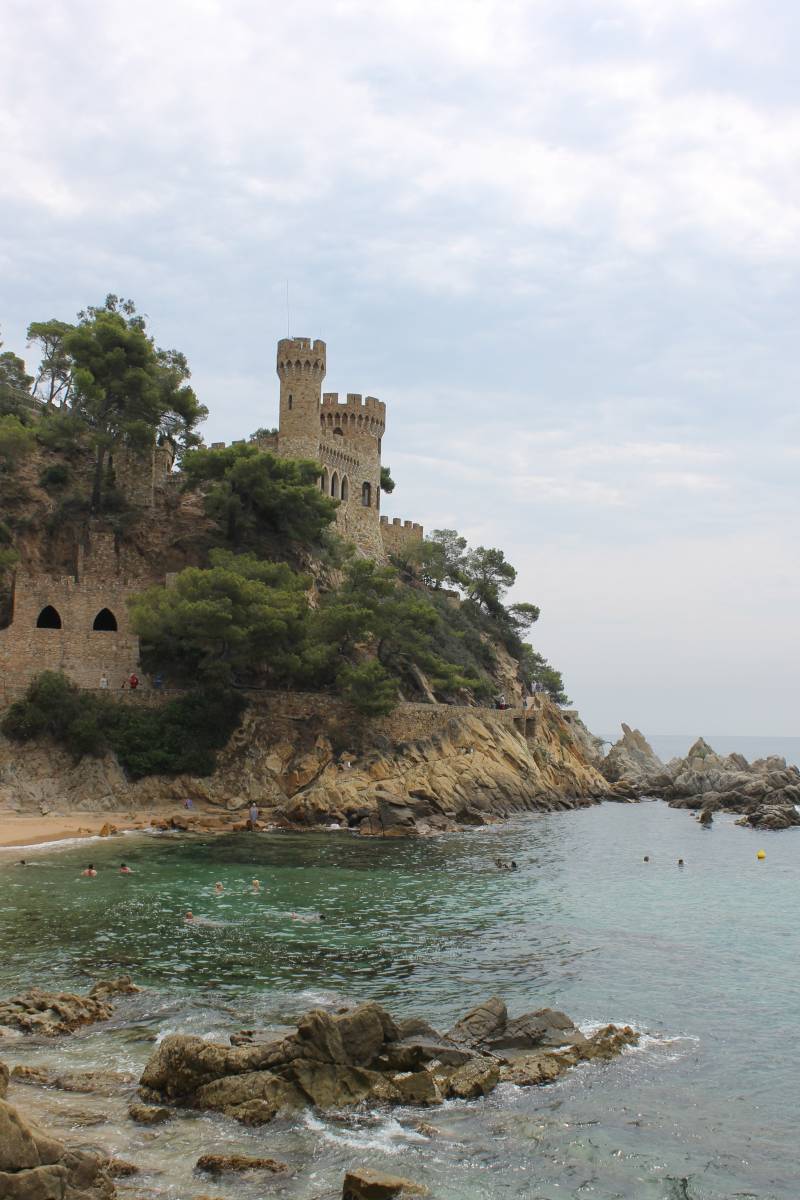 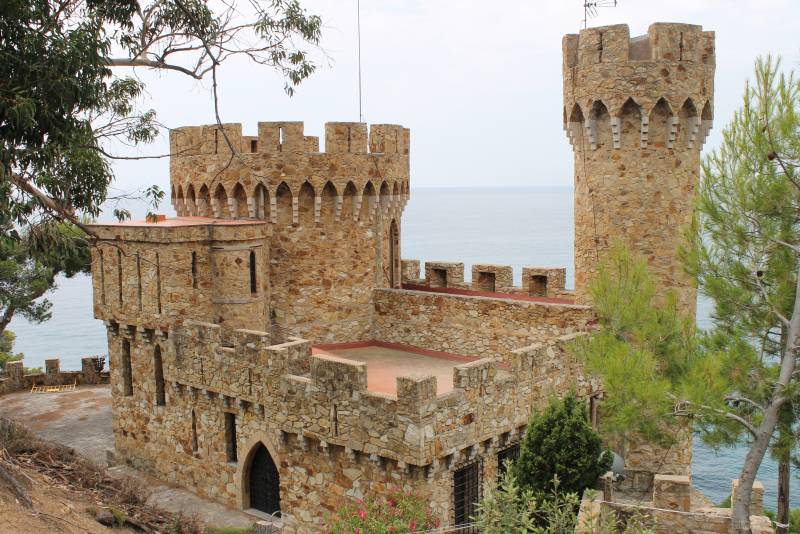 View of the castle from above. It is obviously small, but it looks very comfortable.
It should be noted that around the castle and further there is a walking trail along the sea. The views from it are simply magnificent, and after going through it all, you can visit all the Lloret beaches one by one, more delightfully than the other, but since we are interested in two things - castles and ancient settlements, we will not go along it, but not reaching the “castle” of Narsis Plaza , turn left and go straight and then right. Higher and higher, and we will end up right above his "old castle", where there is a very interesting place - the archaeological park, the ancient Iberian settlement of Turo Rodo, and from below, it is also visible from the beach, but its buildings merge so well with rock that consider that this is something interesting (if you do not use the map, of course!) from the bottom is completely impossible. 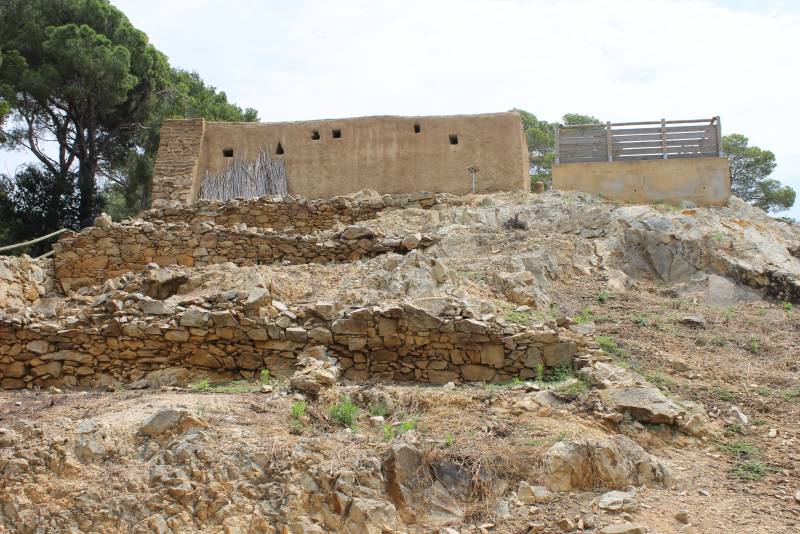 View of Turo Rhodes from below 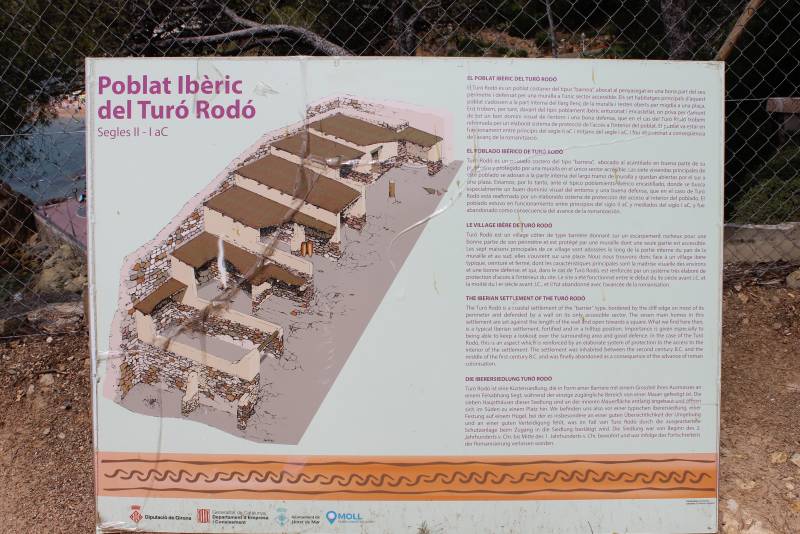 But so it was in antiquity 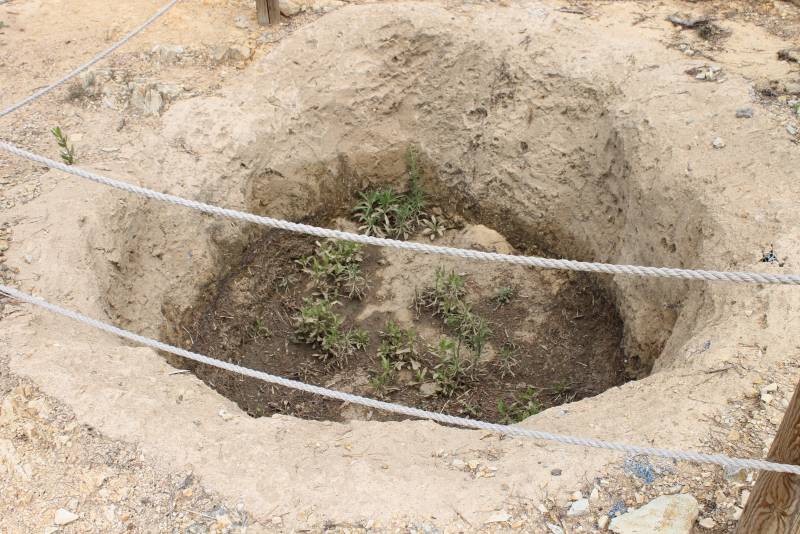 The remains of the grain storage pit 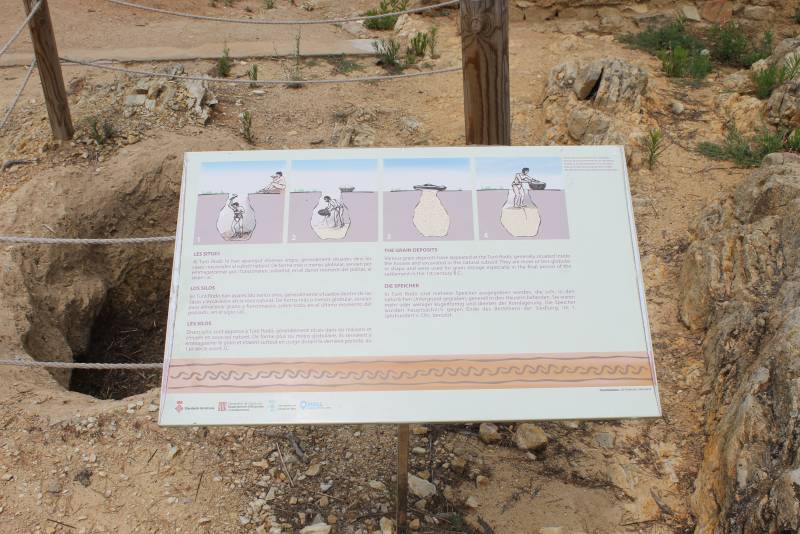 And so they used this pit ...
But if you went up there (better in the morning, then not so hot, but not earlier than 10.00), then you can visit the place of the fortified settlement of the ancient Iberians. People they were obviously very poor, but smart. They built a home in a completely impregnable place. The remains of the walls were preserved here, and on the basis of the foundations, one of the dwellings was reconstructed, together with all its utensils and household tools. You can enter the house, walk there, and imagine how people lived here and how much progress has given us. So the slogan “back to the ground” sounds, of course, beautiful, but before I advocate for it, I would advise its supporters to at least live here in such an Iberian house a little, take here the water from the spring below, go behind the brushwood for the hearth, and on a makeshift boat to swim for fish. But, of course, the view of Lloret de Mar from here opens up very beautiful, I do not argue. 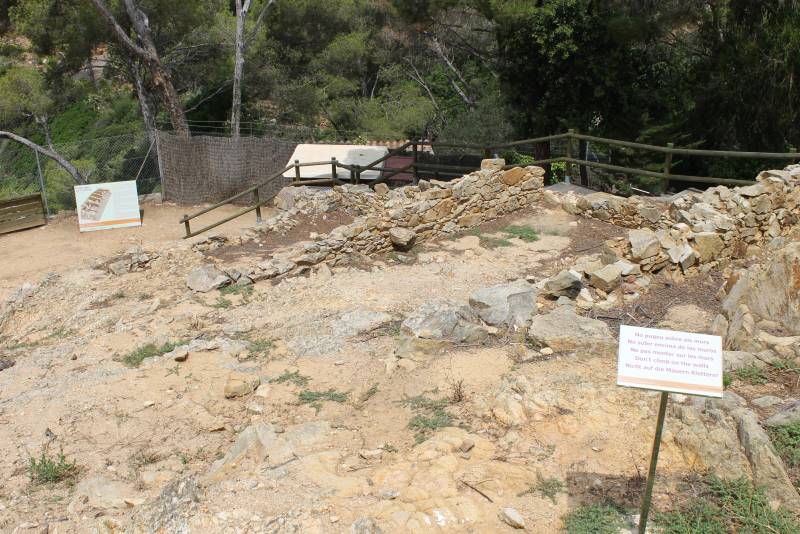 The excavation area is not impressive, of course 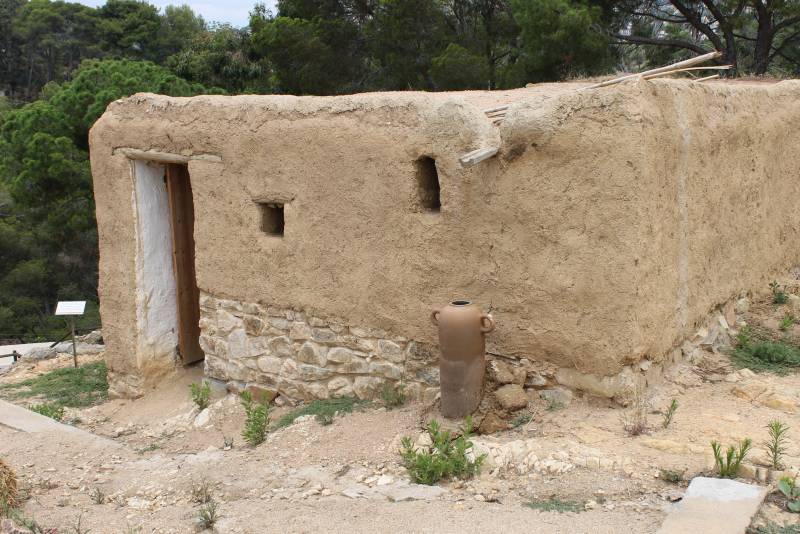 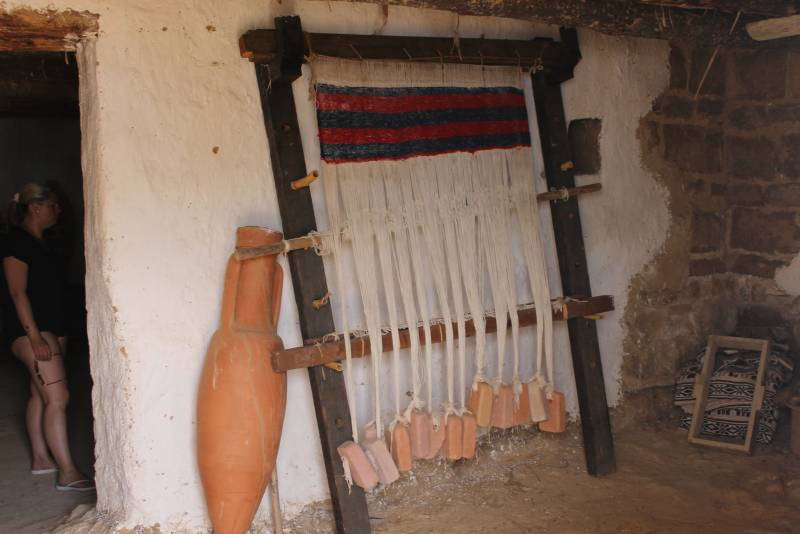 Inside view: amphora for oil and loom 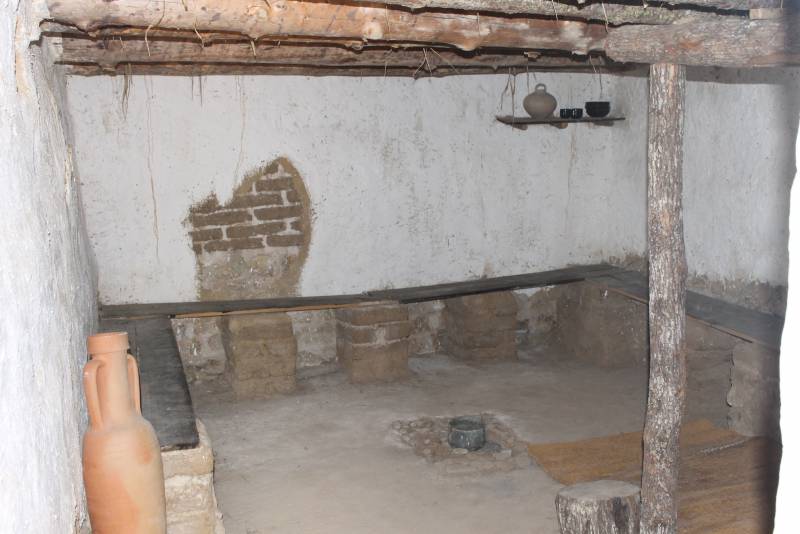 By our standards, a real bomber 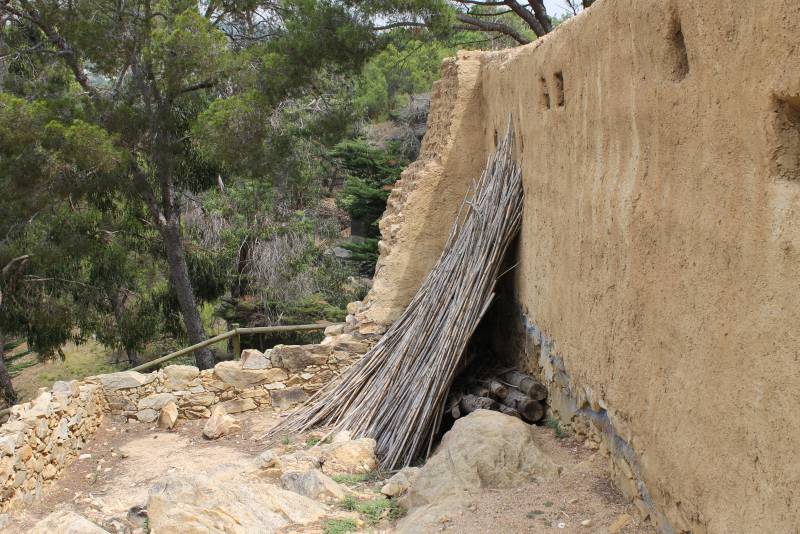 The roof was reed
By the way, this is the most affordable of the Iberian settlements of Lloret. There are two more, but they are on the outskirts and it is best to visit them in a rented car. Montbarbat is the largest settlement - an area of ​​5700 square meters. m. It is surrounded by walls and defensive towers.

Two kilometers from the city at an altitude of 197,42 meters above the sea lies the Puich de Castellat. This settlement was also fortified and excavations are being carried out in the same way, the exhibits of which are collected in the city archaeological museum. Which, however, cannot boast of the richness of its collections, so you can safely exclude it from the program of visits (believe my word - a waste of money and time!) However, the presence of three such settlements at once is not very far from each other tells us about the fact that in ancient times this area was densely populated, and the inhabitants of these places were engaged in fishing, and viticulture, and gardening, as well as grazing cattle and engaged in grain farming. But, it should be emphasized that all these places of excavation, as they say, "for an amateur" there are many pits that do not say anything to a stone specialist, although pedestrian paths with railings are equipped for tourists. 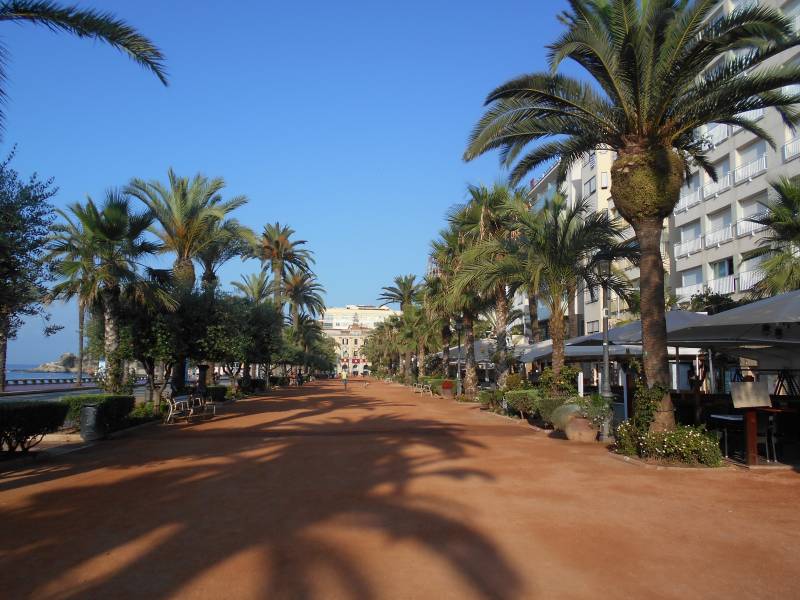 Now, standing on the embankment, you can turn to the right (before that we looked to the left), and then over the stone cape, overgrown with pine forest, you can see something like a tower and a flag developing above it 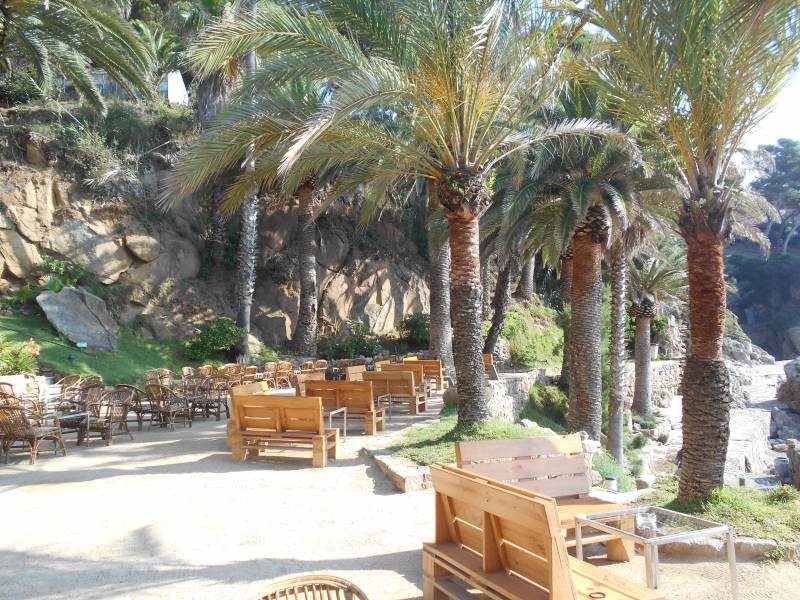 Going there is very nice. The places are beautiful. It smells of needles and the sea, and along the way you can sit here in this cozy bar overlooking the sea ...
But this is already more interesting, because there really is already a real castle, and not some, but built in the XI century! And there we are now heading. 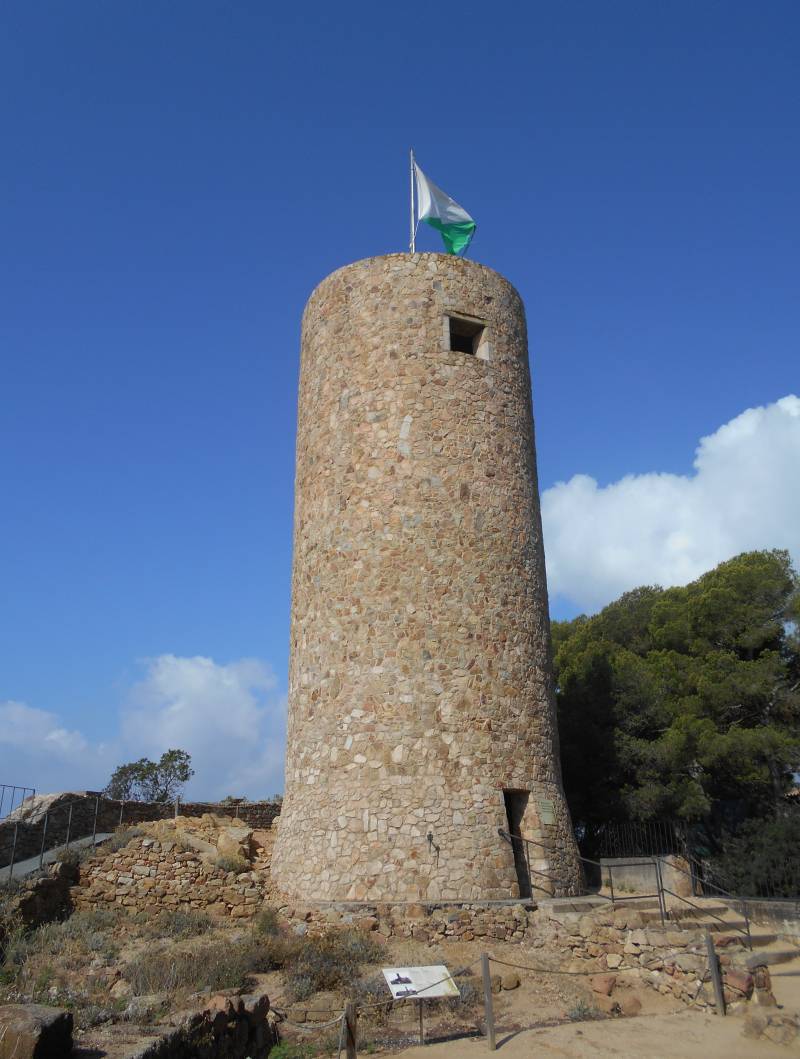 The main tower of the castle
It is named after St. St. John - Sant Joan (San Juan), and it is located on a cliff that separates the central beach of Lloret and Fenals beach. Interestingly, a castle with a central round tower that is almost exactly the same in design stands here on the coast in the neighboring town of Blanes, five kilometers to the south. That is, from these two fortified points, a considerable horizon line was observed and all the places on the shore most convenient for landing were monitored. Well, from them, of course, you could easily send a signal to the Palafolls castle (there was already material about it in VO: “San Juan and Palafolls Castle” (June 2, 2016), so that in case of an attack, help would come from there. 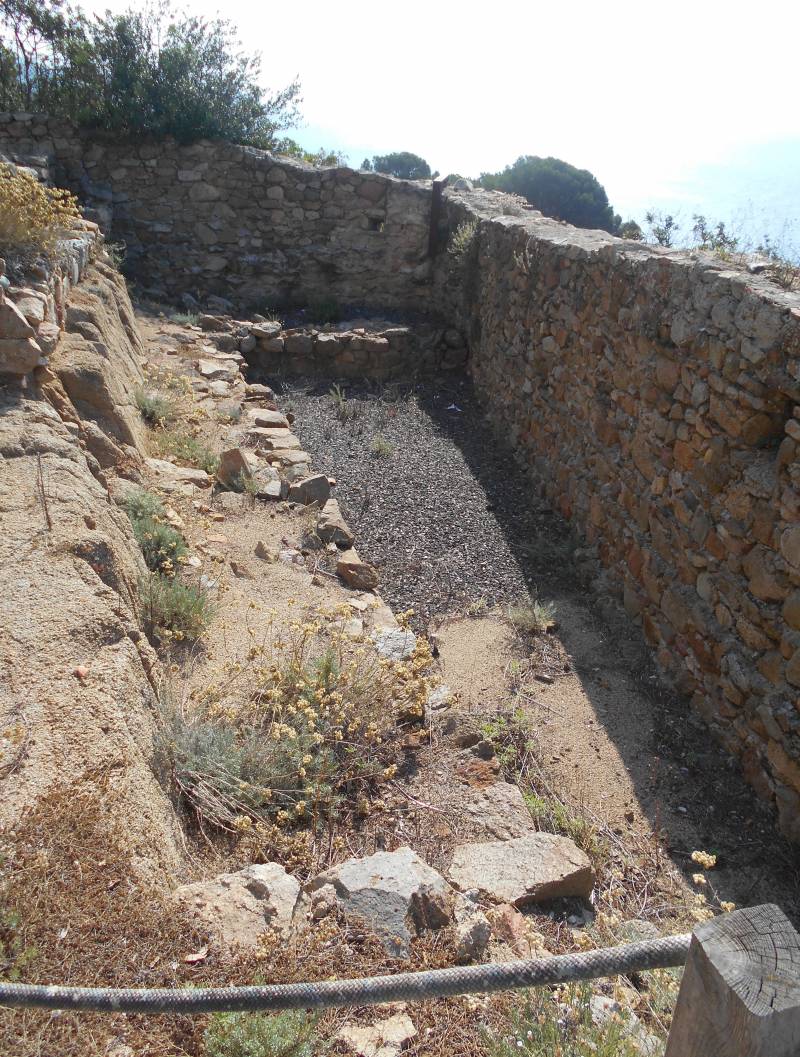 The remains of its walls
Getting there is easy. Behind the city hall building, you need to climb to the cape where the Lloretzians erected a monument to the fisherwoman - a massive lady of this kind, whom they clearly didn’t regret, badly cut, but tightly sewn, and obviously not Guttiere, and continue to walk along the sea going up the stone paths higher and higher and higher through a pine forest. The castle, also known as a museum, is open from 10.00 except Monday, and it is not worth arriving there too early. The excavation site, which is conducted around his tower, is fenced with an impressive metal fence, so that different types do not climb into his restored tower. 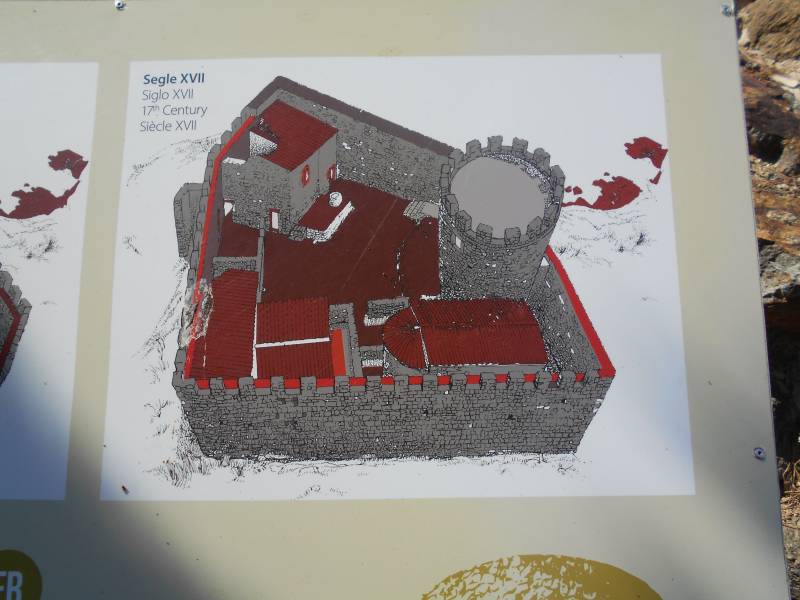 Reconstruction of the castle 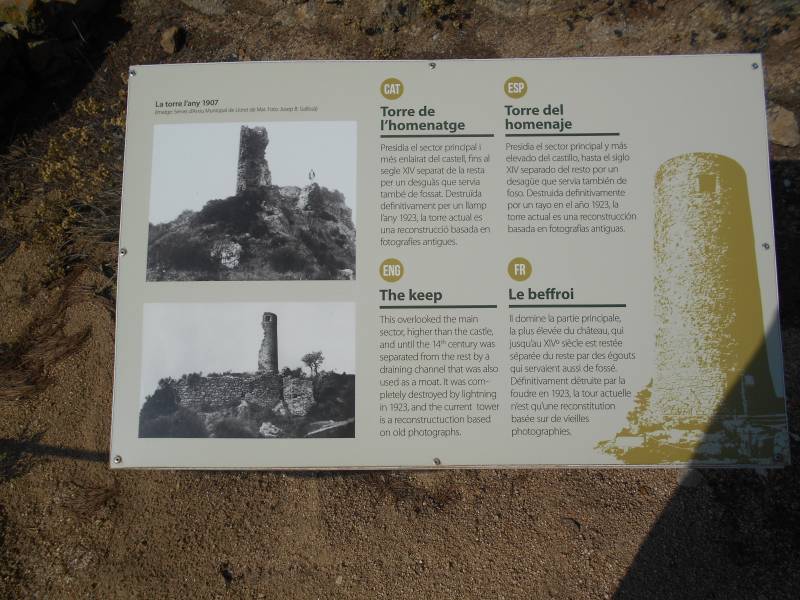 It looked like the ruins of the tower when it was restored
This very tower is the most interesting. It is known about this building that the chapel that was in this fortification was consecrated back in 1079, and if so, then this is the oldest medieval building of Lloret, not counting the chapel of De Los Alegres, consecrated in the same year. In 1208, the castle passed under the authority of a local bishop, and it is known that the inhabitants of the fishing village below have been hiding here from pirates more than once. 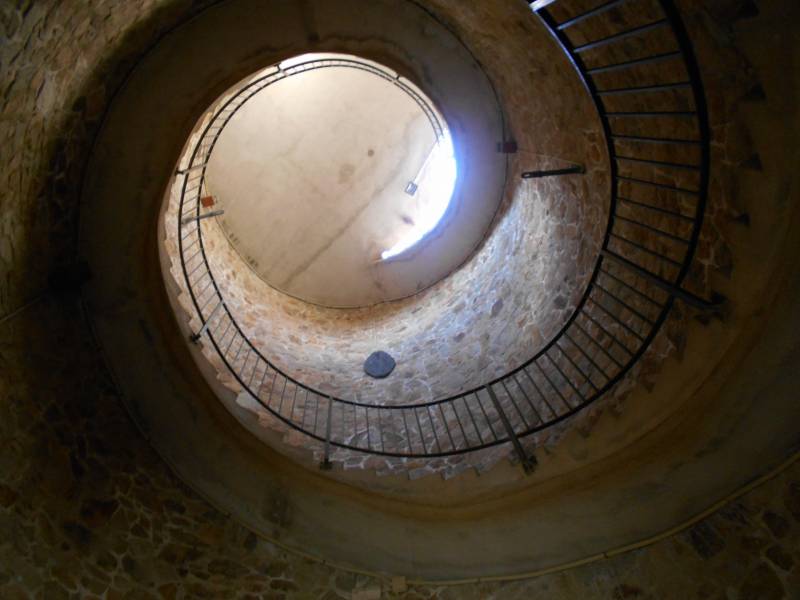 View of the stairs in the tower below 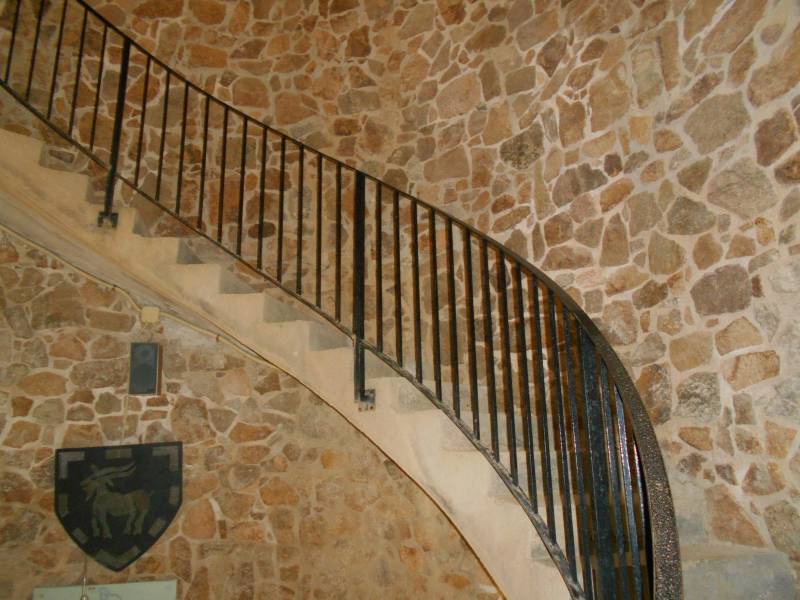 View of the stairs 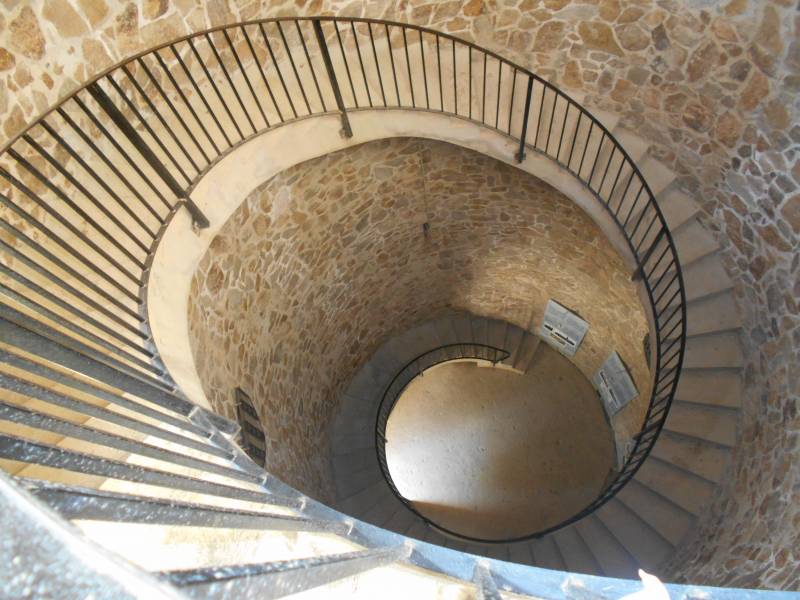 View of the stairs from above. Imagine that you are climbing it, hiding behind a shield and holding a sword in your hands ... 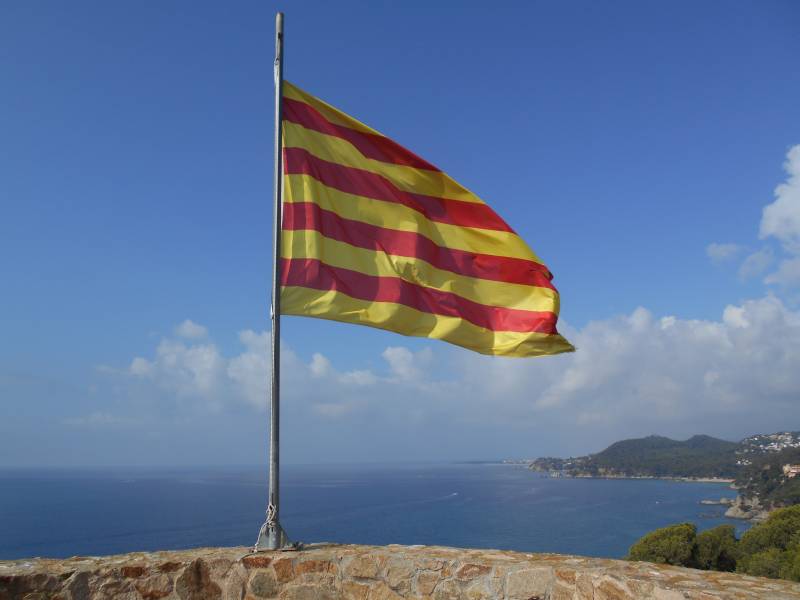 The tower develops Sannier - the flag of Catalonia. I had to wait a long time for the wind to dissolve it so beautifully, but what a shot!
According to legend, these four bands are associated with the name of Wilfred I the Hairy (840-897). According to legend, he fought with one of the kings of the Frankish state and received a severe wound. The king himself came to him and asked the count what he wanted as a reward for his courage. To this, Wilfred replied that the best emblem for him would be the coat of arms that the king would bestow on him. Then the monarch dipped four fingers into the blood of a knight and drew four stripes on the shield, which have since become the emblem of the Barcelona dynasty. However, historians have found that the first reliable mentions of this emblem refer only to the reign of Count Barcelona Ramon Berenguer IV (mid-XNUMXth century), and they began to use it as a coat of arms only under King Aragon Alfonso II (late XNUMXth century).

The Genoese tried to take the castle, in 1427 it was damaged by an earthquake, and at the beginning of the 1949th century, English warships fired on the castle tower and severely destroyed it. But in XNUMX, the remains of the tower were recognized as the cultural heritage of Spain and its restoration was begun. Today she looks like new, yes, in fact, she is. There is nothing particularly interesting inside, except for a couple of shields with emblems and stands telling about stories castle with a reconstruction of its appearance. But there is a staircase leading to the very top of this tower and you can climb up there. And there you will find a fresh wind rinsing the flag of Catalonia (well, what kind of flag could there be?) On the flagpole and beautiful views of the neighboring Blanes and exactly the same tower there and the city of Llolet de Mar, which will be seen from here on the palm. 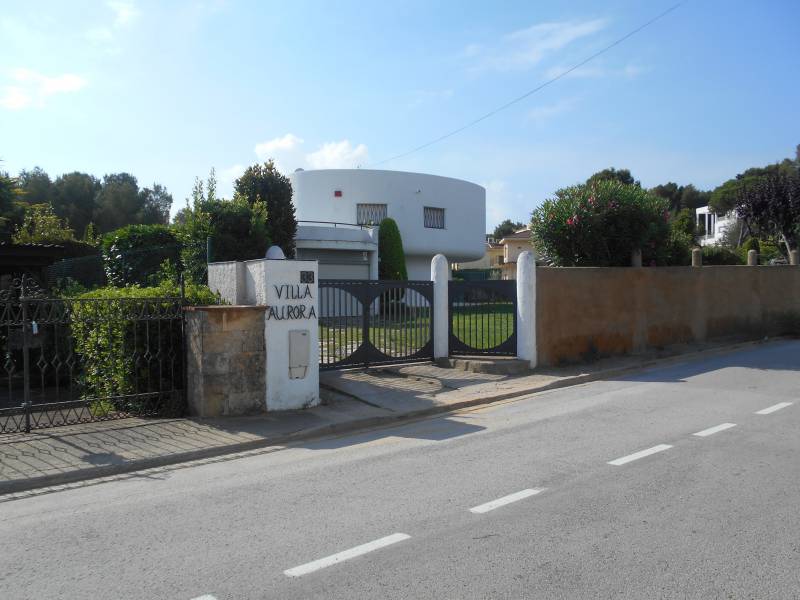 We go back past these pitchforks. Villa "Aurora" I really liked. I love such futuristic buildings 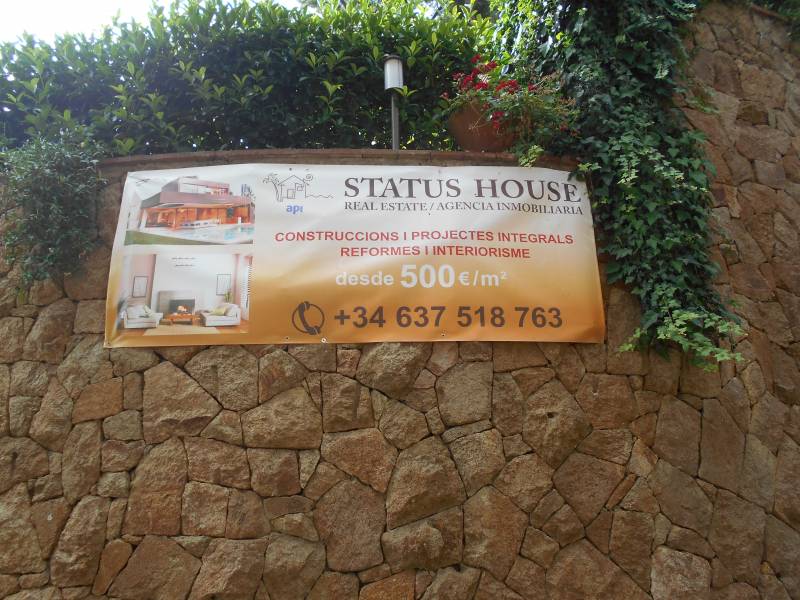 And many of them are for sale ...
That seems to be nothing special, but interesting. It is interesting to imagine how the warriors of the castle garrison kept watch on this tower day and night, how the first appearance of the enemy gave off smoke signals, how tanks full of crossbow arrows were fed into the hatch in the center of the floor on the cable. Climbing up stairs even with a railing is rather difficult - you feel dizzy, and it’s even harder to go down. And what if there was no railing then? And so, it was necessary. But only one warrior, standing at the top, could protect the tower from many enemies, it only cost him to push harder than the one who was the very first. However, the photograph clearly shows from what height he would have to fall down onto the stone floor. 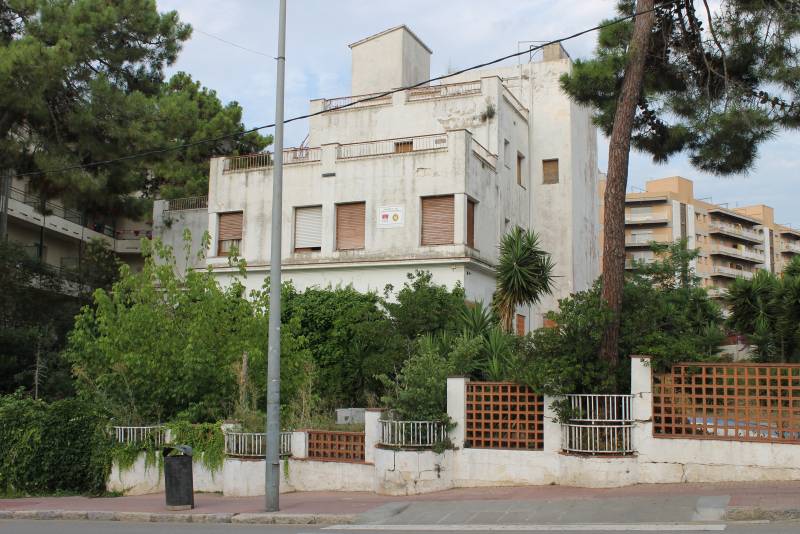 There are also such abandoned houses right in the center 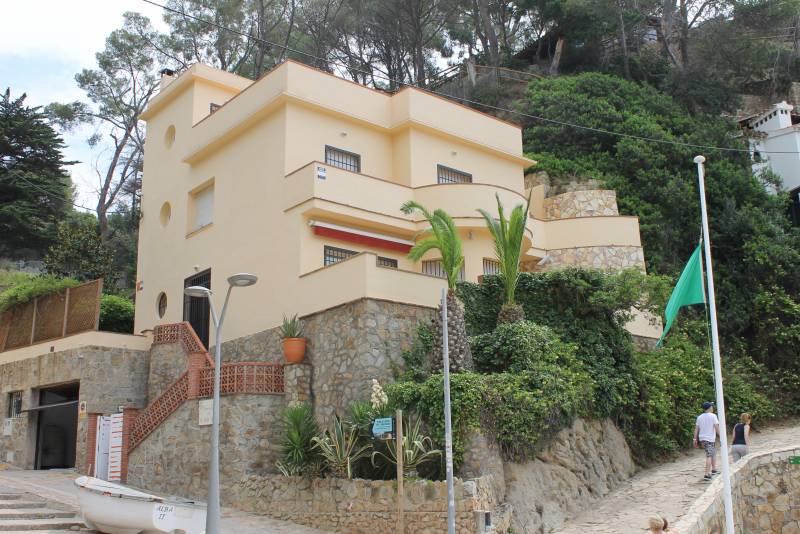 And next to them are new ones: like locks!
In Blanes, the fortification walls are in the best preservation, but in Lloret the tower was restored. Having visited both there and there, you can get a visual representation of how the castles of coastal defense on the Spanish coast of the Costa Brava, built in the Middle Ages, looked like.

Author:
Vyacheslav Shpakovsky
Articles from this series:
Chinon: castle of one of the wonders of the Orleans virgin
Chinon Graffiti - The Key to the Templar Gold