We are discussing amendments to the Constitution: Are we a federation or what ... 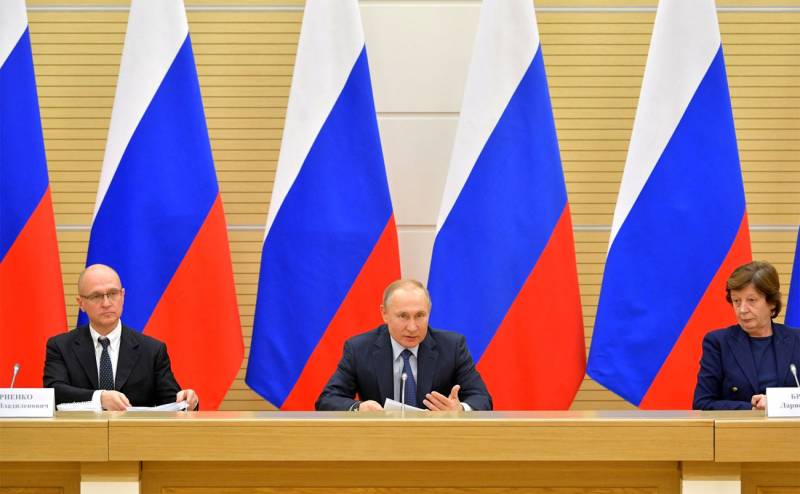 Society today is actively discussing amendments to the Constitution of the Russian Federation. To say that this came as a surprise to me, I can’t. Just because this activity is artificially stimulated by our media, our parties, government agencies and public organizations.


I recently participated in one such discussion. The bulk of the participants, as elsewhere, are probably politically active young people, mostly university students who are really trying to contribute to the creation of the new Basic Law of the Russian Federation.

And, as often happens among young people, most of the speakers did not broadcast their personal opinion, but the opinion of the organization or association to which they belong. And since I, by virtue of the presence of a gray beard, personified conservatives and retrograde cities for them, a lot of questions were addressed personally to me. They convinced me of the need to change the constitution.

Is Russia a Federation?

One of the most important issues was the question of the federal structure of our state. From where the wind blows, I understand. The guys from Navalny’s headquarters are quite active with young people. But even among fairly adult people, I have repeatedly heard talk about unhappy Russians who do not have their own state, their own territory. It seems like the small nations have their own republic, but the state-forming Russian people do not.

Indeed, the question of the structure of our state is rather complicated. It is complicated, first of all, because for most ordinary people the very concept of federation is rather vague. Many simply do not understand what it is. What is the difference between a federation and a confederation.

Agree, in the modern world of federations is enough. Studying the structure of these states just leads to a mess in the heads of students. Mexico, Brazil, Switzerland, India, Germany, Russia, the USA and many others. The name is one, but the essence of the state is different.

I understand that now someone will blame me for illiteracy. USA and Switzerland are confederations! Alas, the name does not matter. America was a confederation at the time of the creation of this country. Today it is a form of federation. And the states that were once part of the united state as independent countries are now only part of a single whole.

Is Russia a Federation? The answer is both simple and complex at the same time. Yes, we are a federation. Although, if you think about it, the federation is non-standard. As our venerable scientists say, an asymmetric federation. For a simplified understanding: the regions of the federation have slightly different rights.

The national republics in our constitution are actually called state entities, they have their own constitutions. Regions and territories do not have this right. There are only charters. Hence the talk of "we are in our land," "we will protect our land."

Features of the Federation in Russia

Let me remind you the basics of government. The subjects of the federation do not have state sovereignty! They possess only some signs of the state. I repeat, with some signs. The rest is recorded in the still existing Constitution of the Russian Federation.

Remember the principles of our association? State integrity, equality and self-determination of peoples, unity of the state power system, supremacy of federal laws, limitation of subjects of jurisdiction and authority, equality of subjects of the federation. Simply? Really simple.

It was these principles that served as the basis for a clear separation of powers between federal and local authorities. Again - from the current Constitution.

The RF is in charge of: foreign policy and defense, financial, currency, customs regulation, legal proceedings, criminal and civil law, and the publication of federal laws.

In joint jurisdiction are: protection of the rights and freedoms of citizens, issues of upbringing, education, science and culture, administrative, labor, family, housing law, coordination of foreign economic and international relations of entities, environmental protection, laws of subjects of the federation (mandatory compliance with federal laws).

A natural question arises: what can subjects do on their own? Alas, the creators of the current Constitution tactfully left the answer to this question. All other issues outside the jurisdiction of the Russian Federation ...

This question caused the most heated discussions among the participants. Most active young people have already encountered the traditional Russian “guys, there is no money in the local budget.” And there is always no money for everything.

For a young man who wants to do something really good, important for his own city, village, country, it sounds like a direct refusal of his help, from the young man or girl. It’s like “get out of here, without you doing things to the throat, we’ll do it ourselves”.

And after all they leave. And not only young ones.

Have you noticed how the attitude of people towards cleanups on cleaning or planting trees has changed? Veterans remember how residents of high-rise buildings went out in the spring to clean the lawns near the house, to repair children's swings or sandboxes in the yard. They went out themselves. Just because they saw that the neighbor had come out that the ZhEK had brought shovels and rakes and tree seedlings in the back of a standing truck.

Today, after a large number of years, I walk in the park in which I once planted several trees. I do not know if it’s “mine” whether it is birch or spruce. Maybe my school friend or girlfriend.

We then planted trees with a laugh, for our own pleasure. And is it important? It is important that here it is, a park that is perceived by young people for granted. "He was always here." I remember that “always” there was a deserted shore of the Irtysh!

What needs to be changed in the Constitution of Russia

Discussing any issue is important. Even with those who do not really have reliable information on this issue. It is important first of all for yourself. Thoughts are built into clear definitions.

A unitary state with a strong central authority that exists today under the guise of a federation - what is this? Why do we need a mask? It is time to officially consolidate the community of peoples of Russia in the form of a unitary state. Then many hidden "mines" that are inherent in the current Basic Law disappear.

Otherwise, if the majority decides that it is necessary to preserve a federal state, several declared, but not valid, norms should be legalized. First of all, equalize the regions of Russia. Remove the ethnic component from the constitutions of the republics.

Moreover, it may be worth removing the administrative division of the country that is incomprehensible to many. Well, it is incomprehensible to a simple person of what subjects Russia consists of. Okay, 85 regions - this is understandable. What next? Republics, territories, regions, autonomous region, autonomous okrugs, cities of federal significance ... Assorted names. Perhaps it is worth leaving one name - the region.

Further. In case of preservation of the federation, it is necessary to introduce a norm according to which each subject of the federation has the right to have its own legislation, taking into account the national characteristics of the region. Nothing terrible will happen if some law in certain regions is tougher or, conversely, softer than the federal one, in accordance with local traditions and customs.

After all, there is, for example, in some Caucasian republics the practice of electing leaders not by direct voting, but through the voting of local parliaments. So what? Did this somehow infringe on the rights of citizens of these republics? Wise and worthy people were always respected there and reckoned with their opinions. And the local parliament is a collection of the most respected people in the republic.

I think this is not the last article on amendments to the Constitution of the Russian Federation. The discussion does not end there. And we will give readers the opportunity to express their own opinions on certain issues.

We are in Yandex Zen
The tragedy of the American army ("The Atlantic", USA)
Situational analysis of the death of the MH17 flight (Malaysian Boeing 777), made on the basis of engineering analysis from 15.08.2014
259 comments
Information
Dear reader, to leave comments on the publication, you must to register.