The Trump Wall at the expense of the Pentagon: the battle continues 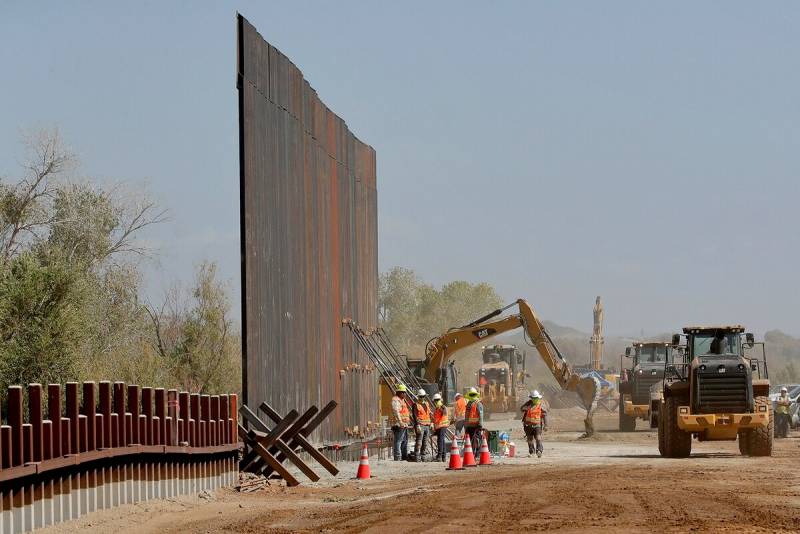 The construction of the Trump wall on the Colorado River, September 2019.As you can see, there is nothing to do with the scale of either the Great Wall of China or the Maginot Line. Although the legendary wall of Yatsenyuk, this building is clearly superior in monumentality

Despite the fact that the US military budget is growing, procurement and construction for most of the programs this year are cut off. The same awaits the following years.

Another Brick in the Wall

Water programs affected fleet, primarily large ships, which is largely due to their vulnerability to new hypersonic missile threats. Even the construction of multipurpose nuclear submarines suffered (which you can’t explain by the hypersonic Daggers and Zircons anymore). Less aircraft are bought, both for the fleet and for the Air Force, although it cannot be said that the reductions are so significant, but they are. The ground forces suffered, however, they have their own endless cinema there with programs that always start and then are covered up like the promising BMP program to replace Bradley - once again the next program orders a long life, the show starts anew. And even the development and "development" of the budget under fashionable hypersonic sauce also suffered a number of reductions.

We will not discuss how this is possible with the growth of the military budget and where the money goes. As it turns out, the epic with the construction of the so-called Trump wall on the southern border of the United States also played a role in shaking the appropriations.

As you know, the US Congress, which is in charge of appropriations, but lacking the ability to legally remove a line from the budget, tried to block the construction of the wall by not allocating a dime. The war around this was accompanied by a government shutdown and the redistribution of budget funds already received from various military construction programs or payments to military personnel for the construction of a populist wall. But, obviously, this is not enough, especially since the year is pre-election, and Donald Trump, who has fulfilled most of his promises exactly the opposite or could not do anything at all, needs success. Moreover, those who are seen by an ordinary American who does not give a damn about Syria, he will not find it on the map, and he does not care about the START-3 Treaty, but he understands the protection against raids by illegal migrants.

In general, the Pentagon should and plans to reallocate $ 3,8 billion from its budget for fiscal year 2020 to wall construction. Namely - $ 2202 million from the actual appropriations for defense, and $ 1629 million from the "Foreign (Overseas) Extraordinary Operations", that is, from the appropriations for the "war on terror", as the Americans call it. That is, to the contingents of troops in Iraq, Afghanistan, and in Syria, as well as in Africa, and to a number of programs to help the allied forces in these countries. From the budget of the Ministry of Defense, the main expenses for the wall will fall on the Air Force Aviation The US Navy, namely for the purchase of equipment - $ 861 million for the Air Force and 558 for the Navy. At the same time, it cuts exactly those articles that Congress added during the adoption of the budget in the course of discussion and consultations. That is, Congress is specifically angry.

One line was added - others are deleted. Romance!

So, out of 6 additional F-35Bs planned for purchase, 4 will remain, both additional Osprey MV-22 tilt planes are also canceled, with the explanation that "current funding is more than enough to keep the production line open." Of the total number of 9 Poseidon base anti-submarine patrol aircraft planned for purchase, 8 aircraft will also be cut off, with an explanation from the United States Department of Defense, saying that it is generally superfluous, exceeding the planned total number of aircraft of 1 units. Why then ordered?

Instead of the planned 8 tactical transport aircraft, the C-130J Hercules will be bought by 4 - they were planned for the Air Force of the National Guard and the reserve of the Air Force, but they can still be interrupted by junk. It was planned to buy 9 Ripper strike-reconnaissance UAVs MQ-12 - they left 4. Various equipment for the F-35A is also canceled, and the announced refusal to purchase turboprop “under-attack” vehicles will also allow us to spend this money on the wall.

For the Navy, a reduction of $ 650 million is planned for the construction of one of the America-class UDCs, which are already under construction in the state of Mississippi at Huntington Ingalls Industries shipyard. And the shipyard only recently reported that the construction of this ship allows the use of 457 related companies and subcontractors in 39 US states. Funding for the construction of one high-speed expeditionary transport at the shipyard in Ostel in Alabama was also crossed out. This ship and this shipyard are directly within the sphere of interests of the influential Senate figure, Senator Richard Shelby, chairman of the Appropriations Committee. This influential 85-year-old grandfather, who looks 60 years old like that, is a typical example of the “change of power” in America, which our liberal lackeys love to speculate about (as Dostoevsky called them at the time). Just since 1970 in the state congress, since 1979 in the US Congress from Alabama, and since 1987 - the senator from Alabama. And grandfather Richard is very worried about his staff and his shipyard and ship. But the ship was recognized as "exceeding current needs", as stated in the document on the redirection of budget funds.

The congressional outrage was another trick of the Trump administration that was completely predictable. Still, they once again spat in the face, although they only recently staged this whole circus with horses investigating "Russian interference in the election," "Trump’s connections with Moscow" and "impeachment."

Nita M. Lowy, Chair of the House Appropriations Committee from New York, and Pete Wiskloski, Indiana, Chairman of the Defense Appropriations Subcommittee, from Indiana, both Democrats, both clearly stated that Trump “again does not respect the separation of powers and threatens our security, raiding military resources to pay for their wasteful frontier Wall ”,“ organizing this backstage mechanism to support the purely political wall design for the sake of vanity ”.

In a separate statement, the Texas congressman, Mack Thornberry, the Republicans' chief spokesperson on the House’s Armed Services Committee, said he supported the construction of the Border Wall, but blamed the Pentagon for opposing Congress in channeling military spending. He added that the redirection of amounts already approved by Congress "undermines the principle of civilian control over the army and violates the separation of powers under the US Constitution." “This is contrary to the constitutional powers of Congress, and I believe that it requires Congress to retaliate,” said Thornberry. “I will work with my colleagues to determine the appropriate steps that need to be taken.” That is, even the Republican is against turned out to be.

In response, a statement was issued by Pentagon spokesman Lt. Col. Chris Mitchell. It says:

"The Department of Defense is committed to supporting the Department of Homeland Security's efforts to secure the southern border by building walls and roads and installing lighting to block drug smuggling corridors."
About migrants - not a word, mind you!

"Last month, we received a new request from the Department of Homeland Security asking for help blocking federal drug smuggling corridors along the southern border of the United States."
- said Mitchell.

“In response, the Secretary of Defense authorized $ 3,8 billion in support for the construction of approximately 177 miles of fences that will help protect our borders. We will continue to support DHS and other institutions as necessary to keep our homeland safe.”

A good price tag on a metal fence from a profiled sheet is 21 million per mile! Even if with different sensors, it is still very expensive. But it is unlikely that along the entire wall was a really expensive security system. As the hero of the famous Soviet comedy film "The Man from the Capuchin Boulevard" used to say: "Gentlemen! Corruption will destroy this country!" The one that, according to some in Russia, is not in the USA.

But the wall will be very long, and it can be built this long, at a pace of several hundred miles a year. But in this case, the process seems to be more interesting than the result. Although, if the Americans in general put their entire military budget into this construction, we would hardly have anything against it. Do not stop there, gentlemen!