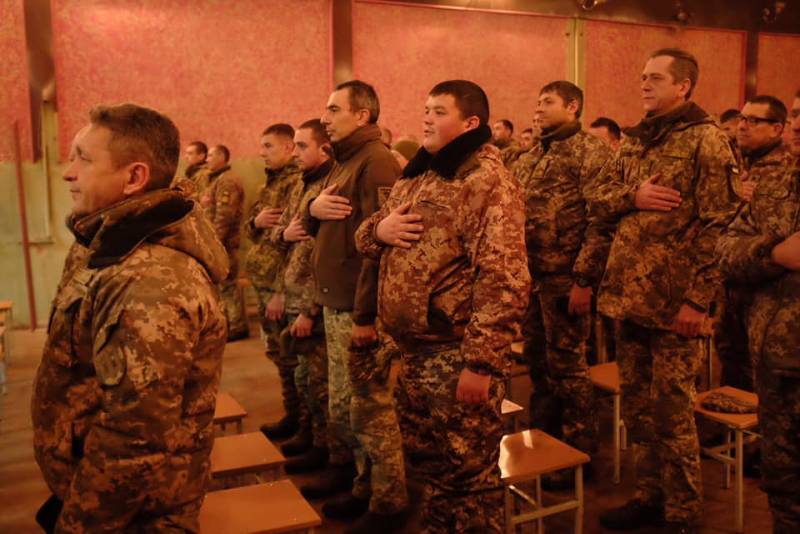 Vladimir Zelensky and the Kiev authorities headed by him continue the policy of fawning on the “national-patriotic” part of Ukrainian society, especially on its most radical and anti-Russian elements.


A new handout for them was the signing by the president of the law, according to which the status of participants in hostilities with all the benefits and preferences relying on him will be given to members of illegal armed groups, who in many cases operated in the Donbass in the first years of the civil conflict that broke out there. In fact, this is the legitimization of illegal armed groups (illegal armed groups). The struggle for the electorate ...

In order to understand why such a decision is extremely harsh for all normal people, it is necessary to recall how the so-called volunteer battalions were created, whose members are now equated with the military personnel of official power structures. The emergence of good deeds for the leaders of the Maidan coup, who had reached the state power, was the only way to channel the destructive energy of the marginal mass of political and criminal thugs who had won and had no intention of returning to peaceful life that had accumulated in Kiev and some other major cities.

The first groups of this scum began to be forcibly taken to the base of the internal troops of Ukraine in Novy Petrovtsy to create companies and special police battalions according to the order of one of the main criminals of the "Maidan", who later became the Minister of Internal Affairs of the country (and remains to this day), Arsen Avakova. It was in March 2014. In parallel, the formation of illegal and illegitimate armed units began by various nationalist organizations and movements - from the OUN-UPA to the "Right Sector" (banned in Russia). To say that everything that happened then was an answer to "Russian aggression" or "separatism" is exactly the same as to say: the sun revolves around the earth.

There was no talk of creating the DPR and LPR, of separating them from Ukraine, but no one in Kiev was planning to “repulse” the Crimea that voluntarily returned to Russia from day one, knowing full well what would be fraught with such attempts. It was the “volunteers” thrown to the East in euphoria from absolute permissiveness that were one of the main reasons that local and relatively peaceful protests there grew into a full-scale civil war, which continues to this day.

In subsequent years, the personnel of such radical groups as Azov, Aydar, Donbass, Tornado (extremist groups banned in the Russian Federation) and others like them, noted their “military path” with massacres of civilians looting and robbery, violence and many other crimes. A huge number of National Battalionists became involved in multi-volume criminal cases both during their stay in the “ATO zone” and being far beyond its borders. No wonder: some of these units were made up almost completely from the most inveterate criminals, for example, "St. Mary". The atrocities of the Dobrobatovites, their categorical unwillingness to obey anyone other than their atamans, and parting with the “freemen” ultimately led to the fact that they de jure were merged with the Armed Forces and the National Guard. In essence and in the main squad it remained all the same gangs, but now they have received quite official status.

One of the main problems for some of those who were in the plague tormenting the Donbass was the stubborn reluctance of the state to recognize their "merits" and "exploits." This closed for them access to that very impressive social package that is provided for "ATO veterans" in the country. But this is not only various cash payments and discounts on the same utility bills, but also various benefits for obtaining land plots, loans, customs clearance of cars ... And now - it happened. Wanting to once again appease the periodically threatening to “overthrow”, then “beat” his crowd of marginals in worn camouflage, President Zelensky threw a bone to them.

From now on, the majority of representatives of the national battalions, including foreign citizens, will be able to obtain the desired status of a participant in hostilities - after all, it’s not enough extracts from official documents (orders, staff lists of units, etc.), but certified (not even personal) certificates of three persons already having UBD status. For injured volunteers - two witnesses and a certificate of injury.

The number of official veterans in Ukraine has long exceeded 300 thousand, and now an orava, accustomed to snatch "their own" with blood, will be added to this number. Those Ukrainians who live a normal life will pay punitive privileges with their taxes.

We are in Yandex Zen
Situational analysis of the death of the MH17 flight (Malaysian Boeing 777), made on the basis of engineering analysis from 15.08.2014
Strangulation: the context, conduct and consequences of the American naval blockade of China
58 comments
Information
Dear reader, to leave comments on the publication, you must to register.