Toyota is taking off? Unknown UAVs are tested in the USA 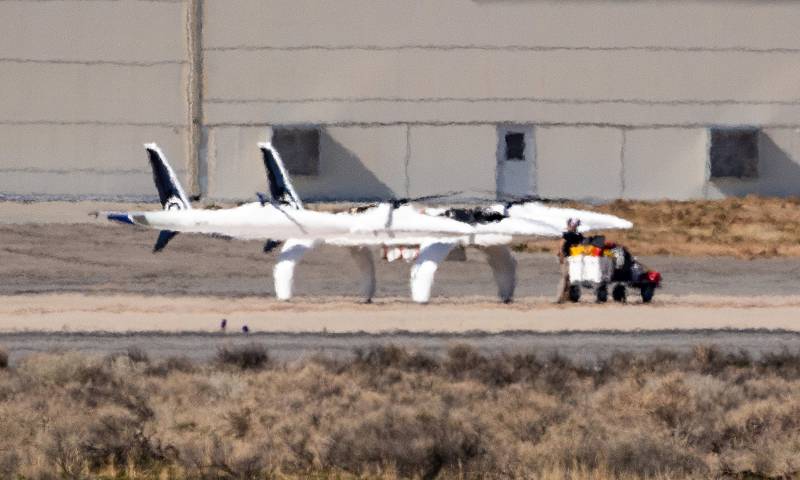 Currently, a large number of various types of experimental aircraft are being tested in the United States, and the other day it became known that there is another unusual experimental UAV. At one of the main research sites, a previously unknown drone of a characteristic type with special capabilities was seen. Official data on him has not yet been published, but the public has already managed to reveal some interesting details.

Few days ago famous aviation Photographer Jack Bayer has published a series of photographs of an unusual aircraft taken at the Mojave Air and Space Port. Due to not the best weather conditions, the pictures are not of high quality, but they allow you to determine the approximate appearance of the captured product and, at least, its class.

Using an tractor vehicle, the aircraft was taken to an open area and carried out some work. Upon completion, the car was towed to the hangar. What research is currently being conducted, and what was the purpose of the filmed exit to the site, is unknown.

Soon, a new photo of the experimental UAV appeared on the Reddit resource. It shows better the main features of the design and individual units. In addition, the registration number is clearly visible - this opens up opportunities for new information. However, the most interesting information is still unknown and it is not possible to determine it from photographs.

An experienced UAV has a registration number N871YT. This number is registered with Toyota Motor Engineering & Mfg America. The corresponding certificate was issued on July 29, 2019 and is valid until July 31, 2022. The number is issued to an aircraft with serial number 001, equipped with an electric power plant and having a take-off weight of less than 12500 pounds (5675 kg). 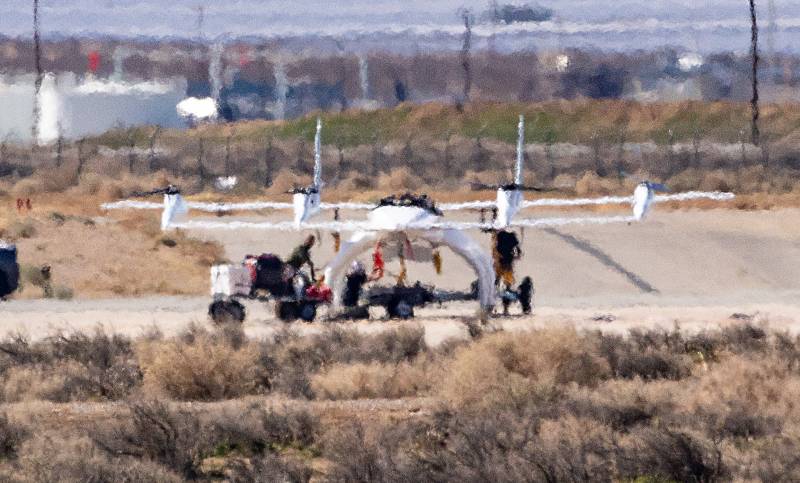 View from a different angle. Photo Jack Beyer
On the keels of the device there is an emblem of one of the promising projects of Toyota - the Project Portal program. Work on it started a few years ago, their goal is to generate developments for the creation of trucks with an electric power plant based on hydrogen fuel cells.

In the context of an unknown UAV, recent news. In mid-January, Toyota announced a collaboration with the US firm Joby Aviation. The latter is one of the leaders in the field of electric vertical take-off devices (eVTOL), and it is planned to create a new model of this kind together with foreign colleagues. Toyota is acting as an investor and also plans to provide some of the necessary technology. At the same time, the main design work falls on Joby.

Two companies plan to create promising equipment such as eVTOL, suitable for commercial use. Such aircraft in the future may become a solution to mobility problems in cities. A real revolution in transportation is expected. However, the development of this direction will be difficult, lengthy and expensive. So, in accordance with the latest agreement, Toyota will invest more than $ 390 million in a joint project. Deadlines for completion are not yet specified.

All available data indicate that at the Mojave aerodrome, tests of an experienced UAV jointly developed by Toyota and Joby have begun. Despite the recent signing of a joint work contract on the eVTOL topic, companies have already managed to build and test the first experimental apparatus.

Drone towing. The car allows you to evaluate its size. Photo Jack Beyer
It can be assumed that the platform and the main elements of the power plant were developed by aircraft builders from "Joby". These products were supplemented by a power plant and other components created by Toyota as part of the Portal project. Thus, the exchange of technologies and their joint use has already begun.

Apparently, the real cooperation between the two companies began long before the signing of the formal agreement. That is why only a few weeks have passed from the contract to the tests. At the same time, the project participants have not yet confirmed any of the existing assumptions, and therefore it is not completely clear what exactly is happening. However, much is clear without official confirmation.

An experimental UAV of unknown purpose and an unknown name is distinguished by its characteristic design and specific appearance. At its core, it is a multicopter helicopter with an electric power plant. In this form, the device is quite capable of serving as a technology demonstrator and a stand for testing technical solutions.

The UAV glider has an unusual design. It has a low elliptical fuselage and limited length. Front and rear two wings of large elongation and small width are attached to the fuselage. The rear wing span is larger. Between the wings are four longitudinal nacelles of small cross section. Central gondolas form tail beams on which keels are placed. 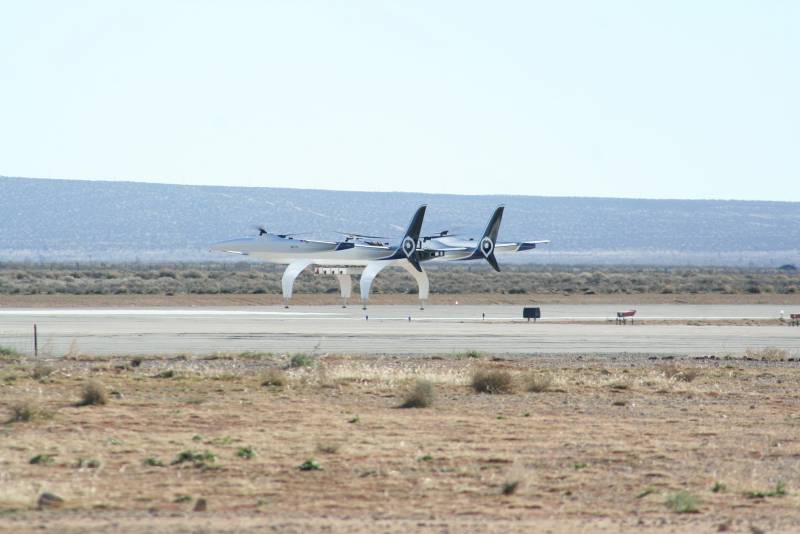 So far, the only high-quality photo of a besplotnik. Photo Reddit.com
The power plant includes five electric motors of unknown type and power. One is located in the nose of the fuselage, four others are in the side gondolas. Propeller groups are positioned forward and backward for optimal balance.

Four curved landing gears are fixed under the bottom of the fuselage. Some blocks of unknown purpose are suspended between them. With equal probability, we can talk about both a payload simulator and fuel cells from the Project Portal.

Due to the specific role of the UAV does not need particularly sophisticated controls. To pass the tests of the power plant, he needs a remote control system and means of monitoring the operation of the units. All flights can be carried out on command from the ground. However, in the future, new tests with battery life are possible, which will require a different avionics.

The weight of the UAV does not exceed 5,6-5,7 tons. The length of the vehicle can be estimated at 8-9 m, the wing span - about 8-10 m. Energy parameters are unknown. To evaluate them, you need to know the main parameters of the power plant. You may recall that already the early experimental cars with hydrogen fuel cells of the Portal project developed a capacity of 670 hp. However, the UAV and the truck, obviously, differ significantly in the design of the power plant and must show different characteristics.

Judging by the design, the nameless UAV is capable of performing vertical take-off and landing, hanging and performing horizontal flight in any direction. Perhaps a large unit is able to lift some payload on an external sling. More is not required of him - the device is an experimental platform for testing and testing new technologies in the energy sector. 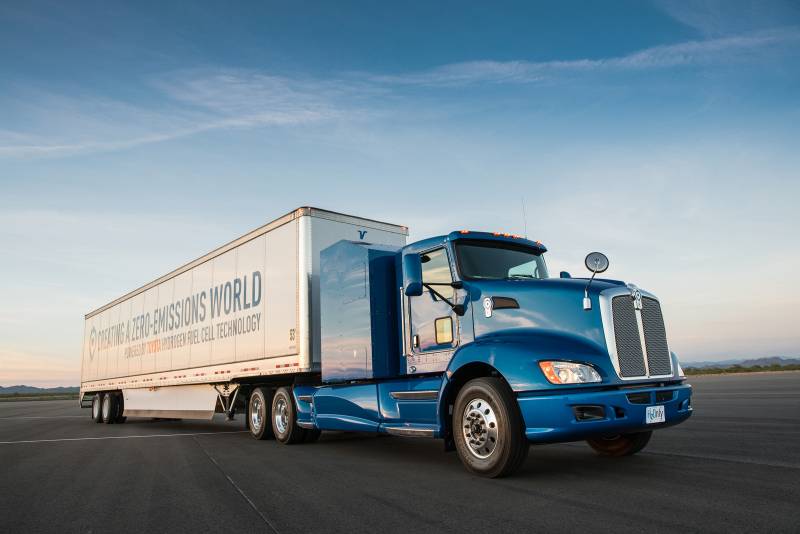 In parallel with this, Toyota, in cooperation with Joby Aviation, began adapting existing practices to the requirements of small aircraft. So far we are talking only about an experienced UAV with very limited capabilities, which probably has not even taken off. In the near future, flight tests should begin, and after that, the authors of the project will be able to draw the first conclusions.

At the moment, the main task of the joint project of Toyota and Joby is the general verification of new units and the accumulation of experience. After that, the two companies plan to begin developing light aircraft suitable for commercial use. How successful such cars will be and whether they will be able to find a place in transportation - one can only guess. However, it is obvious that the prospects for this project are directly dependent on current work.

We are in Yandex Zen
Aerospace Center "Mojave"
An-12 in Afghanistan
29 comments
Information
Dear reader, to leave comments on the publication, you must to register.