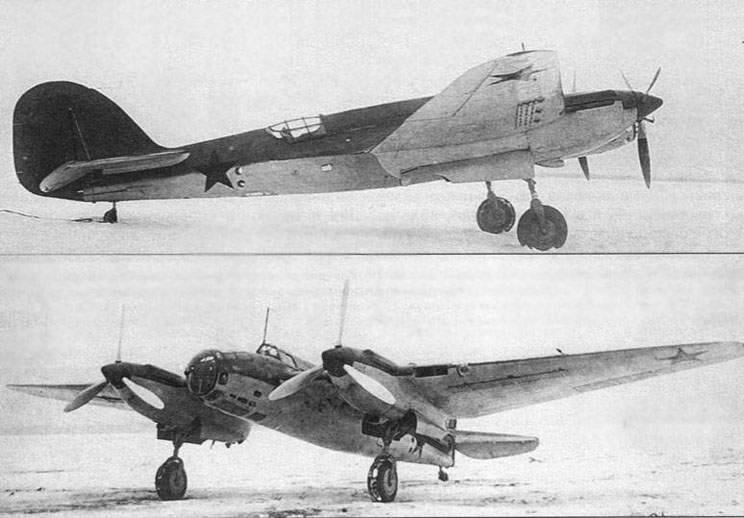 There is a fairly widespread opinion in the literature and on the network about the obviousness of the withdrawal from service of the SB aircraft and its further modifications, in particular, the Ar-2. The explanation for this was just as radical (as a sentence to VMN), just as vague: "obsolete."


However, upon closer examination, among the shortcomings of the Security Council, which supposedly determined its obsolescence, are called qualities that did not at all prevent its contemporaries from conquering the entire WWII.

2. All shock machines of all countries (Italy, perhaps the exception) started the war, having defensive weapons "rifle" caliber, and by no means all the firing points of the bombers of the participating countries were even able to re-equip large-caliber ones by the end of the war weapons.

3. Bomb load in one, and even more so in one and a half tons, was normal for the so-called medium bombers. And, in any case, it exceeded that of our main attack aircraft Pe-2 and Il-2.

4. Bombing accuracy from the horizon, the SB had the usual for horizontal bombers. And from a dive, it bombed with accuracy comparable to the "pawn" and the "Rapporteur".

5. SPU has already been installed on Ar-2 and improved communication conditions pilot and navigator, so that the crew communicate inside the aircraft using airmail and light bulbs was the destiny of the Finns.

All of the above gave grounds to Perov and Rastrenin, widely known in narrow circles, on the basis of studying a large amount of data (and these two researchers usually take the issue very seriously) to do in the article “Unknown Ar-2,” published in “Aviation and astronautics ”(numbers from 2 to 7) back in 2003 an interesting conclusion:

“A serious mistake is the termination of serial production of the Ar-2 bomber in favor of launching the Pe-2 bomber into the mass production.”
And also:

“In any case, Ar-2 throughout the war could show better combat effectiveness in solving any combat mission of front-line bomber aircraft than the main dive bomber of the KA Air Force Pe-2 aircraft.”
It would seem that 2003 is a matter of bygone days. However ... Water circles diverge wider and wider. And the conclusions made by the authors of this publication are replicated on the network not only by “specialists”, but often by specialists without quotes as well.

However, it was in this case that the respected Perov and Rastrenin gave a blunder. SB and Ar-2 had one very significant and, besides, irreparable flaw, for which the authors of the materials for some reason write extremely little or not at all.

This drawback is obvious to any pilot (and it is quite possible that to the simmer), who at least once made an attack on an air target.

The fact is that:

At first, only one crew member, namely the radio operator gunner, could monitor the rear hemisphere (ZPS) on the SB. The pilot had very limited for this (almost none, 2-3 rear-view mirrors; by the way, the SB exterior mirror was shot on the Ar-2 in order to increase 4-6 km / h of speed) capabilities, and the navigator had none at all. Let me remind you that in Pe-2, the radio operator and navigator observed the ZPS, and the crew commander had a view comparable to a pilot piloting a fighter of those years with a teardrop-shaped flashlight. That is, all three crew members could notice the enemy fighter coming into the attack, and not one. 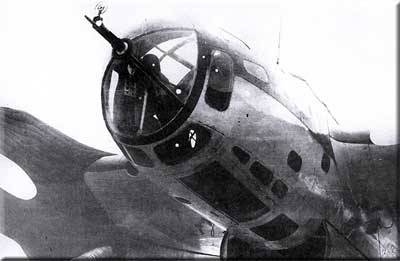 SecondlyIt would seem that both Pe-2 and Ar-2 (SB) have three firing points each. However, at the “pawn” in the ZPS, the navigator was responsible for protecting the upper hemisphere (or, rather, the quarter-sphere), and the radio operator-shooter at the bottom. But on the notorious Ar-2 (SB), both firing points, both upper and lower, were served by one radio operator gunner. There were no way to squeeze two people into the “pencil” of the SB tail boom. At the same time, climbing from the turret to the lower, hatch, machine gun, the shooter took tens of seconds (in any case, at least 10-20 s, and in the opposite direction, from the bottom up, even more time), but the attacking fighter SB to jump from top to bottom or back, it took 1-2 seconds. 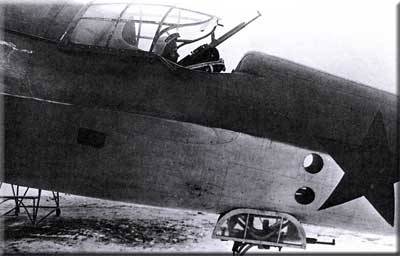 Thus, the attacking enemy only had to wait for the defensive fire to be opened from the Ar-2 (SB), after which he would move to the opposite hemisphere and calmly, going to point blank range, shoot an unarmed bomber. During the transition from MV-2 to MV-3 ​​or vice versa, the gunner-gunner could not lead aimed fire. Going down to the lower firing point, the shooter, if he was not already wounded or not killed, found that his plane was already burning, and the enemy fighter was leaving the attack. And, which is characteristic, in this case the caliber of defensive weapons did not matter.

Finally, the third. In the event of a wound or death of a radio operator gunner, even a fully operational Ar-2 (SB) became blind and completely defenseless. The pilot, having no view back, could not protect his car even with a maneuver. And the navigator was simply a sedentary duck, helpless and, despite the available ShKAS, practically unarmed. On the contrary, the Pe-2, even having shot all the ammunition, could, actively maneuvering, conduct a defensive air battle. The review, and the navigator’s commands, allowed the pilot to do this.

While in the mid-1930s the SB had an advantage in speed, these shortcomings were not so obviously fatal. The probability of his interception and any prolonged shelling by enemy fighters was small. Once the speed advantage has disappeared - that's it. Ar-2 (SB) was destroyed by enemy fighter aircraft with 100% probability. His crew simply did not have a chance, he could only count on fighter cover, and not on his own strength.

It is for this reason that this machine, despite the advanced concept and good performance characteristics, almost instantly left the battlefield. And the decision to opt for the Pe-2 looks absolutely logical and reasonable.

We are in Yandex Zen
About Stalin and Khrushchev
What you didn't want to know about England
85 comments
Information
Dear reader, to leave comments on the publication, you must to register.