The first of its kind. BTR "Eitan" goes into a series 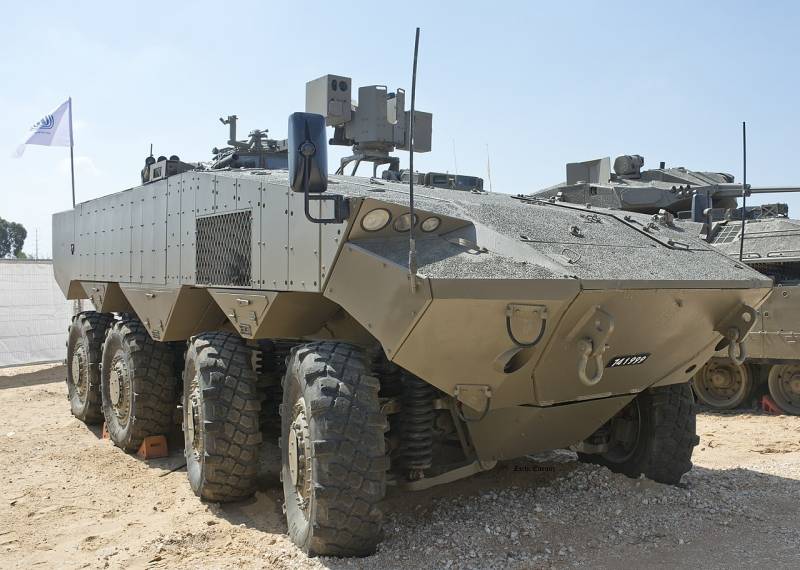 The first experienced Eitan at the exhibition in 2018

A few years ago in Israel, the development of a promising armored personnel carrier with the code "Eitan" began. To date, development work has been completed, as well as measures taken to prepare the series. On February 9, the Israeli Ministry of Defense officially announced the launch of mass production of such equipment.

Way to the series

The development of a promising armored personnel carrier began in 2014 as a result of the next operation of the Israel Defense Forces. The fighting confirmed the need to build and deploy more heavy armored personnel carriers and infantry fighting vehicles with a high level of protection. The new project was created by the Directorate of Armored Equipment of the Ministry of Defense with the participation of a number of Israeli and foreign companies. The latter were mainly considered as suppliers of certain components.

The design took about two years, and already in 2016, the first prototype was launched for testing. Until mid-2018, the first Eitan was tested alone, after which the second experimental machine went to the training ground. In 2019, the third armored personnel carrier was first shown. In the same period, tests were conducted of new combat units and modules of various kinds. In particular, the third prototype became a platform for testing a new turret with weapons.

Finally, on February 9, AOI announced the launch of mass production of equipment. The first few cars were laid, the construction of which will continue until next year. The transfer of the first batch to the customer is scheduled for the end of 2021. With the help of the new Eitan, the AOI plans to gradually replace the obsolete M113 armored personnel carriers.

The main features of the production of new technology are known. The final assembly of armored vehicles will be carried out by Israel; local enterprises will also begin to produce some components and assemblies. Other components are planned to be purchased from foreign suppliers. In some cases, this will provide substantial benefits.

In total, more than 60 companies, mainly Israeli and American, were involved in the Eitan production processes. Also concluded contracts with companies from other countries. We are talking about both manufacturers of military equipment and suppliers from the civilian sphere.

The head company for the assembly of "Eitan" will be the repair and restoration center MASHA-7000 in Tel Hashomer. Now this organization is busy building tanks "Merkava" and BTR "Namer". There are reports of the deployment of new production facilities and the recruitment of employees - probably these measures are directly related to the production of promising equipment. The expansion of production and the creation of jobs will allow for the assembly of armored personnel carriers without prejudice to existing orders.

Three experienced armored personnel carriers. In the center - the third prototype, which is the benchmark for the series
The main task of the MASHA-7000 will be the assembly of finished armored personnel carriers. At the same time, individual components will be produced. At the early stages, the repair and restoration center will have to make a noticeable number of units, but then their share will decrease and will not exceed 10%.

AOI plans to reduce the cost of Eitan due to US military assistance. To do this, at least half of the units for armored personnel carriers must be purchased in the United States. We are talking about the elements of the transmission, on-board equipment, some types of weapons, etc.

An additional way to save money is the design approach: the project makes the most of commercial components available on the market. In addition, the best practices for other projects of armored vehicles, including main tanks and tracked armored personnel carriers / infantry fighting vehicles.

So far, it is only known that the first Eitans will manufacture and transfer AOI by the end of next year. The number of cars in the first batch and the cost of the contract are not specified. However, it is known that a new-type serial armored personnel carrier, depending on the configuration, should cost about $ 3 million. Part of this price will be covered by American assistance.

AOI's plans for the total number of serial "Eitan" also remain unknown. In the past, officials spoke of hundreds of armored personnel carriers during the twenties, but more accurate data were not disclosed.

Nevertheless, the data on the procurement of individual components allow us to say an early delivery of about 50 cars. In the future, new orders may appear. Eitan is intended to replace the obsolete M113, one of the largest vehicles in the Israeli army. There are more than 6 thousand old APCs in service and storage, and replacing this fleet requires a large amount of modern equipment.

The main technical features of the Eitan armored personnel carrier were announced back in 2016. Subsequently, the appearance of the machine was repeatedly specified, which was soon reported by open sources. The benchmark for the series was the third prototype, mostly similar to the first sample. At the same time, prototypes differ in the composition of equipment and weapons, which will affect serial production.

The project proposes the construction of a wheeled armored personnel carrier on a four-axle chassis. The layout is standard for modern machines of this class. The general architecture of the machine and the composition of the units are determined taking into account the cost reduction of production and operation. At the same time, measures were taken to increase the level of protection against all threats specific to the AOI work areas. 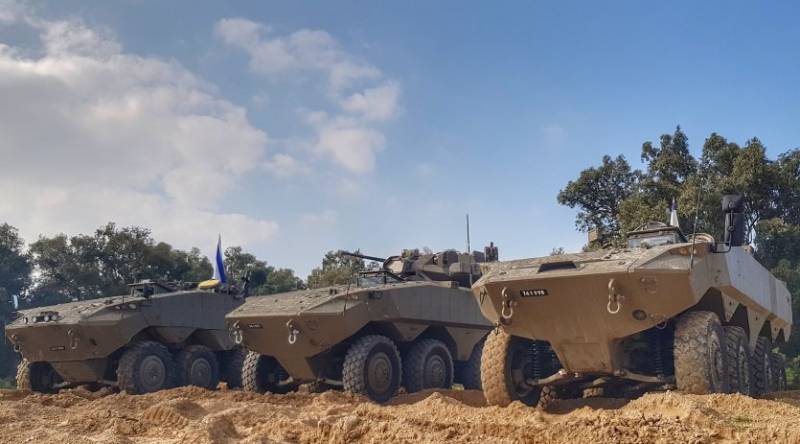 The eight-wheeled chassis is equipped with a 750 hp diesel engine. MTU brands. Torque is distributed using an Allison automatic transmission. An independent spring suspension was used with the placement of parts outside the armored housing. With a mass of 30-35 tons, Eitan should develop a maximum speed of 90 km / h on the highway; on rough terrain - at least 50 km / h.

More than 20 tons of armored steel are used to manufacture the machine body. It is alleged that such a housing provides a high level of ballistic and mine protection, however, the exact parameters are not disclosed. Earlier, Eitan was proposed to equip the Meil ​​Ruach active defense complex, but then the plans changed. Now, armored personnel carriers should receive KAZ Hets Dorban - a contract for dozens of such products was signed in January. KAZ launchers will be mounted in pairs to control different hemispheres.

Several weapons options are offered. The first prototypes were carried by the Katlanit DBM with a heavy machine gun. The third used a turret with a 30 mm cannon and another weapons. The development of a new combat module with missile-cannon weapons is also ongoing.

The project is characterized by the widespread use of modern electronics. So, along the perimeter of the case there are 10 cameras for driving and monitoring the situation; The video signal is output to 5 monitors in the inhabited compartments. There are modern means of communication and control, including armored personnel carriers in the common information space.

Earlier it was reported that in the inhabited departments of the armored personnel carrier there are places for 12 people. The serial version of the machine will be able to transport 13 people - 3 crew members and 10 paratroopers. At the same time, the principles of placement, landing and landing during the development did not change.

First of its kind

It should be noted that the Eitan project is the first of its kind for AOI. For several decades, the basis of the Israeli fleet of armored personnel carriers has been the tracked vehicles of the M113 family. Other types of vehicles with similar chassis are also available. Self-developed wheeled armored personnel carrier was created for the first time in stories. And the first project of this class was brought to the series.

Next year, IDF will receive the first samples of new equipment, and by the end of the current decade it is planned to create a full-fledged fleet of the desired size. The Israeli Ministry of Defense promises that new projects will change the face of the army. How it will affect the launch of serial production of the Eitan armored personnel carrier will become clear later.

We are in Yandex Zen
BTR "Eitan" project news (Israel)
Israel introduced the new armored vehicle "Eitan"
48 comments
Information
Dear reader, to leave comments on the publication, you must to register.