The legendary lorry. Interesting facts about the main Soviet truck 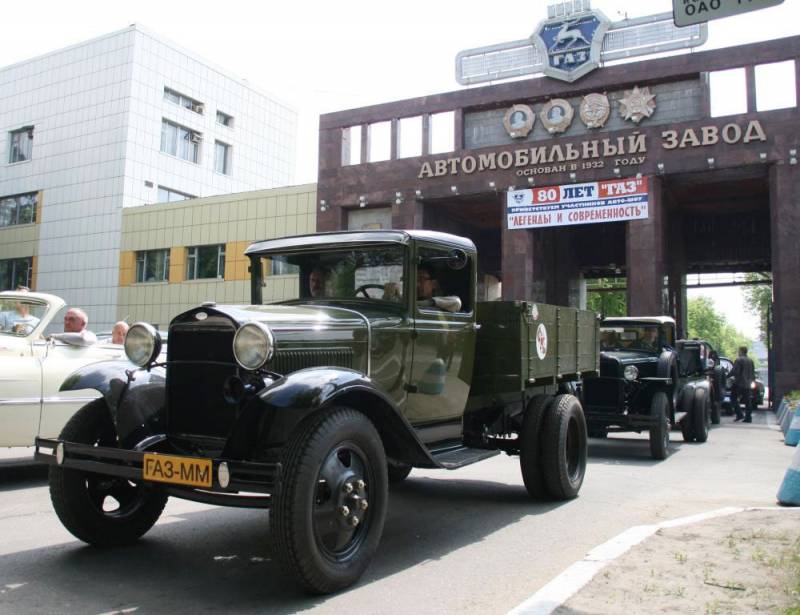 If we recall Soviet trucks, a lorry will rightfully take first place in our rating. The car got its name due to its payload capacity of 1500 kg. The image of the Gorky truck has become part of the national cultural code, and the appearance of the car is recognizable even many decades after the completion of production. A lorry pulled together with the USSR all large-scale construction projects of the 1930s, the difficult years of World War II and the post-war period of the restoration of the national economy.

Like all Soviet automobile manufacturing, the GAZ-AA truck has American roots. By the time the Soviet Union began to acquire its own automobile industry, half of all cars in the world were assembled by Ford factories. Despite the fact that there were no diplomatic relations between the USSR and the USA at that time, the parties could easily agree on a commercial basis. The USSR entered into a cooperation agreement with Henry Ford, the agreement provided for the transfer of necessary technologies and equipment for the serial production of cars and trucks, the training of Soviet personnel at Ford plants and other nuances. By the way, the Soviet Union also negotiated with the Chrysler and General Motors companies, but they ended to no avail. 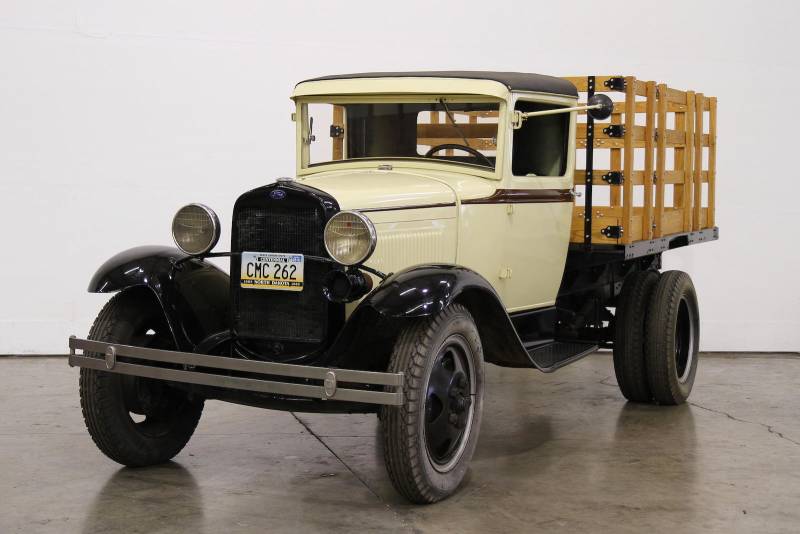 1930 Ford AA Truck
The platform for the legendary Soviet truck was a 1930 Ford Ford AA model. The first trucks assembled in 1932 were an exact copy of it. Initially, a screwdriver assembly was carried out in the USSR; cars were assembled from car kits supplied from the USA. Actually, in the same year, drawings of the car were also transferred to the country. After studying them, the designers began to adapt the car to the domestic realities of operation, while simultaneously mastering the production of components, parts and assemblies directly in the USSR. Already in 1933, one and a half trucks began to be assembled exclusively from Soviet-made components.

In parallel, the machine was adapted to local operating conditions. Designers replaced the stamped clutch housing, which quickly failed, on a cast one. They also strengthened the clutch and steering gear. On the lorry began to use their own steering gear. In addition, a full-fledged air filter appeared on the car. The on-board truck body was also designed in the Soviet Union.

Today, few people know, but the first one and a half trucks that came off the assembly line were called NAZ-AA. Serial production of the new truck began on January 29, 1932 in Nizhny Novgorod, at the V. M. Molotov Automobile Plant built here in Nizhny Novgorod. In the same year, on October 7, Nizhny Novgorod was renamed Gorky in honor of the "first proletarian writer." In 1932, the USSR celebrated the 40th anniversary of the beginning of his creative activity. Following the city, the factory was also renamed, which is still known as GAZ. Therefore, the name GAZ-AA was assigned to one-and-a-half only at the end of 1932. 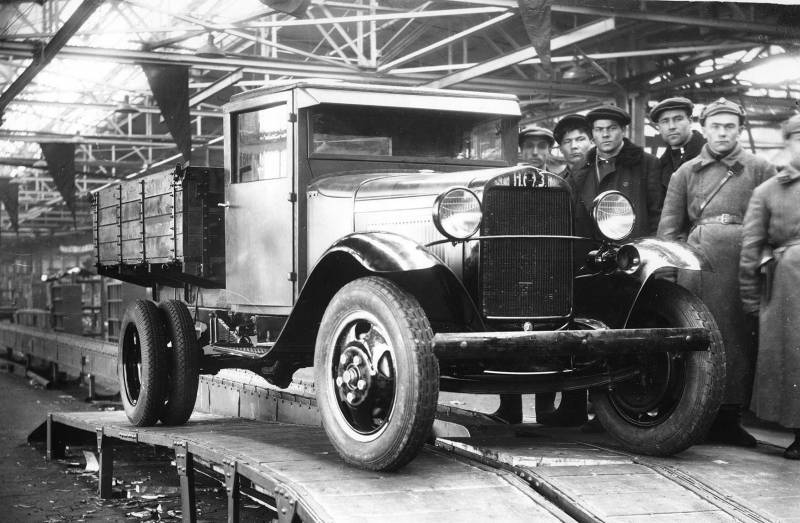 The first NAZ-AA truck rolls off the assembly line

The upgraded version was named GAZ-MM

In the mid-1930s, a new “heart” was chosen for the truck. As a result of modernization, they began to install a new GAZ-M engine on a lorry. The same engine was previously installed on the legendary Emka - a GAZ M1 passenger car. The upgraded version of the truck received a new 50-horsepower power plant (8 “horses” were added under the hood of the car), a new steering, a cardan shaft and an enhanced suspension. In this form, the truck was mass-produced from 1938 until the end of mass production. The upgraded version of the truck received the designation GAZ-MM. At the same time, there were no external differences between GAZ-AA and GAZ-MM, it was impossible to distinguish them visually. On the highway, such a truck could accelerate to a speed of 70 km / h.

The military version of the car was produced with serious simplifications.

Already during the years of World War II, there was an urgent need for the maximum simplification of the truck. Military versions of the one and a half entered history under the designation GAZ-MM-B (at the front were designated as GAZ-MM-13). One and a half wartime was carried out until 1947. They started planning a serious modernization at the very beginning of the war. First of all, it was aimed at the maximum cost reduction and acceleration of production. Nobody thought about driver comfort anymore. 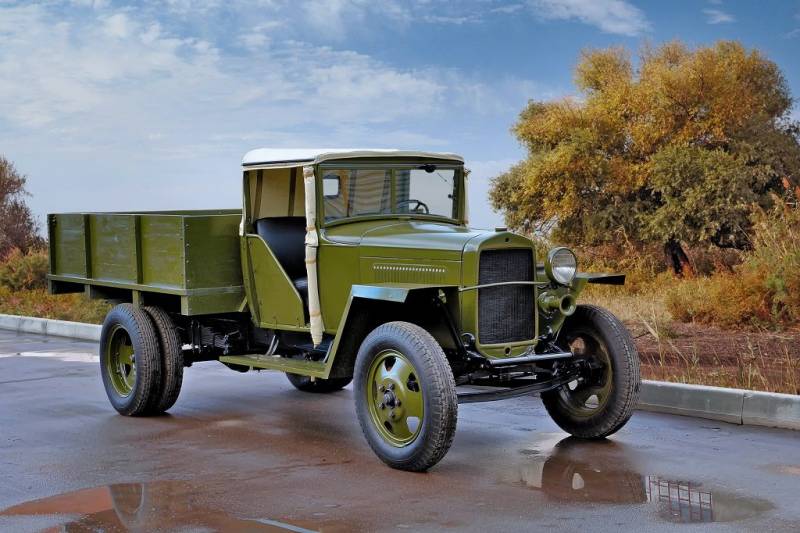 GAZ-MM-V wartime cabin without doors
At the start of World War II, the Red Army had 151 GAZ-AA and GAZ-MM trucks. At the same time, in the summer and autumn of 100, the troops lost a huge amount of freight transport. Trucks from the national economy, still beautiful and even elegant cars, were massively mobilized to replace the lost cars. At the same time, military versions of the lorry appeared gradually at the front. Almost immediately, the second headlight disappeared from such serial cars (it remained only on the driver’s side), a rearview mirror, a horn, a bumper, the janitor was left alone - on the driver’s side. Also on the GAZ-MM-V version there were no front brakes. 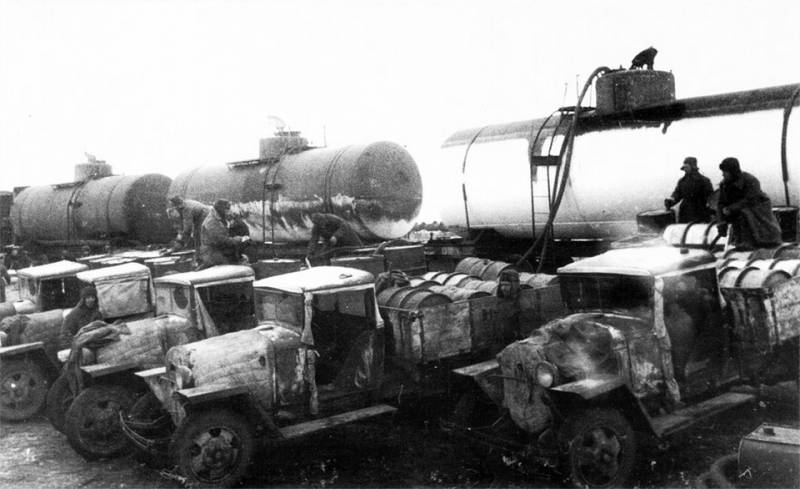 Since metal was a scarce material and was necessary for the production of weapons and ammunition, the cab of the truck was soon replaced by a wooden frame covered with canvas cloth. At the peak of the simplification of the design, there were not even doors in the cab that replaced the tarpaulin rolls. This version was released in Gorky in 1943, in 1944 the doors returned to the cabin, but it was made entirely of wood. The military version also lost its beautifully shaped front curved wings. Their design and shape were simplified as much as possible. Instead of metal, they began to be made of low-grade roofing iron by the method of bending; such wings had an angular rectangular shape. Also on wartime trucks, the driver's seat was solid wood and had no upholstery.

Driving a truck with a crooked starter was the norm

All one and a half sinned by the fact that the scarce starters with batteries installed on them had a very low service life. Experienced drivers noted that on a rare truck they could last more than 6 months. Therefore, in real life, the situation where the driver had to start the truck manually was a mundane thing. One and a half was started with the help of a “crooked starter”, that is, rotating the handle - a device for starting the engine with the help of a crank handle. This method of starting the engine is familiar to many today only in films, for example, in the famous comedy "Prisoner of the Caucasus."

A lorry went on almost everything that burns

42 hp engines and 50 hp could not boast of great power, but stood out for its longevity, unpretentiousness and, what is more important, in wartime conditions - maintainability. Due to the low compression ratio of 4,25: 1, the engines of the GAZ-AA and GAZ-MM trucks could be used even when refueling with the lowest grades of fuel with a small octane rating. Cars could ride on ligroin and even kerosene. And it's not a joke. One and a half could really be filled with kerosene, this method worked in the warm season and with the engine warmed up. In addition, the car well digested low-quality engine oils. 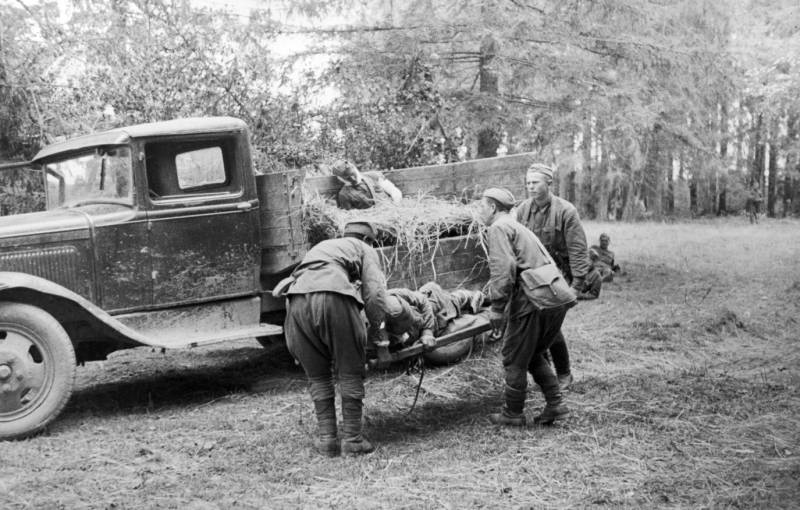 Loading wounded fighters in a half
In this aspect, one and a half trucks were much more unpretentious than the more advanced trucks that entered the USSR under the Lend-Lease program. The same Studebaker was fed exclusively high-quality fuel with an octane rating of 70 or 72. He also demanded the use of high-quality oils. In wartime conditions, situations arose when it became difficult to maintain and operate such equipment. In the USSR, this demand of the Studebakers was indeed considered a drawback.

The number of one-and-a-half issued in the USSR only slightly reached one million copies. It is believed that in total since 1932, 985 thousand GAZ-AA and GAZ-MM trucks, as well as various modifications of these vehicles, were produced. At the same time, they released the legendary truck not only in Gorky. Mass production of a lorry was established at four large plants: directly at the NAZ, then GAZ - in 1932-1949; KIM plant in Moscow - in 1933-1939, Rostov car assembly plant - in 1939-1941. and at the UlZIS plant in Ulyanovsk - in 1942-1950.

We are in Yandex Zen
Prospects for the development of military vehicles for the period to 2020 g
German amphibious vehicles
161 comment
Information
Dear reader, to leave comments on the publication, you must to register.