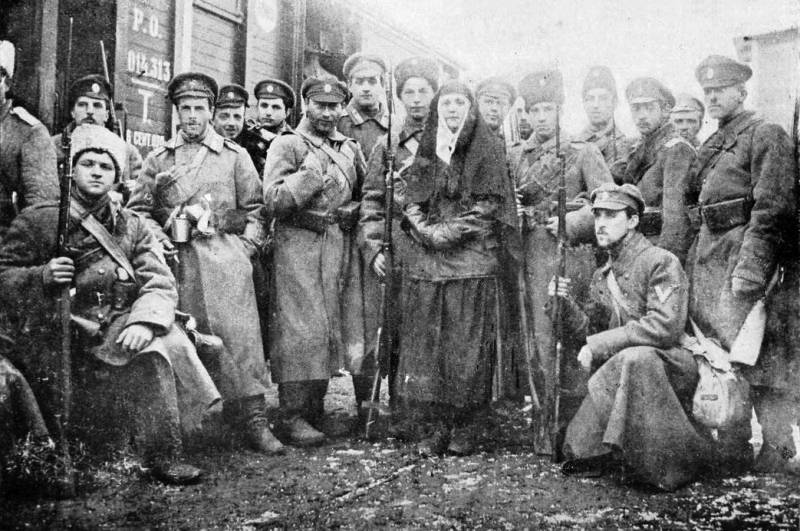 The approaching anniversary of the end of one of the most tragic events in stories of our Fatherland - the Civil War, which has actually erupted since 1917, makes us think about what are the most important conclusions from those formidable days that our society has been able to draw for the century allotted to it and which lessons, alas, have remained unlearned. As you know, a misunderstanding of our own past may well lead to a repetition of it, but each of us would like the least like that ...

First of all, it is necessary to recognize that we began to approach literally most recently to a more or less objective and balanced understanding of events and people of that extremely ambiguous period. It so happened that for a very long time they were interpreted as extremely one-sided and tendentious. In the days of the Soviet Union, for obvious reasons, the representatives of the Red Camp were considered to be the heroes and the “right side” of the Civil. Their opponents exhibited the embodiment of evil and all kinds of vices. Sometimes in an exaggerated demonized form, sometimes in a frankly caricature. What to do, winners always write history ...

Later, after 1991, a distinct “skew” quite naturally went in the opposite direction. In the country that exploded along the path of “de-communization”, “commissars in dusty helmets” began to be exhibited almost by the devil of hell, and representatives of the white movement were portrayed as exclusively noble and exalted guardians of Russia and martyrs for her. Fortunately, now the desire to think and comprehend the great turmoil of the twentieth century in all its diversity and complexity began to take over. Although on some forums in Runet, no, no, and stumble upon the collisions of the “white” with the “red”, where commentators are clearly not averse to moving from words to chopping with sabers and shooting from Nagans ...

This, perhaps, is the first and one of the most important lessons: in such an intricate issue as the armed conflict of people of the same blood, of the same faith, of one land, one can never “smear” one or the other side (by the way, in our Civil not two at all, but much more) with any one paint, anathematizing some and almost deifying others. That was the main tragedy of the Russian fratricidal warfare that it brought together people, the vast majority of whom earnestly and sincerely wished the highest good to their land and their people. They just saw this very good in completely different ways. And they were ready for their beliefs not only to die, but, alas, to kill.

Another important lesson, which I want to believe, has been firmly learned: any civil war is beneficial primarily to the external enemies of the state, of which Russia had a great many hundred years ago. Today, however, their number has not decreased at all. In the early twentieth century, the British and the Americans and their then allies unequivocally benefited from the Russian unrest. And the point here is not only in the regiments of the interventionists who stomped our land then, but in the collapse of the great empire, which had to be revived in blood and torment. This is what we should always remember: arranging a “showdown” in our own house, we set it on fire for the joy of those who slept and saw that our Motherland was on fire, but could not arrange it on our own. The geopolitical defeat of the country that allowed it within its own borders always and inevitably serves as the price of civil war.

And perhaps the main conclusion and lesson: in a civil war, no matter how noble and fair goals it may be fought, there are no winners. Imagine this is exactly so. Only the vanquished remain - with terrible scars on their bodies and souls, which inherit a country devastated to the ground, a land saturated with the blood of compatriots and hatred, taking its poisonous roots for many generations. Factories and roads can be rebuilt, fields sown again ... But what to do with families where the son was forced to confront his father, and his brother - to go with weapons on brother? In our country, the terrible consequences of all this began to be smoothed out, perhaps, only during the years of World War II, which united in a common hatred of foreign invaders and yesterday's whites, and reds, and party, and non-partisans.

It is this lesson that should finally be learned by all those who today are no, no, and they are trying to call Russia for a revolution and, in fact, a civil conflict as a means of solving certain problems. Russia has survived many disasters that have fallen on its mighty shoulders for centuries, and is able to withstand even the most difficult trials. However, unrest, schism, fratricide should not be repeated on our land ever.

We are in Yandex Zen
Situational analysis of the death of the MH17 flight (Malaysian Boeing 777), made on the basis of engineering analysis from 15.08.2014
Results of the week. “In our cooperative, the board is always agreed”
Military Reviewin Yandex News
Read Military Reviewin Google News
138 comments
Information
Dear reader, to leave comments on the publication, you must to register.