Leonid Kravchuk: “No one can be trusted!” 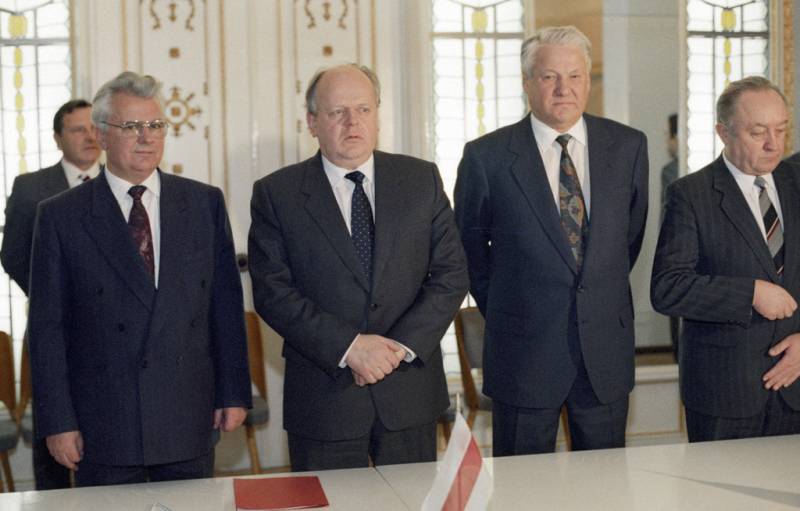 The first president of Ukraine Leonid Kravchuk surrendered his “non-stop” with all his giblets when he informed the world of a meeting before Hitler and Stalin before the war in Lviv. "This is a document, it is not a secret ..." - said Kravchuk sensational news on air "60 minutes", which introduced into a stupor all historians, even the inveterate Russophobia. Well, you can’t lie like that! What is this talking about?

Kravchuk apparently has a “document” from the Institute of Memory of Vyatrovich, a former employee of the Security Service of Ukraine and an ex-SUMER. They compose such “documents” there, and they lost their shores. But the Kravchuk believe ... Ah, it is not so difficult to deceive them, they are glad to deceive themselves, the classic has long said about this phenomenon of liars.

So, at one “meeting of Hitler and Stalin in the city of Lviv” Kravchuk surrendered everything acquired by the overwhelming historical the works of the Institute of Memory of Vyatrovich, from Kievan Rus of Ukraine to the Holodomor. And he made fun of himself: "You can’t trust anyone!" No need to lie, and you won’t lie.

And on the other hand, what a good fellow Kravchuk! Worthy of a standing ovation! He showed clearly how the history of Ukraine is being written today, and the latest history of the 2014 coup and the invasion of nationalist gangs in the Donbass.

"Totalitarian" lies of the West

But this is not the whole truth. This nonsense about the meeting of Hitler and Stalin in Lviv was born not from scratch, it is a consequence of the nonsense of the high historical minds of the West about the "totalitarian dictators" Hitler and Stalin, who decided to divide Europe. We saw the reflection of this highly scientific nonsense in the minds of ordinary villagers, not burdened with conscience: they are both “totalitarian”, how can they not meet, relatives. Here they are, the fruits of enlightenment from the State Department, Soros, the CIA and MI6. What is this talking about?

We somehow forget that it was the European countries that gave birth to fascism in the last century, not only in Germany, and it won all over Western Europe. Only the British monarchy with its monarchical roots and overseas colonies survived. Today, these European countries declare themselves fluffy democracies that have fallen from the collusion of “totalitarian regimes,” while all these “democracies” were abolished dictatorships. And today, such accusers and decommunisators as Bandera and Neo-Pilsud nationalist regimes are ahead of all.

Democracy is not “people's power”

The democracies of Europe gave birth to fascism at the beginning of the XNUMXth century, crowned by Hitler, who came to power democratically and spoke about the welfare of the German people, today they gave birth to Bandera and Neo-Pilsud nationalism, and they will come to both new Hitlers and Mussolini.

Democracy is a world of dictatorships in their pure form, because under the guise of "folk scenery." The people cannot rule themselves, because they are always different. Under “democracy”, a demagogue inevitably comes to power “democratically” with his retinue and demagogy about the “power of the people” - this was warned by Platonists and Aristotles, who were very critical of “democracy”. Or the clan of "deep demagogues" comes to power, as defined by US President Trump.

And then “historians” and entire institutions of memory appear that compose some kind of lie like a “totalitarian conspiracy” to justify democratic dictatorships and nationalist regimes. And in the end, Kravchuk appear, who consider this a “document”.

We are in Yandex Zen
A great interview with Sergey Lavrov: about Ukraine, Obama and Iran
What you didn't want to know about England
68 comments
Information
Dear reader, to leave comments on the publication, you must to register.