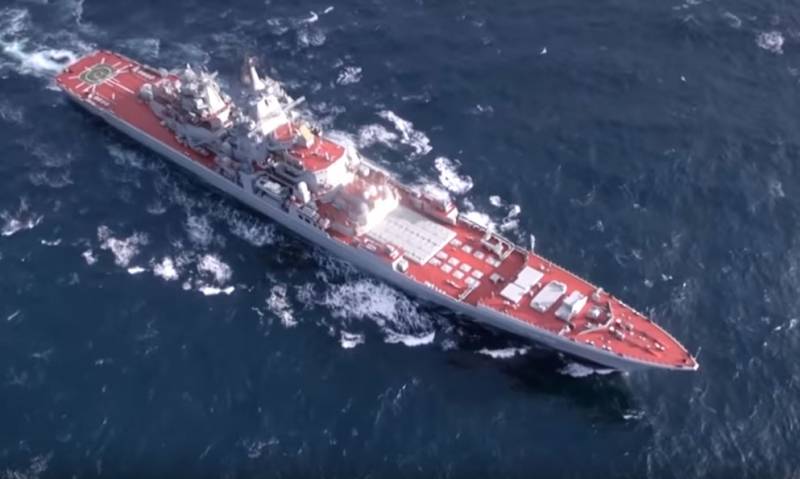 On Sunday, the Akademik Chersky pipe-layer left the port of Nakhodka. It is stated that the ship is heading to Singapore, where it is expected on February 22. The further route of the Academician Chersky is not known, although it is easy to assume that the pipelayer is going to the Baltic to complete the construction of the Nord Stream 2.

Soviet history made me think

Such caution by the shipowner indicates that the hike will not be easy. Experts predict him a number of difficulties, including the passage of straits controlled by unfriendly Russian countries.

Previously, in such cases, when important government tasks were carried out, support for civil the fleet rendered military sailors. Now in the far sea zone the presence of Russian ships is extremely limited, and the fleet bases on the foreign coast are almost lost.

You can, of course, recall the Vietnamese Kamran, the Syrian Tartus, transformed into a base from a supply point ... However, even these facilities are still far from full-fledged naval bases abroad. And the need for them, as we see, is.

There are disputes about Russian military bases in foreign territory in terms of whether we need a permanent presence on long shores or not.

Many believe that the existing facilities located mainly in the countries of the former USSR (Armenia, Tajikistan, Kyrgyzstan) are not enough. Examples are given from the Soviet era, when the country had only air bases on the planet with half a dozen (from Cuba to Ethiopia and Vietnam). The Navy at different times possessed one and a half dozen foreign base points (in Libya, Somalia, Yemen, etc.)

It seems that the debate is not only among the uninitiated public. The Russian authorities were exploring the possibility of deploying their base points, for example, in Venezuela and Nicaragua. In the winter of 2015, Defense Minister Sergei Shoigu made a significant trip to the countries of Central and Latin America, at once covering Nicaragua, Cuba and Venezuela.

The media then emphasized the military-technical cooperation of Russia with these countries. But there were some nuances. In Managua, the project for the construction of a shipping channel from the Atlantic to the Pacific Ocean was being considered with might and main.

To build a canal, the Chinese wished. Russia, as the media wrote then, was supposed to ensure the safety of the canal during construction and operation. For various reasons, the project was frozen. Affected by political instability in Nicaragua, where the pros and cons of America divided the nation in approximately two.

And Russia and China were not ready for a confrontation with the United States. (And in Washington, only in this way they considered the manifestation of the interests of Moscow and Beijing in their "underbelly"). In a word, the visit of Shoigu did not have big consequences, at least the Ministry of Defense did not receive a point for basing its forces in Nicaragua.

Cooperation with Venezuela has developed more successfully. Our strategic bombers repeatedly flew here, warships, including the Peter the Great, a heavy nuclear missile cruiser. The death of President Hugo Chavez slowed down cooperation with this country. However, the interests of Russia and its business in Venezuela remained.

The above examples, or rather the events that occurred, were open to society. They stimulated the creative thought of experts, observers and just lovers of lure. There were suggestions on the web where people interested in the topic would like to see Russian military bases abroad.

A quick look at the world map

Such countries, in addition to the existing points of the Russian military base abroad, are one and a half dozen. From the Central American named here to the African Libya, Sudan and the Central African Republic.

Most experts showed restraint. They did not swing so widely. Limited to the countries of Central America, South Asia and the Horn of Africa. Djibouti has already hosted the “military international”. The United States, China, France, Italy and Japan have base points in the ports of this small state in eastern Africa. Russian warships patrolling the Gulf of Aden in the fight against sea pirates also drop into Djibouti.

So at this point the interests of various countries intertwined. Russia must certainly be present in such nodes in order to ensure the security of its communications, the work of domestic business, and political and humanitarian activities.

In the meantime, we will hold our fists for the crew of the Academician Chersky, so that he fulfills the task that prompted this specialized vessel to sail so far.

We are in Yandex Zen
Situational analysis of the death of the MH17 flight (Malaysian Boeing 777), made on the basis of engineering analysis from 15.08.2014
Syria: Americans scare themselves, and Asma Asad buys chairs
58 comments
Information
Dear reader, to leave comments on the publication, you must to register.