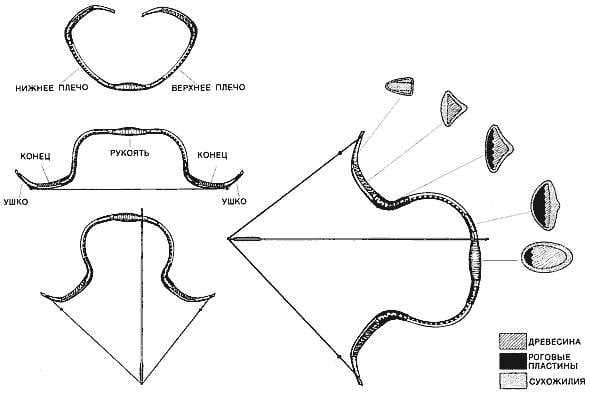 According to various estimates, the first bows appeared several tens of thousands of years ago. Subsequently it weapon constantly changing, and its evolution led to the emergence of new varieties with various features. One of the main results of such processes was the appearance of the so-called. compound onion. Characterized by increased complexity of design and manufacture, such weapons showed higher characteristics.

It is believed that the compound bow was invented by the nomadic peoples of the Great Steppe. The first archaeological finds with features of a complex structure date back to the III millennium BC. Other finds, distinguished by a more perfect design, belong to later periods, until our era.

According to one version, a shortage of materials contributed to the emergence of a complex structure. In the steppe it was difficult to find suitable trees for making simple onions, but gunsmiths found a way out of this situation. A new type of onion was less demanding on the size of wooden blanks, although it needed other materials. 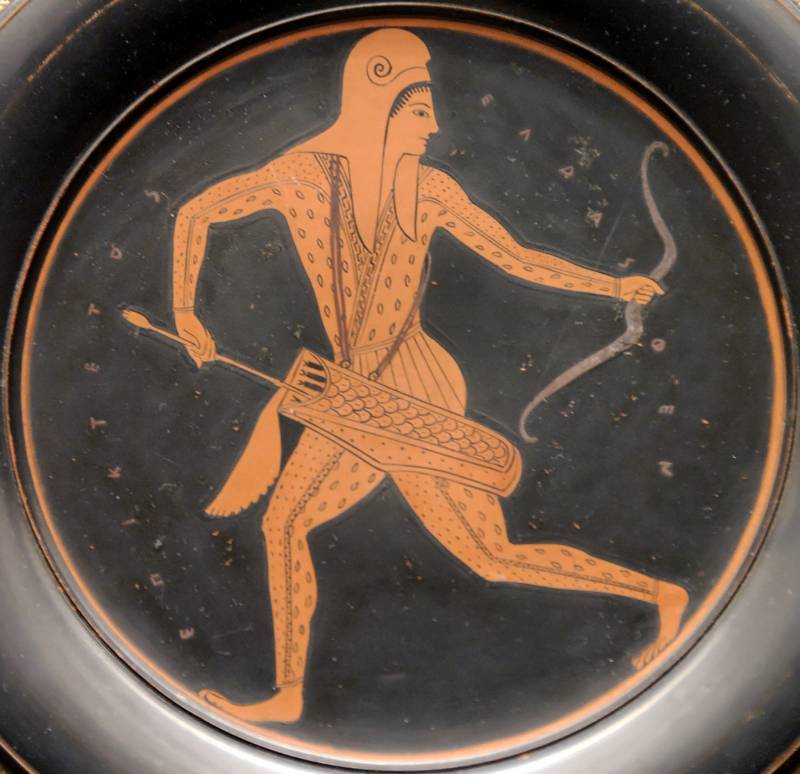 Scythian with a "signature" bow. The work of the ancient Greek artist Epictetus
The resulting design showed advantages over existing ones, which contributed to its distribution throughout Eurasia, as well as in North Africa. There are many variations of this onion, created by different peoples to their needs and taking into account the needs. With all this, the design continued to improve, and a search was made for new effective manufacturing technologies.

Compared to other types of onions, it was distinguished by the construction of the pole. This product was not made from a single wooden blank and not from several wooden parts, as on simple or composite bows. In different versions of a compound bow, the hilt and shoulders could consist of many wooden and horn parts fastened with tendons or leather strips.

General manufacturing techniques for such onions did not undergo major changes throughout stories. The basis of the future shaft was made of suitable wood. In this capacity, birch, maple, etc. were considered. - depending on the area of ​​manufacture. The billets were steeped, softened by steam and molded as needed. Then they were glued together, strengthening the joints with skin or tendons. At these stages, the shape of the future onion was determined.

Graphics B.A. Litvinsky "Compound onion in ancient Central Asia (On the problem of onion evolution in the East)." // Soviet archeology. 1966. No4.
Individual parts of the shaft, such as the ends with recesses under the bowstring, were reinforced by gluing the horn plates. Horn or bone plates were also glued to the inside of the bow. The system in the form of several layers of a horn and a tree made it possible to deform the bow while pulling the bowstring and accumulate significant energy, but it provided the required strength. The finished shaft could be painted, covered with thin skin or other materials.

Depending on the materials, technology and type of onion, the manufacturing process could take from several months to several years. The timing of the work was adversely affected by the need for prolonged and high-quality drying of adhesive joints. In addition, to create the correct shape, the shaft at some stages was bent in the opposite direction almost into a ring - time was also required to fix such a deformation.

The compound bow was distinguished by increased tension, which made special demands on the bowstring. It was made from silk or linen yarn, from the intestines of animals, from hair, etc. Different materials provided different characteristics. In addition, they behaved differently under certain external conditions. Usually the bowstring was spun from several dozen separate threads. At the ends, special nodes were provided that left a loop. 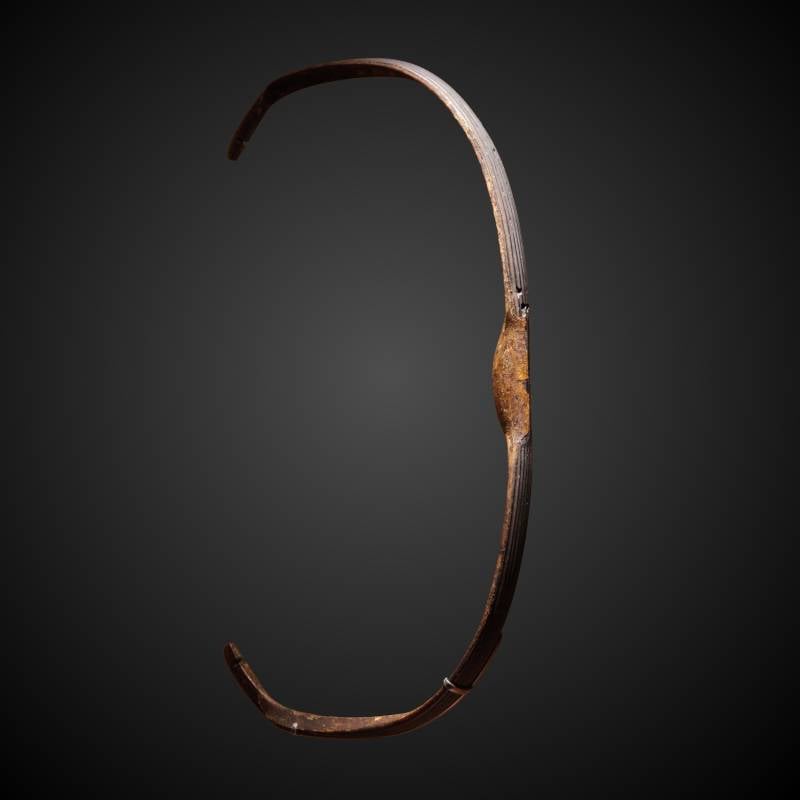 Central Asian compound bow, XVI century. or later. Exhibit of the Bibliothèque Sainte Geneviève Museum. Wikimedia Commons Photos
The exact composition of the components, sizes and technical characteristics depended both on the variety of the onion and on the time and place of manufacture, the skills of the master, the wishes of the customer, etc. At the same time, most of the compound bows of different nations had similar shapes and contours.

The sigmoid bow, also known as Scythian, turned out to be the most effective in the ratio of dimensions and characteristics. His shoulders have a characteristic round bend, turning into flat ends. The Scythian bow without bowstring bends forward, until the shoulders touch. The height of the weapon in the combat position was in the range of 0,6-1 m.

Such a design had a major advantage. Due to several bends and other features, the shaft was not a single spring, but the correct combination of several. Due to this, onions more efficiently stocked and gave energy. From the point of view of energy, a compound bow was about a third superior to even the most successful simple designs. This made it possible to reduce the dimensions of the weapon, increase the firing range and / or get a larger penetrative effect. 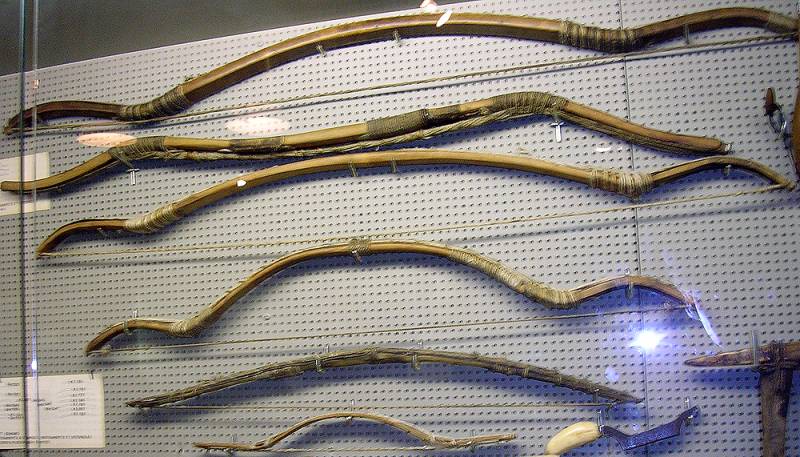 Inuit bows. Wikimedia Commons Photos
Another important advantage of a complex structure was a high resource. Simple and compound bows lose their elasticity as they are used. The special multicomponent shaft of a compound bow retained its characteristics for much longer. Among other things, this made it possible to keep the bowstring on the bow almost all the time - it was necessary to remove it only for long-term storage.

A successful combination of basic characteristics has contributed to the rapid and widespread dissemination of compound onions. Moreover, in just a few centuries, these weapons managed to reach the most remote countries.

For example, in Egypt, a compound bow appeared during the wars with the Hyksos - after the XVIII century BC In the same period, such weapons appeared among the Hittites, Assyrians and other peoples of the region. Quickly enough, a new version of the onions pressed the existing ones. By the middle of the XNUMXnd millennium BC from the Middle East, a new bow falls into the hands of the Cretan-Mycenaean civilization. A thousand years later, the Greeks met with a sigmoid bow - this time weapons came from the other side of the world, from the Scythians. 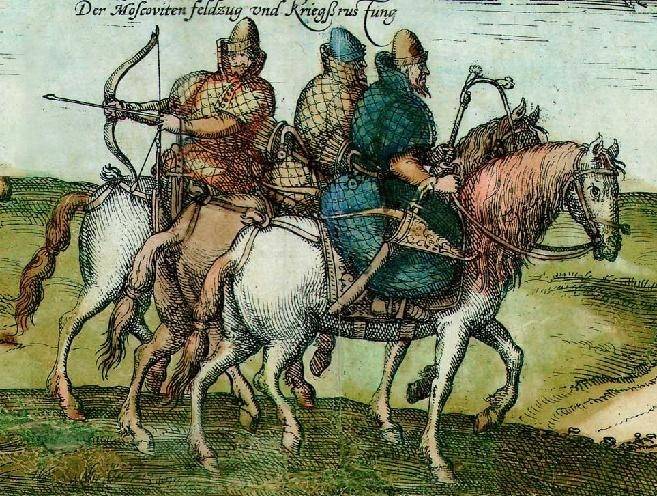 "Children of the Boyars", engraving for the book "Notes on Muscovy" by S. von Herberstein. The warrior on the left holds a compound bow
From Central Asia, compound onion fell into the territory of modern China. There they appreciated a new weapon, and quickly enough it became a familiar attribute of warriors. A bow with enhanced characteristics continued its march through Eurasia, and ended up in India. As in the case of some other countries, in India, the complex structure was considered a good addition to the existing varieties of onions.

As the compound compound spread around the world, it underwent significant changes. We used different materials available in specific regions, improved technologies, etc. Much attention was paid to the size and tension. Thus, equestrian archers of nomadic peoples preferred smaller systems, while in India bows of almost human size were created.

Over time, a complex bow appeared in Europe, but it was not widespread and could not displace other varieties of throwing weapons. It is believed that in the European lands such a bow appeared thanks to the Romans, who took it from the Middle Eastern peoples. Then he returned to the region with the nomads.

The compound bow was in service with many armies for several millennia. In some cases, it was supplemented by bows of other varieties, and in other armies it was the main throwing weapon. Onion production was accompanied by improved designs and the emergence of new solutions. However, after many centuries the situation has changed. 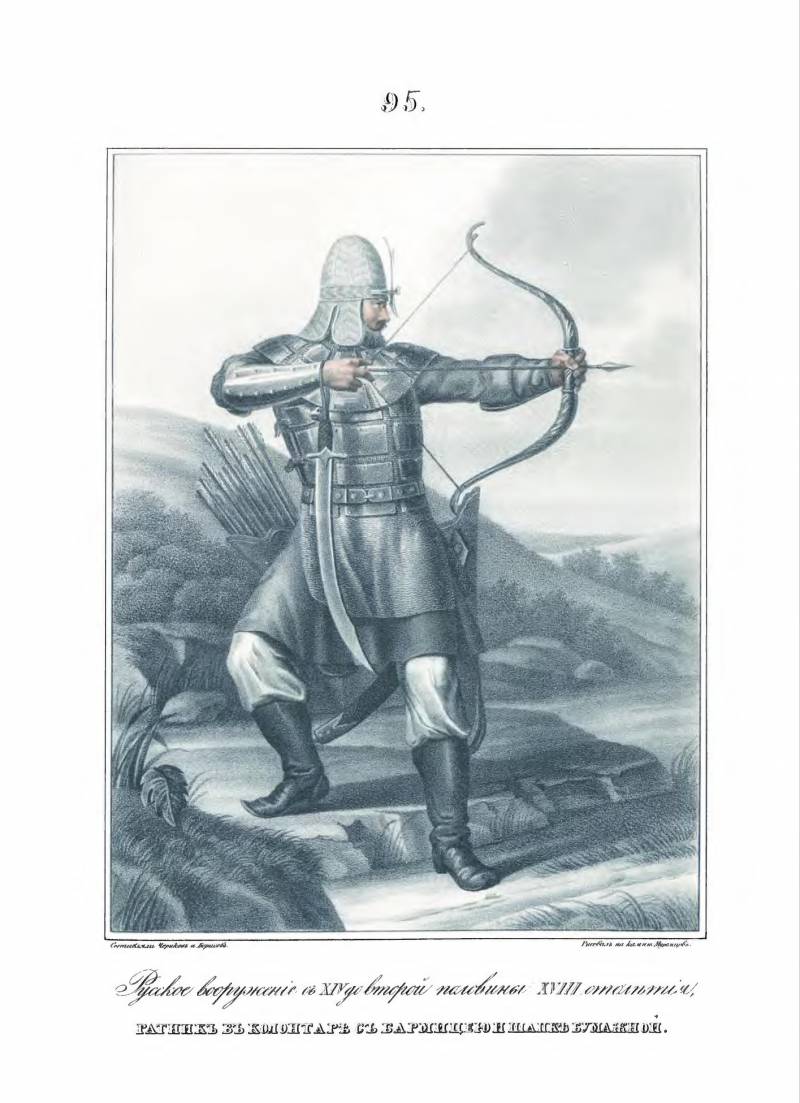 Old Russian archer. Drawing from the book "Historical Description of Clothing and Arms of the Russian Troops"
The first blow to all bows was the invention of the crossbow. This weapon, using similar principles, showed obvious advantages. However, even for several centuries he was not able to completely supplant bows. But later firearms appeared and became widespread. Even early imperfect fire systems could seriously compete with both bows and crossbows.

The arms competition ended in a convincing victory of gunpowder and bullets, and the propellant systems withdrew from the armies, although they remained as hunting or sporting weapons. However, a complex onion, unlike other varieties, has by now largely gone out of use. Now you can see such weapons only in museums or at military-historical events. The niche of sophisticated but effective high-energy weapons was taken by the modern block bow.

Ctrl Enter
Noticed a mistake Highlight text and press. Ctrl + Enter
We are
Samurai Weapon GraphicsEnglish bow - "machine gun of the Middle Ages"
20 comments
Information
Dear reader, to leave comments on the publication, you must to register.