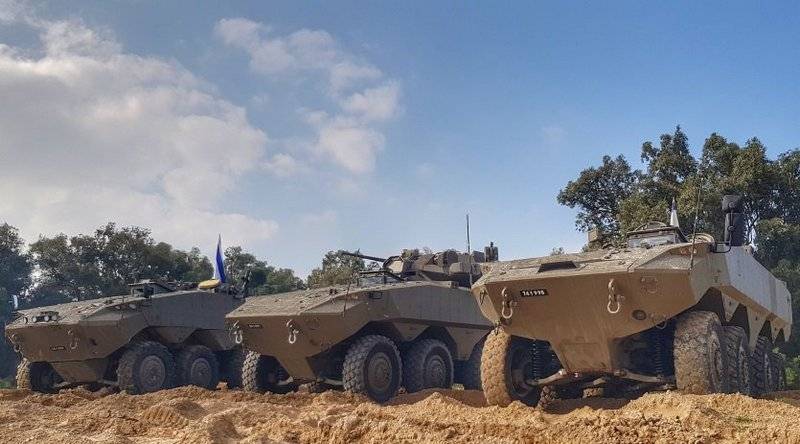 In Israel, mass production of the latest wheeled armored personnel carrier "Eitan" began. This was reported by the bmpd blog with reference to material published by oleggranovsky.

It is reported that on February 9 of this year, the Israeli Ministry of Defense officially announced the start of mass production of Eitan wheeled armored personnel carriers. The first vehicles will enter the Israel Defense Forces (IDF) at the end of the next, 2021.


As previously written, Eitan’s wheeled armored personnel carrier will carry 13 people (3 crew members + 10 landing personnel), it will receive an Iron Fist active defense complex, as well as an uninhabited turret with cannon weapons, called the Zrikhon ( "Turret"). This combat module is armed with a 30 mm cannon, coaxial 7,62 mm machine gun and the Gil anti-tank system (Spike LR II). According to the developers, all weapons of the module have particularly high elevation angles, which will allow shelling targets located on the upper floors of buildings.
Ctrl Enter

We are in Yandex Zen
Israel conducted a test of the combat module for the armored "Namer"
In Israel approved the purchase of Eitan BTR and the development of a new ACS
36 comments
Information
Dear reader, to leave comments on the publication, you must to register.