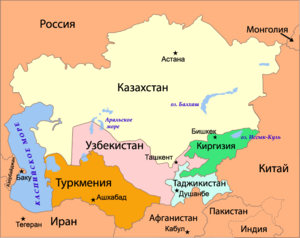 It is obvious that Tajikistan, Uzbekistan, Kyrgyzstan, Turkmenistan and Kazakhstan are artificial states. They were created in two stages. At the first stage, the international wing of the Bolshevik Party, which was under the complete control of the "financial international", conducted a national-territorial demarcation of the territory of Great Russia. Joseph Stalin muffled the dangerous processes of creating national elites, intellectuals saturated with Russophobia. However, due to the mass of other priorities and problems, the dangerous division of the USSR into national-territorial units was not eliminated. After the death of the red emperor, the processes of decay intensified, the Soviet republics became a stronghold for the hidden "fifth column", people who dreamed of becoming parochial presidents, khans, bais, princes. Obviously, the life of the majority of the population in Central Asia, due to the destruction of the USSR, has only deteriorated, both in terms of security and in terms of the degradation of the general systems of the state - education and upbringing, medicine, culture, science, national economy At the second stage, by the will of the traitors, the territory of the empire was dismembered. Gorbachev, Yeltsin and other gentlemen became the people who killed millions of people and destroyed the building under construction for centuries.


The simultaneous appearance of artificial Central Asian states has led to many problems. Moscow has lost millions of hands. Moscow abandoned the Russians in Central Asia, which, under the conditions of wild growth of parochial primitive nationalism and radical Islam, led to a great tragedy (it has not yet been completed). The Russian Federation and its population received transparent borders in the south and the flow of drugs weapons, smuggled goods. Only drugs take the lives of thousands of people every year. Russia got the problem of growing ethnic crime, the emergence of ethnic mafias, along with the growth of Central Asian communities. The degradation of the economy in the countries of Central Asia led to an increase in the influx of migrants in the Russian Federation. Russia has lost a number of important deposits of natural resources. The departure of Russia from the region led to the economic expansion of Western corporations, China, and several countries of the Islamic world.

In the field of military security, we received the threat of the emergence of the Central Asian front of a global war. In the medium term, the threat of a military conflict in Central Asia, which will affect Russia and its CSTO allies, is very likely. Russia, at least, will have to defend the territory of Kazakhstan. Last news from the countries of the Central Asian region only confirm this view. All countries of the region have both internal prerequisites for conflict and external ones. Sources of internal conflicts are social tensions, degradation of the economy in some countries (it cannot feed the present population), clan and regional competition (most clearly in Tajikistan, Kyrgyzstan and Uzbekistan), ethnic contradictions (Uzbek-Tajik, Kyrgyz-Uzbek), the problem of water and the availability of agricultural land.

So, because of the skirmish on the border, which took place on July 17, Uzbekistan and Kyrgyzstan were already technically in a state of war. Uzbekistan stated that Kyrgyz border guards carried out an “armed bandit attack”. The incident occurred on the evening of July 17, when in the unmarked territory local residents tried to repair the road and attracted the attention of border guards of the two states. The border guards demanded to suspend work, but civilians took an aggressive stance and refused to stop work. Having exhausted the verbal arguments, the Uzbek soldiers opened a warning fire, after which an exchange of fire began between border guards. Who was the first to use a weapon to kill, is still unknown. One Uzbek border guard was killed, the other was seriously wounded. Tashkent blamed the incident on Bishkek. Kyrgyz authorities protested to Tashkent. The statement of Tashkent leads to the fact that the fact of aggression can be interpreted as a state of war. In this case, Uzbekistan reserves the right to initiate retaliatory actions. It is clear that at the present time there will be no war, but for now. The next time the situation may go into a stage of serious armed conflict. Provocation on the border very often becomes a pretext for a full-scale war.

There are also serious external prerequisites for war in the Central Asian region:

- The strategy of the United States and parts of the Western elites to incite a fire in Eurasia and Africa. Huge territories from the countries of Central Africa to the borders of Russia, India and China are trying to turn into a "sea of ​​fire". The countries of Central Asia are a kind of “weak link” that will bring a lot of problems both to Russia, and to China and Iran.

- The expansion of radical Islam. This field is played by Saudi Arabia, Qatar, and there are interests of Turkey. The United States also supports radical Islamists, being in a strategic alliance with them. Radical Islam is the ram by which traditional, secular states are destroyed. Non-feudal debris is easier to inscribe in the New World Order than large states.

Russia, playing by the rules of the West, gained an unstable, dangerous region in the south, which at any time could lead to the need to create a Central Asian front. The only way out is to return to Central Asia, to take full responsibility for it, within the framework of restoring Great Russia. Nonsense about the "feeding of Central Asia" (the Caucasus, etc.) must be forgotten. We already bear even greater strategic, demographic, financial and economic losses due to leaving our territory. Otherwise, Central Asia will become part of the “World Caliphate”, the Celestial Empire, or an inferno zone like Somalia and Afghanistan. The choice is obvious.