The most unusual combat bikes in history 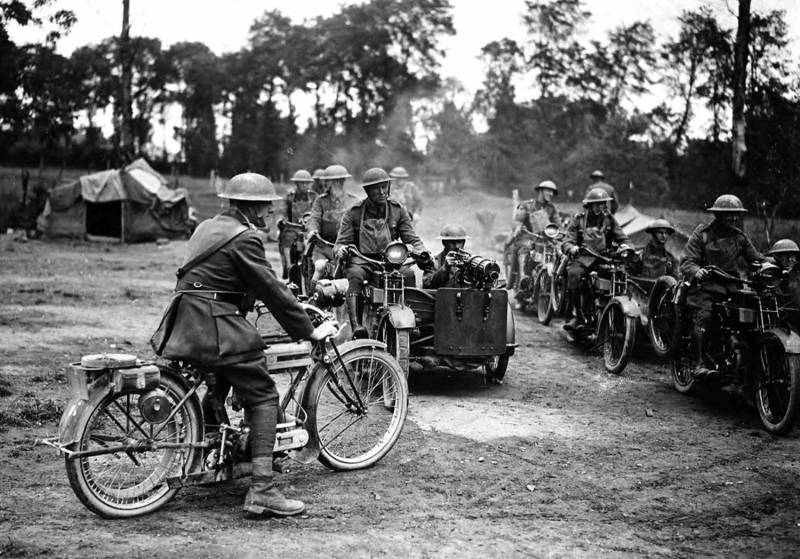 Self-propelled two-wheeled vehicles appeared in the 60s of the XIX century, initially they were equipped with a steam engine. These were the most distant ancestors of modern motorcycles. The first motorcycle with an internal combustion engine was built by German engineers Wilhelm Maybach and Gottlieb Daimler in 1885. Both engineers are the founding fathers of two major automotive brands that are known throughout the world today. Gradually, motorcycles developed, improved, and by the beginning of World War I reached a level that attracted the attention of the military in many countries.


It is worth noting that before the start of World War I, the horse remained the main means of transportation in all armies. Horses were used in large quantities in the army, and they required daily care, they had to be fed and watered. For example, in the Russian Imperial Army in 1916, 50 percent of all food stuffs were feed for horses: oats, hay, and feed straw. These were millions of pounds of cargo, which were not only very heavy, but also took up a lot of space. The advent of mechanized vehicles greatly simplified logistics, and they could not be handled like a living being.

Motorcycles were especially liked by infantry, signalmen and messengers. During the First World War, motorcycles were baptized and began to be used in large quantities. They were used for courier communications, reconnaissance, as a means of quickly transporting small cargoes, and in some cases as combat vehicles. Over time, motorcycles began to appear weapon, small reservation and camouflage coloring. By the beginning of World War II, motorcycles were already massively used by all the armies of the world, and the image of a German soldier on a motorcycle with a sidecar became a textbook. Over time, designers began to offer unusual designs for military motorcycles, including armored monsters. Consider the most interesting of the unusual projects.

The idea to equip a motorcycle with a machine gun and minimal armor was proposed by Frederick Richard Simms back in 1898. This man, in fact, also founded the entire automotive industry of Great Britain. The project he created was something like a motorized stroller with a machine gun on board, which was covered with an armored shield. According to modern terminology, his invention would be called an ATV. He hoisted Maxim's 7,62-mm machine gun on it. A notable feature of the development, dubbed Motor Scout, was that, if necessary, the driver-gunner could switch exclusively to pedal traction. 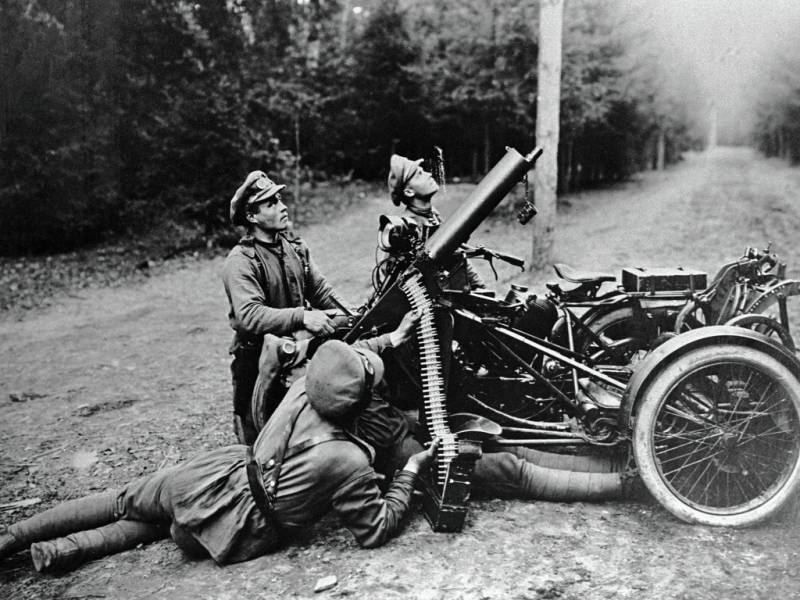 In World War I, motorcycles began to receive weapons en masse. In the armies of many countries, models appeared with a machine gun mounted in a wheelchair, which was covered with an armored shield in front. At the same time, a self-propelled anti-aircraft mount based on a motorcycle was designed in the Russian Imperial Army. A similar model did not have a reservation. At the same time, a standard Maxim machine gun was placed in the wheelchair on the anti-airflight installation.

After the end of World War I, the base for creating armored cars for many years became one of the most powerful and heavy motorcycles with a sidecar - the American Harley Davidson. In the USA, back in the 1930s, police wanted to buy motorcycles with a reservation. Apparently, the need to confront the gangsters, who had at their disposal numerous Thompson submachine guns, was having an effect. In fact, such motorcycles were ordinary versions of the Harleys with a sidecar, on which armored shields were installed in front with insets of bulletproof glass. The shields were similar to those used today by special forces soldiers during assaults and the release of hostages. 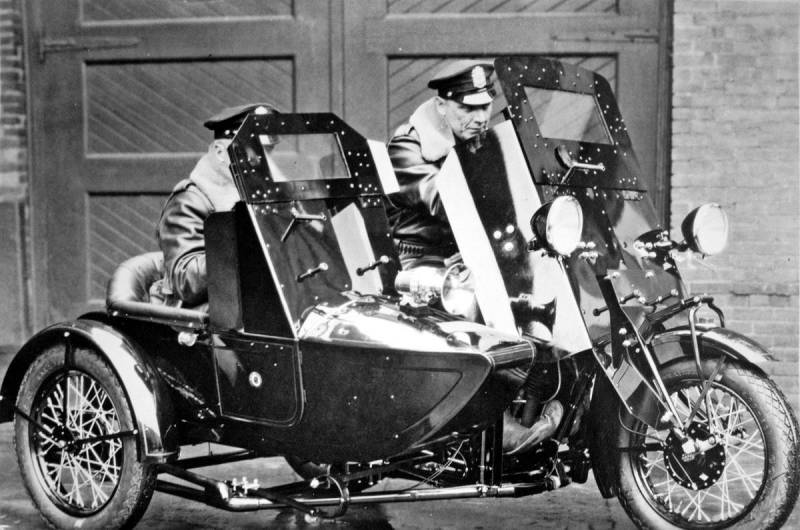 American Police Motorcycle Reservation Option
Much more advanced versions of the armored cars in the 1930s were designed in Europe. The military of Belgium and Denmark were considering the possibility of using similar equipment in a combat situation. So the famous Belgian company FN (Fabrique Nationale) in 1935 created an armored bicycle for the Belgian army, which received the designation FN M86. The model for the armed forces received an engine boosted to 600 cubes and a reinforced frame. However, even such a motor, which produced 20 hp, pashed before additional reservation, the weight of which reached 175 kg. The driver was hiding behind a massive bulletproof shield, in which there was a window. In a combat situation, the window was closed and it was possible to follow the road through the viewing gap. The shooter in the carriage was protected by armor from three sides. 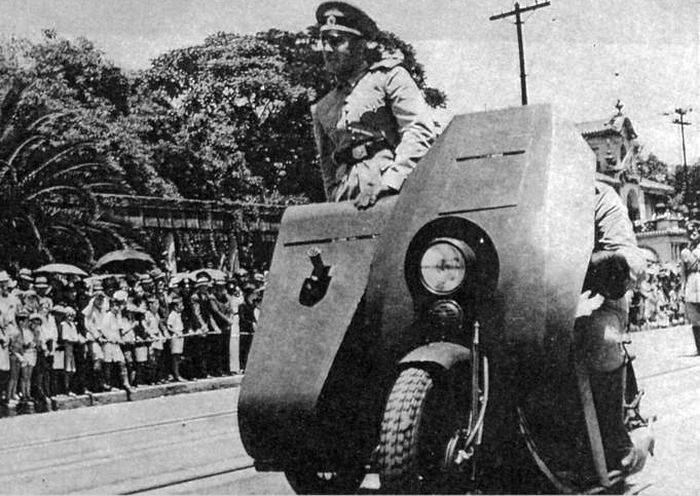 Armored Moto Armored Moto FN M86 at the São Paulo Parade
Military motorcycle riding capabilities are not satisfied. The speed and maneuverability of a heavy machine left much to be desired. However, FN was waiting for success in the international market. The model was sold to the Brazilian police under the designation Armored Moto FN M86. Both built motorcycles went to Brazil, as well as all the technical documentation for their release. At the same time, other Latin American countries, as well as Romania and Yemen, purchased such armored vehicles. True, all parties were small, in total about 100 such motorcycles were produced.

The engineers of the Swedish company Landsverk went even further and built the Landsverk 210 armored bicycle for the Danish army. The model was created in 1932 on the basis of the Harley Davidson VSC / LC motorcycle. On this model, the driver was covered with armor not only in front, but also from the back, as well as partially from the side. At the same time, the motorcycle itself also protected the armor, all important components and assemblies, and partially covered even the wheels. In Denmark, the model was called FP.3 (Førsøkspanser 3). However, the military was not impressed by the model, it was very difficult to control the motorcycle, and at a speed it was heavily drifted. The powerful engine of 1200 cubes, which developed up to 30 hp, did not save the situation, since the mass of armor and weapons placed on the model exceeded 700 kg. 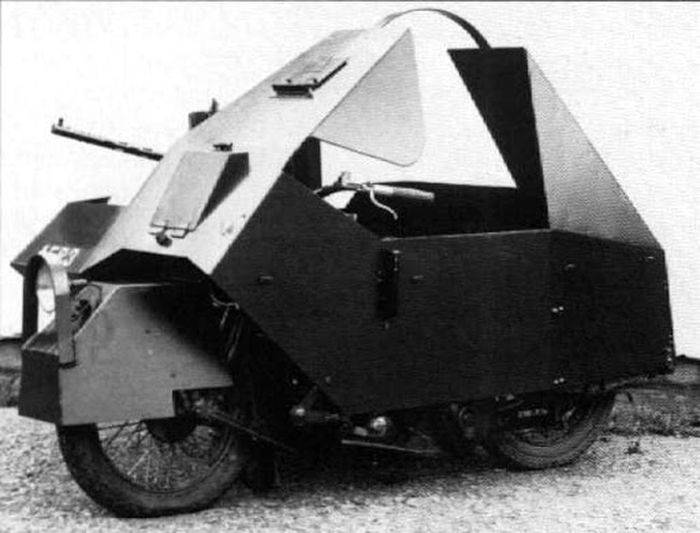 In the interwar period, the Soviet designer and engineer Pavel Ignatievich Grokhovsky proposed his own project of an armored combat motorcycle or just an armored cycle. Pavel Grokhovsky was primarily an aircraft designer and worked in the interests of the emerging airborne troops only. As we already know, he was not a pioneer in the creation of an armored cycle, such ideas were massively considered by the military of many countries in the 1930s. The designers offered numerous options for single armored vehicles, as well as armored models of motorcycles with a sidecar and machine gun weapons. Grokhovsky’s armoredcycle was distinguished from the designs of foreign designers primarily by the presence of a full-fledged armored corps that protected the fighter from all sides.

Grokhovsky’s armored vehicle was a small single armored car on a semi-tracked chassis with a front swivel wheel of a motorcycle type. The caterpillar mover was distinguished by the presence of only one belt, as well as two support wheels of small diameter on the sides. Reservation is lightweight, providing protection for the fighter and machine components from small arms fire and small fragments. The armored corps covered the entire motorcycle. The armored car driver simultaneously performed the role of a shooter, firing from a course machine gun installed in the frontal sheet of the hull. The driver's seat was in a closed armored cabin in front of the car, followed by a motor-transmission compartment. To monitor the terrain, the driver used viewing slots in the car body, as well as a hemispherical turret on the roof of the body. 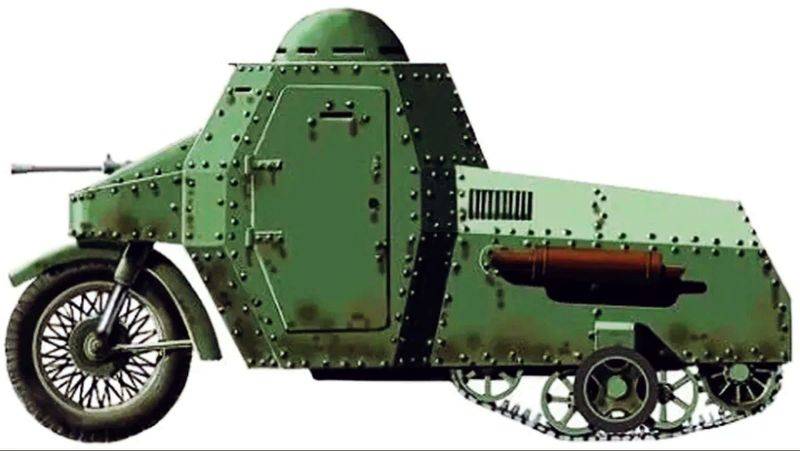 Bronecicles Grokhovsky. Fig. A. Sheps
Grokhovsky’s armored cycle was worked out in detail, but the project did not interest the military, therefore it was never implemented in metal. It’s a pity when you consider that your version of a half-track motorcycle appeared and was widely used by Germany during the Second World War, however, it was an option without armor, which proved to be an effective lightweight transporter. At the same time, like the Grokhovsky armored vehicle, the German SdKfz 2 was created primarily for the airborne troops.

One of the most interesting, and most importantly effective and popular examples of unusual combat motorcycles is rightfully considered the German SdKfz 2 half-track motorcycle. This model has become one of the heroes of the Hollywood film "Saving Private Ryan." The Mosfilm is not far behind in this regard, SdKfz 2 is also presented in the Russian film Zvezda, in which a Soviet reconnaissance group encounters a German patrol on a half-track motorcycle. From 1940 to 1945, 8871 such a motorcycle was assembled in Germany, and after the war ended, about 550 more cars were left from the existing reserve.

This model was developed as a conveyor and a half-track tractor for parachute and mountain jaeger units. The car was planned to be used as a light artillery tractor. At the same time, an indisputable advantage was that the motorcycle could be easily transported directly on board the main German military transport aircraft Ju-52. During the war years, a half-track motorcycle was used in all parts of the German army. Usually it was used to transport light artillery pieces: mountain and anti-aircraft guns, small-caliber mortars, and various trailers. Also, SdKfz 2 could be used as a cable router and even towing aircraft at aerodromes. 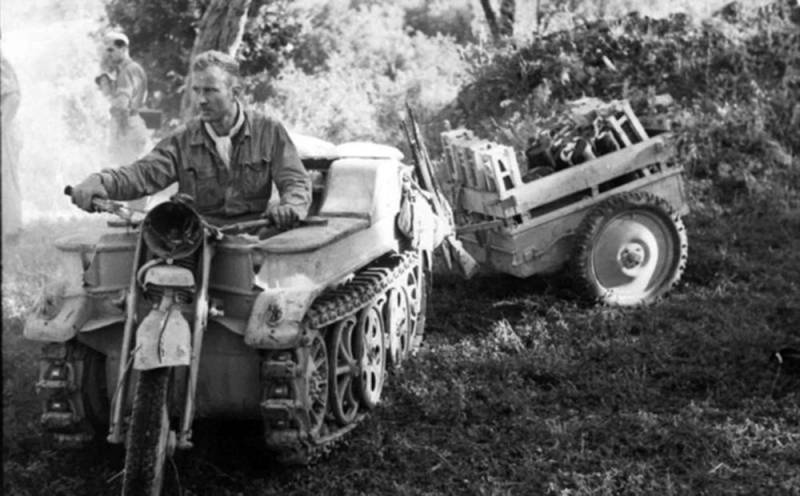 Separately, one can single out the fact that one of the options for factory delivery was hinged armor, after installing which a half-track motorcycle turned into a combat reconnaissance vehicle armed with a machine gun. True, such a modification significantly increased the weight of the motorcycle, which negatively affected the speed characteristics and cross-country ability of the SdKfz 2. In the usual version, the SdKfz 2 half-track motorcycle could travel over rough terrain at speeds of up to 40 km / h, and on the highway it delivered 62 km / h . At the same time, the standard carrying capacity of the model was 350 kg, the crew - up to three people.

One of the craziest projects in stories military vehicles can be called the French anti-tank scooter Vespa 150 TAP. The model was built in series and was manufactured in commercial quantities - from 500 to 800 pieces. The unusual scooter was specially designed for the French paratroopers and was a carrier of 75-mm recoilless guns M20 American production.

When creating this model, the designers took as a basis the Italian Vespa scooter with a single-cylinder two-stroke gasoline engine. The main advantage of this solution was mobility, the speed of the scooter on paved roads reached 66 km / h. At the same time, its frame supported the weight of the American M20 recoilless gun, which, although it was not the crown of creation, still pierced 100 mm of armor with the help of cumulative shells. 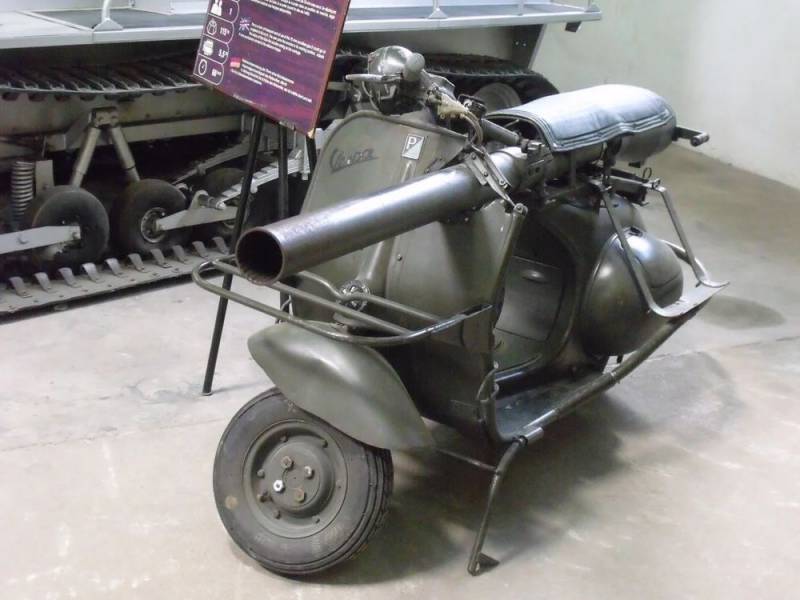 Vespa 150 TAP
The use of such combat scooters was supposed to be in pairs. One recoilless gun was attached on one, shells to it were transported on the other. Two paratroopers, having at their disposal such means, had to effectively deal with light enemy armored vehicles. For firing a recoilless gun from a scooter, of course, was removed and placed on a machine resembling a machine for a Browning machine gun M1917. At the same time, in an emergency, you could shoot directly from the scooter, however, you could forget about the accuracy of shooting.

We are in Yandex Zen
TMZ-53. All-wheel drive motorcycle that didn’t reach the battlefield
Iron Horse: how motorcycles were used in hostilities
59 comments
Information
Dear reader, to leave comments on the publication, you must to register.