Antitank systems "Competition-M" and "Metis-M1" on guard Donbass. What holds back the APU? 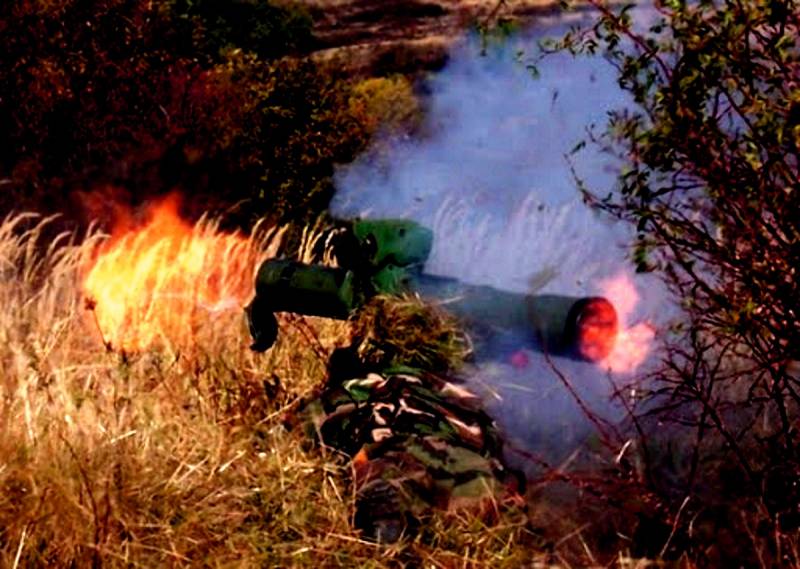 Despite the almost fivefold superiority of the Armed Forces in terms of the number of personnel, as well as the number of armored vehicles and artillery deployed near the contact line at the Donbass theater of operations and which are part of mechanized, airmobile, airborne assault and tank brigades, units of the 9th Mariupol-Khingan separate For more than four years, the motorized rifle regiment of the 1st Army Corps of the People’s Party of the DPR has been maintaining combat stability at the most vulnerable (operational-tactical Plan) Telmanovskiy operational direction, providing a more or less peaceful life as Telmanovo population and residents of several settlements of the southern tip of the Donetsk People's Republic.

The vulnerability of this operational area, also known as the “Telman Isthmus”, is due to the small operational depth of the rear zone, which is about 35 km, and extends from the contact line (settlements Kominternovo, Gnutovo, Staromaryevka, Petrovskoye, Dokuchaevsk) to the state border of Russia in the Rostov Region, that, with the numerical superiority of mechanized infantry and tank units of the Armed Forces, it is fraught with lightning-fast suppression of the forward strongholds of the Armed Forces of the DPR and an offensive throw of Ukraine Sgiach military formations in Telmanovo area. Moreover, the armament of the combat units of the Armed Forces in a hurried manner comes removed from conservation and restored by the Kharkov Armored Plant 123 "tank English Channel ”T-80B / BV, previously stored in the APU.

It is well known that these machines, inherited by Kiev from the ground forces of the USSR, are equipped with gas turbine engines GTD-1000T / TF with a capacity of 1000 and 1100 hp. respectively (possibly during the modernization and more “high-torque” GTD-1250), due to which their maximum speed can reach 80-85 km / h, which is a significant advantage during an active tank battle and a key advantage during the implementation of the “breakthrough” into the operational depth of the enemy defense or march. Tank units of the 1st army corps of the People’s Democratic Republic of the DPR can oppose only the less fast and maneuverable MBT T-80A / AB / B, which are at the disposal of the Ukrainian militants T-72B / BV, which are vulnerable to both armored-piercing fired under-caliber projectiles of the Vant and Vant types Mango "(due to the equivalent resistance of the frontal armor plates of the tower from kinetic shells only 500-540 mm), and in front of the anti-tank guided missiles RK-2C" Stugna-P ", which is due to both equipping these tanks with outdated dynamic defenses Контакт Contact-1/5 ”without tandem action (combined with the low resistance of the frontal projection from cumulative impact, we get no more than 900 mm equivalent), as well as the absence of modern Arena-M active defense systems in their airborne defense systems.

Moreover, the anti-tank guided missiles RK-2C "Stugna-P" are able to realize the "hill" mode (with an excess of 30-50 m relative to the attacked object) in the terminal section of the trajectory, attacking the tanks of the Donbass defenders at an angle of 45 or more degrees vulnerable overhead projection. After carefully analyzing the above details, one may ask a logical question: what means provided the units of the 1st Army Corps of the DPR People's Democratic Republic with the possibility of erecting defensive lines that remained unshakable over recent years (and even against the background of the enemy’s numerical superiority, as well as the steppe relief of the southern Donbass )?

The answer here lies in the anti-tank arsenals of the 9th Mariupol-Khingan separate motorized rifle regiment and other units of the DPR army, whose area of ​​responsibility covers a section of the contact line in the Telman Isthmus area. As you know, in addition to the obsolete anti-tank missile systems Fagot, Malyutka and Metis, whose anti-tank shells are equipped with monoblock cumulative warheads with armor penetration of 400, 500 and 550 mm, respectively (provided that enemy tanks do not have dynamic defense containers), missile anti-tank platoons of the 1st army complex also have more advanced ATGMs, whose guided missiles are equipped with tandem warheads to defeat heavy armored vehicles covered by second-generation DZ i.

We are talking about the modernized Tula complexes “Metis-M1” and “Competition-M”, which repeatedly appeared in photo and video reports filmed by the military commanders of domestic news portals near the contact line on the Donbass theater of operations both at the moments of reflection of the offensive “throws” of the Ukrainian Armed Forces and during the period of the exercises of anti-tank missile platoons of the DPR armed forces. Apparently, part of the Competition-M complexes developed by the Tula Instrument Design Bureau (now the Academician A. G. Shipunov Design Bureau of Instrument Making JSC) back in 1991, was taken by the militia of the DPR (now the 1st Army Corps of the NM DNR) as trophies in operations to liberate the cities of Debaltseve and Shakhtyorsk, during the march to Novoazovsk, as well as during the final stage of the assault on the Donetsk airport. As for the more modern Tula Metisov-M1, which entered the arsenal of the Russian army on March 2, 2016, their appearance in the anti-tank missile platoons of the DPR Armed Forces can be safely considered a “package” of asymmetric military-technical assistance provided to the republics of Donbass in response to the transfer Ukrainian fighters of the American counter-battery artillery reconnaissance radar AN / TPQ-36 (V) 5 "Firefinder", as well as large-caliber 12,7 mm Barrett M82A3 rifles.

The potential of the Contest-M and Metis-M1 complexes at the disposal of the Donbass anti-tankers makes it possible to withstand most types of main battle tanks armed with the Armed Forces without special difficulties. In particular, the 9M113M ATGMs, which are part of the Kokursov-M ammunition, boast 750 mm armor-piercing for the 1st and 2nd generation dynamic defense elements, which is quite enough to destroy the T-72A and T-64BV MBTs in almost any sector front projection (from the lower and upper frontal parts to the mask of the gun and the central sections of the frontal armor plates of the tower).

And even the deeply modernized version of the T-72A from the Kiev Armored Plant - the T-72AMT MBT, equipped with elements of the KChCHKV-19/34 DZ Knife, remains extremely vulnerable to Competitions-M and Metisov-M1, since the modules DZ "Knife" provide only a 20% increase in resistance to tandem cumulative warheads. As a result of this, the T-72A frontal armor plates, possessing 500 mm equivalent resistance from CS, gain an increase in resistance of not more than 100 mm (up to 600 mm). Even “paler” when meeting with the Tula anti-tank missile systems are such vehicles as the T-72AV, T-64BV and T-80B / BV (they are the tank “backbone” of the Ukrainian Armed Forces) equipped with Kontakt-1 DZ. This dynamic protection absolutely does not provide an increase in resistance to tandem cumulative warhead shells 9M113M and 9M131M of the Konkurs-M and Metis-M1 systems, which means that the above-mentioned APU tanks will be disabled in the first minutes after the start of the “breakout” attempt »And entering the radius of action of anti-tank systems.

Meanwhile, the semi-automatic control system with transmission of commands by wire (typical of the semi-automatic control system for the laser beam or the radio command system used in the Kornet-E and Chrysanthem anti-tank systems), characteristic of the Competition and Metis complexes, boasts weighty technological trump card, which consists in the possibility of hiding the location of the anti-tank operator due to the absence of emitters of laser or radio command control channels that could be detected by complexes electro-optical and electronic reconnaissance of the enemy.

We are in Yandex Zen
Donbass Interchange: Preparing for an Attack on Donbass at the height of the World Cup 2018
Chronology of "Minsk 2.0": the Armed Forces of Ukraine are preparing a "breakthrough" (part of 2)
23 comments
Information
Dear reader, to leave comments on the publication, you must to register.