To you Pompeo with a visit. About hassles on national soil in Kazakhstan 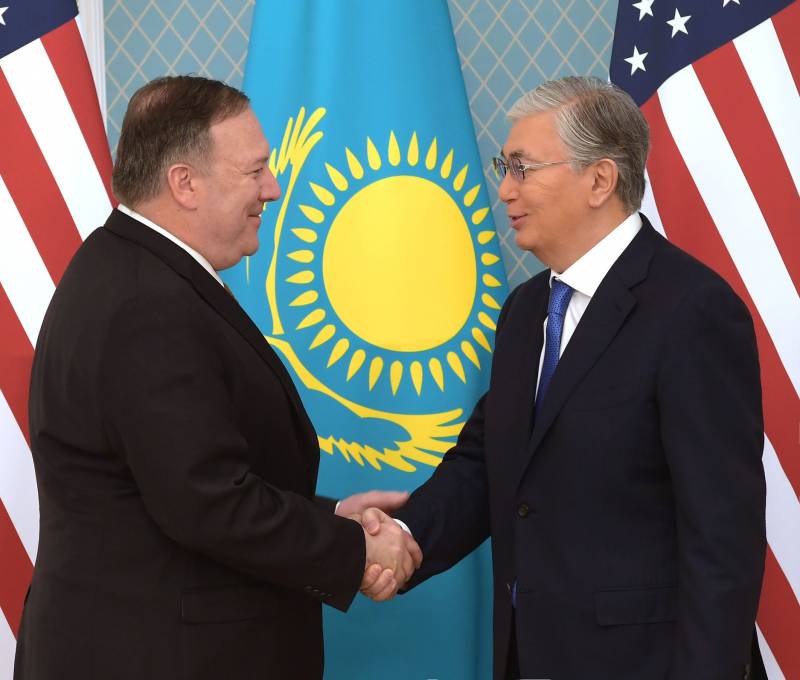 Last Friday, tragic events occurred in the south of Kazakhstan, in the Kurdai district of the Dzhambul region. As a result of the riots, 11 people died, 30 private houses, 15 objects of trade, 23 cars were burned, 47 people were arrested, 12 thousand people (mostly women and children) fled to neighboring Kyrgyzstan.

Bloody drama in the villages of Kazakhstan's Dungans

The village of Masanchi, where the tragedy occurred, is considered the unofficial capital of the Central Asian Dungans. In Kazakhstan and Kyrgyzstan there are not so many of them - about 40 and 55 thousand, respectively. The main part of the ethnic group (about 10 million people) lives in the border areas of neighboring China, speaks Chinese and differs from the titular nation of China in that it has been practicing Islam for centuries.

Kazakhs always regarded the Dungans with a certain degree of mistrust, considering them Chinese. In the new century, tension between ethnic groups intensified. The fact is that the Dungans are better adapted to modern economic difficulties.

They firmly settled on the land, fertile and scarce, among other things, in this overpopulated region of Kazakhstan. In addition, the local Dungans have established fairly strong ties with their Chinese fellow tribesmen. At the expense of them they took control of the “flea market” of Alma-Ata.

By the way, after the massacre in Masanchi and neighboring villages, a heated crowd of ethnic Kazakhs gathered to go to smash the Alma-Ata flea market, but people who controlled the process did not allow it.

The authorities interpret the beginning of the conflict differently. In one case, it is said that it began between a patrol crew and a local driver who was hiding from a chase in the courtyard of the house. The intruder’s family met the police aggressively and stoned. After that, about 300 Kazakhs arrived in Masanchi, who committed the pogrom.

According to another version, the conflict began due to a domestic incident in which the 80-year-old elder suffered. He had to be promptly taken to a hospital in Almaty with the help of a sanitary aviation. The Kazakhs decided to punish the Dungan. The domestic conflict has grown into interethnic. According to the Ministry of Internal Affairs, about a thousand people took part in it.

Where did sinophobia come from?

However, the conflict also has a political base. At one time, President Nursultan Nazarbayev opened the country to Chinese business. The Chinese willingly came to Kazakhstan, credited his projects, but they undertook to execute them themselves. Chinese firms brought their workers in, set them higher pay than local workers. On this basis, fights began to periodically arise, reports of which quickly spread throughout Kazakhstan.

Labor conflicts in Chinese firms laid the fertile ground for national self-identification. The authorities of the republic decided to drag a blanket over themselves storiesas if Kazakhstan is the direct and main successor of the Golden Horde. Along the way, a degree of nationalism was blown up. From here came the sinophobia in the republic, which no one really hides.

The current president of Kazakhstan, Kassym-Zhomart Tokayev, has tried to balance on these sentiments. On the one hand, he demanded that foreigners and local workers receive equal pay. On the other, he played along with the opposition nationalists, saying that "disagreement is not necessarily destructive."

Against such an emotional background of the nation, US Secretary of State Mike Pompeo came to Kazakhstan. The overseas guest did not hide the purpose of his visit: to drive the largest possible wedge into the relationship between Nur-Sultan and Beijing. As usual with the Americans, Pompeo, in addition to the country's leaders, met "with the public."

In this case, these were ethnic Kazakhs from China, whose relatives were allegedly in “political re-education camps” in Xinjiang. At a press conference with the Minister of Foreign Affairs of Kazakhstan, Mukhtar Tleuberdi, Pompeo called on the authorities of the republic "to provide asylum to those who want to flee China."

At other meetings, the American guest clicked on the fact that Chinese investments in the long term harm the development of Kazakhstan, as "they turn into costs in relation to sovereignty." In contrast to China, Pompeo exhibited America. He assured, "the best results are obtained when countries enter into partnerships with American companies."

Like Trump, the Secretary of State excitedly praised the United States: “You get honest deals. Get new jobs. Get transparent contracts. You get companies that care about the environment and an unrivaled commitment to quality work. ”

In Nur Sultan there was still a lot of similar rhetoric. The owners reacted to her restrainedly. They did not want to quarrel with neighbors. The opposition is another matter. In the past six months, it has replenished powerful figures knocked out of the power elite and even entire clans. Tokaev replaced them with a “young Oxford shoot” that speaks English better than Kazakh. Even without work and life experience, but completely immersed in Western values.

The old frames did not want to leave without a fight. They curtsied Pompeo and demonstrated their strength to Tokaev, having started a pogrom of the Chinese ethnos in Kazakhstan. Now the authorities have taken control of the situation. Calling the Dungan from Kyrgyzstan back home. The society is convincing that there was only a domestic conflict in Masanchi.

Someone believes this, someone does not. We are not talking about the nationalistic moods of local Kazakhs at all. So, this infection can again manifest itself as pogroms. After all, you can’t hide the fact that people appeared in Kazakhstan who are interested in such a policy. After the visit of Secretary of State Pompeo, they now have someone to lean on.

We are in Yandex Zen
China, the Xinjiang issue and the Islamic State
Kazakhstan today: what is happening in the underbelly of Russia?
83 comments
Information
Dear reader, to leave comments on the publication, you must to register.