Air-to-air weapons for the Mi-28 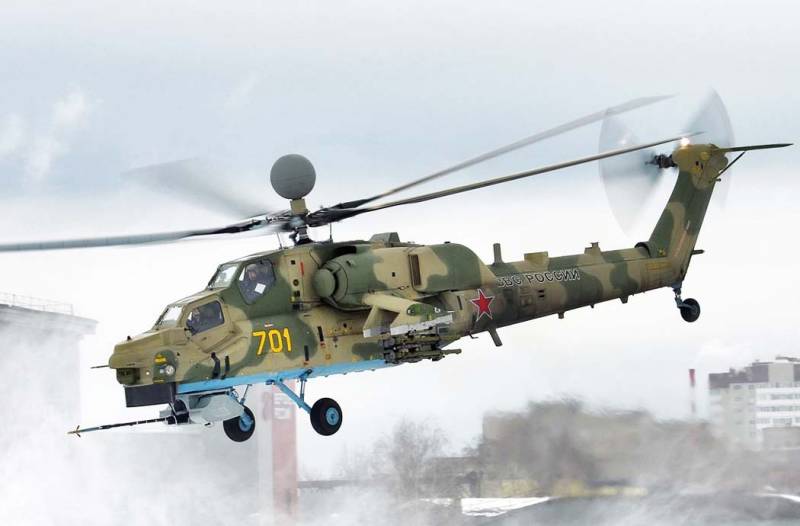 Modern attack helicopters of the Mi-28 family have a wide range of guided and uncontrolled ammunition for various purposes. The main part of the weapons is intended to destroy various ground targets. Air-to-air systems are also provided, with the help of which the helicopter is able to defend itself from attack or to launch the first strike.

One of the distinguishing features of the Mi-28 helicopters is the fixed movable gun installation NPPU-28. The unit of a characteristic type is suspended under the bow of the fuselage and carries an automatic gun 2A42 caliber 30 mm. The installation is included in the control loops. weapons and works synchronously with sighting devices.

NPPU-28 drives provide horizontal aiming at an angle of up to 110 ° to the right and left of the axis, as well as vertical at 13 ° up and 40 ° down. Ammunition from 250 shells 30x165 mm is placed in the side boxes of the installation; two-way selective supply of ammunition. Ammunition includes armor-piercing and high-explosive shells. 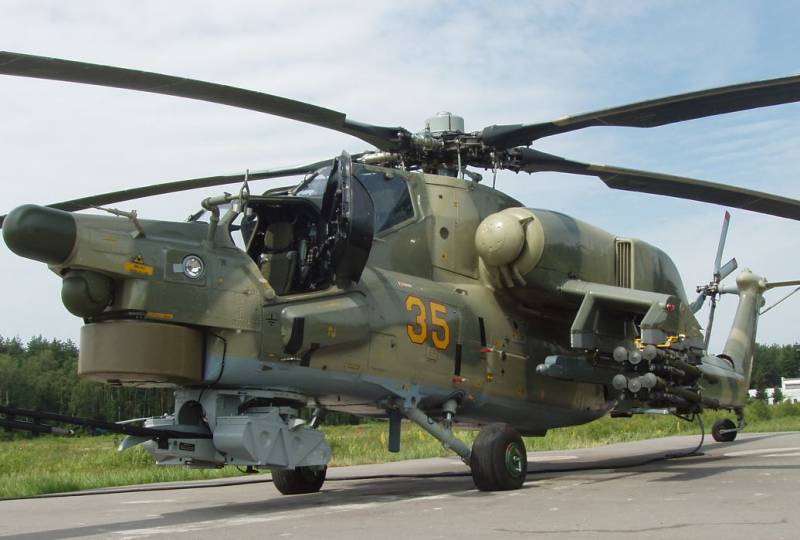 Mi-28N with similar weapons. Photo NPK "KBM" / kbm.ru
The main objective of NPPU-28 is to attack lightly armored ground targets, the protection of which can be penetrated by a 30-mm shell. Such targets are confidently hit from 1,5 km. Possible shooting at "soft" targets from 4 km. NPPU-28 also allows you to deal with low-speed air targets like helicopters or some aircraft. Effective shooting in this mode is provided at ranges up to 2-2,5 km.

Sagittarius with the Needle

The main air-to-air armament of Mi-28 helicopters of all modifications at the moment is the Sagittarius system - a set of equipment and launch modules for the integration of Igla or Igla-S anti-aircraft guided missiles. With the help of such devices, a helicopter or other carrier gets the opportunity to detect and attack air targets on overtaking and oncoming courses.

KAM "Sagittarius" includes two main components: a universal starting module and control and communication equipment. The composition of the components for a particular media is determined by the customer in accordance with the existing requirements. So, on Mi-28 helicopters, dual launch modules with a common set of control equipment are used. The modules are suspended under the wing, and the control unit is mounted inside the machine.

The universal launch module is a device with the necessary devices for preliminary target detection and mountings for two TPKs with SAM. One such module without rockets weighs no more than 40-41 kg; the weight of control equipment is less than 5 kg. 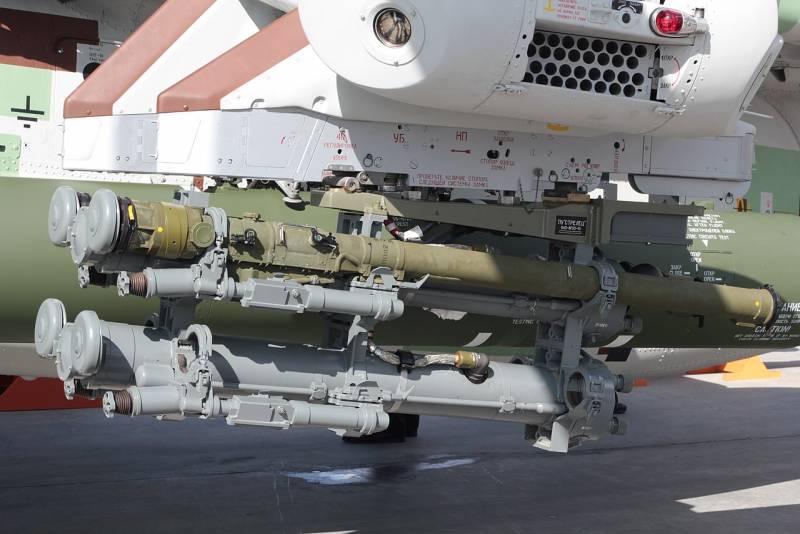 Two modules "Sagittarius" close-up. On the upper installed TPK with missiles, the lower mount is empty. Wikimedia Commons Photos
When using Sagittarius, the Mi-28 helicopter gets the opportunity to attack air targets at distances of up to 5-6 km (depending on the type of SAM). Target speed - up to 400 m / s, reaction time - from 6,6 sec. Shooting is provided in several modes: single launches, sequential or paired from both sides simultaneously.

According to recent reports, the newest modification of the Mi-28NM helicopter will receive a new air-to-air defense system. The expected expansion of the range of ammunition will allow the helicopter to conduct air combat more effectively against targets of different classes.

On February 10, Izvestia reported that the Ministry of Defense made a fundamental decision to equip attack helicopters with a R-74M short-range missile. Work in this direction has already begun, and now industry needs to solve several important design problems. Moreover, the positive consequences of such undertakings are already clear.

The R-74M missile, according to known data, is capable of attacking targets from a distance of up to 40 km. It is intended for firing at aircraft, helicopters, UAVs and high-precision weapons of a number of classes. Guidance on the target is provided at any time of the day and in any weather conditions. However, high performance comes at a price. At one point of the wing suspension, only one rocket is placed. 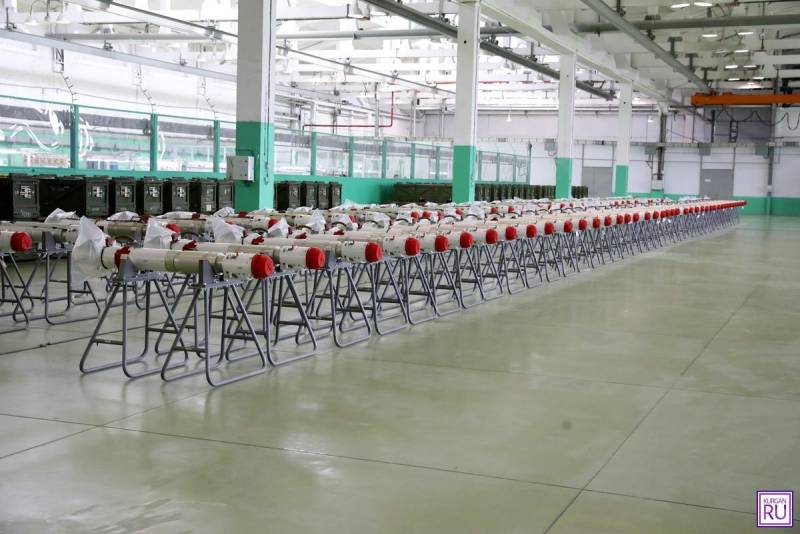 R-74 missiles at the Kurganpribor enterprise. Photo Kurgan.ru
It is curious that the R-74M is still featured in the news about the Mi-28NM. Such a helicopter has some features that can more fully reveal the potential of a promising missile. Mi-28NM is the first in its family to regularly receive the sub-submarine radar N025, intended for conducting all-round visibility and detection of ground or air targets. Detection range - up to 20 km; tracking of several targets with simultaneous shooting is provided.

Thus, the H025 station will allow the helicopter to monitor the air situation and identify threats at a considerable distance. Then the Mi-28NM will be able to launch the R-74M rocket and hit the detected target - including at distances close to the maximum detection range.

The introduction of the R-74M in the ammunition should increase the potential of the Mi-28NM in the context of self-defense. In some situations, such a missile will allow to strike the first blow. Possible shooting at external target designation with the capture of the target after launch and other methods of application. In all cases, new weapons with enhanced characteristics will show serious advantages over existing products. In fact, an attack helicopter will be able to take on part of the tasks of fighter aircraft - at least in certain situations.

It should be noted that the installation of air-to-air missiles on attack helicopters has long become commonplace. In battle, there is a risk of collision with enemy fighters or helicopters, and self-defense facilities are needed. However, approaches to solving this issue may differ. First of all, this applies to missile weapons. 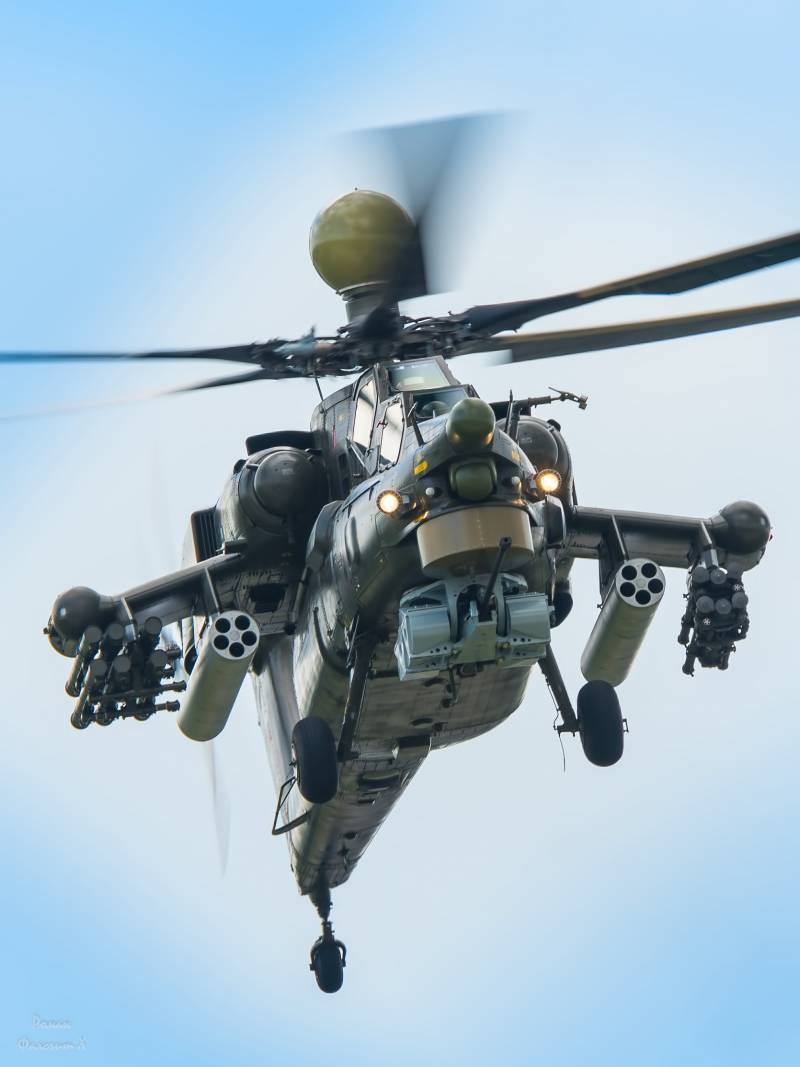 Mi-28N helicopter with weapons for attacking ground and air targets. Photo "Helicopters of Russia" / russianhelicopters.aero
Soviet and Russian Mi-24 helicopters of various modifications are equipped with machine guns or cannons and are capable of carrying short-range R-60 or Igla missiles. The latter are borrowed from serial land-based MANPADS. A similar approach is used by foreign aircraft manufacturers. For example, the Eurofighter Tiger European combat helicopter uses a 30-mm cannon for air combat, as well as Stinger or Mistral missiles. Both missiles are borrowed from MANPADS.

A curious approach is used by the US Air Force. Their AH-64 Apache helicopter carries AIM-92 Stinger MANPADS and can also be equipped with aviation short-range air-to-air missiles AIM-9 Sidewinder of various modifications. The possibility of introducing other weapons with different characteristics was considered.

Russian helicopters of the Mi-28 family generally correspond to domestic and foreign approaches to self-defense, although noticeable differences are outlined. At the moment, the most effective means of combating air threats for the Mi-28 of all modifications remains KAM Sagittarius with missiles of the Igla line. With this kit, a helicopter can control a zone with a radius of 5-6 km.

However, in the future, allegedly, the latest modification of the Mi-28 will receive a promising air-to-air missile with a range of 40 km. This can dramatically change the combat capabilities of the helicopter. It will become not just a difficult target, but also a real threat to enemy fighters or helicopters. Thus, thanks to new weapons, helicopters will become even more dangerous for ground and air targets.

We are in Yandex Zen
Mi-28 - combat helicopter
An-12 in Afghanistan
29 comments
Information
Dear reader, to leave comments on the publication, you must to register.