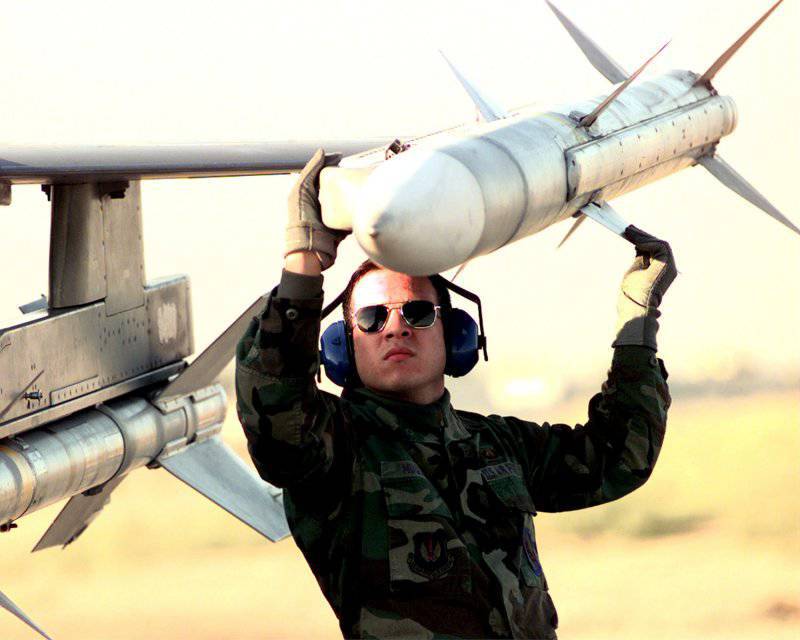 The magazine "Janes Defense Weekly" published an article stating that the problems identified with the solid-fuel engine of the main American aviation Raytheon AIM-120C AMRAAM medium-range air-to-air missiles have led to the fact that these missiles have not been supplied to the US military aviation for about two years, and no solution has yet been found.

Problems were identified during the testing of solid fuel engines manufactured by ATK in AMRAAM under the conditions of “normal” cold temperatures. In the 2009 year, tests revealed repeated "failures" in the engine in these temperature conditions. This surprised Raytheon and ATK, since these engines have been in production since 1980, and no technological changes have been made to the composition of the fuel. In 2010, the US Department of Defense halted acceptance of Raytheon’s manufactured AMRAAM missiles and suspended payments to the corporation due to an engine issue that had emerged. This suspension is still in effect, and now Raytheon has accumulated around 800 undelivered rockets. Since AMRAAM’s shipments to foreign buyers are carried out through the FMS through the US Department of Defense, export of these missiles is in fact suspended. During this test, the engine is frozen to a temperature of -65 degrees Fahrenheit (-54 Celsius), and then turned on at the stand. ATK supplies engines in batches of 48 units, and it is standard practice for the US Department of Defense to accept nine randomly selected engines from each batch. If all nine engines work successfully, then the rest of the engines of the party go for installation for the rocket. However, unexpectedly, at this “cold” test, the engines began to consistently fail.

Despite the numerous efforts of Raytheon and ATK, the nature of the problem that has emerged remains a mystery and no solution has yet been found. The roentgenoscopy of the engines and the change in the methods of grinding and compacting solid fuel yielded no results. In May, 2012, the engine tests were again failed, and Raytheon now hopes to test a new batch of engines in August.

In connection with the problems with ATK engines, Raytheon decided to resort to installing on AMRAAM an alternative type of engine manufactured by the Norwegian company Nammo Raufoss, which successfully passed the cold soak tests. The first batch of Nammo 15 engines was produced by Raytheon in June 2012 of the year, and 400 motors must be supplied before the end of the year. However, so far Nammo’s production capacity is insufficient - the Norwegians produce only 27 engines per month, although Raytheon hopes that by the end of the year they will be able to bring the output to 100 units per month. In addition, the Nammo engines do not essentially solve the problem with the main customer of AMRAAM missiles - the US Department of Defense does not want to have a single foreign supplier of engines for these missiles.

Also in the JDW article it is said, referring to information from Rayheon itself, that the first operational test (OT) of the AMRAAM rocket AIM-120D, conducted on July 10, failed due to the failure of the control system. Prior to this, 15 AIM-120D rockets with varying degrees of success were released during the development test (DT). The development of AIM-120D continues to be seriously behind schedule due to technical problems and insufficient funding.

We are in Yandex Zen
New AMRAAMs at the Australian Air Force and the balance of power in the APR: a foreseeable trend
48 comments
Information
Dear reader, to leave comments on the publication, you must to register.