The death penalty: back - in the Middle Ages, or forward - to justice? 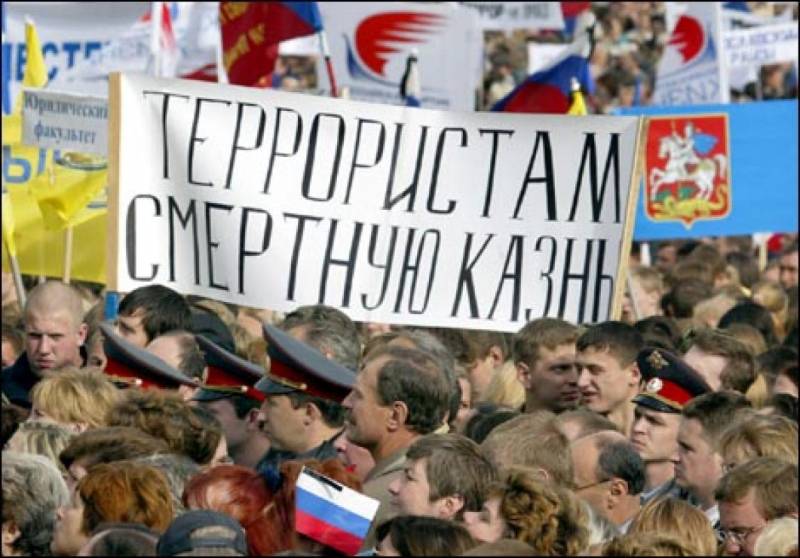 In connection with the desire declared by Vladimir Putin and supported by the Russian parliament to return the supremacy of domestic legislation over norms that are imposed from the outside through a cunning system of various “international legal documents” that contradict the interests of our country, voices are increasingly heard that it would be nice to use the moment to return and the death penalty. Does this make sense and need? Where will Russia take a step, restoring an exceptional measure of punishment: to cruelty and fear, or to restoring order in the state and returning to its life the principle of retribution of merit?


Fortunately, today there are no special reasons for a wide discussion in society on this issue. Usually it breaks out after committing cruel murders of children, committing terrorist acts and the like of crimes that law enforcement officers call resonant. Nevertheless, it would be better to solve such issues with a cold head, and not under the influence of emotions, when the next tragedy has already happened.

The topic of the death penalty is, firstly, enormous and extremely multifaceted, and secondly, it is completely overwhelmed and blabbed by amateurs and lovers of high-profile phrases. Therefore, I will be brief and simply outline the thoughts that come to mind, starting primarily from the arguments of the opponents of this type of punishment, or, rather, social protection, as, in my opinion, the death penalty was correctly called in many Soviet legal documents. Such reasons can be conditionally and generalized reduced to three main groups. The first is, of course, ethical, humanistic and similar moments in the performance of adherents of "universal values."

“The criminals are also people”, “human life is sacred”, “you didn’t give it, it’s not for you to take away”, “you cannot deprive anyone of a chance to repent and correct”, and so on. With those who profess such beliefs, I am ready to discuss only after they at least once visit the parents to identify the child who had been killed by “also a man”. In all other cases, the conversation will be pointless and useless. Regarding the “universal values”, I want to say that those who rape and kill children also have certain “values” that are important to them, which no normal person can have anything to do with. Point.

The second group of arguments is “utilitarian”. “Execution should not be allowed because of the likelihood of judicial errors,” “it in no way serves as a deterrent to criminals, but, on the contrary, almost provokes them to the utmost cruelty,” in addition to “hardening the whole society”. Academician Sakharov, who previously proposed to wash off half of the USA into the ocean with nuclear torpedoes, was especially wary of the last thesis.

Regarding the lack of preventive action: it depends on who and how to prevent. Stalin, after a certain time after the maximum tightening of criminal law, up to executions for theft, could afford to abolish the death penalty in the USSR in general. The lesson has been learned. As for judicial error, the probability of a medical error, for example, when conducting a complex operation is much higher. Will we ban? Or, nevertheless, improve the law enforcement and judicial systems, as well as increase the measure of responsibility of those whom we trust to protect and judge us?

The third group is, for the most part, casuistry of pure water. “The death penalty does not punish, it simply kills”, “not a single death has returned the life of the victim and comforted her relatives”, “she does not eliminate the causes of crime”, “those who execute the death sentences become the same as those they execute.” .. It's all just sophistry, with which arguing is useless in principle.

In conclusion, I will allow myself to express my own opinion, namely to explain why I consider the death penalty not just acceptable, but necessary. Social protection is the key. Anyone who has crossed the line of humanity with his deed of justification should not be punished (for certain things, an adequately severe punishment simply does not exist), but simply crossed out, eliminated, erased so that he does not even have one chance per million to repeat what he has already done once. Neither having entered the amnesty, nor having been freed because of the natural disaster that destroyed the prison ... Never. With this, and only this, millions of normal people will be truly reliably protected.

Moreover, the corpus delicti for which the death penalty may be imposed in domestic law is perhaps worth revising. What about drug dealers, for example? Often, it is not necessary to execute - there was such a wonderful thing in Russia as hard labor. Maybe worth a return?

The death penalty in our state has not been abolished, not removed from the criminal law. The entire “moratorium” on it rests on the signed Protocol No. 6 to the Convention for the Protection of Human Rights, which, incidentally, was never ratified in the Decision of the Constitutional Court of Russia. There is talk that now, in order to rid society of villains, “we need to change the Constitution,” no more than profanity. Moreover, just the Basic Law is about to be edited in the near future. Using this moment, Russian society may well demand fair protection for itself and its children - there would be a will and determination.

We are in Yandex Zen
Difficult talk about the death penalty in Russia
Results of the week. "God forbid to see Russian revolt, senseless and merciless!"
170 comments
Information
Dear reader, to leave comments on the publication, you must to register.