Domestic T-72B3 in comparison with the Ukrainian T-72AMT. What did the experts of the Russian Arms miscalculate? 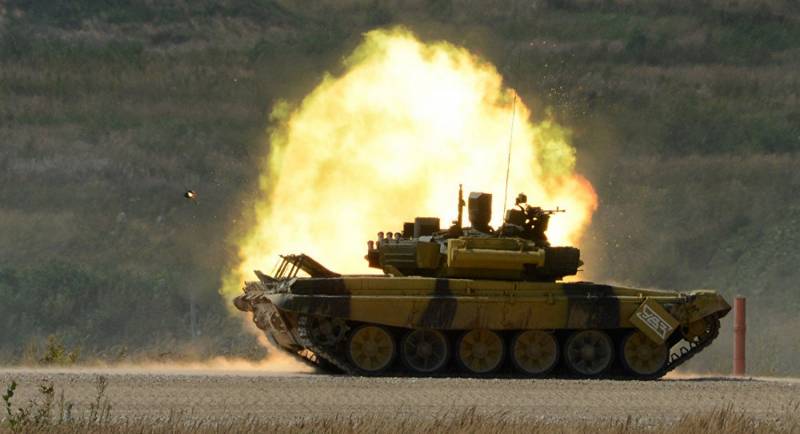 A week earlier announced by the Ukrainian resource depo.ua, the start of deliveries to the combat units of the APU of the deeply modernized T-72AMT MBTs did not become the subject of close attention on the part of domestic news and military-analytical portals. And this is not surprising, because the information received from informed sources in the defense ministry was “independent” and was published in a characteristic manner embellished to the bone with anti-Russian political and military observer Ruslan Rudomsky, who gained fame in the Ukrainian media space in the wake of the escalation events that took place in the Donbass over the past 5 years.


Over the past few years, this pseudo-expert presents with an enviable regularity for consideration by an uninformed Ukrainian audience a distorted picture of the operational and tactical situation in the Donbass theater, attributing to the Ukrainian paramilitary forces nonexistent “breakthroughs”, which consist in “occupying strategically important dominant heights near Gorlovka”, then the implementation of “successful offensive throws in the direction of the cemetery, located on a hill between n.a. Noises and South ”, then in successful operations against the 1st and 2nd army corps of the LPR in the Novo-Azov and Debaltsev operational directions in the area of ​​the“ gray zone ”.

Moreover, early information about the start of firing tests and the upcoming operational readiness of the modernized main combat tanks T-72AMT (an updated version of the T-72A removed from conservation), published back in August 2018, was already becoming food for thought by experts of the rg.ru portal (Russian weapon”) As part of the preparation of the notorious comparative review“ T-72B3 vs T-72AMT: Russian and Ukrainian tanks were compared in Vietnam ”.

The authors of this material, Alexei Brusilov and Alexey Moiseev, tried to refute the opinion of Vietnamese colleagues expressed in a similar review on the Vietnamese portal baodatviet.vn about the maximum compliance of the main battle tank T-72AMT with the criterion of "cost-effectiveness" in comparison with the Russian T-72B3 of the 2016 model Noting the significant lag of the brainchild of the state enterprise “Kiev Armored Plant” both in terms of the level of optoelectronic architecture of sighting systems and the tank information and control system, and on the level of bronezaschischonnosti feathered armor-piercing shells and cumulative, and firepower.

Indeed, the Ukrainian version of the modernization of the T-72A is not able to oppose the armaments of the T-72B3 that are in service with the Russian army. 2016, not a single technological “trump card”, consisting either in a more advanced weapon, or in a wider list of optoelectronic sighting devices, or in the integration of a more advanced tank information-control system with additional adjustments for a more filigree implementation of firing modes. In particular, despite the equipping of the observation devices of the TKN-3UM commander and night vision devices of the driver TNK-72 / TVN-4BUP with the 3rd generation electron-optical converters, the T-72AMT drill rigs are still equipped with outdated night sighting systems gunner 1K13-49 "Neman" with a target detection range of the type "tank" no more than 1200 m at night (in active mode, using an IR illuminator) and about 500-600 m (in passive mode, without using IR spotlight), while the T-72B3 mod. 2016 can boast of the presence of modern multi-channel gunner’s sights “Sosna-U”, providing duplicate control of the armament of tanks both through gunner’s terminals and with the help of automated workplaces of vehicle commanders. And all this at a range of about 2700-3000 m at night.

As you can see, the technological gap between the SLAs of both machines is very substantial. So, at first glance, the information voiced by Ruslan Rudomsky about the start of deliveries to the APU of the updated T-72AMT has practically no specific weight in either the information or operational tactical planes.

Nevertheless, there is one more parameter, according to which the Ukrainian modification of the T-72AMT is practically not inferior to the T-72B3 mod. 2016 and, unfortunately, significantly surpasses the T-64BV and T-72A / AB / B / B1, which are in service with motorized rifle units of the 1st and 2nd army corps of the NM of Donetsk and Lugansk People's Republics and equipped with the Contact-1 DZ /5". We are talking about equivalent resistance to armor-piercing feathered subcaliber and cumulative projectiles in the frontal projection. An objective assessment of this particular parameter was not able to properly conduct the journalists of the publication "Russian weapons" Alexei Brusilov and Alexei Moiseev.

Considering the fact that the physical dimension of the frontal armor plates of the T-72AMT tower (identical to the dimensions of the Object 176 tower, the early T-72AMT) is represented by a 3-layer barrier based on the outer and rear steel armor plates with a central special armor package of sand rods with a total equivalent resistance to BOPS of 500 mm, the placement of additional elements of dynamic protection HSChKV-19/34 “Knife” on the frontal armor plates forming increases the resistance to kinetic cores of BOPS to 800–850 mm, which not only meets, but also exceeds about the level of armor protection T-72B3 arr. 2016, the front projection of which is still covered by elements of the “Contact-4” dynamic protection 22C5.

As you know, due to the implementation of a more effective method of counteraction by means of flat cumulative jets, the EDZ hschkv-19/34 “Knife” provides a 90% reduction in the kinetic energy of the cores of armor-piercing shells, while the 4C22 modules of dynamic protection “Contact-5” using the principle of throwable metal plates, provide only a 20% reduction in armor penetration BPS. It is logical to assume that the T-72B3's frontal projection equivalent resistance from BPS is at 650 mm, barely providing protection against the obsolete American 120-mm M829A1 BPS. Moreover, it is well known that there are impressive 5-70 mm gaps between the "wedge-shaped arches" of the elements of Contact-80 DZ, which even the good old ZBM-33 "Vant" and ZBM-44 "Mango" can penetrate into all the ensuing consequences; especially in the case of getting into the most vulnerable area near the mask of the gun.

Conclusion: the most effective method of increasing the armor protection of modernized domestic MBTs of the T-72B family in the frontal projection is to equip the Relic dynamic protection elements 4C23 tightly adjacent to each other, reducing the “piercing” capabilities of kinetic projectiles by at least 50%. A similar concept was implemented in the unique T-72B “Slingshot” project, which has not reached operational operational readiness for ten years since the field tests of the first prototype.

We are in Yandex Zen
Kerch parade "ahead of the curve" or "last Chinese warning"? “Kherson chaos” and escalation in LDNR
Further development of the main battle tank
82 comments
Information
Dear reader, to leave comments on the publication, you must to register.