The End of the Beautiful Era

The founder of the American venture aerospace company Paul Allen (many probably remember him as a co-founder of Microsoft Corporation) died on October 15, 2018 at the age of 65. Together with him, the idea of ​​creating a universal tool for launching spacecraft by the air start method went away — when the separation of a rocket or a spaceship from the carrier occurs at a significant height, after which the spacecraft gets to its destination on its own.

The main brainchild of Stratolaunch Systems can be called the Scaled Composites aircraft developed by the Scaled Composites Stratolaunch Model 351 aircraft, which was supposed to act as the very carrier. To fulfill the complex role, the machine received a two-body design and six Pratt & Whitney PW4056 twin-circuit turbojet engines. With a wingspan of 117 meters, the aircraft can, with certain reservations, be called "the largest in the world." Well, or certainly - the widest. And he can lift into the air as a payload a mass of 250 tons.

Stratolaunch's plans, it must be said, were truly Napoleonic. In 2018, the company showed the concepts of new spacecraft to launch from a carrier aircraft. It was a Medium Launch Vehicle (MLV) rocket with a carrying capacity of 3,4 tons, an MLV Heavy rocket capable of carrying six tons and a Space Plane, similar to the notorious Boeing X-37. Stratolaunch said it sees Space Plane as a reusable ship. 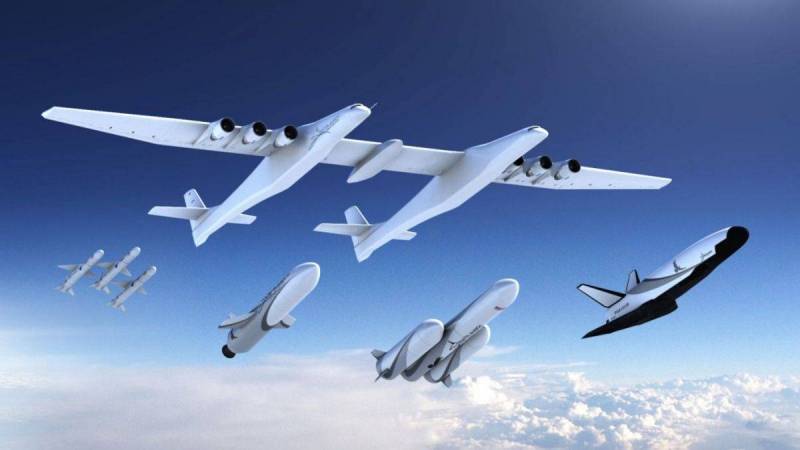 All this seemed too good to be true. Rather, too ambitious. In January 2019, it became known that Stratolaunch abandoned the creation of rockets and engines, leaving, however, with it the design of the carrier aircraft. The company also laid off some employees: according to sources, 50 people fell under the reduction.

Further problems went on increasing, although on April 13, 2019, after long ground tests, the Scaled Composites Stratolaunch Model 351 nevertheless took to the skies. Already in May, it became known that Stratolaunch is in the process of closing and will sell all of its physical assets and intellectual property rights. Soon a buyer was found.

At the service of Uncle Sam?

Further история looks like a detective. In December 2019, The Drive wrote that the new owner of the Stratolaunch project was a person close to Donald Trump and connected with the US military-industrial complex. We are talking about billionaire Steve Feinberg, who owns Cerberus Capital Management. This is an investment company engaged in the purchase of troubled companies with a view to their further reorganization and profit. To make it clear, over the past few decades, Cerberus Capital Management bought such well-known manufacturers as Remington and Bushmaster.

Experts then almost directly associated this with the development of hypersonic weaponsbeing actively conducted now in the USA. Another is more interesting. Long before that, Quartz specialists stated that the Stratolaunch Model 351 was a secret military project. The argument is simple: an air launch has never been, is not, and probably will not be in demand from commercial firms. Especially, in light of the active development of rocket scientists such as SpaceX and Blue Origin. So from the point of view of the stated goals, the project was probably initially devoid of any meaning. But the presence of a carrier aircraft made it possible to put military spacecraft into orbit, without reference to weather conditions and the readiness of the spaceport. 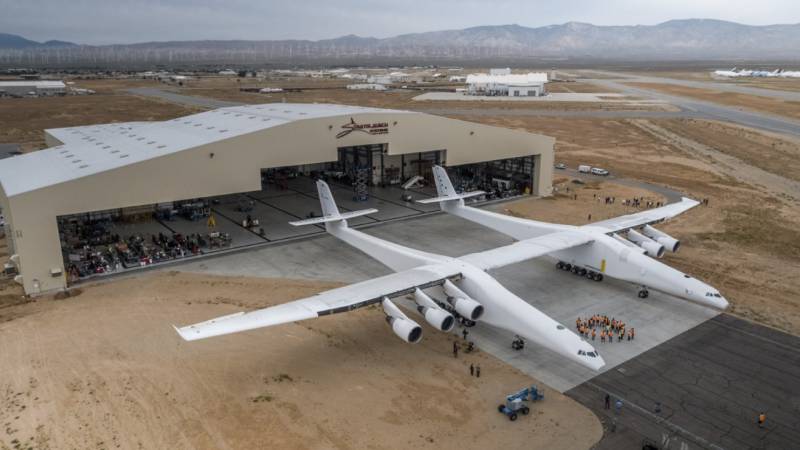 The devices are planned to be equipped with deltoid wings with a large sweep along the leading edge. At the wingtips, vertical stabilizers and rudders will be placed. Both devices should receive liquid-propellant rocket engines running on a hydrogen / oxygen fuel mixture, but the prospects for creating engines are all the more obscure after a formal abandonment of their development. Hyper-A and Hyper-Z should land like regular planes, which dramatically increases their versatility. 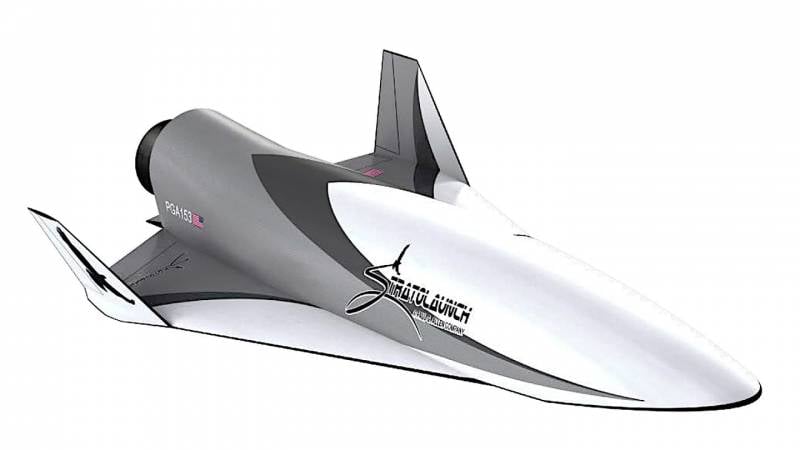 One would think that both hypersonic rocket planes have sunk into oblivion, in the wake of the rockets mentioned above. However, it is not. In January 2020, Stratolaunch confirmed the development of hypersonic aircraft. “Stratolaunch is studying the development of aerospace vehicles and the technologies needed, including for reliable, regular access to space. This study includes an analysis of the need to significantly expand the country's capabilities in the design and operation of hypersonic vehicles, ”said company representative Art Pettigrew in a statement sent to GeekWire.

Of course, it is still difficult to draw concrete conclusions about the state of Stratolaunch and the direction of its work. One thing is obvious: the company has the means and development strategy, within the framework of which promising hypersonic devices are created. It is important to note that since the change of ownership, the company began to recover. In his December 10 tweet, Jean Floyd, president and CEO of Stratolaunch, said the company grew from 13 to 87 employees in two months. Floyd also noted that the company's mission is to "be the world's leading provider of high-speed flight test services." 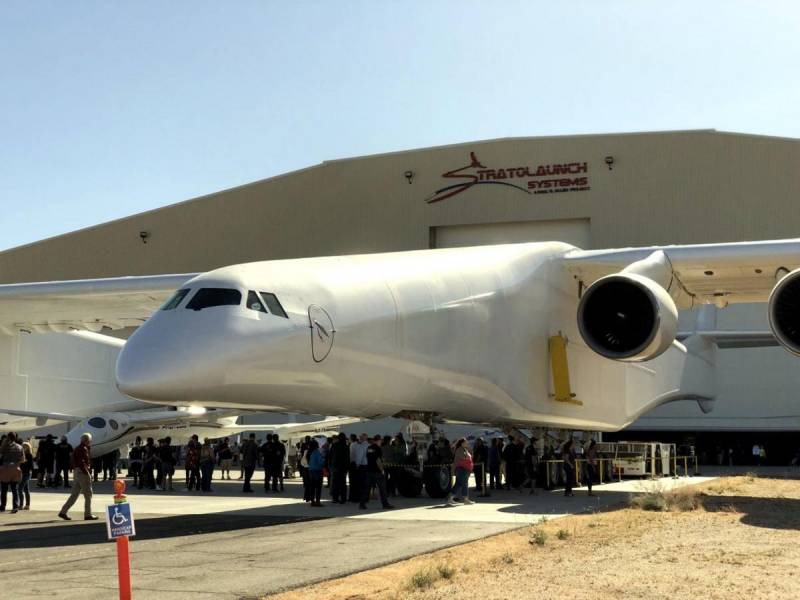 It is impossible to speak with confidence about the purpose of high-speed systems. But experts say that the United States now does not have reliable means that would make it possible to perform a wide range of tests in the field of microgravity and high-speed atmospheric flight: until 1968, these tasks partially lay on the shoulders of the X-15 rocket plane.

As The Drive rightly notes in its Stratolaunch Was Crafting Hypersonic Vehicles Before Its Official Pivot To High-Speed ​​Testing, even if Stratolaunch has no clear plans to build any of the complexes described above, the experience gained during their development, would be very valuable in the context of the company's new orientation on hypersonic testing services. Whether this will help the Americans to create new hypersonic weapons, time will tell.

We are in Yandex Zen
Deceptive maneuver: the largest aircraft in the world can be the US secret weapon
An-12 in Afghanistan
67 comments
Information
Dear reader, to leave comments on the publication, you must to register.