In 1960, the experimental heavy tank Object 279 was launched for testing. It differed from other machines of its class in its unusual design and characteristic appearance. Subsequently, all this helped tank gain wide fame. Specific design solutions were used to enhance the basic characteristics and provide advantages over competitors. And, as tests have shown, such measures generally justified themselves - although they led to the appearance of specific shortcomings.

Recall история "Object 279" began in 1955-56, when it was decided to create a promising heavy tank. According to the requirements of the army, this machine for protection and armament had to surpass existing models and be distinguished by increased mobility for working on complex landscapes. At the same time, the combat weight was limited to 60 tons.

One of the options for such a tank with an index of "279" was developed under the guidance of L.S. Troyanova in the framework of cooperation of the Leningrad Kirov Plant and VNII-100. Design continued until 1959, and in 1960, the first prototype was launched for testing. Two more prototypes were not completed due to changes in plans.

General view of the tank. Scheme from the book "Domestic Armored Vehicles, XX Century", t.3
Unlike other heavy tanks, the Object 279 was developed from scratch and only based on new original solutions. This affected its design and appearance, and also allowed to fulfill all customer requirements. As a result, the tank received serious advantages over other samples of domestic and foreign development.

Specially for the “Object 279”, from scratch, they developed the original armored hull and turret with a level of protection unique to that time. The frontal projection of the tank could withstand the hit of a 122-mm armor-piercing projectile with an initial speed of 950 m / s or 90-mm cumulative ammunition. Reservations accounted for more than half of the tank's combat weight - 32 tons.

The body was welded from four large-sized cast parts of complex curved shape. A non-removable anti-cumulative screen was installed around the perimeter, giving the case a characteristic shape. The frontal part of the hull had the greatest thickness - from 93 to 265 mm in different areas. Due to bends and rational tilt angles, the reduced thickness of the armor increased significantly, providing protection from all relevant and perspective angles.

Reservation of the hull and tower. Scheme from the book "Domestic Armored Vehicles, XX Century", t.3
The frontal and side projections of the cast tower received protection from 305 mm (bottom) to 217 mm (top); the roof was 30 mm thick with a characteristic curved shape. For additional protection, the epaulettes of the tower were slightly sunk inside the roof of the hull. Due to this, the junction of the tower and the hull was covered from shells.

According to the general characteristics of armor protection, the “Object 279” is considered the best among domestic heavy tanks. In addition, in these parameters it was not inferior to the later main battle tanks, including with combined protection.

The basic one weapons "Object 279" was a rifled gun M-65 caliber 130 mm, equipped with an ejector and a muzzle brake. It could accelerate an armor-piercing projectile to 1050 m / s, which made it possible to penetrate 2 mm of armor at a range of 245 km (0 ° meeting angle). Also provided firing from closed positions at a distance of more than 12 km.

Fire controls included the TPD-2S stereoscopic rangefinder sight, TPN night sight, and the Thunderstorm two-plane stabilizer, which sharply increased the accuracy of the fire. The sighting complex provided for some automation equipment, which was widely used only in later projects.

The M-65 gun is the basis of the Object 279’s firepower. Figure Dogswar.ru
The ammunition included only 24 rounds of separate-shell loading, which was associated with small volumes inside the tank. In this case, part of the ammunition was placed in a mechanized installation. An electromechanical rammer was also provided. All this allowed to bring the rate of fire to 5-7 rds / min.

As an additional weapon was used KPV heavy machine gun coaxial with a cannon. It could be used against manpower, unprotected and lightly armored vehicles. It also provided for firing for shooting before using a gun.

Thus, the "Object 279" combined the high characteristics of the guns and a successful SLA with wide capabilities. No less effective was the additional weapons. The only drawbacks of the armament complex were the small ammunition load of the gun and the significant departure of the barrel.

The experimental tank was equipped with a 2DG8-M diesel engine with a capacity of 1000 hp, connected to a single-flow hydromechanical transmission. With the help of the latter, the power “descended” from the body to the driving wheels handed out under the bottom. The tank received four driving wheels at once - one per track. 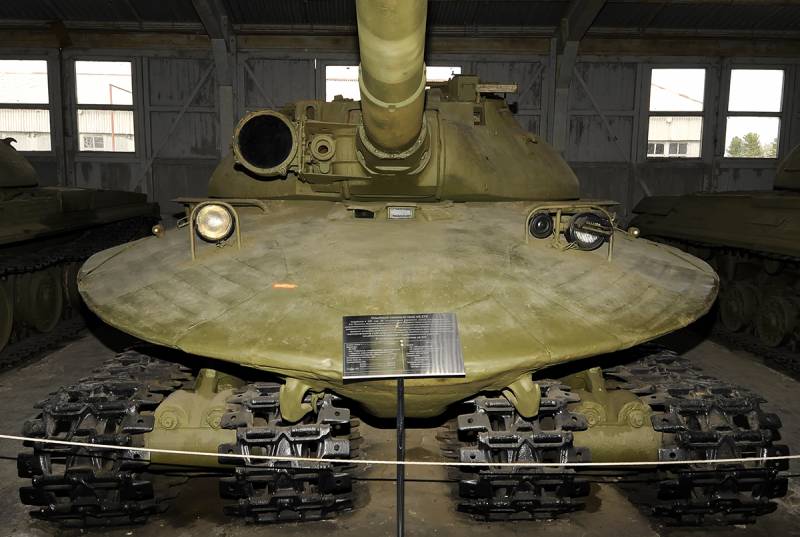 "Object 279", front view. The special contours of the hull and all four tracks are clearly visible. Wikimedia Commons Photos
The original chassis was based on two longitudinal beams placed under the bottom. They installed 24 road wheels (6 per track) with independent suspension. Initially, an uncontrolled hydraulic suspension was used. Then made and tested pneumatic units. Each set of rollers carried its own track of 81 tracks with a width of 580 mm. It is curious that the chassis of the Object 279, despite its complexity, weighed 10 tons and was 500 kg lighter than the chassis of the T-10 heavy tank.

With a specific power of 16,7 hp per ton tank "279" developed a speed of up to 55 km / h. The unusual undercarriage made it possible to reduce the specific ground pressure to 0,6 kg / cm76 - the PT light tank had about the same characteristics. The distance between the tracks was minimal, due to which the tank did not dare to catch the bottom of the soil. All this positively affected the patency and mobility of the tank on soils with low bearing capacity.

The mobility of the tank increased due to the availability of equipment for underwater driving. It included several means, including 4,5 m high manhole tube for mounting above the loader hatch. With such equipment, “Object 279” could overcome water obstacles several meters deep. Without preparation, fords crossed 1,2 m deep.

For all its advantages, Object 279 had a number of significant drawbacks. Some of them could impede production and operation, while others threatened to deteriorate combat qualities. However, these factors hardly affected the real prospects of the project. 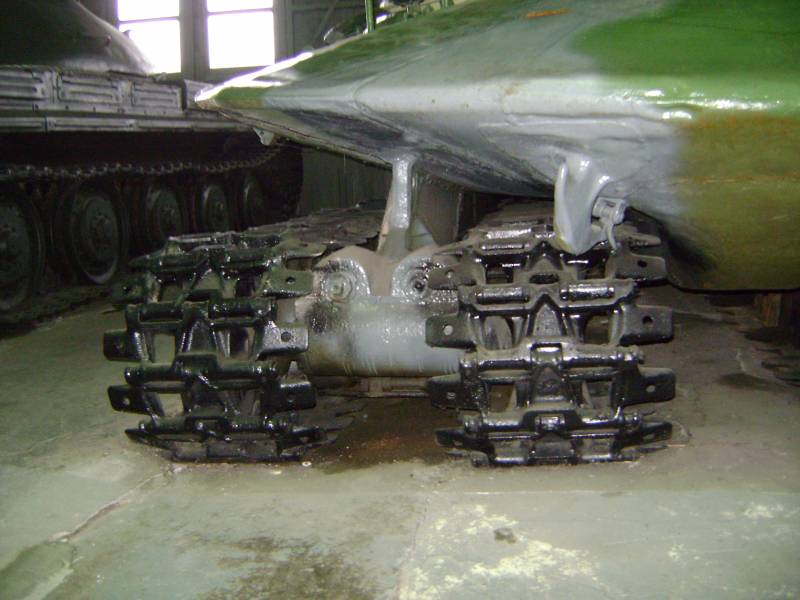 Two right caterpillars close-up. Wikimedia Commons Photos
The need to combine a high level of protection and limited mass led to a sharp reduction in the internal volume of the hull and turret - up to 11,5 cubic meters. Of these, 7,6 cubic meters were in habitable compartments and 3,87 in the power department. All this led to difficulties in the layout of the units, and in the future could complicate the modernization of the tank. In addition, due to the tight layout, the defeat of an armored car could lead to more serious consequences than in the case of other equipment.

The armament complex of Object 279 was effective and powerful, but at the same time complex and expensive. Left much to be desired ammunition, the increase of which required serious processing of the entire fighting compartment. When driving on difficult terrain, the flight of the gun turned into a problem. The barrel was almost 3,5 m from the nose of the hull, which threatened to be stuck in the ground.

The four-track chassis was overly complex to manufacture and operate. Any maintenance of the units turned into a complicated procedure requiring special equipment. During the tests, insufficient reliability of the existing suspension was noted. Also, when driving on soft soils, excessive power losses in the propulsion were observed. When turning off-road, caterpillars could bury themselves in the ground, increasing resistance to movement. Finally, the chassis was highly vulnerable to explosive devices - combined with low maintainability.

Thus, a number of characteristic advantages of “Object 279” was accompanied by a number of significant disadvantages. Some of them could be corrected during fine-tuning, but others required serious processing of the entire structure. Already in 1960, some measures were taken, and soon the second and third experimental tanks with a modified design could go on the test. 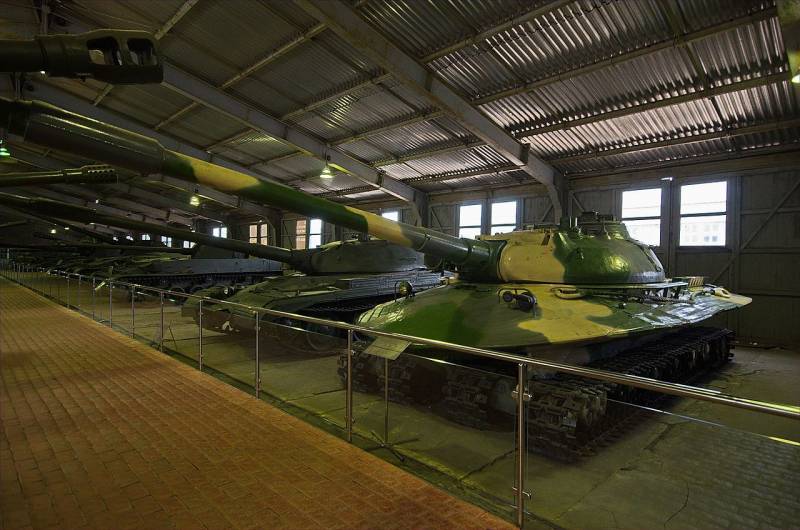 "Object 279" in the armored museum of Kubinka. You can evaluate the proportions of the structure, including gun length - his muzzle brake was left overs. Wikimedia Commons Photos
However, they did not begin to be sent to the landfill. In the same 1960, the country's leadership decided to abandon the development of new heavy tanks. The future of this class of armored vehicles was in doubt, and this issue was solved in the simplest way. Industries were ordered to develop the medium tank direction - a few years later this led to the appearance of the MBT class.

The project with the “279” index used a number of bold and original solutions aimed at improving the basic tactical and technical characteristics. Some of these ideas were subsequently developed and used in new projects. Other decisions have remained in history, including due to obsolescence and the appearance of more successful ones.

The greatest interest with t.z. further development and application represented solutions in the field of fire controls. The original reinforced reservation design of Object 279 was no longer used. Instead, in new projects used combined armor, which had a high level of protection with limited weight. The four-track chassis also did not get into new projects - due to unjustified complexity.

“Object 279” has remained one of a kind. He did not go into the series and did not become the basis for new technology. However, in such a situation, this unique model could affect the further development of our armored vehicles - showing the advantages of some solutions and the disadvantages of others.

We are in Yandex Zen
Is the old well forgotten to become the new? Part-2. By call of honor and duty
The fire control devices of the Soviet and German tanks of the Second World War. Myths and Reality
71 comment
Information
Dear reader, to leave comments on the publication, you must to register.