One of the experienced rifles ZB-530, the store is removed. Photo Palba.cz

In the early fifties, Czechoslovakia began to create a new family of small arms. weapons under an intermediate cartridge of 7,62x45 mm of own development. One of the representatives of the new family could be an automatic rifle ZB-530, developed on the basis of one of the most successful serial machine guns. However, this sample was never brought to mass production.

Czechoslovakia had a well-developed defense industry, which was planned to be maintained and developed in the future - by limiting foreign participation in the rearmament of its army. As part of this course, new ammunition was created, as well as various types of weapons and military equipment. In 1952, an intermediate cartridge of 7,62x45 mm vz.52 added to the list of independent Czechoslovak developments.

The new cartridge took into account foreign - primarily Soviet - experience in the creation of ammunition, but implemented new ideas in a slightly different way. In the same 1952, work began on the creation of promising weapons under the cartridge, designed to replace obsolete systems. The possibility of creating a self-loading carbine, automatic rifle (machine gun) and light machine gun was considered.

Soon all the major Czechoslovak arms organizations joined the program. One of the participants was Zbrojovka Brno. Under the guidance of renowned designer Vaclav Holek, it developed an automatic machine with the working designation ZB-530. In the future, this product could go into service.

The ZB-530 project was based on a curious idea. Back in the mid-twenties, the team of V. Holek created a very successful machine gun ZB vz.26, later adopted by a number of countries. It was proposed to use such a machine gun as a source of solutions combined with new ideas and components. All this led to a certain external and internal similarity of the two samples.

The machine has retained the characteristic layout of the basic machine gun and the corresponding appearance. The store’s receiver was left on top of the receiver, and therefore only the control handle was placed on the bottom. Automation has undergone refinement, as a result of which a gas pipe disappeared from under the barrel. The principles of the weapon remained the same.

Another prototype of the ZB-530 assault rifle - the store is joined. Photo Guns.fandom.com
The ZB-530 was built on the basis of a stamped receiver of complex cross-section, with a closed removable lid on top. Only the trunk went beyond the front cut of the box; elements of a gas engine were placed inside it. The main volume of the box was given under the bolt group and return spring, partially extended inside the butt.

The ammunition system was built on the basis of detachable box magazines with 30 rounds. As on the basic machine gun, the store joined the weapon from above. The store's receiver was a little tall; behind it was a magazine latch. The ejection of shells was carried out to the right through the window of the receiver. The location of the receiver and the location of the moving parts with certain reservations made it possible to classify the machine as a “bullpup” class.

The trigger mechanism for the ZB-530 retained the capabilities of the previous design. It provided single and automatic fire, and also blocked the descent. Fire control was carried out by a traditional trigger. The translator-fuse is located above the control handle on the left side of the weapon.

An adjustable sight was placed on the front of the store’s receiver. Due to the specific location of the store, the whole pillar had to be moved to the left. The fly in the ring muffler was located at the muzzle end and was also shifted to the left.

The metal parts of the machine were complemented by wooden fittings. Provided for the use of fore-end under the front of the receiver, solid pistol grip and stock. There are two known accessories for the ZB-530. In the first case, the forend was made in the form of a flat part, and the butt had a Y-shape. The second version was distinguished by increased forearm sizes and other contours of the butt.

The development of the ZB-530 machine started in 1952 and took about a year. In November 1953, the experimental products were sent for testing. As part of the field tests, it was possible to remove the characteristics and determine the list of necessary improvements. In addition, it was already possible to make forecasts about the results of the competition for the development of the machine. 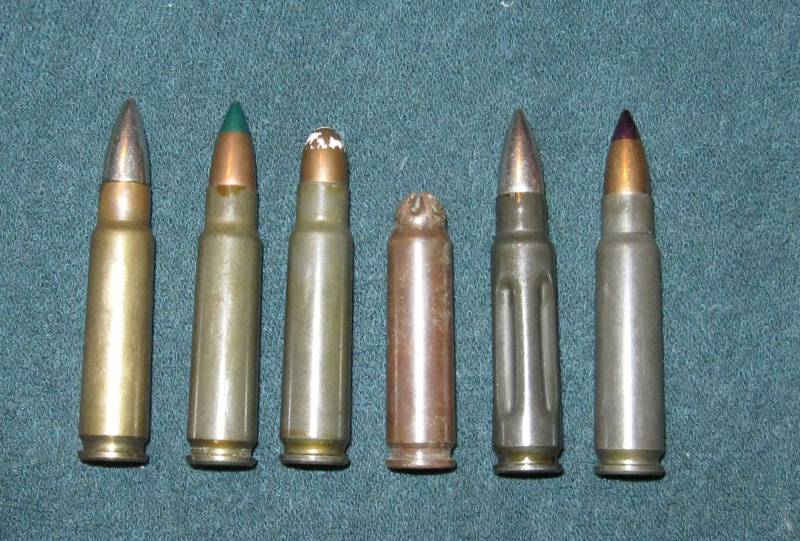 Cartridges 7,62x45 mm vz. 52. Photo Valka.cz
In parallel with the ZB-530, two other automatic rifles under the same cartridge were developed at other Czechoslovak enterprises. In the near future they should be tested and compared, choosing the most successful. However, the program for creating a machine for ammunition vz.52 did not give real results. All three samples, including development of the Zbrojovka Brno plant, did not receive a recommendation for adoption.

Apparently, the ZB-530 assault rifle could have some technical problems associated with the processing of the finished structure to use less powerful ammunition. However, these shortcomings could be eliminated during the refinement. Much more serious difficulties took place in the field of ergonomics. The overhead store was acceptable for a light machine gun, but not for a machine gun.

However, the fate of the new weapon was determined not by characteristics, but by completely different considerations. In the mid-fifties, in Czechoslovakia, a fundamental decision was made to transfer infantry weapons to a unified intermediate cartridge of 7,62x39 mm of Soviet design and to abandon their own 7,62x45 mm. Soon this was enshrined in the rules and regulations of the newly created Warsaw Pact Organization.

At Zbrojovka Brno, they decided not to rebuild the existing machine gun under the new unified cartridge. The result was the closure of the project. As a result, the development of the Czechoslovak small arms went a different way. A few years after the abandonment of the ZB-530, the vz.58 assault rifle entered service. It was not based on the existing structure, and it did not differ in its unusual appearance. However, such weapons showed the required characteristics and suit the army.

The basis of the ZB-530 project was the idea of ​​redesigning the design of the ZB vz.26 machine gun for a new intermediate cartridge with the simultaneous production of rifle ergonomics. We managed to solve technical problems of this kind, but this weapon did not reach the army due to inappropriate ammunition. Nevertheless, another sample of that time solved the tasks posed, including on the transition to a new cartridge.

In 1952, the Czechoslovakia received the machine gun ZB vz.52, also created by V. Holek and his colleagues. Initially, he used a cartridge of 7,62x45 mm, but then a modernization was carried out with the restructuring of the structure under the Soviet 7,62x39 mm. The ZB-530 assault rifle did not begin to be redone in this way, which was the decisive factor that determined its fate.

We are in Yandex Zen
SVT. Career rifle
Victory weapons. "Degtyar Infantry" - machine gun DP 85 years
23 comments
Information
Dear reader, to leave comments on the publication, you must to register.