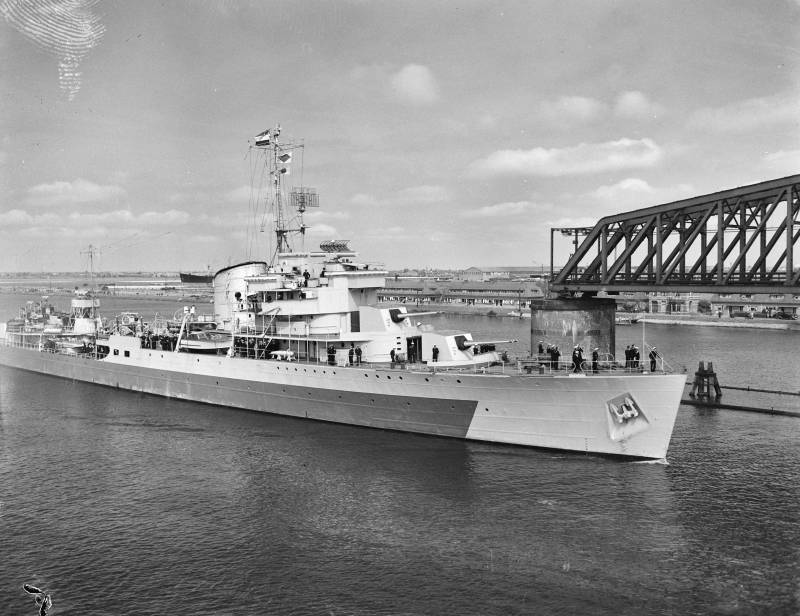 The Netherlands never abandoned the military fleet and continue to "keep the bar" at a fairly high level.


They did not have gigantic defense budgets, and their main projects were ships of the 2nd rank. However unexpected for everyone their modest frigates surpassed in combat capabilities cruisers and destroyers leading maritime powers.

Ships have always been built in small series of 2–4 units, but their practical value is enormous. Both for the Netherlands themselves and their allies, as well as for the entire military shipbuilding industry as a whole. Dutch projects demonstrate benchmark performance for marine weapons.

Efficiency has a name: HNLMS Tromp.

“Tromp” (not Trump!) - in memory of the dynasty of the Dutch admirals of the XVII century. The last three generations of ships bearing this name have turned out to be extremely sensible designs.

The threat of the capture of the Dutch East Indies (Indonesia) became a determining factor in the development of the Netherlands Navy in the 1930s. In the upcoming confrontation with Japan, special hopes were pinned on joint actions with the British fleet (subsequently ABDA, American-British-Dutch-Australian Command).

The Dutch understood well that they were a weak link. Their first battlecruiser (the development of the German Scharnhorst) could enter service not earlier than 1944. The base of the fleet was light forces.

In this situation, the command considered it reasonable to assume some of the responsibilities to neutralize the Japanese destroyers. All possible assistance for the allies, within the limits of available opportunities.

Thus was born the project "Argonaut 600", which became a warship of the type "Tromp". 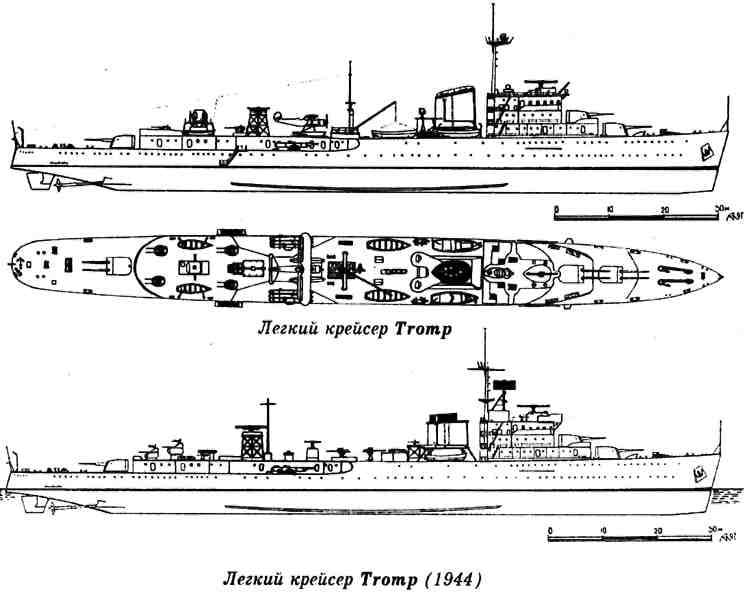 It does not lend itself to precise classification. Too large and not fast enough for a destroyer leader. But still too small to fit the standards for a WWII era cruiser.

The author of a detailed Russian-language article about Tromp ironically called it the Pygmy Cruiser Class. Most sources still consider the Tromp light cruiser and give him optimistic estimates. “Run into” such an adversary in the labyrinth of the Sunda Islands did not bode well for the combination of Japanese destroyers.

With a total displacement of 4800 tons - only 15% more than the leader of Tashkent.

Of course, the leaders were different. For objectivity, it is worth noting that Tashkent was the largest, simply outstanding representative of its class. Most leaders and large destroyers of that time were 1,5-2 times behind the displacement from Tashkent.

The Dutch ship turned out even more. But the cruisers are also not mature enough.

Nevertheless, the size of the "Tromp" has already allowed to realize many of the advantages of such a severe caliber. Fully enclosed 70-ton towers of the Civil Code with 60 ° elevation angles, two of which are in the nose, according to a linearly elevated pattern. A full rangefinder post with a base of 6 meters. And an extended forecastle, providing a freeboard height of 6 to 7 meters at half the length of the hull. The Tromp board was taller than the Iowa battleship!

When viewed from the side, the “pygmy” seemed much larger than it actually was.

In this sense, the Tromp resembled modern ships, which, with relatively small displacement values, have sides of outstanding height. 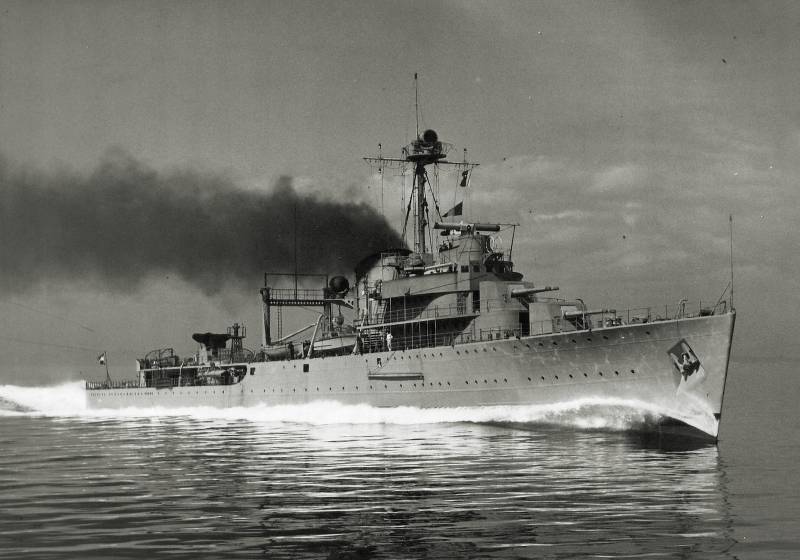 In this image, the dimensions of the light cruiser are felt (in comparison with the figure of a sailor)
Due to the general “lightness” of its structures (which is an affinity for destroyers), the 4800-ton “Trompu” was guaranteed a high side. But the cruiser did not receive developed add-ons due to the presence of 450 tons of armor. Those reserves of mass that modern ships of similar sizes spend on skyscraper add-ons, the light cruiser "went" inside the hull.

Evaluations of his reservation begin with a “belt” - a covering that had a thickness of 2 mm over 3/16 of the hull. In fact, some destroyers, for example, the American Fletcher, could boast of similar bullet-proof armor (from fragments and bullets of machine guns). Sheathing and decking “Fletcher” reached a thickness of 0,5 inches (12,7 mm). Even at the Soviet "sevens", often criticized for the fragility of the hulls, the thickness of the shirrek was 10 mm. (Shirstrek - a strip of casing, in the upper part of the side, where stresses from bending loads reach the highest values.)

But the creators of Tromp went even further.

The real carapace was hidden inside from prying eyes. The “external” compartments located along the side were separated from the “internal” compartments with important mechanisms of a longitudinal bulkhead with a thickness of 20-30 mm, which also played the role of a PTZ bulkhead. And in the same way - from the opposite side. From above, both bulkheads were connected by a deck of Krupp armor 25 mm thick.

In order to enhance the protection of the underwater part, the ship had a double bottom for 57% of its length.

Of course, the designers paid attention to the protection of weapons - GK towers and barbets received walls with a thickness of 15 to 25 mm.

Of course, such a spaced reservation could not protect the Dutch cruiser even from 5 '' shells. But this did not mean that 450 tons were wasted. The calculation of the designers was based on the localization of damage and providing protection against fragments.

No one from the ships closest in size and purpose (counter-carriers of French and Italian construction) had no constructive defense at all. And the concepts of "citadel", "traverse", "horizontal defense", PTZ were found only in ships of a class no lower than the cruiser.

Best ship of rank 2-3? In my opinion, Tromp deserves a more careful assessment. No matter how powerful his artillery was, in the battle in Badang Bay, the cruiser was unable to sink any of the opponents (destroyers Asashio and Oyashio), receiving 11 hits in response. However, one episode is not an indicator. In 1942, the Allies suffered heavy losses, regardless of the quality of ships and weapons.

Or the aforementioned seaplane - not a single image of the Tromp with an airplane on board was found. Most likely, the cruiser carried aviation weapons only in theory.

It is clear that such “pygmies” could not be of interest to the fleets of the leading sea powers.

To understand why Tromp is a successful project, you need to look at the situation differently.

The Dutch found a way with a lack of funds and technology to strengthen the fleet with something more serious than the destroyer leader. And this practice could be useful for the Navy of many states. Unfortunately, the command of the weak fleets often suffered from an inferiority complex. They were important external brilliance and extreme speed - as proof of their high value.

The Tromp of 1937 is perhaps not the most convincing example of Dutch craftsmanship. In his era, too much depended on the size of the ship itself. But the advent of microelectronics and guided missile weapons completely "untied" the hands of the Dutch designers.

A series of two ships built as the flagships of the Netherlands Navy. Wait a laugh!

At a total displacement of 4300 tons, Dutch the frigate carried half the weapons of the California nuclear-powered cruiser. And something else ...

Comparison with the atomic cruiser is not accidental. Indeed, the comparison of “Tromp” with “classmates” from the 1970s will look awkward.

A frigate like Oliver Perry (4200 tons) will immediately lose on all counts. He has the same “one-armed” Mk.13 launcher with 40 missile ammunition ... but how many fire control channels? Only one. And what is a surveillance radar? I am ashamed to speak.

Under the huge white cap of the Tromp hid the powerful three-axis radar SPS-01, which was originally created to work as part of the British Sea Dart air defense system.

In addition, Tromp was equipped with an additional short-range air defense system. Protection at the nasal corners was provided by the container Sea Sperrow.

Paradoxical as it may seem, only the California cruiser can be considered as the closest possible analogue of the Tromp in the 1970s. Where the Tartar / Standard air defense system was also used as the main weapon. 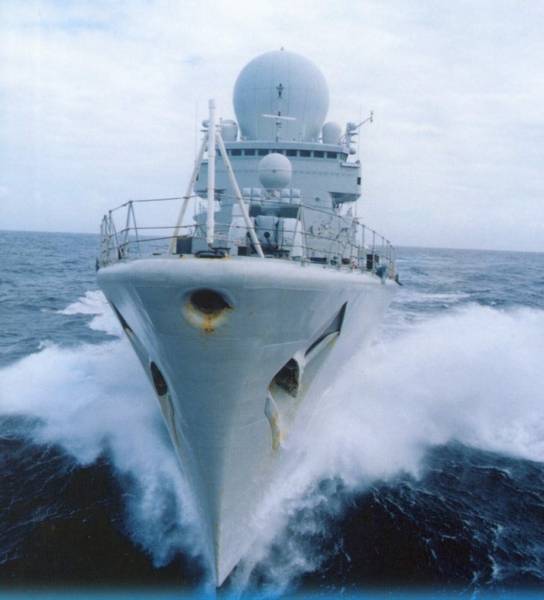 At the same time, the small “Dutchman” turned out to be “toothy” enough to look worthy against the background of such a high-ranking rival. And even excel in something! For example, California did not have a helicopter hangar.

The most unpretentious, but the most efficient NATO ship in European waters

Perhaps the Dutch knew the magic word. If we evaluate the situation logically, then the disproportionate possibilities of the “Tromp” have their own explanation.

The US Navy is used to looking at any ships, even cruisers and destroyers, in the context of mass production. Mass product, commodity, consumable.

As part of the compact European fleets, each ship was on a special account and had an exclusive status. And the attitude towards him was appropriate. 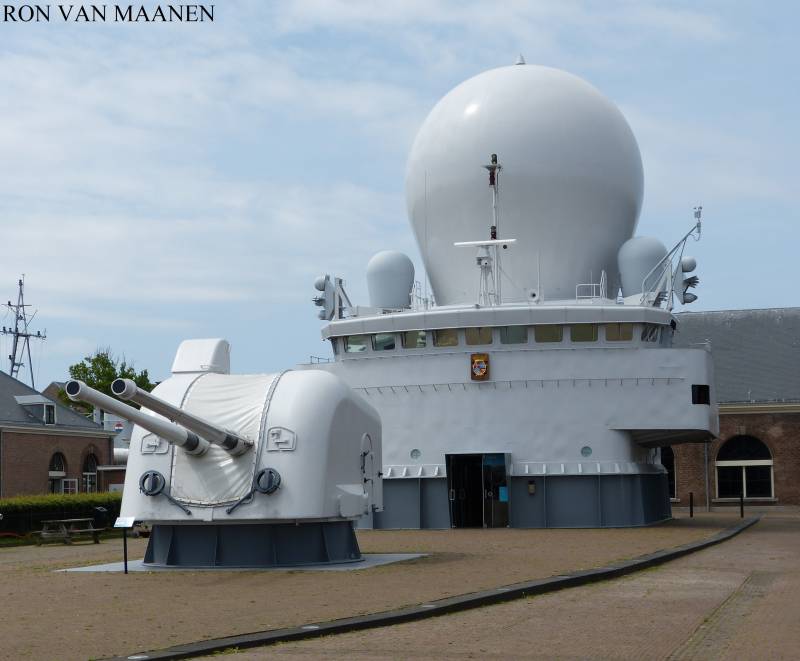 The Netherlands, as one of the most developed and wealthy members of NATO, could afford more than the rest. They independently created or purchased the best weapons, turning their ships of the 2nd rank into real "death stars". 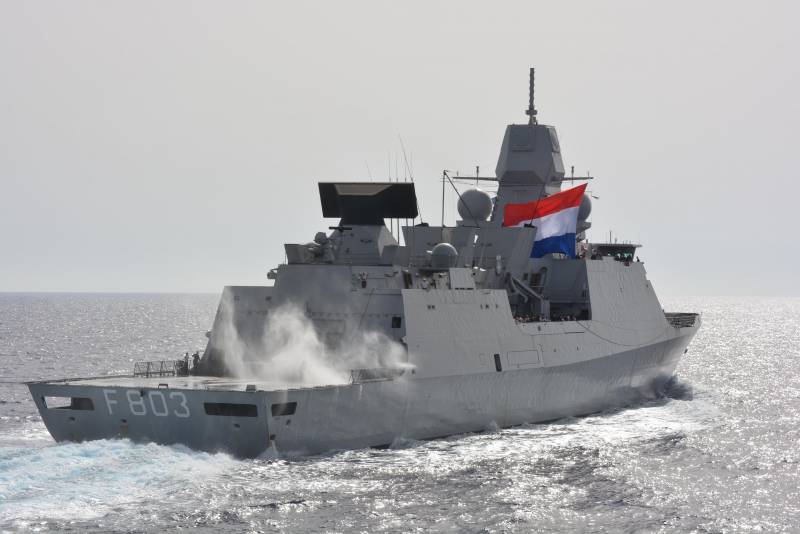 The same flag colors, but different order of stripes. Where are our frigates of this level?
Radars with active antennas of any selected ranges and dozens of launchers with missiles, without deployment delays. The weapon of the ship is in immediate readiness! Against the background of a flat sea surface, from the horizon to the horizon, where aviation and air attack equipment have nowhere to hide behind the folds of the terrain.

The Dutch have made the most of these opportunities. There are only four types of ships in the world that can compare with the Dutch frigate in terms of air defense / missile defense potential.

The current Tromp is a representative of the Seven Provinces team frigate series. Command - because it is the first to see an air target and provide target designation to other ships, distributing their actions in repelling an attack.

In addition, unlike its predecessors, it is very beautiful.

A detailed article about these frigates: "Flying Dutchman" setting the standard for the destroyer "Leader".

It is already too late to compete with the current Tromp; next year he will be 20 years old. On the way - a new generation of frigates (destroyers) for the Netherlands Navy. It is necessary to look and draw conclusions.

The magic word "Tromp" helps to find the right and effective solutions among countless projects in the field of military shipbuilding. 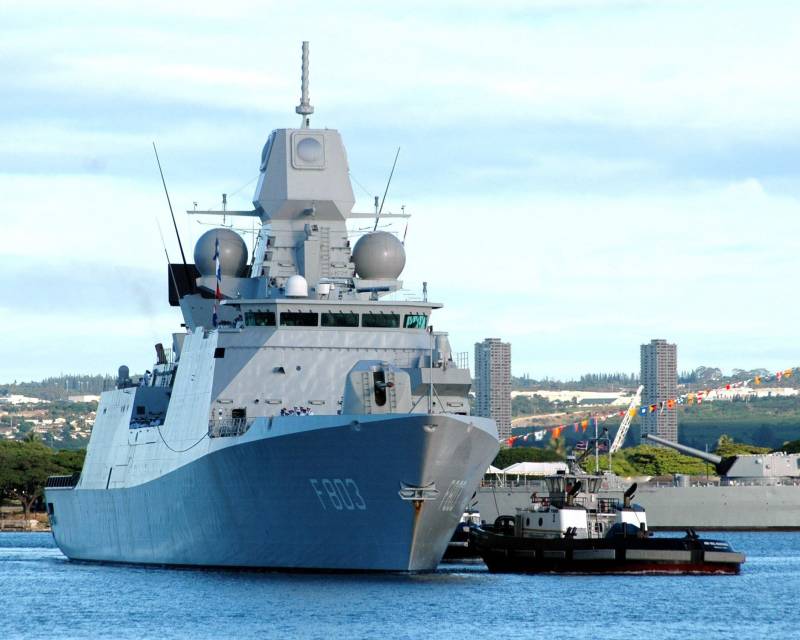 We are in Yandex Zen
Project 68-bis cruisers: the Sverdlovs' tasks in the post-war fleet of the USSR. Part of 3
"Svetlana". History of creation
36 comments
Information
Dear reader, to leave comments on the publication, you must to register.