Long-range "Krasnopol-D" in artillery duels with Western self-propelled guns. Should you expect triumph 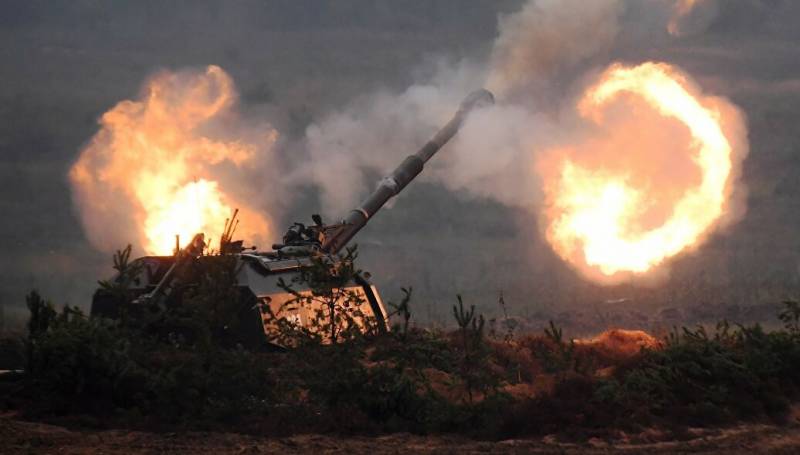 Based on operational reports of military operations on the Syrian theater of operations, regularly published in the news sections of numerous domestic military analytical portals with reference to competent sources in the command of the Russian group of forces in the SAR, the defense department of the Syrian Arab Republic, as well as military commanders acting side by side with the fighters Al-Quds, an elite division of the Islamic Revolutionary Guards Corps, we are once again convinced that equipping modern towed howitzers and self-propelled guns High-precision corrected OFS is the most significant help to friendly artillery units in intensive counter-battery duels at distances of more than 7-10 km.

In particular, according to the eminent Russian publications defense.ru and Zvezda TV, referring to informed sources in the command of the Russian Armed Forces in the SAR, from August 2016 Russian and Syrian artillery units that have 2S3 Akatsiya and 2S19M Msta-S self-propelled guns as well as 2A65 Msta-B towed howitzers, the Krasnopol-M2 corrected / guided shells were repeatedly used to suppress the firing positions and strongholds of the pro-Turkish militant Islamist formation Khayyat Tahrir al-Sham in response to shelling of the Khm airbase We use unguided rockets of MLRS BM-21 "Grad" and raids of "drones-kamikaze" artisanal production.

As shown by the video materials with the captured moments of striking at enemy targets, captured by the Orlan-10 UAV turret optoelectronic systems, the effectiveness of the brainchild of the Tula Instrument Design Design Bureau named after Academician A. G. Shipunov was 100%, which was due to the high accuracy of the semi-active laser homing head of the UAS "Krasnopol-M2", as well as the timely illumination from the laser rangefinder-target designators located on the "Orlan-10" itself.

A logical question arises: are the above artillery equipment equipped with the Krasnopol-M2 UAS capable of ensuring parity in hypothetical counter-battery "duels" with modern American self-propelled guns M109A5 / 6 PIM and M109A7, as well as field-towed howitzers M777 , armed with artillery units of the US Marine Corps?

Of course not. The essence of the problem lies in the fact that the ballistic qualities of the standard 152 mm rifled guns 2A33 and 2A79 of the Akatsiya and Msta-S self-propelled artillery systems, as well as the 2A65 Msta-B similar towed howitzer gun, provide firing range with guided projectiles "Krasnopol-M2" at a distance of no more than 20-26 km.

The lack of a GPS correction channel in the ANN architecture of the Krasnopol-M2 guided artillery shell ruled out the possibility of its use at a distance of more than 26 km, which forced the Tula KBP specialists to begin developing a promising version of this product

The relatively low flight range of Krasnopol-M2 is also due, firstly, to the presence of a “short-lived” bottom gas generator (accelerating engine) with a small mass of solid fuel charge; secondly, the absence of a GLONASS trajectory correction module integrated into the radio-electronic architecture of the inertial navigation system (INS) of the projectile and providing the implementation of more accurate and optimal flight paths for a more accurate exit to the battlefield area (activation area of ​​the semi-active laser homing head) at distances more than 30-35 km.

At the same time, the American UAS M982 Block IA-2 Excalibur equipped with GPS correction modules provides the M777A2 and M109A5 / 6 PIM / 7 self-propelled guns of the Paladin family with a range of about 55 km. As a result of this, over the past few years, Russian gunners have been in dire need of developing a more advanced and long-range modification of Krasnopol-M2, which has an additional satellite-based radio correction channel.

Tula Instrument Design Bureau Academician A. G. Shipunov reacted immediately. In an extremely short time, the latest modification of the guided artillery shell, Krasnopol-D, was developed. The product was equipped with the long-awaited GPS correction receiver, as well as a more high-performance digital computer that provides more efficient control of the inertial navigation system (ANN), because algorithms with additional “long-range” flight paths were loaded on its drive. As a result, when using MSTA-S self-propelled guns from standard 2A79 guns, the range of the Krasnopol-D shells increased by 65,4%, reaching 43 km. The indicator is quite decent. Nevertheless, the 55 km bar, implemented by the latest versions of the 155 mm American UAS M982 Excalibur, was never overcome.

An excellent help in eliminating this gap will be the beginning of large-scale production and delivery of advanced self-propelled artillery systems 2S35 "Coalition-SV" to the combat units of the missile forces and artillery of the Russian Federation. These self-propelled guns boast the presence of more advanced 152-mm 2A88 guns (52 caliber long) with significantly higher maximum crash pressure in the bore. Considering the fact that during the field tests the 2A88 gun provided the firing range with the latest active rockets of the order of 60–70 km, the estimated range of the UAE Krasnopol-D can be 55-60 km, which will temporarily allow for stable artillery parity duels with 155 mm NATO tools adapted for the use of Excaliburs.

Meanwhile, it’s still too early for Russian gunsmiths to relax, because overseas at various stages of implementation there are projects of a long-range long-range self-propelled gun from BAE Systems M1299 (a long-range version of the Paladin with an L58 gun), a promising 155-mm HVP projectile (Hyper Velocity Projectile ”), Which has an aerodynamic configuration“ bearing cone ”with minimal ballistic braking and a flight range of up to 100-120 km. Only the ambitious program of the scientific and production association “Fusion” is capable of opposing these projects, which consists in designing and preparing for serial advanced 152-mm and 203-mm artillery shells with “pulling” integrated rocket-direct-flow engines in the warhead.

The estimated range of these guided artillery shells (over 100 km) can be compared with the parameters of the concept of the promising air-reactive UAS “155-mm Solid Fuel RamJet”, the beginning of the development of which was announced by the headquarters of the Norwegian company “Nammo” several years earlier. Unfortunately, the specialists at Fusion in this field are even more dubious than their Norwegian colleagues.

We are in Yandex Zen
Brigade "Al-Quds" - the main goals of the Israeli Air Force in Syria
Guarding the Islamic Revolution: the IRGC and its role in the life of Iran
89 comments
Information
Dear reader, to leave comments on the publication, you must to register.