Miass masters: the last of the Ural carburetor dynasty 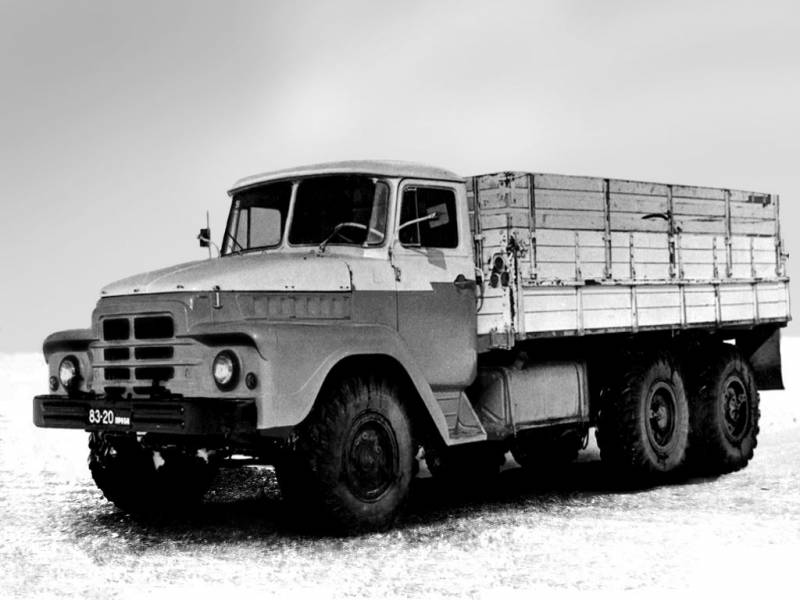 One of the variations of the "Ural-377M"

How to turn a combat "Ural" into a civilian vehicle? First of all, you need to get rid of many military options that significantly aggravate the truck. Nevertheless, in the national economy, the main thing is not survivability on the battlefield and extreme cross-country ability, but loading capacity, ease of operation and economic efficiency. Trucks, for example, of the ZIL-131 family did not have special problems with such adaptation, they were initially unified with the national economic machines of the 130th family. But the Urals of the 300th series could not boast of such versatility.

The first attempt to create a truck for peaceful life took place in 1961, when the Ural-377, minimally adapted for civilians, went to the test. First of all, the front drive axle was removed (replaced by an axle from the MAZ-500), the transfer case was replaced with a demultiplier, a new cargo platform with three tilting sides was installed, and the centralized pumping system for wheels was excluded. Interestingly, the Ural-377, the first among the machines of the family, received an all-metal cab, which was subsequently installed on the Ural-375D military family (these trucks were discussed in previous part). The obvious drawback of the civilian version was the excessively large loading height of the platform due to the massive 14.00-20 wheels and a spare wheel located under the body. The cargo had to be thrown to a height of 1,6 meters - even KrAZ at that time was more comfortable in this regard. 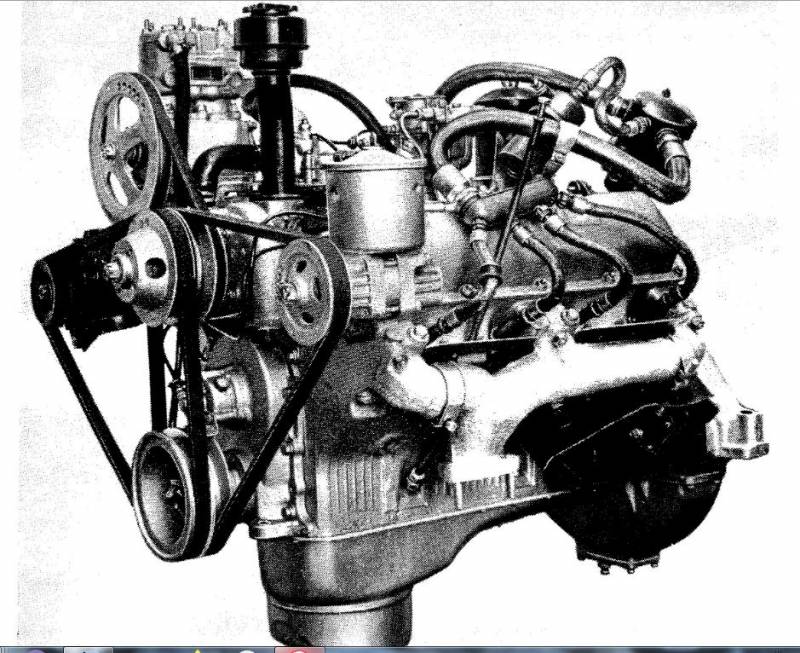 ZIL-375, the first motor of the Ural family
The load capacity, after all the simplifications, of course, was able to increase to 7,5 tons (in the military version it was 4,5 tons), but the body was a bit short for such a machine. Long meters loaded on the Ural-377 seriously redistributed the load: the rear bogie was overloaded, and the front axle, on the contrary, lost contact with the ground. Here, the facilitation of the front end by removing the heavy drive axle played a negative role, and the bonnet layout itself did not contribute to the rational weighting of the loaded car. Despite these points, in 1965, after four years of refinement, the Ural national economy got onto the assembly line in Miass. 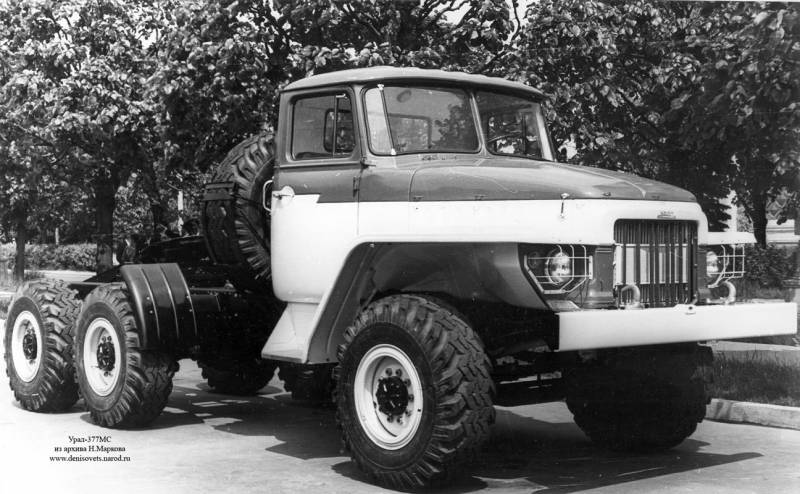 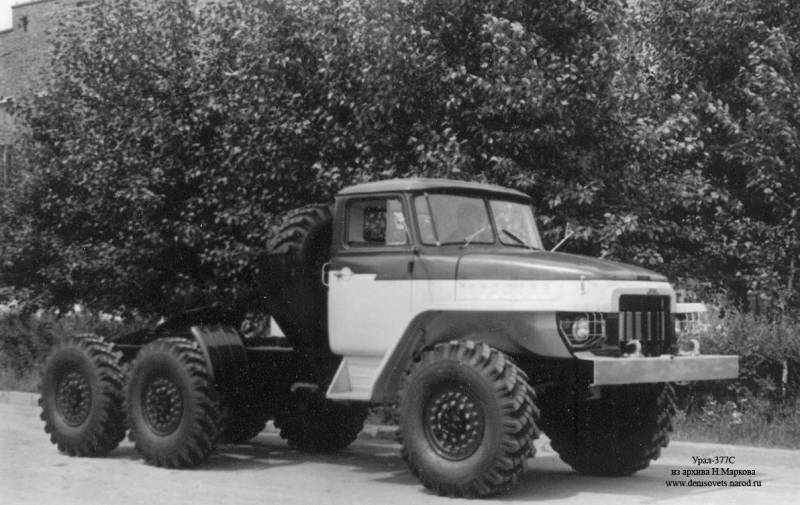 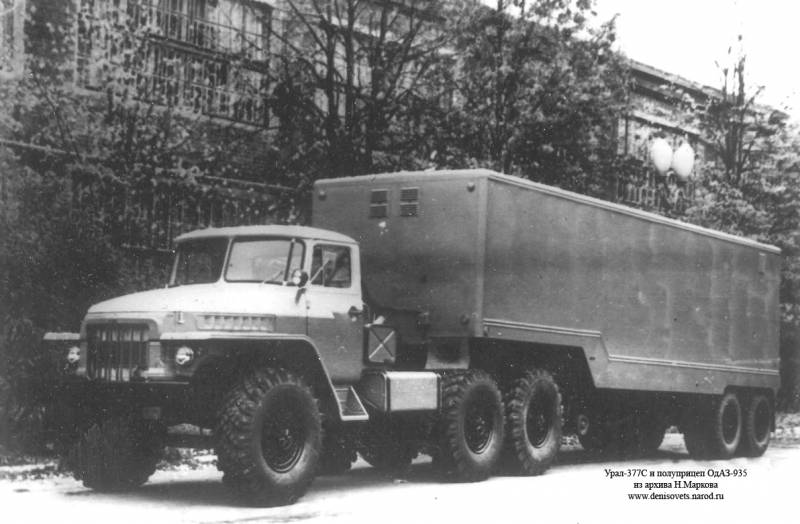 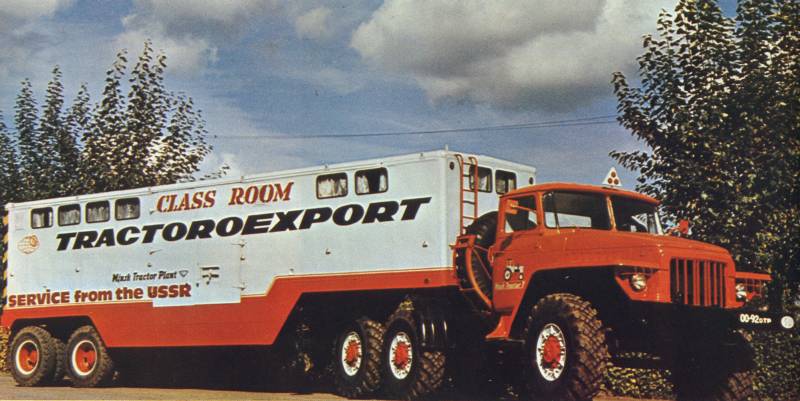 Tractor Units Based on the Peaceful Ural-377
But the army roots of the peaceful "Ural-377" haunted. He was also adopted by the Soviet Army. A truck capable of towing a trailer weighing 10,5 tons, and in the version of the 377C / CH truck tractor to haul a semi-trailer up to 19 tons, was very useful in the rear parts. In particular, on the basis of Ural 6x4 a 9T254 transport vehicle was built as part of the Grad MLRS with special racks and ammunition boxes. And truck tractors came in handy for moving army ODAZ-828 semi-trailers, on which flight control points were mounted aviation “Application”, control of anti-aircraft missile brigades “Vector-2B” and “Senezh”, systems for processing data from radars “Pori-M”, as well as automation systems for command post “Osnova-1”.

In the interests of the national economy

“Ural-377” in 1966 evolved into a more advanced model with the letter “M”. Given the difficulties with a short loading platform, it was decided to lengthen the truck by 420 mm, and the platform height was reduced to 1,42 meters due to new wheels from Omsk tire manufacturers. The wheel diameter decreased immediately by 80 mm, the mass decreased, and the width increased, increasing the spot of contact with the surface. There was an interesting experiment with tubeless tires, which, as it seemed to the engineers, did not require a spare wheel at all. There was a struggle for kilograms of truck mass - they abandoned the massive spare wheel that raises the height of the body, and replaced it with a rear axle wheel inflation system. But what if the puncture of the tubeless tire is on the front axle? 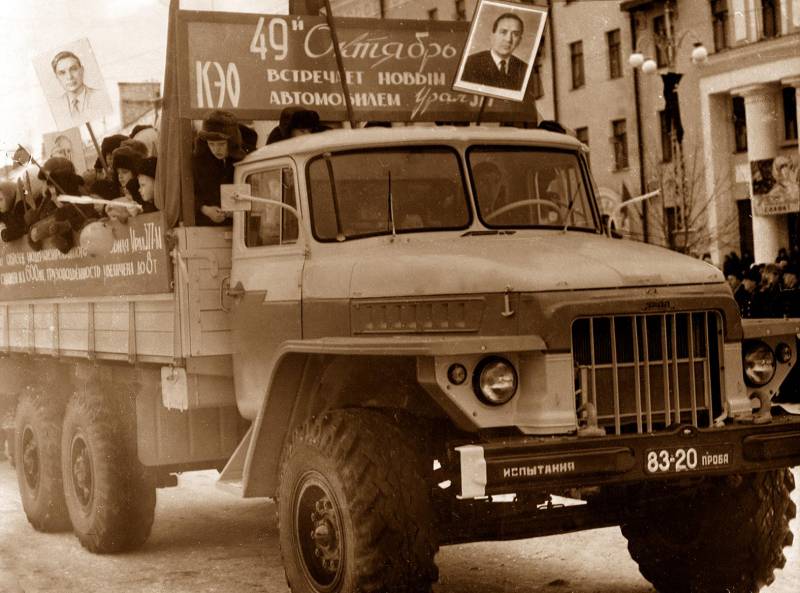 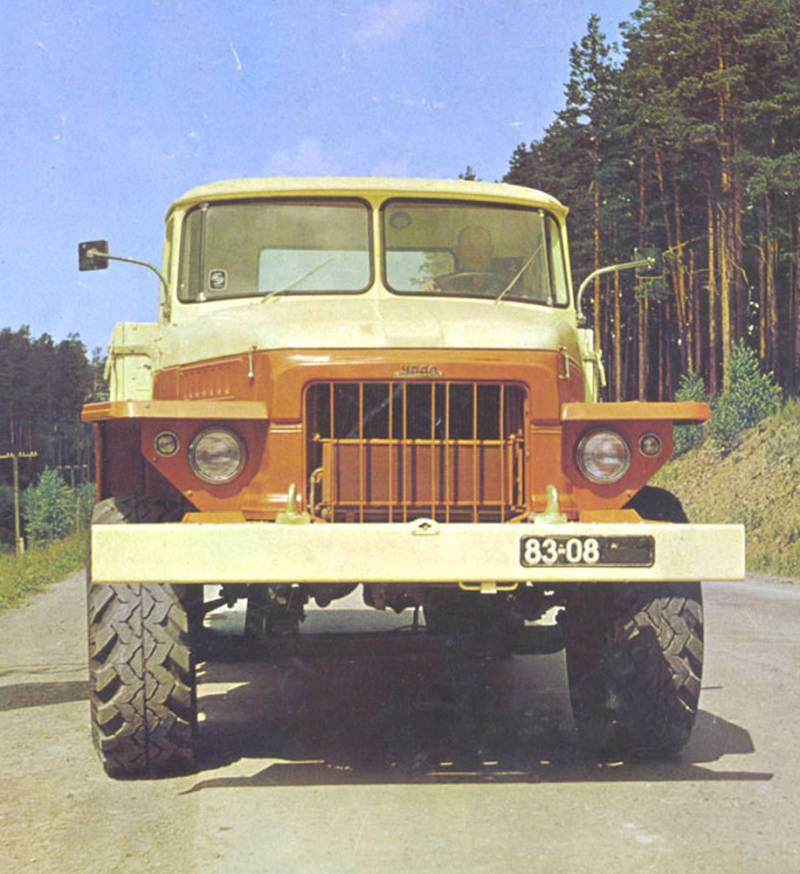 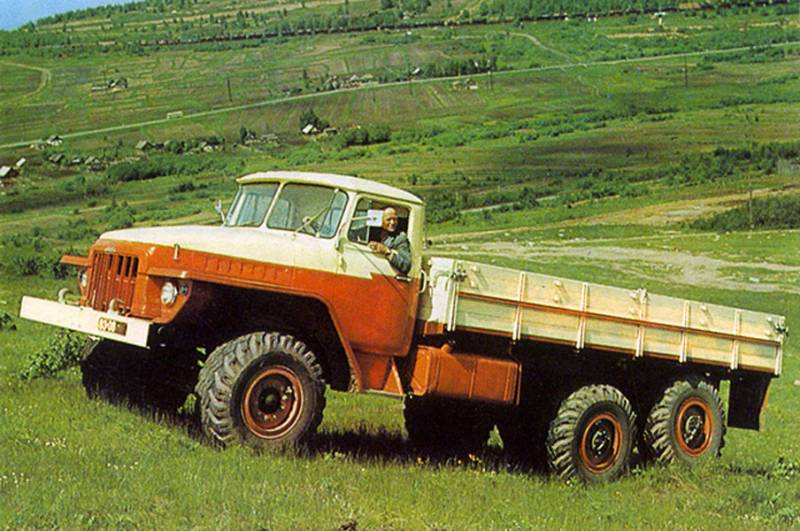 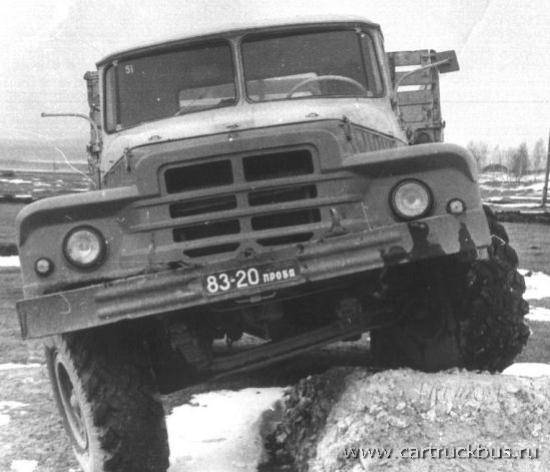 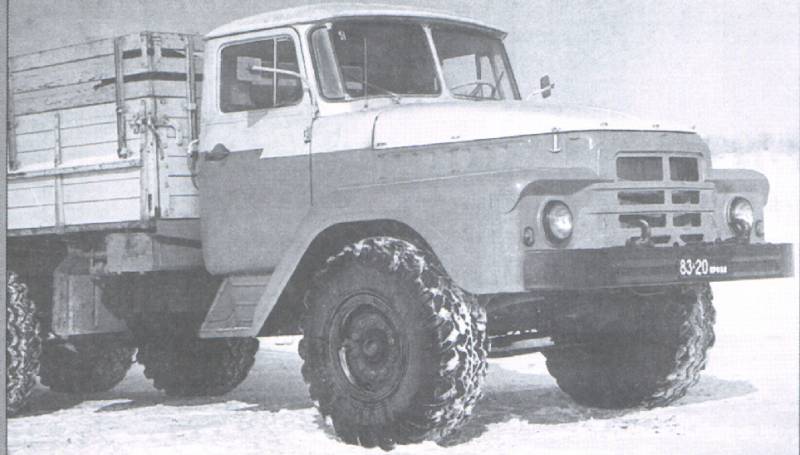 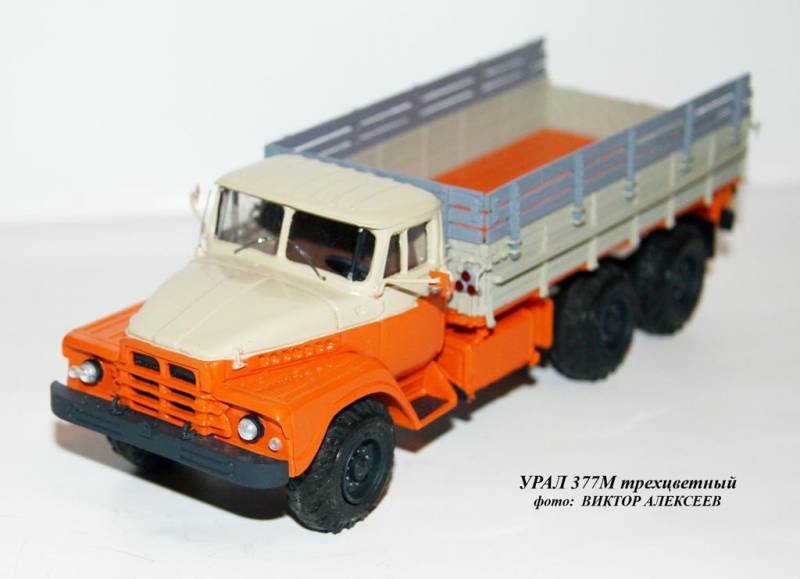 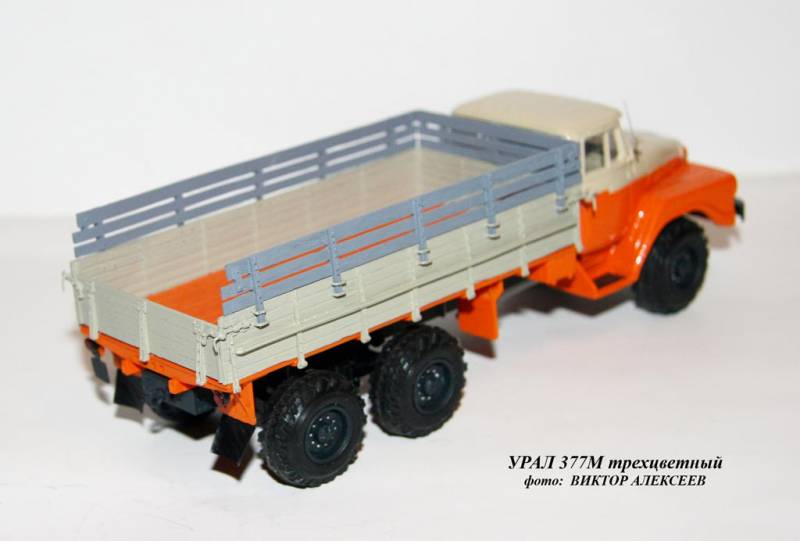 Dull version of the "Ural-377M"
It's simple - swap the defective wheel and the whole rear, turn on the swap and continue driving to the nearest tire shop. It is good that such an idea did not take root due to the weakness of the tire itself - in Omsk, due to mass saving, it was made unreliable. In addition, the designers of Ural conjured over the gear ratios of the demultiplier, a direct transmission appeared, the maximum speed increased to 88 km / h, but the consumption of 93rd gasoline still did not fit into any framework - 73 liters per hundred. To increase the carrying capacity, we developed a variant of the machine with a gable tire for the rear bogie on road wheels 260-508, and they tried to solve the problem of excessive fuel consumption of the ZIL-375Я4 engine by installing the promising own Ural-376 diesel engine. 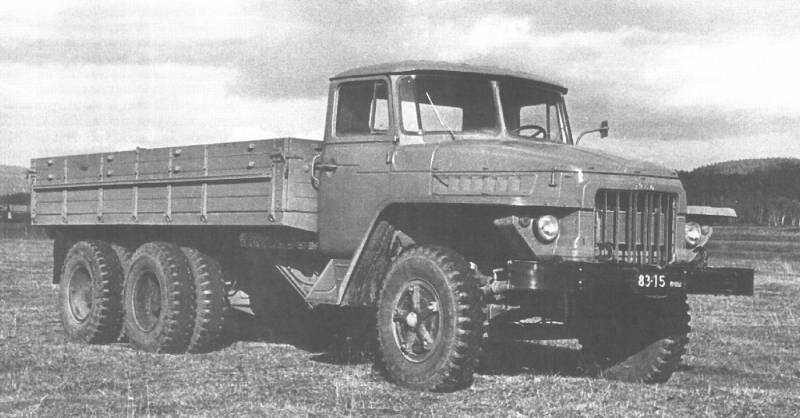 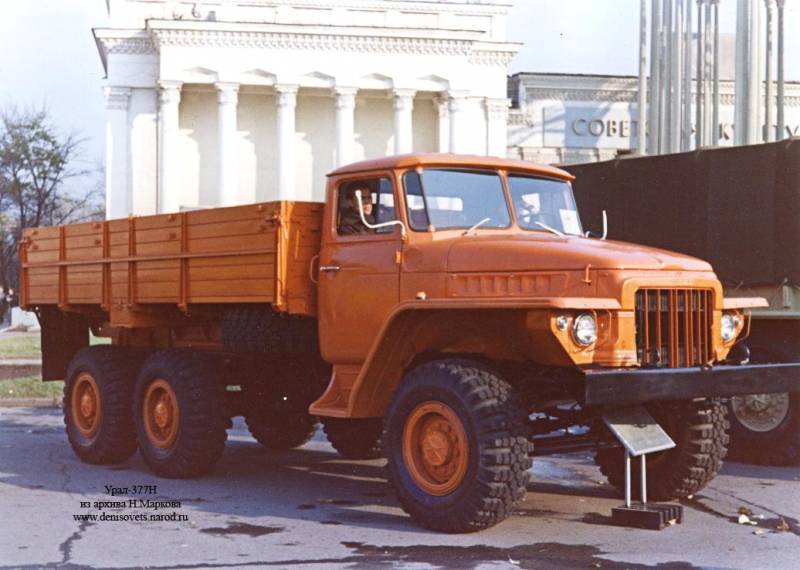 The latest and most advanced version of the machine with a 6x4 formula is the Ural-377N. Pay attention to the new wheels with universal tread
The brutal appearance of the army "Ural", which fit to be recorded in the Museum of Automobile Glory, at the end of the 60s tried to "fix" a new fiberglass cabin, which, however, could not withstand the operating conditions and mercilessly cracked. In particular, on bumps the wheel could simply split a fragile wing. Actually, it’s good - the cabin was too ugly. After unsuccessful experiments with delicate Omsk tires, a new wide-profile O-47A was installed with a universal tread pattern that showed an almost threefold increase in resource. As a result, after long trials and research, by 1969 a civilian truck was created in Miass that largely satisfies the needs of the national economy. But it all ended and never started: it was decided to build a huge plant in Naberezhnye Chelny, and in Moscow at ZIL they were finishing the development of a promising hoodless diesel truck, which we now know as the ancestor of the KamAZ family. As a result, the civilian Ural-377M project was closed, redirecting the efforts of factory workers to army equipment. Incidentally, this became a serious problem already in the 90s, when the volume of military orders decreased, and there were few civilian vehicles in the production range.

At the end of the story about the Ural family, one cannot fail to mention some exclusive cars that either did not go beyond the experimental performances or were produced in a small series. One of these was the four-axle NAMI-058 with an active semi-trailer with a loading capacity of 8 tons. On a twelve-wheeled car, a 4-stroke V-8 YaMZ-238N turbodiesel with a capacity of 320 liters was installed. sec., providing a high specific power of 12,6 hp / t. For comparison: in the active Ural-380S-862 road train with a gasoline engine, this figure was 7,7 hp / t. At the same time, the development of NAMI spent significantly less fuel - on average, one third less than its weak gasoline counterparts of similar carrying capacity. 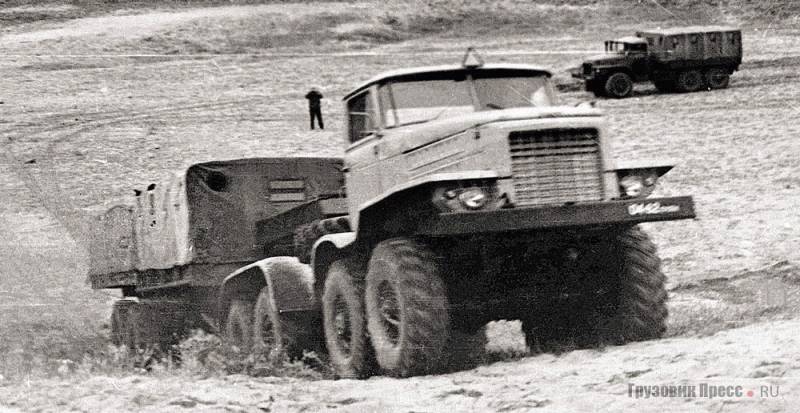 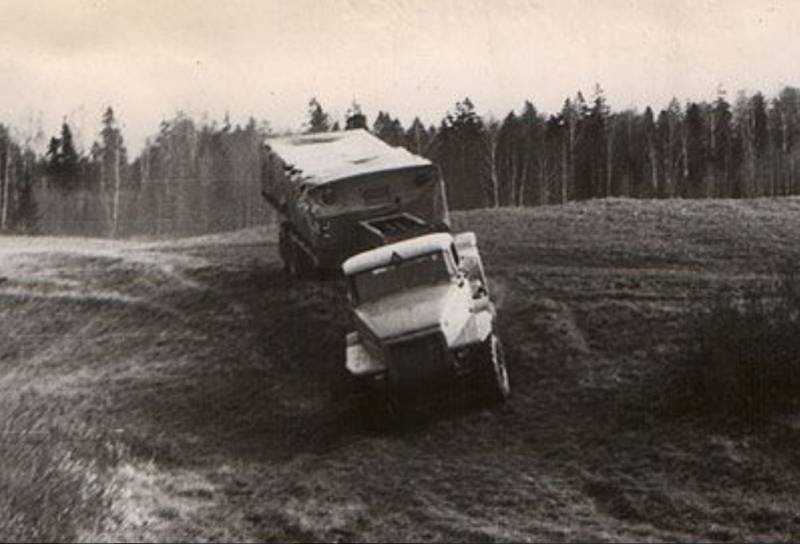 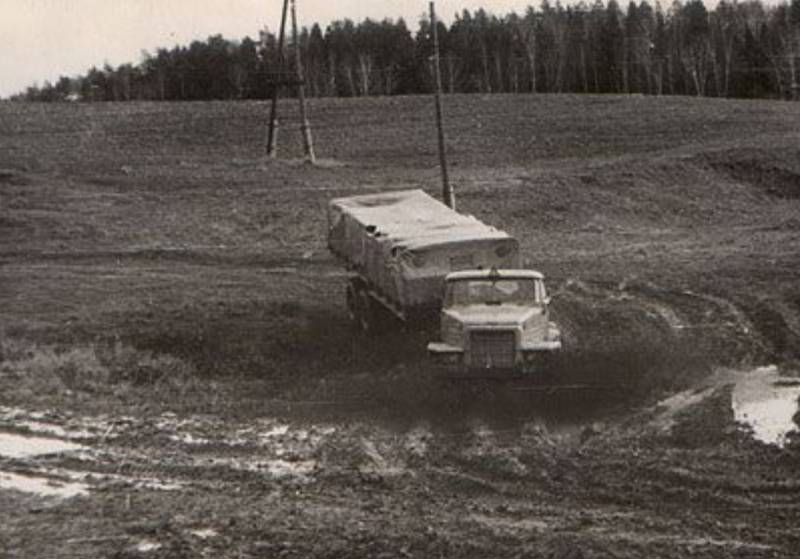 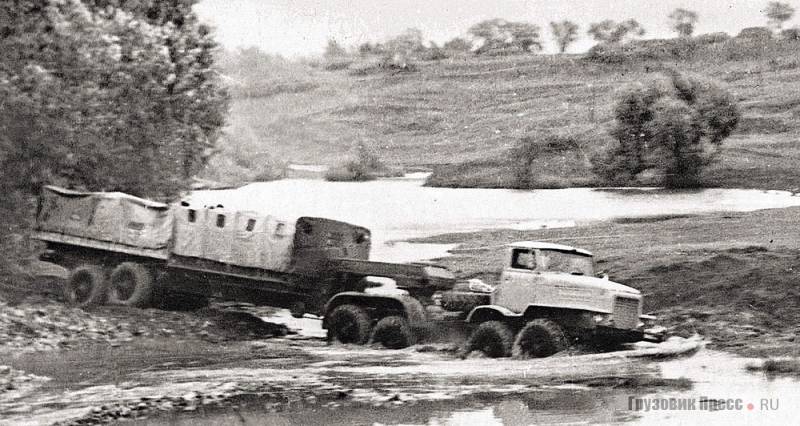 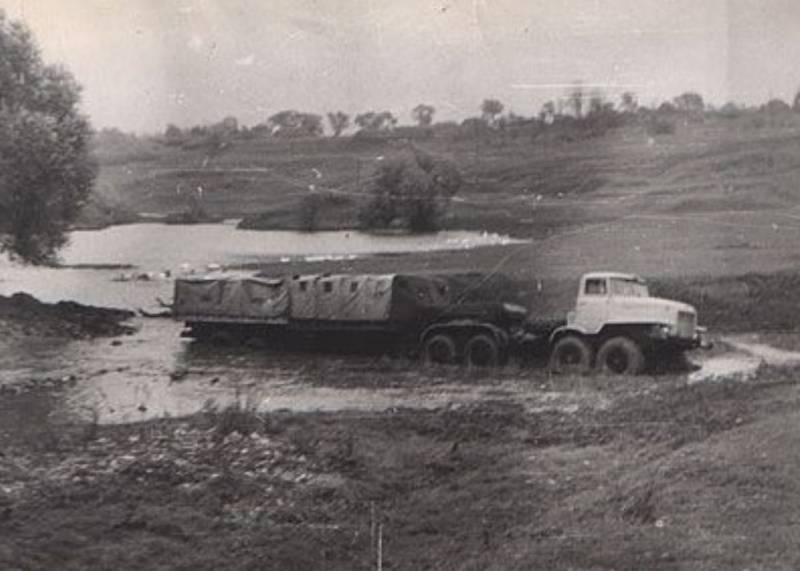 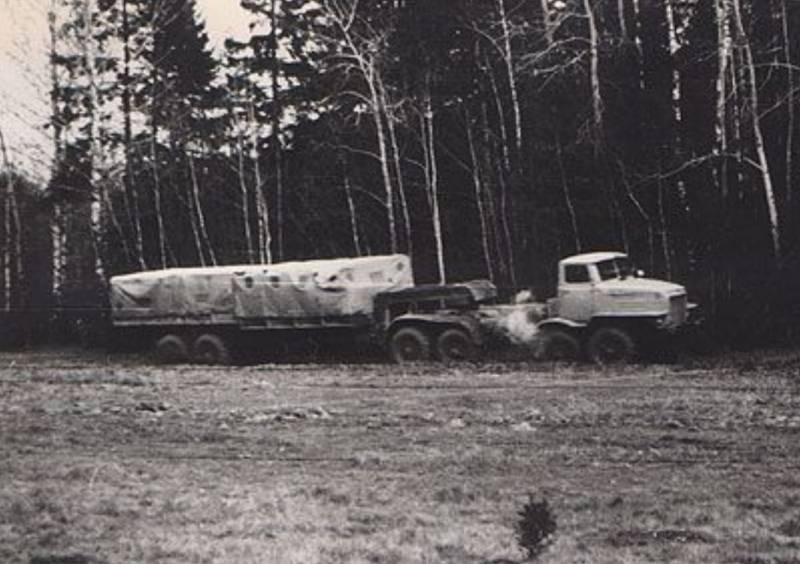 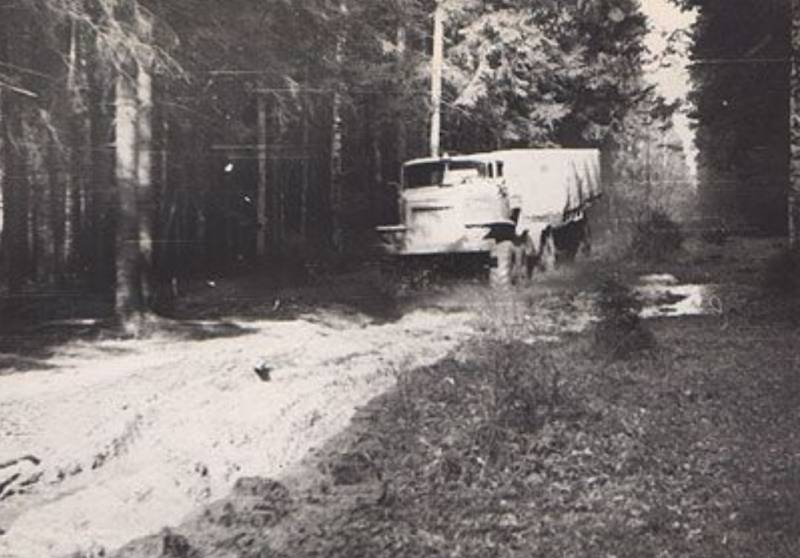 NAMI-058
Open sources provide interesting results of a comparative test run of the NAMI-058C-862 road train with a disconnected drive to the semi-trailer and the usual Ural-375 cross-country terrain. In total, we ran 43 kilometers, and the Ural carburetor found an average consumption of 116 liters of gasoline per 100 km at an average speed of 21,7 km / h. A six-axle and much heavier US cost 105 liters of diesel per 100 km at a relatively close average speed of 22,4 km / h. To justify such an immoderate appetite, it must be said that both cars were loaded, and the roads were with liquid clay and deep ruts. At the same time, due to lower specific pressure on the ground, the road train left behind ruts of smaller depth than the younger Ural, and twelve wheels allowed to take 18-degree lifts (the 375th allowed itself only 11-12 degrees). The results of the tests of the tractor showed the full potential of this direction and, although the car was not planned in a series, the developments of Ural-NAMI became the basis for the next 8x8 generations. 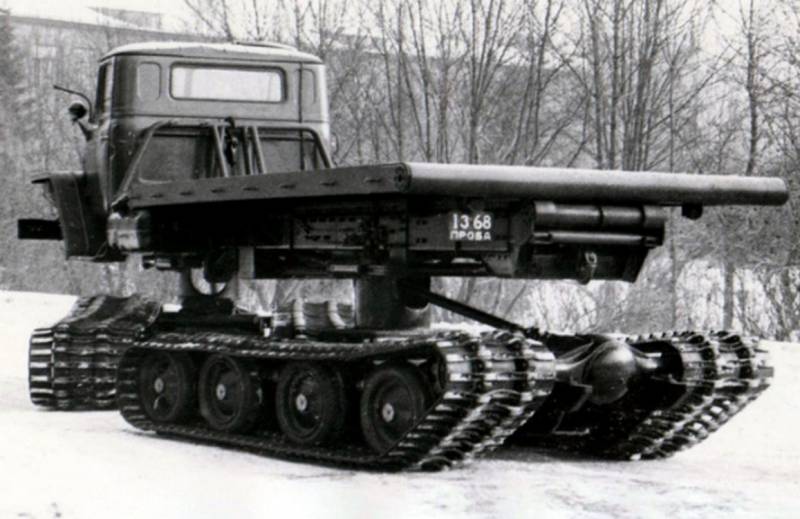 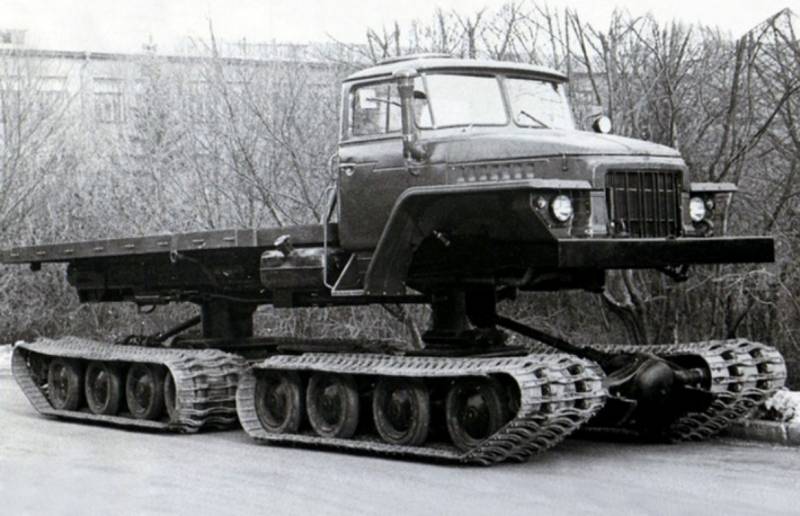 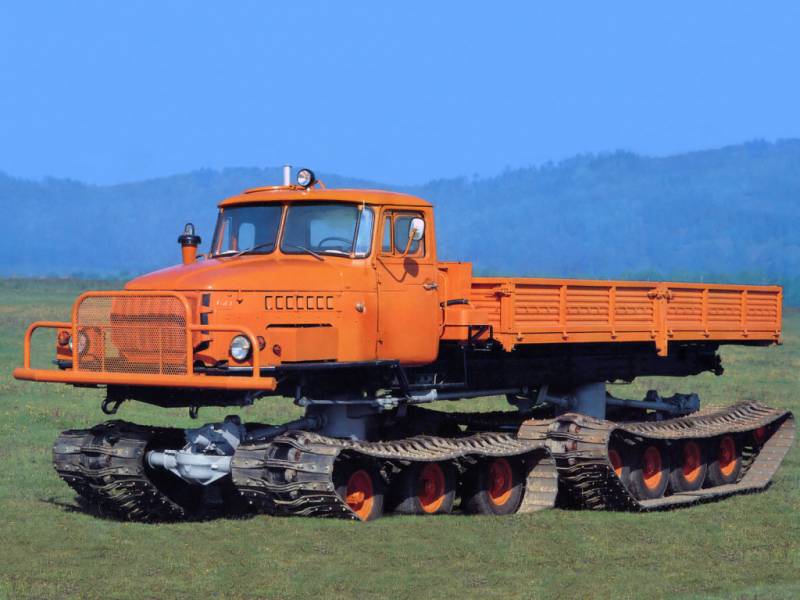 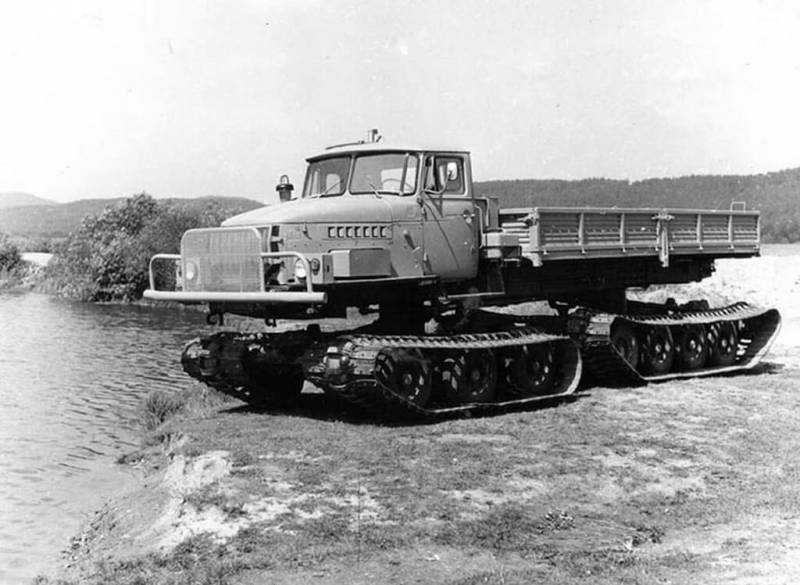 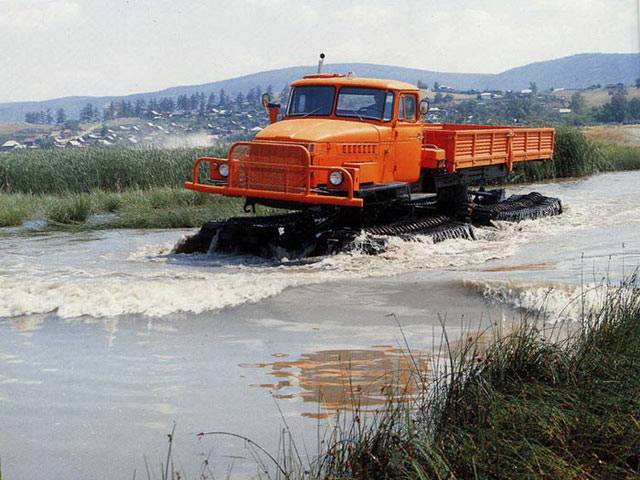 Caterpillar snow and swamp conveyor "Ural-592"
In the 70s, the Ural-592 tracked snow and swamp conveyor appeared at the Ural Automobile Plant, which was the most comprehensive among the entire line of Ural Masters. Of course, he did not know how to swim, but two caterpillar platforms connected to the body by slewing rings provided the car with an outstanding cross-country ability with a maximum load capacity of 8 tons. Actually, the machine was developed by us precisely for workers in the oil and gas industry, where, as you know, there are few roads. The prototype of the production car was NAMI-0157, which was later unified with the aggregate base of gasoline Urals, and by the end of the 70s it was equipped with the famous KamAZ-740 diesel engine. It is noteworthy that the design of the machine made it possible to rotate the tracked platforms independently from each other, significantly increasing the maneuverability of the truck. The first "Ural-592" came out of the gates of the Miass factory in 1981 and were issued before the collapse of the Union. In the 2000s, production was resumed in Yekaterinburg.

Both of the above machines were already with diesel engines, which significantly improved the operational properties of trucks based on the Ural-375. And the appearance of the Kama diesel under a long hood opened a new era in stories "Ural Masters." What did the car eventually have more: pros or cons? Be that as it may, this is a topic for another story.

We are in Yandex Zen
ZIL-131. The last hero of the plant named after Likhachev
Multi-axle rocket carriers
38 comments
Information
Dear reader, to leave comments on the publication, you must to register.