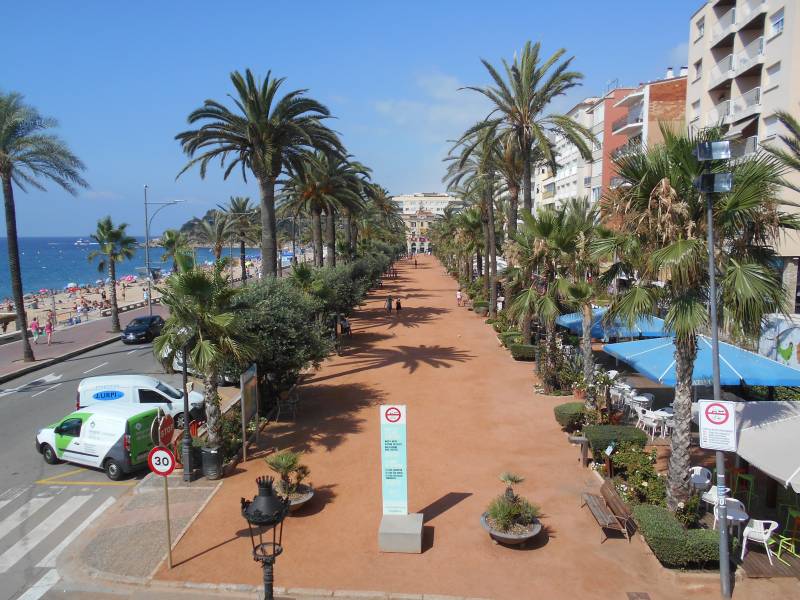 “On the palm embankment, he got everything he owed.”
L. Stevenson. Treasure Island

Military museums of Europe. The street is slushy winter, I want the sun and the sea. I involuntarily recall the summer, when all this was in abundance. But summer is not only about relaxation, swimming in the sea and traveling to various interesting places. It is also an acquaintance with these interesting places.

Today we will talk about one such interesting place: the maritime museum of the Spanish city of Lloret de Mar. The name of this city is already mentioned in 966 AD. e., it is true, like Loredo, and indeed it is very ancient, since three Iberian settlements of pre-Roman times were discovered on its territory, and then the castle of St. John to protect against pirate raids. It has been reconstructed, and we will definitely tell you about it, but today we will talk about another interesting place in the city - its maritime museum. True, it can be attributed to the military museum only with a stretch, because it is a maritime museum, but on the models of ships that are displayed there are guns, and if so, it still has some relation to naval affairs. In addition, to know that he is there is very important. Every year, more and more Russian tourists go to Spain, who have already pretty well mastered this city with a beautiful palm embankment, amazing clean sand, which for some reason does not stick to the skin at all, and ... this museum. Which, incidentally, they, often even having been in it for a week or more, and already starting to miss, often do not even know. Rather, they do not notice him on the promenade among palm trees. 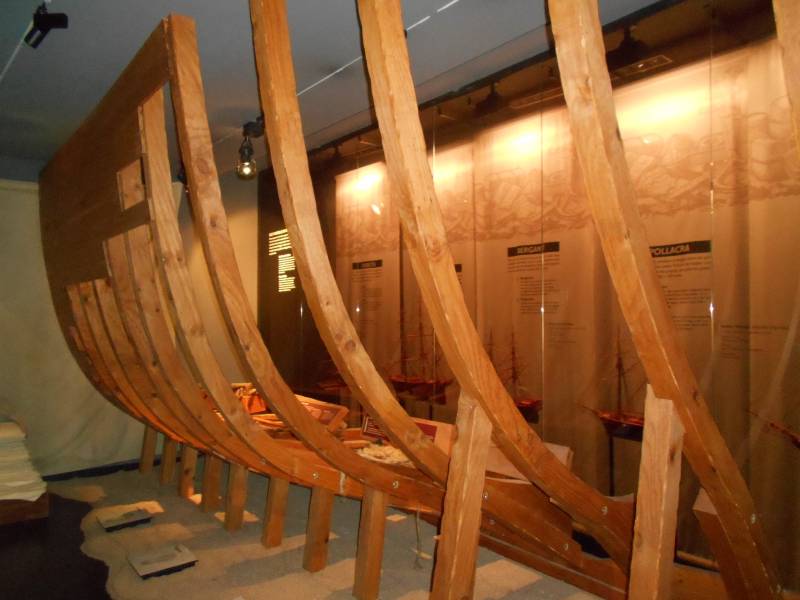 The museum reproduces the skeleton of an old life-size sailing ship. Particularly impressive for women and children!
By the way, it is believed that the unusual name of the city comes from the Latin Lauretum - "a place where laurel trees grow." It is believed that the laurel tree is also depicted on the coat of arms of the city. But in fact, this is not at all the case: it depicts a berry tree, which today still grows in the forests around Lloret de Mar. 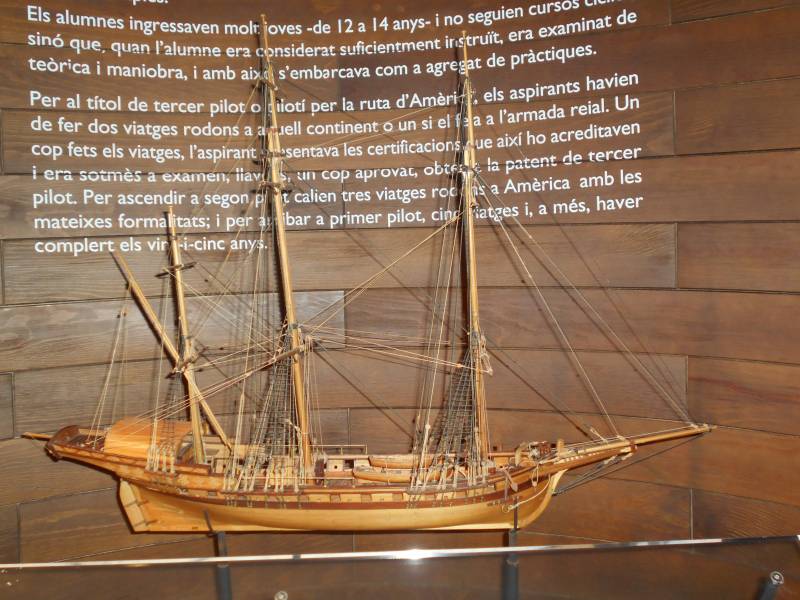 The museum has a simply amazing collection of purely wooden unpainted models, striking craftsmanship. All of them are a collection of the former local yacht club, transferred to the museum. Moreover, there are many, not one or two, but dozens, allowing you to see firsthand all types of sailing ships in the Mediterranean. That's just due to the fact that they are all behind glass, it is almost impossible to photograph them 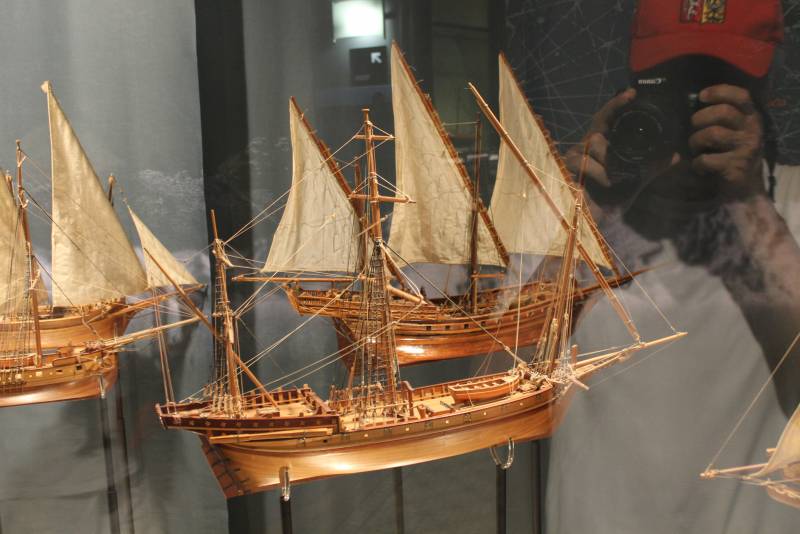 And what kind of sailing ships are not here. But ... you take pictures of them, and involuntarily you shoot yourself ... And what can you do, since they are all behind glass
Well, the Maritime Museum is located right on its promenade, with a magnificent view from its azotea to the sea and its palm alley, stretching right up to the city hall. The building in which the museum is located is called Can Garriga - it is a three-story house of the Indianos family (local residents who emigrated to America and then returned to their homeland), characterized by a large historical and architectural value, and acquired by the mayor's office in 1981. Such a locals here has a strange custom: to go to work in America, but then be sure to return. Moreover, those who returned with money usually made a feast upon arrival, built a posh house and led a happy life as a rentier, but those who were “unlucky” were subjected to general ridicule. But also returned. That's how ... 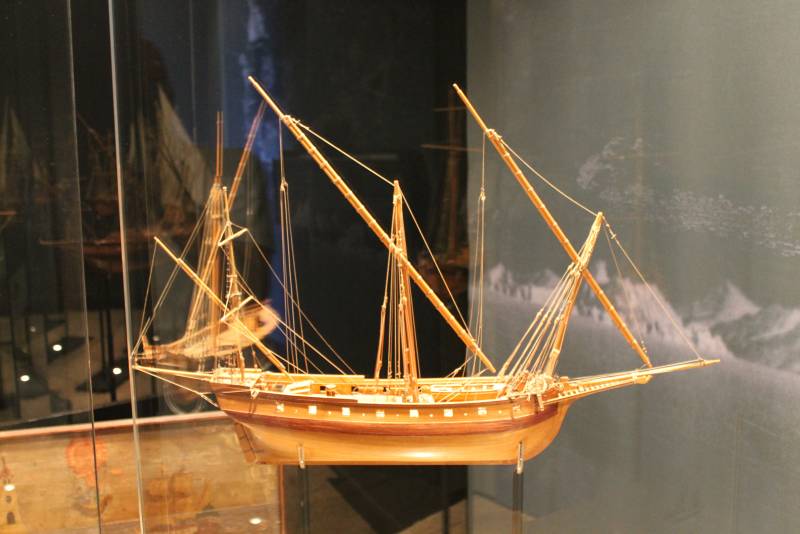 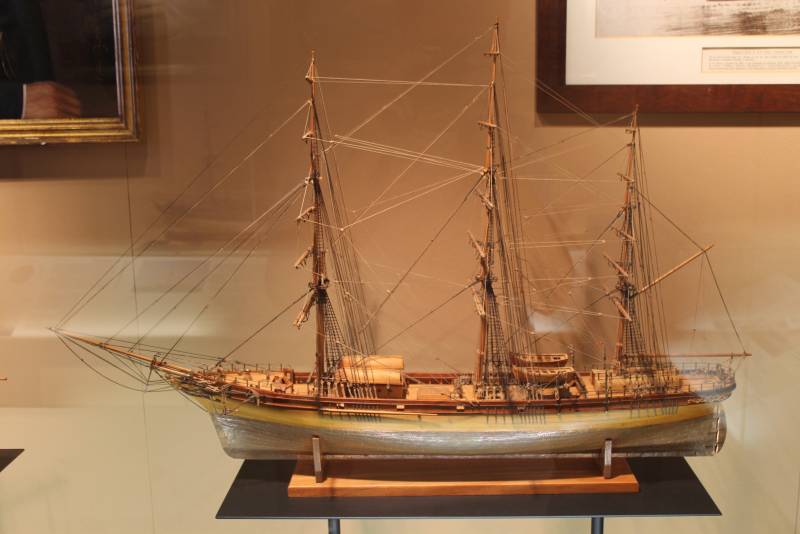 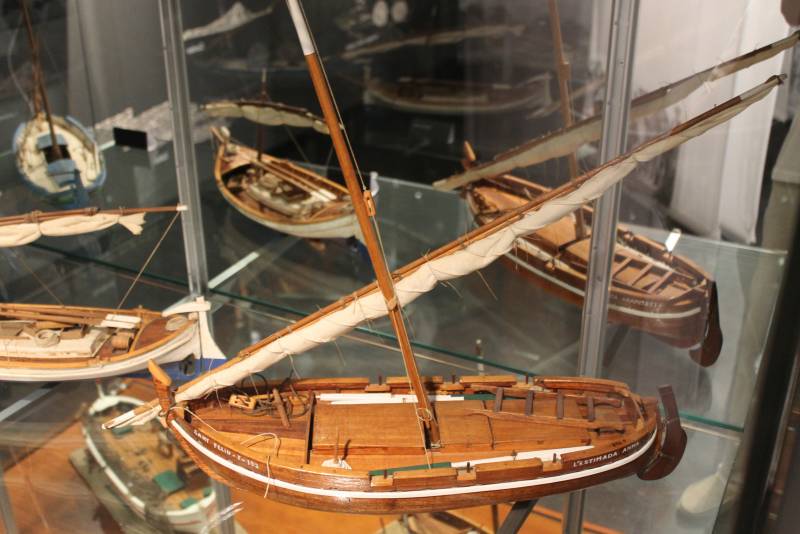 In addition to models of large sailboats, frigates, brigs, corvettes, pinas, the museum’s collection has a lot of fishing boats, purely local production and they are very decorative and exotic
The museum houses a collection of ship models of Lloret's yacht club, which, according to experts, is simply magnificent, as well as a collection of items related to sailing, selected so that museum visitors get the opportunity to enjoy the spectacle of beautifully executed models and get acquainted with the culture and history of the sea town of Lloret. 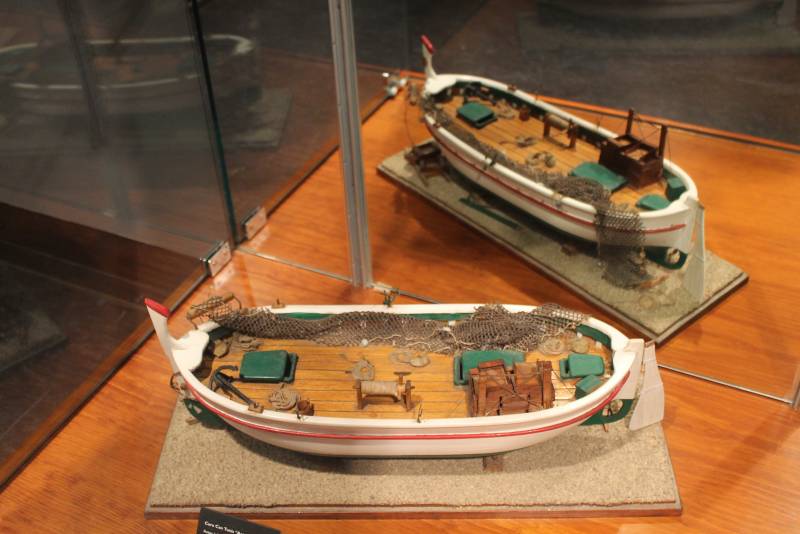 Very funny, right?
A visit to Kan Garrig’s home is in itself a kind of journey into the past. It begins with memories of Lloret’s relationship with the sea, whose origins go back in time. Then this “narrative” tells about trading coastal voyages in the Mediterranean Sea with a load of wine, which for some reason was taken from one coastal city to another, as if there wasn’t enough wine there (it’s in Spain!), And the adventures of sailors from Lloret In the open sea. The history of the sailboats presented in the museum ends with the advent of steam engines, the loss of overseas colonies by Spain in 1890 and the return of those who had once left here. Moreover, some of them returned to their hometown with a great fortune, while others had, as before, to engage in fishing, working in the fields or in the forest. So, having passed through the museum, you can get an idea of ​​not only the sea and fishing vessels of Lloret de Mar, but also its history, as one of the typical cities of the coast of Spain. 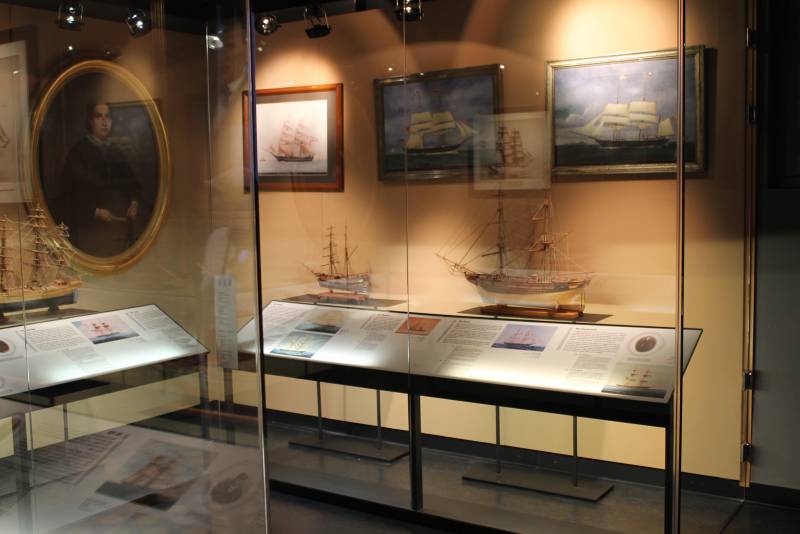 And here is the distant sea voyages of Lloret sailors
The construction of the house where the museum is located is also described here, and here you can also watch a colorful movie about all this. And it is very good that in each of the halls of the museum there is a set of leaflets with text in different languages, including Russian (!), Which tells about the contents of its exposition and the history of the city. Not every major museum of European capitals can meet this. And here is a small town, but all the information is not only in Spanish, English, French and German, but also in Russian. And rightly so, that is how it should be today. 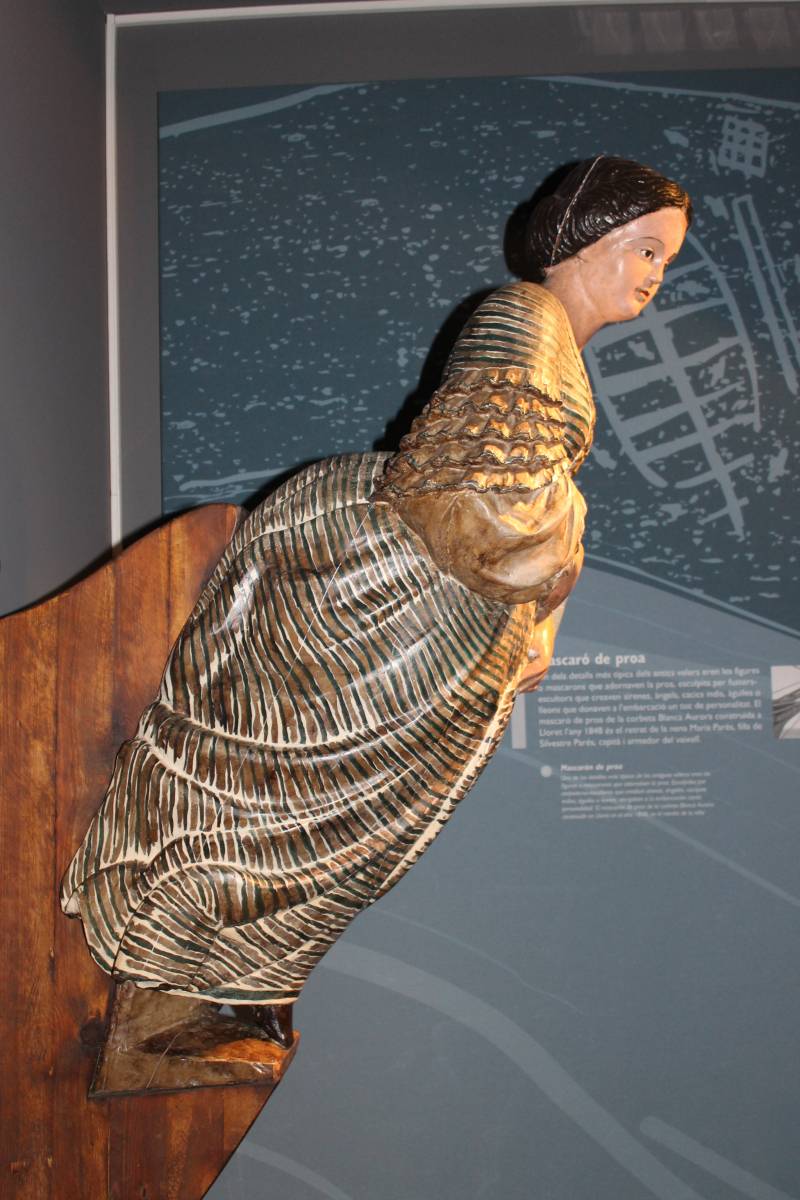 The nasal figure of one of the Lloretian sailboats. Well, what without her ?!
The museum has several sections. Having passed the first one, which tells about the history of the city and the house, we find ourselves in a hall with a very meaningful name: “Mare nostrum” (“Our Sea”). And for the inhabitants of Lloret, it really was "ours." After all, wherever did they swim in the Mediterranean Sea! Here you can see the models of merchant ships and the products that were transported on them, as well as those “traces” that these trade relations left in the history of the city; photographs of his famous historical figures, and most importantly - documents, paintings, prints, objects. 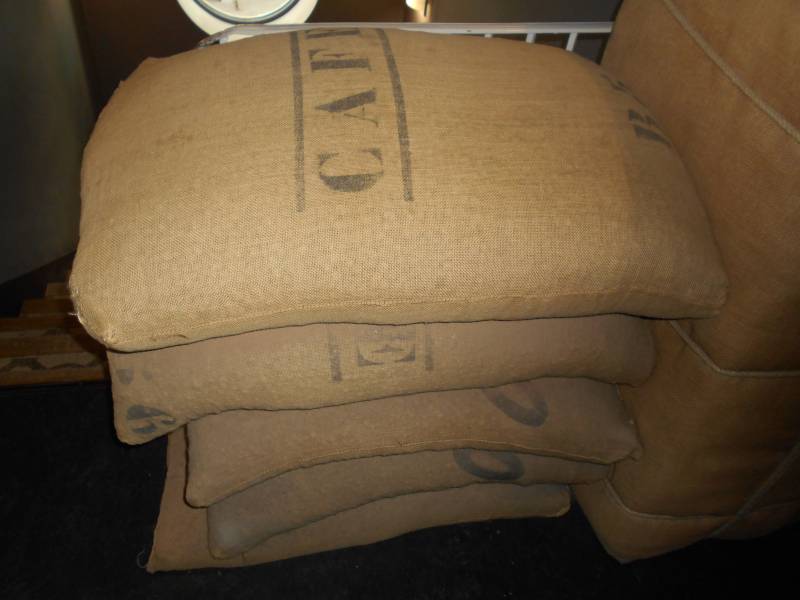 In such bags they brought coffee from America
The third room is called the Gate to the Ocean. Indeed, it seems that Lloret, turned towards the Mediterranean, was indeed such a gate for its inhabitants. They hired to serve in the Spanish navy and participated in campaigns in distant seas and oceans, participated in sea battles, fought bloodthirsty Algerian pirates. 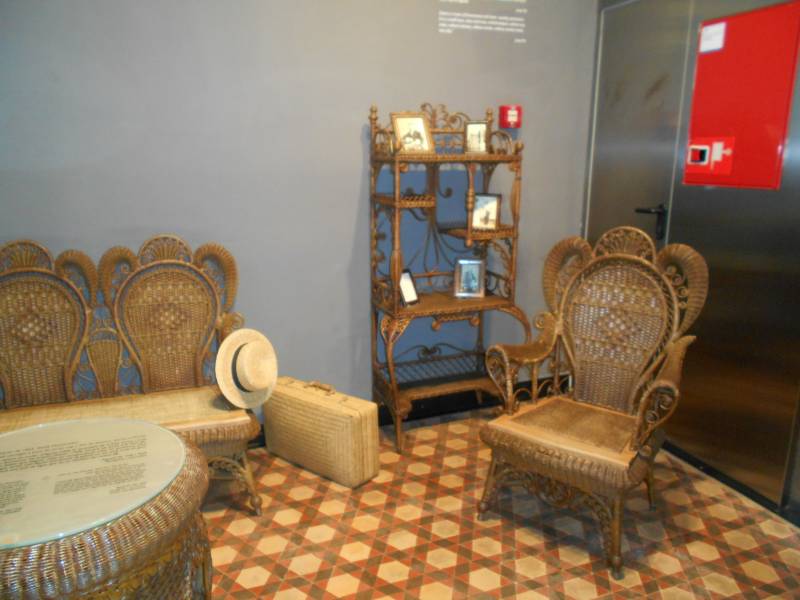 Wealthy traveler cabin interior
This part of the exhibition begins with the royal decree of Charles III, by which he allowed the inhabitants of Lloret to build their own ships for trade with America. It tells about shipbuilders and shipowners, various types of long-distance vessels, as well as technical devices and tools that were used for their construction. Rounding Spain, through the Strait of Gibraltar, the Lloretians went to the Atlantic and sailed to Mexico, Cuba, Brazil and the USA. They brought barrels of Spanish wine, and brought back cochineal and indigo, cotton and rum, bales of red pepper and coffee. The names and surnames of the families of the sailors from Lloret who made such voyages are carefully preserved to this day. 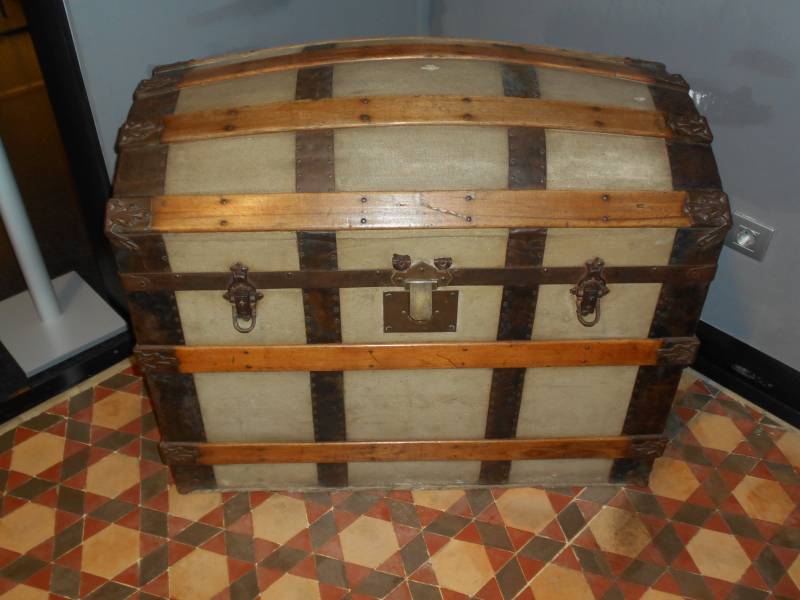 “Fifteen people on a dead man's chest! Yo-ho-ho and a bottle of rum! ” - here it is, it turns out, the chest of the sailor, about which is sung in this pirate song
The Lloret After Sailing Hall is, of course, dedicated to the era of steam. Yes, the time has come when romantic sailing ships ceased to be competitive, and the overseas colonies of Spain were lost. Life in Lloret froze. Now there lived fishermen and farmers. But the inhabitants of the town found a way out of the situation, now at the expense of the forest surrounding it. They took up the production of barrels and corks. They obviously could not foresee the tourist "revolution" that occurred here later, with the onset of the XNUMXth century. But they did not sit idly by, but tried to find their niche in the country's economy - and they did! 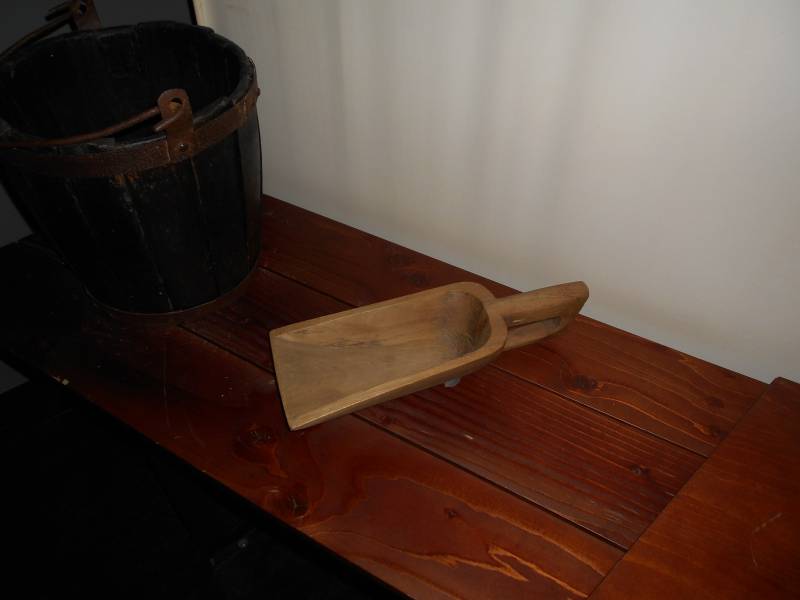 An important accessory of any fishing boat is a scoop for scooping up water
Well, then, after 1975, tourists from northern, cold countries began to arrive here a little. But the museum’s exposition diligently emphasizes that Lloret is “not only the beach”, but that the city has many cultural attractions. And by the way, this is true. This is the picturesque arboretum “Clotilde’s Gardens”, and the art gallery, where most of the exposition is occupied by paintings by our Russian artist dedicated to Lloret (!), The tower-castle of St. John and the archaeological parks of the excavations of the ancient settlements of Iberians. Although they do not make much impression on non-specialists, well, what can you do if they lived openly wretched, albeit with a beautiful view of the sea. But in general this museum makes a very, very pleasant impression. This is the real story of people who never forget that the sea gave them life. 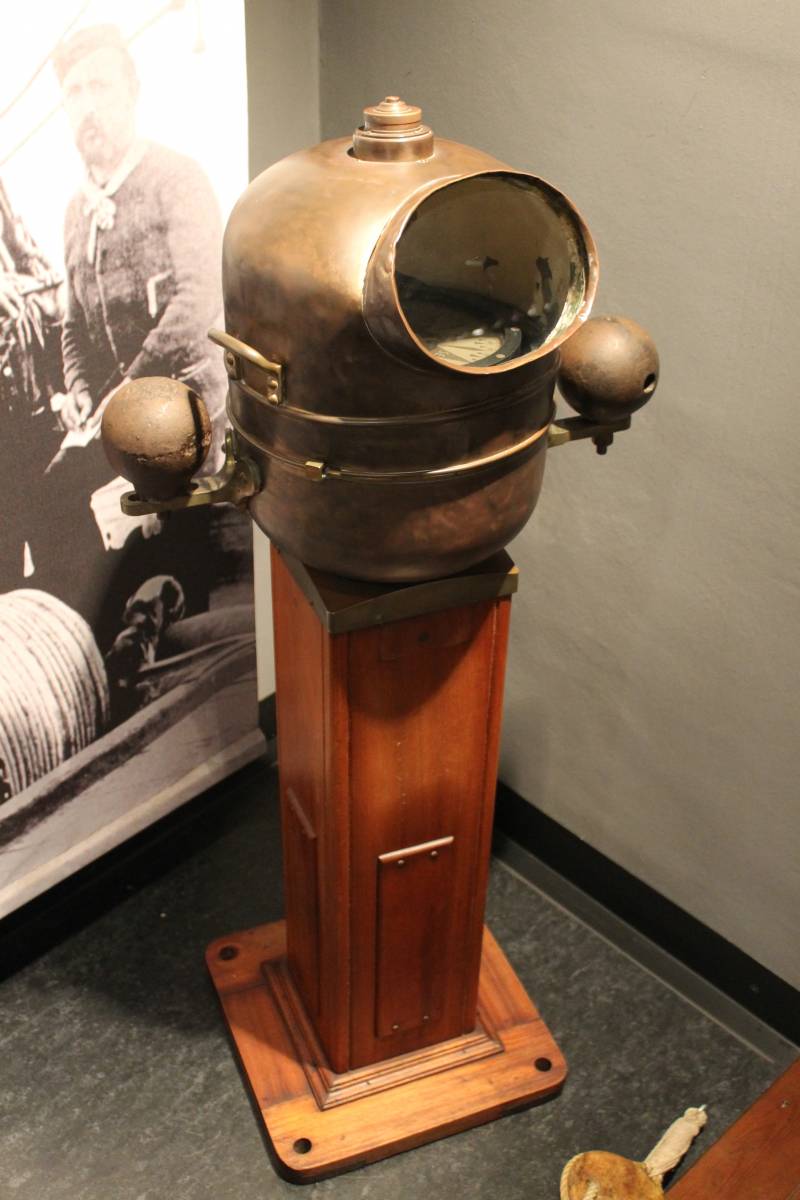 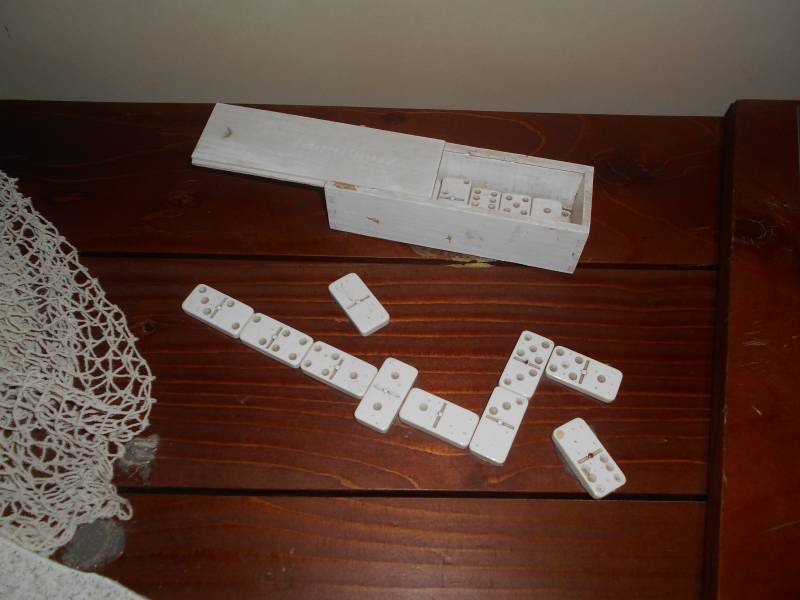 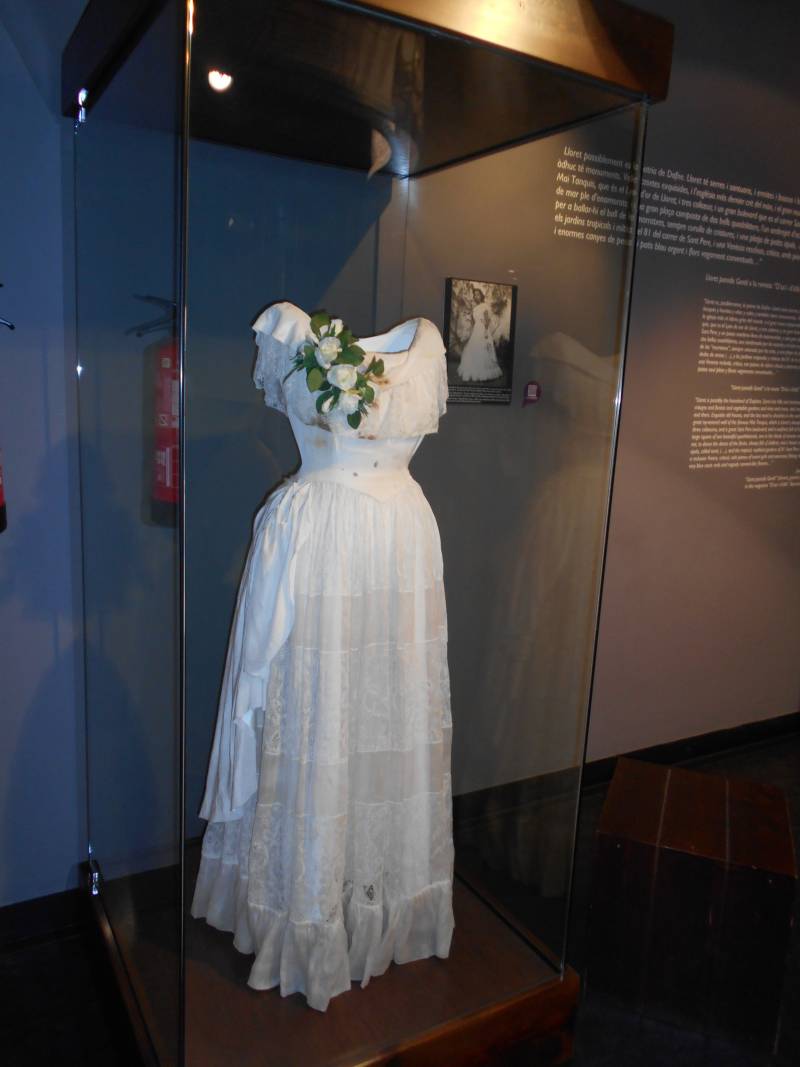 Upon returning, the “Indianos” were to build a house, and also marry local beauties and buy them such wedding dresses!

Author:
Vyacheslav Shpakovsky
Articles from this series:
Royal Armory in Madrid. Weapons and Armor Collection of the Spanish Kings
Polish shells, Austrian hussars and Turkish fives
Cuirassiers in museums
Enemies of the Cuirassiers
With whom the latniks of the emperor Maximilian fought?
“A small discovery in the butt of an arquebus ...”
Horsemen of the Eighty Years War
Horses and saddles of the XVI-XVII centuries
“By people and by horses, not by aer”
Ordonance companies
“It's a miracle if someone is killed with a spear”

We are in Yandex Zen
Chernobyl notebook. Part of 3
Father told
96 comments
Information
Dear reader, to leave comments on the publication, you must to register.