In 1930-32, Soviet organizations and enterprises dealt with chemical armored vehicles. The experimental design and testing bureau of the Department of mechanization and motorization of the Red Army and the Kompressor plant (Moscow) together created four projects of such equipment at once, but all of them failed. Nevertheless, with their help it was possible to accumulate the necessary experience and on its basis to make a full-fledged chemical armored car. The KS-18 machine was able to get into the series and serve in the army.

The benefits of failure

Projects D-18, D-39, BHM-1000 and BHM-800 developed by OKIB and "Compressor" proposed building chemical armored vehicles based on several types of trucks. Instead of a body, a tank for chemical warfare agents was mounted on the chassis, and equipment for spraying them was placed next to it. Some of these projects included the use of cabin and tank reservations.

Tests of several prototypes showed their failure. Auto chassis worked fine only on roads, but not on rough terrain. Armor protected people and chemicals, but reduced carrying capacity. Self-defense weapons were absent.

According to the results of the analysis of the tests, the requirements for the next chemical armored car were determined. As before, it was proposed to use a serial truck chassis, but this time with a larger payload. The car must have been booked, as well as armed with a machine gun. A chemical tank and spray devices had to be placed under the armor.

In this form, the armored car of the "chemical attack" could solve all its problems with minimal risk. He had to spray BOV, perform degassing or smoke screens, including at the forefront.

In 1934, the Vyksa crushing and grinding equipment plant received a task to develop a new chemical armored car. The basis for this sample was a ZIS-6 truck with a load capacity of 6 tons, on which a tank and spraying equipment KS-18 of the Compressor plant were installed. According to some reports, several such machines were built, and they were used to a limited extent in the Red Army as training. 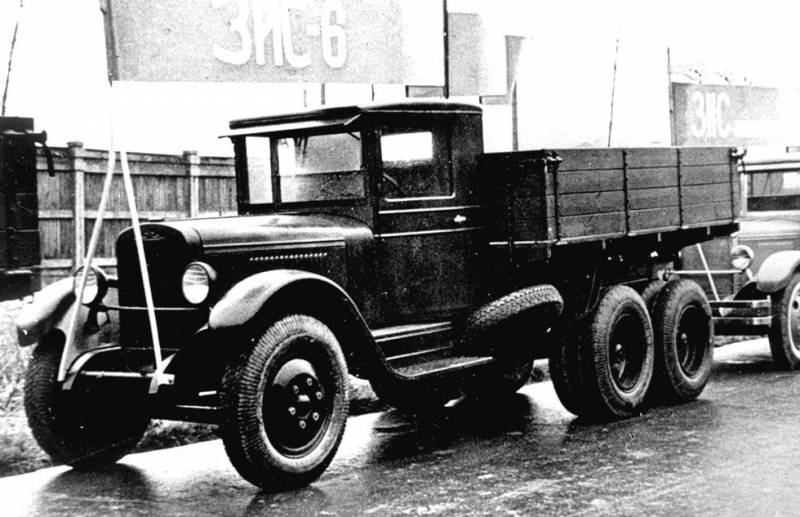 Truck ZiS-6. Photo Kolesa.ru
A chemical machine based on ZIS-6 possessed the necessary reserve of characteristics for further development. In this regard, in 1935, the military chemical department of the Red Army instructed the DRO plant to equip this model with armor and weapons.

The chemical armored car project “inherited” the name from the KS-18 chemical spray system. In some sources, it is also referred to as BHM-1. It is curious that this name is sometimes found in the context of the BHM-1000 project. These circumstances can lead to specific situations: an armored car can be confused with an unprotected vehicle or even with chemical equipment for both samples.

The ZIS-6 chassis was built on the basis of the frame and had a 6x4 wheel arrangement. The power unit included an engine with 73 hp. and a four-speed gearbox. Power was transmitted to two rear drive axles with the possibility of selection for additional equipment. ZIS-6 in the initial configuration had a curb weight of more than 4,2 tons and could carry a cargo of 4 tons.

A riveted armored case was mounted on the serial chassis. Sheets of armor were made by an adjacent enterprise, and their installation on the frame was carried out by the DRO plant. The case consisted of parts with a thickness of 4 to 8 mm and could provide protection only against bullets or fragments. Probably, when developing the case, questions of increasing survivability were taken into account, which affected its design and layout.

The bow of the hull served as a protected hood and covered the power plant. Behind it was an inhabited compartment-cabin of greater height. At the rear of the chassis was placed an armored casing of a lower height with a sloping roof. Inside this casing there was a tank for OWL. By increasing the length of the tank and its casing, the designers were able to reduce their height. Due to this, the main projection of the tank was reduced, and the likelihood of its destruction was also reduced. Next to the tank were placed devices of the KS-18 system.

Side view of the car. Figure Aviarmor.net
The tank contained 1000 liters of liquid chemical. The KS-18 equipment included a centrifugal pump driven by an engine and spray devices. A horseshoe-shaped spray was intended to infect the area. Degassing was carried out using a spray column. It was proposed to use the same devices when setting smoke screens.

For self-defense, the KS-18 armored car received one DT machine gun in a ball mount on the front plate of the cockpit for firing into the front hemisphere. The crew consisted of two people, a driver and a commander, who was also a shooter, radio operator and operator of chemical equipment. In the cockpit there was a 71-TK radio station with a handrail antenna encircling the roof.

The chemical armored car KS-18 had a length of about 6 m with a width and height of about 2 m. Mass is unknown; apparently, this parameter was at the level of 6-7 tons and did not exceed the total mass of the ZIS-6 truck. The car could reach speeds of up to 45-50 km / h and overcome small obstacles. Mobility on rough terrain was limited by the characteristics of the chassis.

In 1935-37, experienced KS-18 armored cars were tested, during which they showed the required characteristics, and in addition, they demonstrated the advantages of the new chassis over the previous ones. The armored car received a recommendation for adoption and arming. 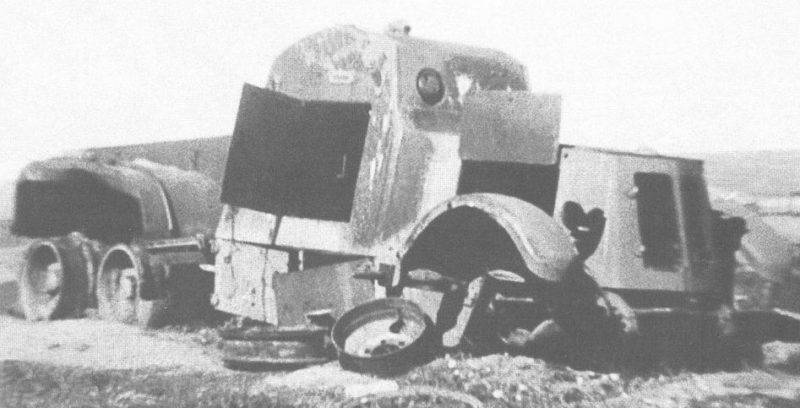 Broken KS-18 on the battlefield, 1941. Photo by MV Kolomiets "Armor on wheels. History Soviet armored car 1925-1945's. "
The first production KS-18 went to the army in 1937. The production of such equipment lasted about two years. During this time, the DRO plant with the participation of "Compressor" and ZIS built 94 armored cars. This technique was intended for companies providing combat support for tank brigades. The state of each company relied 4 armored cars, but not all units were able to fully equip.

Armored vehicles KS-18 remained in service until the start of World War II and, together with other equipment, took the battle. During the war, the Red Army did not use a chemical weapon, and therefore KS-18 did not infect the area. They also did not have to perform degassing. Apparently, the armored cars from the tank brigades could fulfill the functions of reconnaissance and patrol vehicles, as well as put smoke curtains.

There is information about the use of KS-18 in the Crimea. In the first weeks of the war there were at least two such armored cars from the 463rd flamethrower chemical company. It is reported that by then the vehicles had lost their chemical equipment and had become “regular” armored vehicles. As of November 10, in Sevastopol there were about 30 armored cars of several types. Perhaps, among them were the few KS-18, who managed to survive the previous battles.

The situation at the front and the specific combat qualities determined the fate of the KS-18. Such a technique, solving unusual tasks, perished in battles. Also, cars could fail for technical reasons. According to various estimates, by the end of 1941 there were no chemical armored cars of this model in the Red Army. Thus, of the 94 chemical armored vehicles built, such as KS-18, not one survived even until the middle of the war.

In August 1941, the State Defense Committee, by its resolution, instructed several people's commissariats to develop and put into series a new version of the chemical armored car with the transfer of the first car until November 1. However, at that time, the industry was loaded with other work and evacuation, which made the development of a new project impossible. Soon, such a task was officially canceled, which put an end to the long-term program for creating chemical armored cars.

As a result, the KS-18 chemical armored car took an interesting place in the history of Soviet armored vehicles. He was the first model of his class to enter service. He was the only development of this kind, which took part in real battles. And with all this, he became the last representative of his class in the Red Army. It was not possible to create a new armored car to replace the KS-18, and then our army abandoned all this direction.

We are in Yandex Zen
Projects of chemical armored cars on serial automobile chassis
D-15 chemical tank: unsuccessful platform
11 comments
Information
Dear reader, to leave comments on the publication, you must to register.