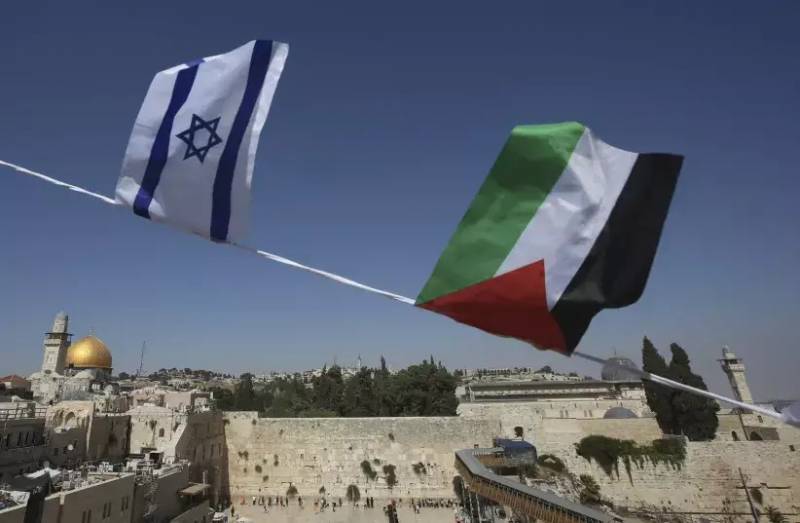 Undoubtedly, the “deal of the century” announced by President Trump at the White House is the greatest diplomatic achievement of a right-wing religious Zionist Israel. Israeli Defense Minister Naftali Bennett said we won the lottery. "Deal of the Century" means US approval of the annexation of the Palestinian territories occupied by Israel in 1967.

The question remains, of course, to what extent the United States can influence the processes in the Middle East. Iraq, Afghanistan, Yemen, Syria - all this shows that America is not omnipotent there. The Palestinians received the worst offer they have ever received. Despite the words of an independent Palestinian state with its capital in East Jerusalem, Jerusalem is immediately proclaimed a single city.

These are not even bantustans, as many write. Bantustans had a whole territory, and here is a patchwork quilt. I traveled to South Africa after the 1982 Lebanon War. The Israeli army sent delegations to exchange experiences there and borrowed a lot from their experience in population control.

Palestinians are required not only to carry out a “deal of the century”, but to prove their good behavior in every way. It is unlikely that the Palestinians will do anything. The only possible model of an “independent state” is ten years imprisoned in Gaza. Yes, and will anyone exercise? All the terms of Abbas’s presidency have long expired, and many believe that the Palestinian Authority’s administration will fall apart, and with it the security forces involved in maintaining order on an Arab street. Palestinians warn that this could trigger a new uprising - the intifada.

How much is the "deal of the century"? 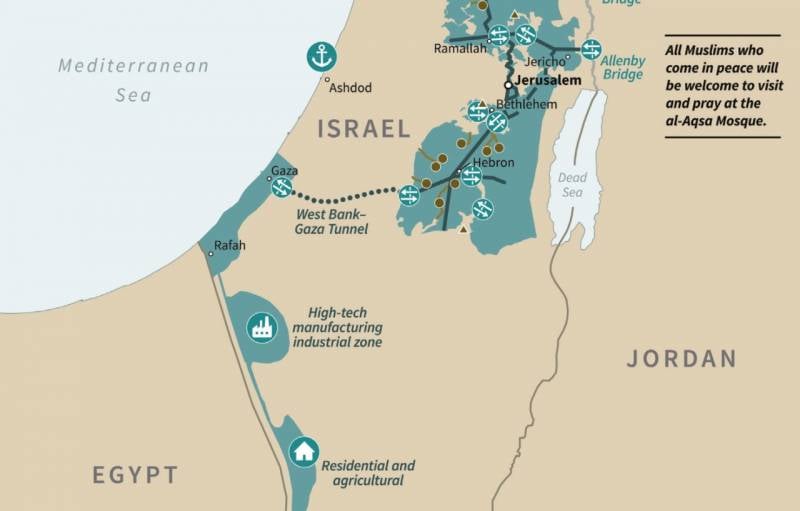 Century Deal Card
The economic part recorded 50 billion. The amount, at first glance, is large, but unrealistic. There is a clause on individual settlements that will come under Israeli jurisdiction, and separate roads should be laid there. Their estimated cost could exceed 25 billion and cause a bunch of security problems.

In 1998, I interviewed the Deputy Minister of Defense of Israel, Efraim Sneh. He told me that the price of Israel in the deal was to pay for the modernization of the Israeli army, as was done after the 1973 Doomsday War. This is from 300 to 500 billion dollars. After all, they still ride jeeps of the 70s. Since then, the material and technical base of the Israeli army has not been radically updated; there was only patchwork of holes. Israeli operations in Lebanon and Gaza have exposed the severity of the problem. Parents of soldiers raised money for personal protective equipment.

Right-wing Israeli media outlets titled "Annexation Now." In fact, the right-wing nationalist project of Great Israel “Eretz Israel Slam” won, and now between the sea and the Jordan all Arabs in Ramallah, Hebron and Gaza are all Israelis and they have no other country. It is only a matter of time before they gain full civil rights.

Jews and Arabs - this is only one axis of the split of society in Greater Israel. There are also religious and secular, European Jews, Ashkenazi and Sephardi, immigrants from Muslim countries and many others. And Arab society has its own axis of contention. I’m not talking about social problems caused by globalization and neoliberalism. The Israeli state is rapidly becoming Arabized. The Israelis themselves do not like this word and prefer to talk about Levantinization, but geography is fate. On the territory of Great Israel between the sea and the Jordan, there are more non-Jews than Jews. Demography is also fate.

I often recall the phrase I heard from Shimon Peres: "Our past victories are the main source of our current problems."

It is possible that the greatest victory of the right religious Zionist project means the beginning of its decline. If we have to live in a single state, then in contrast to the religious Zionism that dominates Israeli politics, we need not a Zionist myth, but a healthy Israeli civilian nationalism that can unite all these groups into a single nation. Nationalism is not a good word today, but all states where it is more or less comfortable to live have gone through the stage of national construction. No one has yet shown another way. And if the national project failed, it turned out not Switzerland, but Syria or Somalia. And even if Jews can win the civil war, in Israel there are very few who are willing to pay the human and economic price paid by the people of Syria.

We are in Yandex Zen
Situational analysis of the death of the MH17 flight (Malaysian Boeing 777), made on the basis of engineering analysis from 15.08.2014
Bashar al-Assad: In Syria, not the “revolution” that the enemies are talking about, but the revolution of the army and the people against terrorists
100 comments
Information
Dear reader, to leave comments on the publication, you must to register.