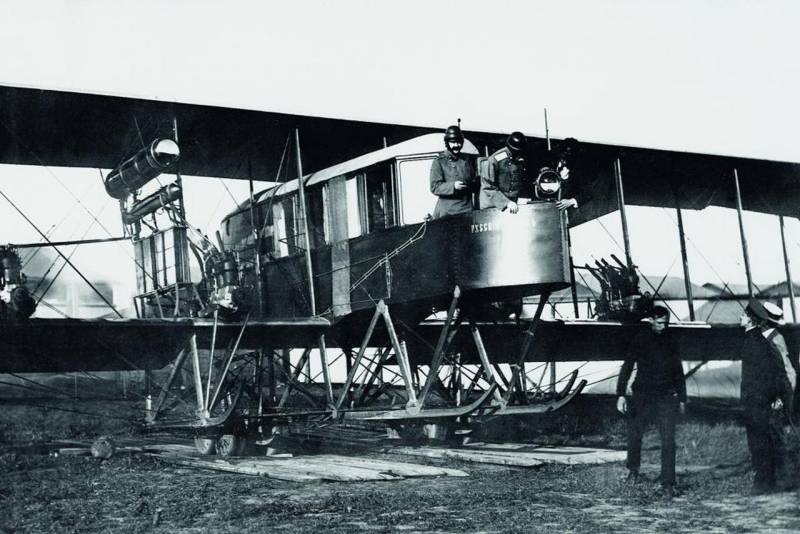 The Russian Knight aircraft became the first four-engine aircraft in stories aviation. Created by designer Igor Ivanovich Sikorsky in 1913, the aircraft set several world records and immediately hit the pages of the world press. Emperor Nicholas II personally came to see the plane, who was delighted with what he saw. The multi-engine machine impressed the imagination of the people of its time, leaving a noticeable mark in the history of domestic and world aviation.

Birth of the Russian Knight

At the beginning of the 1909th century, the Russian aviation industry was in its infancy. The first aircraft factory appeared in the country in 1910, before that in the Russian Empire there were only workshops in which the repair of foreign aircraft was carried out. The construction of aircraft was mainly carried out by enthusiasts, relying on their own forces. In the XNUMXs, the first plants began to appear in St. Petersburg and Moscow.

In 1910, the workshop “The First Russian Ballooning Partnership” was opened in St. Petersburg (the Gamayun plant since 1915). The plant was opened for a loan received from the Ministry of War. In Moscow, a little earlier, after the end of the Russo-Japanese War, a new line of activity was opened by the Dux plant, which launched its first aircraft in 1909. After eliminating all the shortcomings and numerous alterations, the car took to the air in 1910, and until 1917 the enterprise itself was proudly called the Imperial Aircraft Building Plant in Moscow. 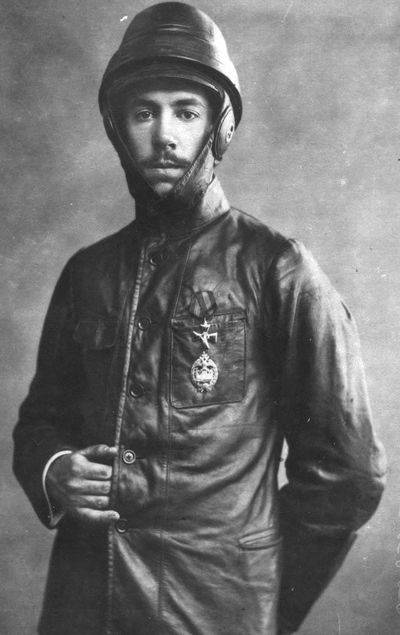 Igor Ivanovich Sikorsky
Another production site for the creation of aircraft was one of the colossi of the industry of the Russian Empire - the Russian-Baltic Carriage Works, familiar to many if not by aircraft, then by the first Russian production cars under the Russo-Balt brand. In 1910, an aviation department was established at the plant in Riga - an aviation workshop, which in 1912 moved to St. Petersburg. In the same year, Igor Sikorsky became the chief designer of the aviation workshop, whose talent and capabilities were believed by the head of the workshop, Mikhail Vladimirovich Shidlovsky. In the future, he provided Sikorsky with all kinds of support.

Mikhail Shidlovsky not only discerned the talent and extraordinary abilities of the future “father of helicopters” and the famous Russian and American aircraft designer, but also contributed to the search for financing for the implementation of his projects. Without his help, Sikorsky would hardly have been able to carry out his plan. The aircraft he proposed was a bold decision not only for Russia, but for the whole world. Initially, Igor Sikorsky planned to create a twin-engine aircraft, but such a project in those years already did not surprise anyone. Projects of twin-engine aircraft were developed in many countries of the world. Already in the process of working on a new aircraft, it became possible to buy four Argus engines, and Sikorsky got the idea to build a four-engine aircraft and did not lose.

By the standards of the 1910s, the proposed aircraft had gigantic dimensions, it is no coincidence that one of its first names was “Grand” (French Le Grand) or simply saying “Big”. In the future, the name “Big Russian-Baltic” was considered, which was to emphasize the belonging of the new aircraft to the manufacturer. And only the third name, under which the aircraft forever entered the history of aviation, was the name "Russian Knight". As they would say now, a very memorable name from a marketing point of view. 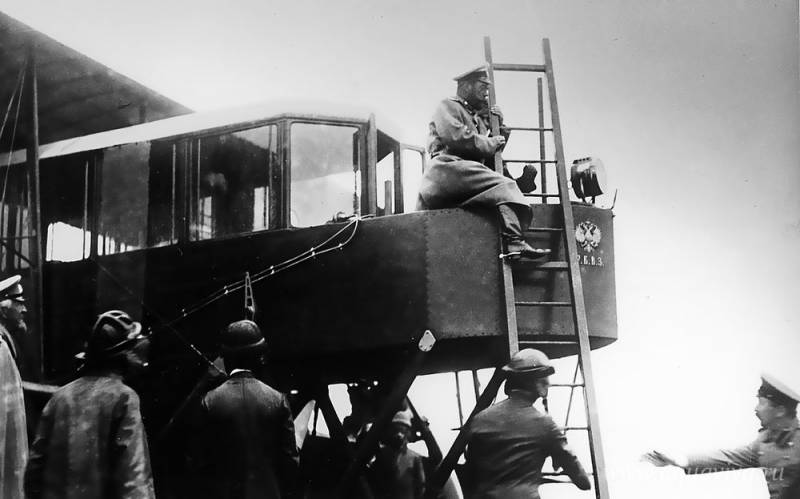 Emperor Nicholas II inspects the plane "Russian Knight"
It is worth noting that many were skeptical of the new Sikorsky aircraft. Few believed that a car with a mass of 3,5 tons could even get off the ground. However, all skeptics were put to shame. Failure did not occur, moreover, Sikorsky created the world's first four-engine aircraft, which could lift more than 500 kg of cargo into the air. Nobody had built anything like it before him. The first flight, which took place on May 26, 1913, was successful. But outside the Russian Empire, many did not believe news about building an airplane. If Twitter existed in those years, US President Woodrow Wilson could have blamed the media for the next Fake News, but the continued flights of the "Russian giant" quickly dispelled all suspicions of journalists around the world.

In the same 1913, but on August 2, the plane set a new world record for flight duration. The Russian Knight spent 1 hour 54 minutes in the sky. After setting the record, all critics and skeptics finally bit their tongues. A little later, the plane was personally inspected by the emperor, who was pleased with what he saw. A photograph has survived to this day, in which Nicholas II sits in an open area located in front of the passenger compartment. After this event, Sikorsky was given carte blanche for all subsequent developments, which ultimately led to the birth of the first four-engine bomber in the history of Ilya Muromets.

Description of the design of the “Russian Knight”

While working on a new aircraft, Sikorsky saw it as an experimental and experimental machine, which, if necessary, could be used for strategic reconnaissance. By design, the “Russian Knight” was a four-engine multi-section biplane, the distinguishing feature of which were wings of different lengths. The span of the upper wing is 27 meters, the lower - 20 meters. The total wing area is 125 square meters. The aircraft is 20 meters long and 4 meters high. The maximum take-off weight with cargo and passengers exceeded 4 tons. For those years, the plane was simply gigantic, although by today's standards it is comparable to small business jets (registered in offshore), which Russian bankers and officials love to fly.

The fuselage of the four-engine Russian Knight was a rectangular frame, which was covered with special plywood. In this case, the frame itself was made of wood. In the center of the fuselage was a passenger cabin, which in its shape resembled a wagon. No wonder the aircraft was developed by a division of the Russian-Baltic Carriage Works. The salon was divided into two compartments. In one there were passengers and crew, the second was intended primarily for storing various spare parts, tools and equipment. It was planned that in case of any malfunctions they could be corrected right in flight. In front of the cabin was an open area with a fence. Here, in the case of using the aircraft in combat, Sikorsky planned to install a machine gun and a searchlight. 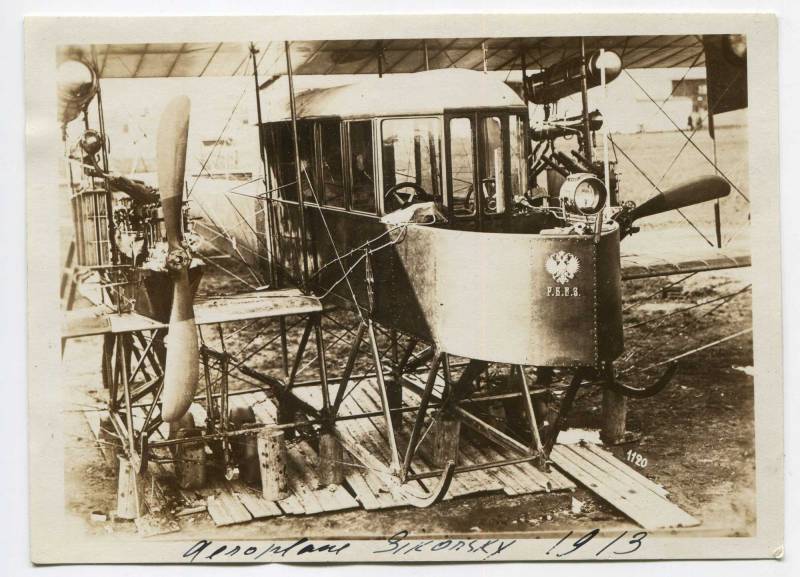 During the development of the aircraft Igor Sikorsky considered various options for the location of four engines, eventually dwelling on a diagram with a row arrangement. All four Argus engines with 100 hp. each were arranged in a row and received pulling screws. In fact, Sikorsky created the classic scheme of a heavy multi-engine aircraft, which is widely used in the aircraft industry today. Engine power was enough to disperse the aircraft in the air to a speed of 90 km / h, and the maximum flight range was 170 kilometers.

Initially, the aircraft was designed for a crew of three and the transportation of four passengers. For those years, the ability to raise seven people into the sky was already a notable achievement. Moreover, the test flights of the Russian Knight demonstrated that the machine is very stable in the sky. It turned out that the passengers of the aircraft can easily move around the cabin, which does not violate the stability of the aircraft and does not affect the flight. For take-off, a four-engine Sikorsky machine had a runway about 700 meters long.

The fate of the aircraft "Russian Knight"

The fate of the first four-engine aircraft in history was unenviable. The plane was seriously damaged in an accident. By chance, this happened when the "Russian Knight" was on the ground. On September 11, 1913, during the 3rd competition of military aircraft, the engine from the Meller-II aircraft fell on the Vityaz standing on the ground. The engine landed on the left wing box and severely damaged the entire structure. 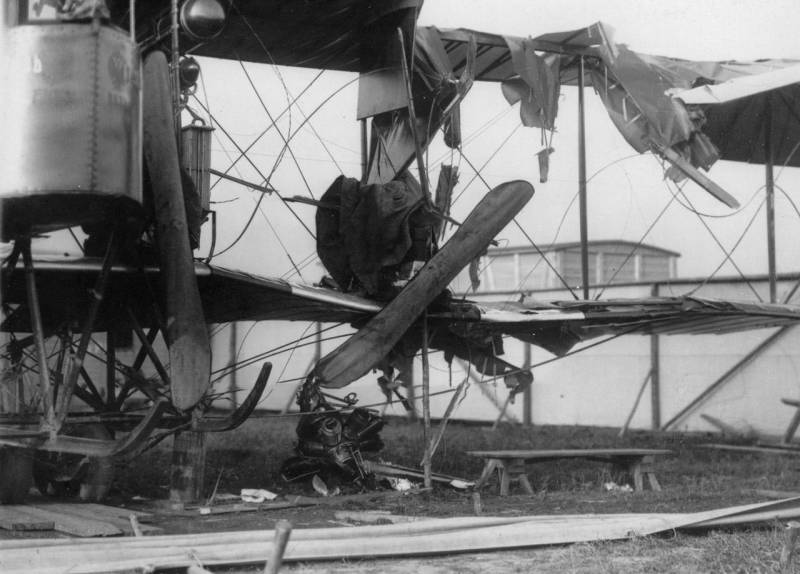 Damage to the “Russian Knight” after an accident
After this incident, the plane decided not to recover. One of the reasons for this decision was that the material from which the plane (tree) was assembled was very damp by that time, so Sikorsky had reasonable doubts about maintaining the strength of the whole structure. In addition, the machine was initially considered as an experimental model, on which it was planned to work out new technologies. The Russian Knight coped with this task with a bang, paving the way to the sky for the subsequent Sikorsky aircraft, primarily the famous Ilya Muromets bomber series, the production of which continued until 1918.

Despite the small history of its existence, Russian Knight opened the way to the sky for other four-engine aircraft, becoming the ancestor of all heavy and strategic aviation. Built in October 1913, the four-engine heavy bomber Ilya Muromets was the first direct continuation of aviation ideas embodied in the Russian Knight.

We are in Yandex Zen
An-12 in Afghanistan
History of Soviet Aviation. Polikarpov P-1 - the first serial Soviet aircraft
67 comments
Information
Dear reader, to leave comments on the publication, you must to register.