The Kuril Question. Will Japan and Russia find a solution? 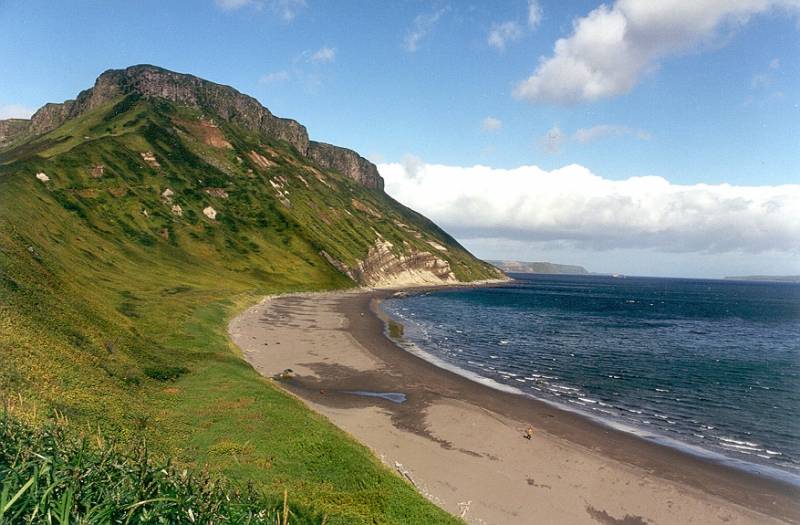 Between Moscow and Tokyo, another diplomatic conflict arose. And he has the same reason that has overshadowed the relations of the two countries for many decades - the Kuril Islands.


A few days ago, the adviser-envoy of the Land of the Rising Sun was called to the Ministry of Foreign Affairs of the Russian Federation. This was done for suggestion about the next demarche of the official Japanese authorities, who did not want to part with claims to Kunashir, Shikotan, Iturup and Habomai. Will there ever be an end to this stories, in fact, which does not give a full conclusion to the war, the 75th anniversary of the victory in which we will celebrate this year?

The reason for an unpleasant conversation for both sides with the Japanese diplomatic representative was an exhibition with the seemingly innocent title “Territory and Sovereignty”, which opened in Tokyo with the explicit and direct assistance of the country's authorities. Everything would be fine, but, in the opinion of the Russian Foreign Ministry, a considerable part of the exposition there consists of materials whose purpose is “an attempt to substantiate Japan’s claims to the South Kuril Islands”. Such things are rightly considered by the domestic Foreign Ministry to be contrary to the agreement reached by the leaders of the two states on "creating a positive atmosphere" in relations between the countries.

No information has yet been received about the official Tokyo’s reaction to this “severe reprimand”. In any case, one does not have to hope that they will be imbued with the incorrectness of their own actions and henceforth will not allow themselves to do something like that.

The “Kuril issue” is a sore subject for many generations of Japanese politicians, and any of them who today even try to hint at the possibility of ending the “irreconcilable struggle for the return of the Northern Territories” will thereby make a political “hara-kiri” and put an end to their own careers . However, judging by the intensity of passions that reigned in the domestic media about the “surrender of the Kuril Islands” that has been tried by some, the reaction of Russian society to any attempts by Moscow to soften its position on this issue will also be extremely negative.

It is hardly worthwhile within the framework of this material to try to recall the entire long history of the complex difficulties that have accompanied the attempts of the two countries to find at least some mutually acceptable compromise in the dispute around the Kuril ridge. No place is enough, and why repeat well-known things. During the negotiations going on since 1956, there were several points when the question would seem to be close to resolution. That Khrushchev was ready to give the Japanese Habomai and Shikotan, but the Americans got in, then the representatives of Tokyo tried to lure all four islands from Gorbachev in exchange for vague promises of economic assistance, but, surprisingly, they didn’t succeed ... By the way, then the current father participated in the negotiations Japanese Prime Minister Shinzo Abe - Shintaro Abe.

After this, one should not be surprised that the head of the Japanese government took the oath "to put an end to the peace talks with Russia" precisely on his father’s grave. We must give him his due: in the course of a series of meetings with Russian President Vladimir Putin, where the very same “Kuril issue” was at the forefront, Abe showed outstanding negotiating abilities. In accordance with this, a certain softening of Tokyo’s position on this issue took place: the islands there were no longer called “occupied” but “occupied without legal justification,” and after 2016, marked by another personal meeting of the leaders of the two countries, Japan and Russia began to lead joint business activities in the Kuril Islands. However, all this cannot replace a full-fledged resolution of the conflict, the chances of which are still not great today.

Vladimir Putin has repeatedly made the proposal that countries first conclude a full-fledged peace treaty, and already within its framework led a further discussion on the islands. It’s a wonderful option, only in Tokyo it seems that they are well aware that there will most likely simply be no discussion “later”. In no case should our country give up its positions on the “Kuril issue”! It is not only a matter of the richest fisheries, the deposits of unique mineral resources available on the islands and their exclusive economic zone that "overlaps" almost the entire Sea of ​​Okhotsk. The refusal of the Kuril Islands will block the Pacific Fleet of Russia at its current bases, will deprive it of the opportunities for operational deployment, and it will certainly endow it with a completely undesirable neighborhood in the form of US military bases. Moreover, having given slack to Tokyo, one should expect territorial claims from China as well. The comrades there at one time were swaying at such our spaces, in comparison with which the Kuril Islands are just grains of sand in the sea. Then just set a precedent ...

Most likely, the dispute over the Kuril Islands is destined to become one of the eternal problems, which, no matter how they spoil the lives of both countries, is easier to circumvent and hush up than to try to solve once and for all.

We are in Yandex Zen
Kuriles - an integral part of our homeland
"Southern Kuriles" or "Northern Territories"? To be continued
142 comments
Information
Dear reader, to leave comments on the publication, you must to register.