Mi-38: a large helicopter for a small market

In the first part of the story it was mentioned that its first flight the Mi-38 made on Pratt & Whitney Canada PW-127T / S engines, and this in many respects was to ensure the machine’s access to the international market. But times have changed, and within the framework of the state import substitution program, as well as under the influence of high sanctions risks, the main motor for Mi-38 family helicopters is the domestic TV7-117V.

In 2008, Canadian Pratt & Whitney, due to the lack of permission to export its motors to Russia, was forced to abandon further cooperation with Russia. Therefore, I had to pay attention to the turboshaft version of the aircraft turboprop TV7-117CM from JSC "UEC-Klimov" and MMP them. V.V. Chernysheva, originating from the 80s.

Here you can make a digression and ask: what would happen to the domestic aviation motor industry, if not for various Western sanctions, prohibitions and restrictions? Could, in particular, survive in the UEC-Klimov from the United Engine Corporation in the event of widespread replacement of aircraft engines with western analogues? 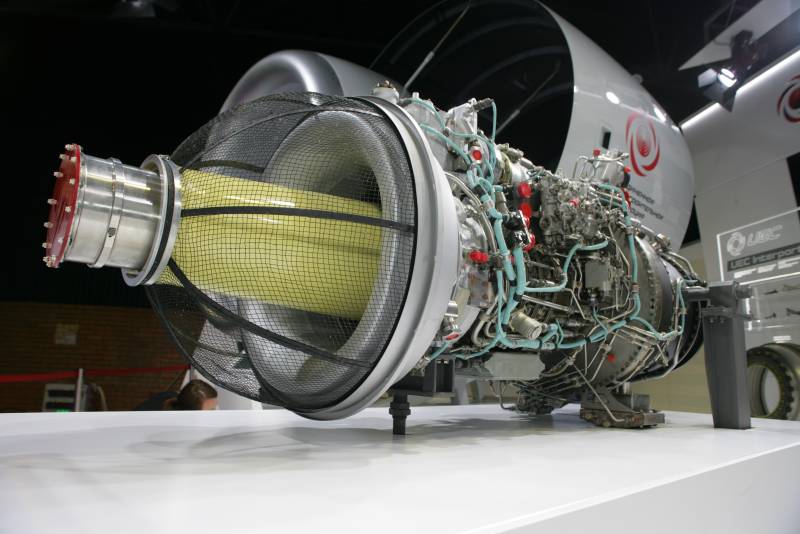 Photo: UEC
TV7-117V
The development of the TV7-117V motor started on December 1, 1989 and was originally aimed at the Mi-38, but then there was an era of devastation. And in the late 90s, Canadians who had fussed in time actually provided the Milev "medium-heavy" rotorcraft with their engines. When they turned away, I had to turn to the UEC-Klimov JSC again. Be that as it may, the Klimovtsy on the architecture of the TV7-117 base engine created many power plants, starting from version C for the Il-114 and Il-114T aircraft and ending with the gas turbine TV7-117K for marine equipment - high-speed catamaran ships.

Work on the helicopter modification at the Klimov Design Bureau began almost immediately after leaving the game Pratt & Whitney Canada in 2009, and two years later the power plants were ready for flight tests on the Mi-38. One of the distinguishing features of the motor was a digital electronic control and monitoring system of the FADEC BARK-6V type. The main task of this unit is to optimize engine performance, reduce fuel consumption, as well as increase the life of individual components. The design is based on a compact and efficient centrifugal compressor with five axial stages and one centrifugal compressor. Unfortunately, the high pace of work inevitably affected the perfection of the motor design. 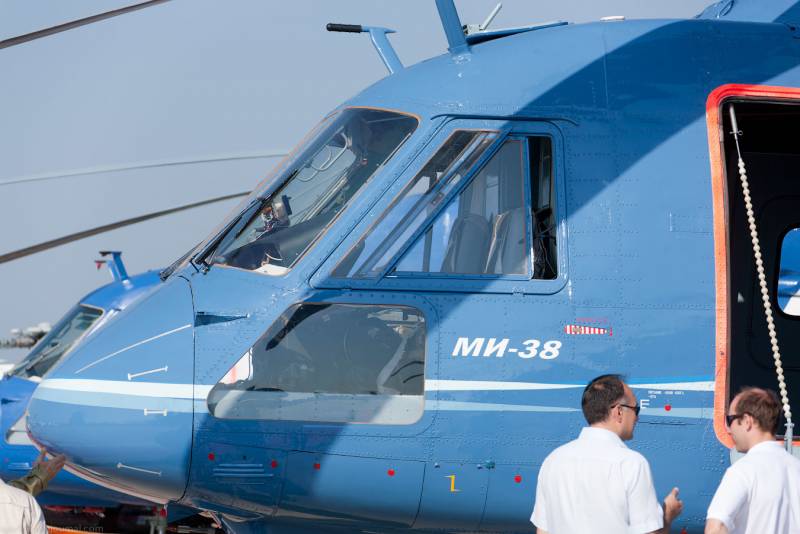 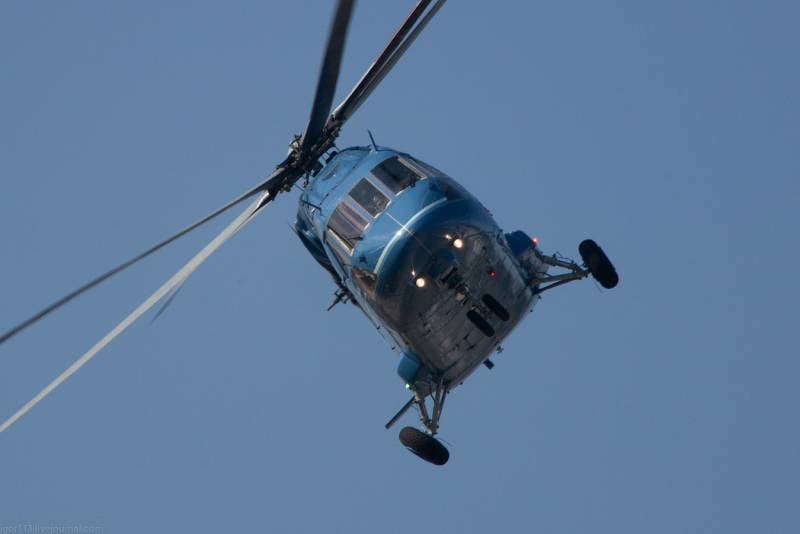 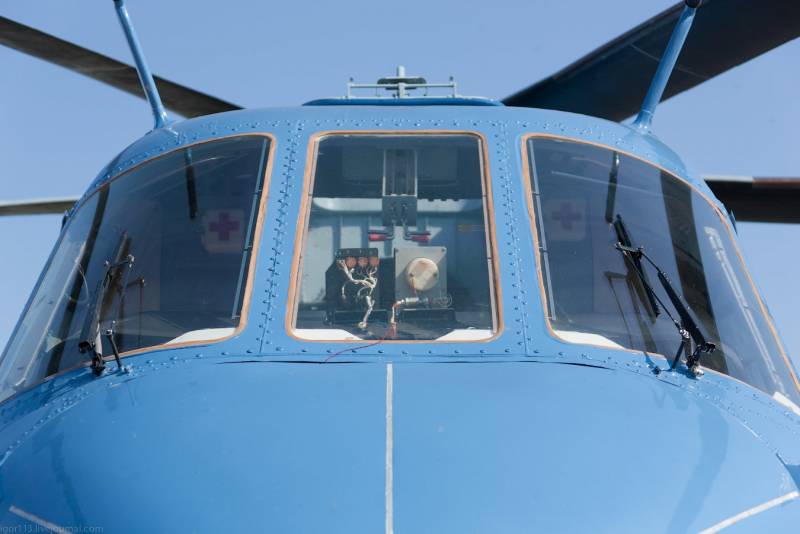 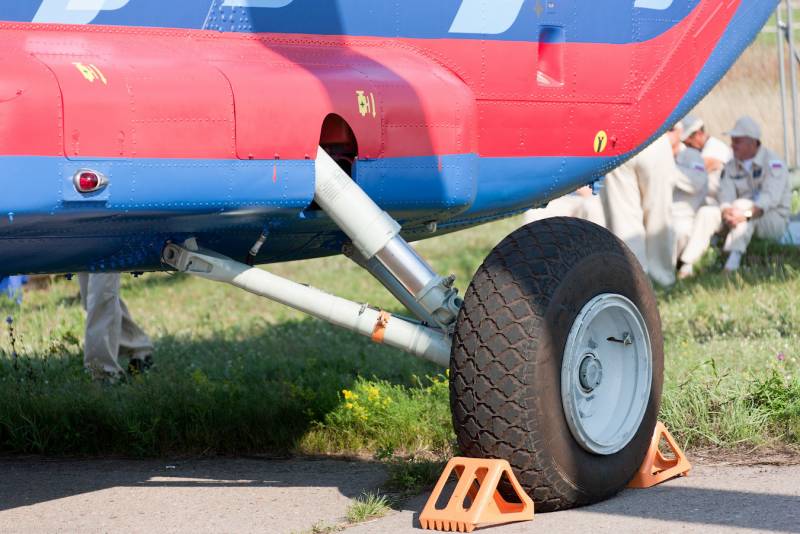 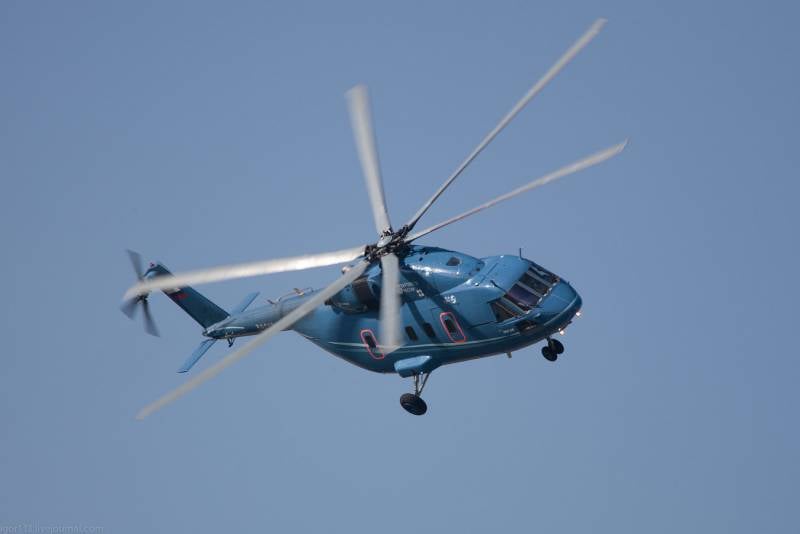 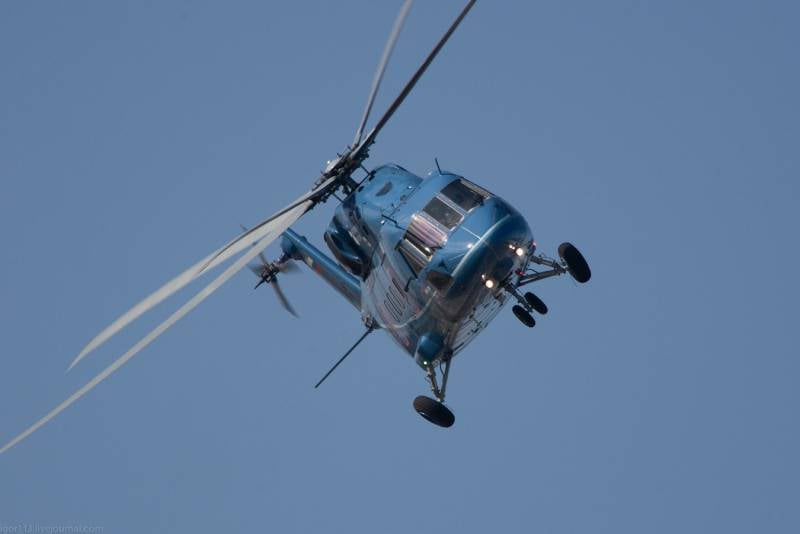 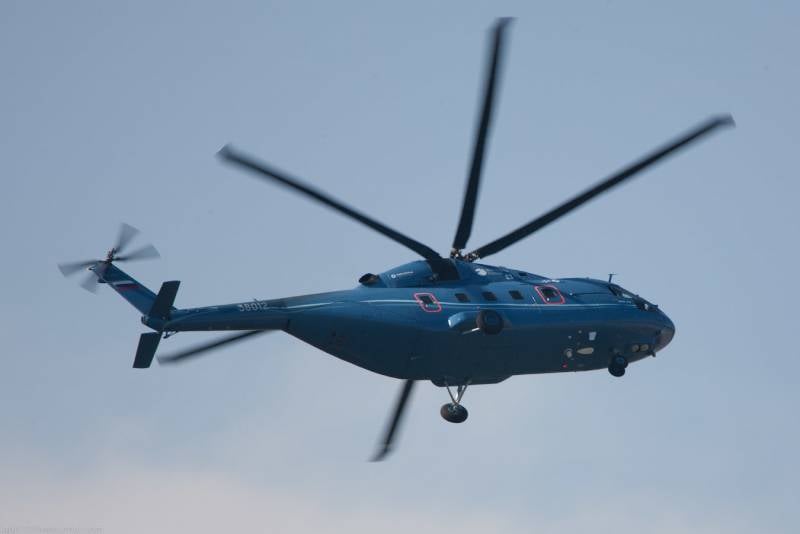 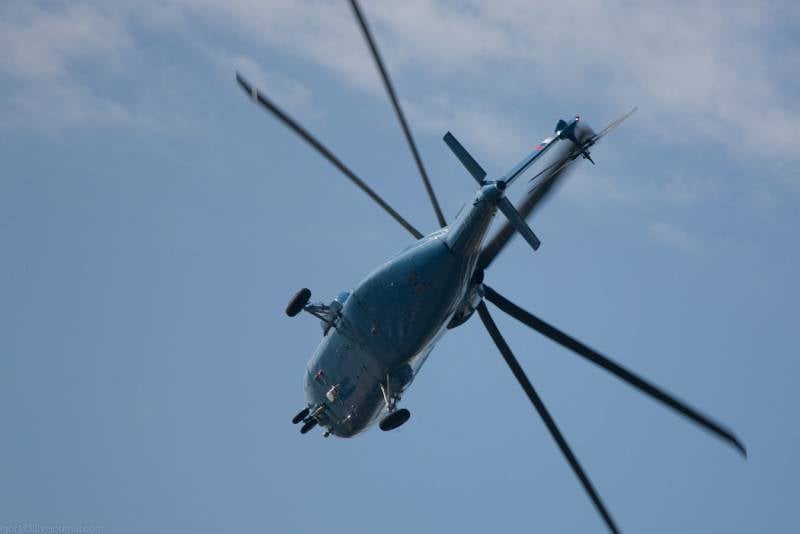 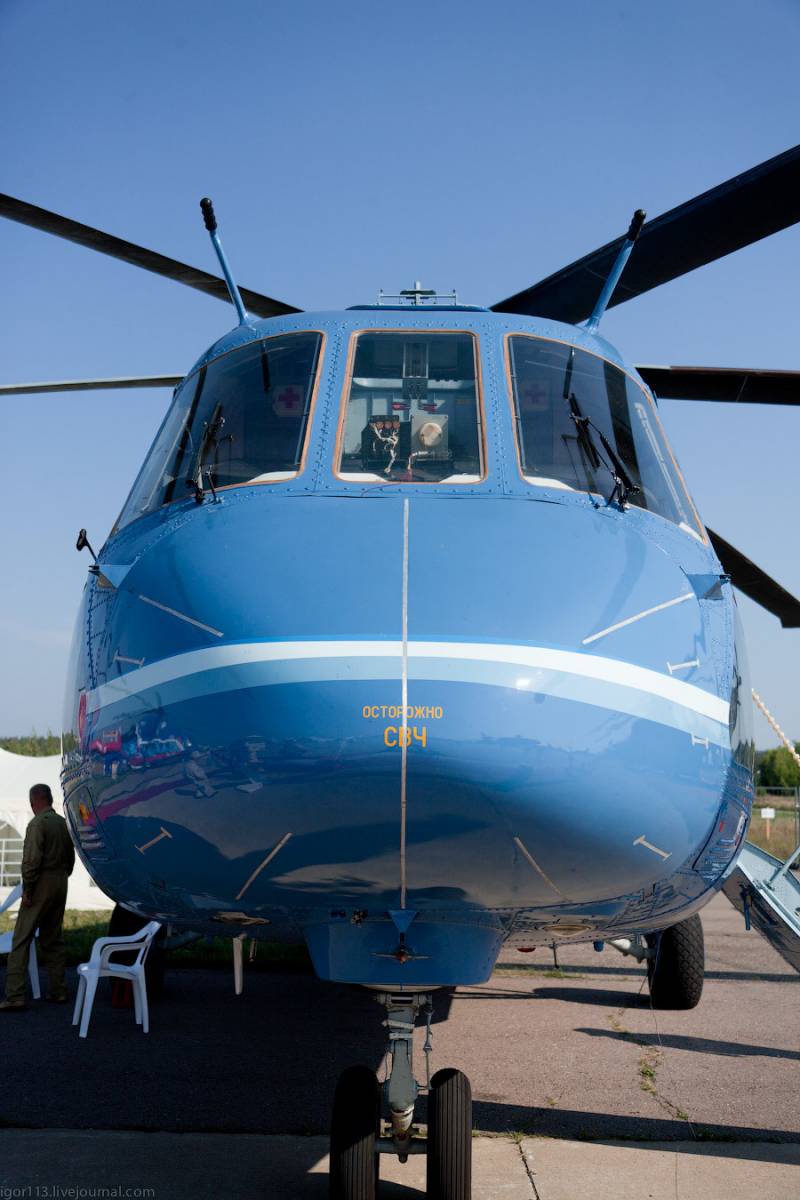 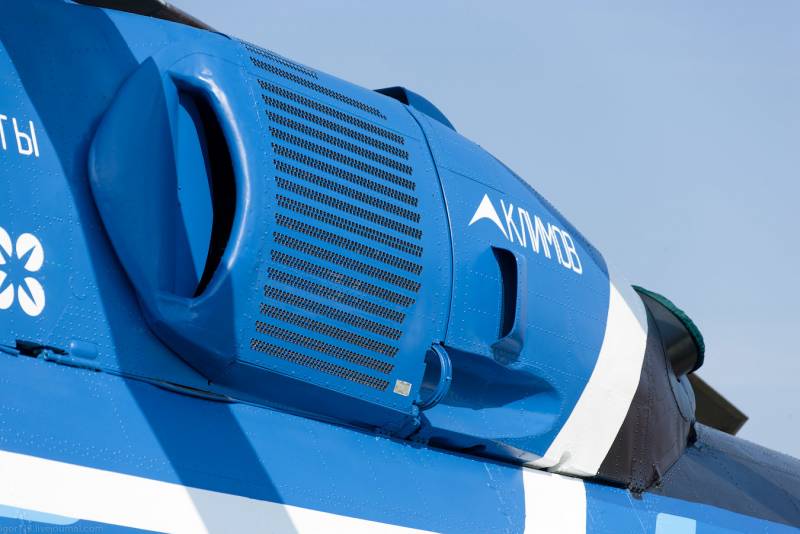 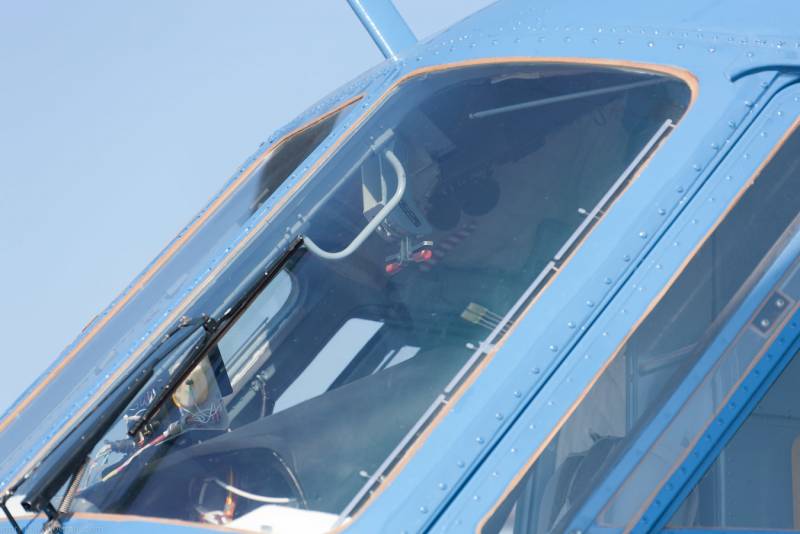 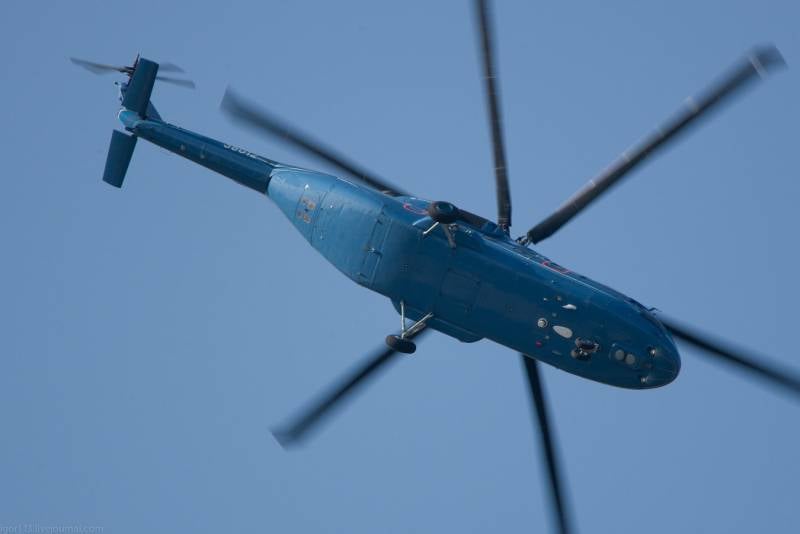 Photo: Igor Kolokolov, igor113.lj.com
Mi-38 in flight and in detail
In 2012, the first Mi-38-2 OP-1 helicopters were assembled (Canadian engines were removed from the cars and delivered domestic) and OP-2, which they planned to show at MAKS-2013, but problems were found when combining the motor with the VR-382 gearbox. As a result, I had to modify the unit, pass it through a 300-hour test and only then put it on a helicopter.

Mi-38 with domestic engines first took off from the ground only on November 13, 2013. Over the next year, the motor was in trial operation, and in May 2015 it successfully passed 150-hour certification tests.

At the moment, a contract for the supply of 50 helicopter engines has been signed with Klimovtsi. Interestingly, the 2800-horsepower TV7-117V can potentially be installed on helicopters with the output of the power take-off shaft back - on the Mi-28 and Ka-50/52. To be completely accurate, a helicopter with domestic engines bears the name Mi-38-2 (it is sometimes still “renamed” as Mi-382), while a copy with Canadian engines is called Mi-38-1.

The dustproof device of the TV7-117V engines works more efficiently than the classic fungal type devices that we are used to seeing on Mi helicopters. The fact is that cars with “fungi” above the cockpit have restrictions on taxiing in a snow vortex in the temperature range from minus 5 to plus 5 degrees. In this range, snow turns into ice and a massive outgrowth forms, blocking the air supply. The Mi-38 dustproof device is devoid of this drawback and provides air preparation in any operating conditions in the range of the degree of purification of 95-98%.

An important advantage of the helicopter is the availability of an auxiliary power unit TA14-038 with a capacity of 30 kW from PJSC NPP Aerosila - the very “heart” without which the launch of the main motor would not have been possible. This is an important factor in the autonomy of the Russian helicopter, since on machines with Canadian engines the engine was started electric. In addition, the additional power plant of the helicopter provides air conditioning systems on the ground.

What else can the latest Russian Mi-38 helicopter boast? First of all, four world records. True, they were beaten by a car with Canadian engines, but this does not detract from the merits of designers and testers. During the first flights, many parameters of the machine showed an excess over the calculated ones - for example, the thrust of the rotor on hover was 500 kg more than "on paper". By the way, the first Mi-38 flights in 2003 and further tests in general turned out to be resonant events. Test pilot Vladimir Kutanin received the Order of Courage from the president for work on the machine, and test pilot Alexander Klimov became the Hero of Russia. During the tests, the helicopter made at least 85 flights, as a result of which a number of changes were made to the OP-2 model: they improved the fuel and hydraulic equipment, the control system and the design of the blades. Mi-38 world records were broken in 2006 and they concerned a record flight altitude of 8170 meters with a mass of 11.100 kilograms and several more achievements in climb with and without cargo. Decent, although not a record, is the maximum speed of the car at 320 km / h, which approaches the limit parameters for helicopters in the classical sense. 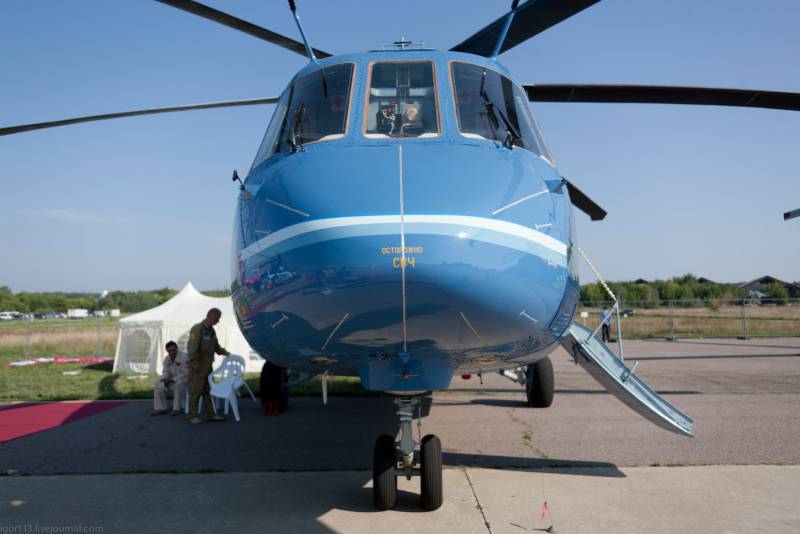 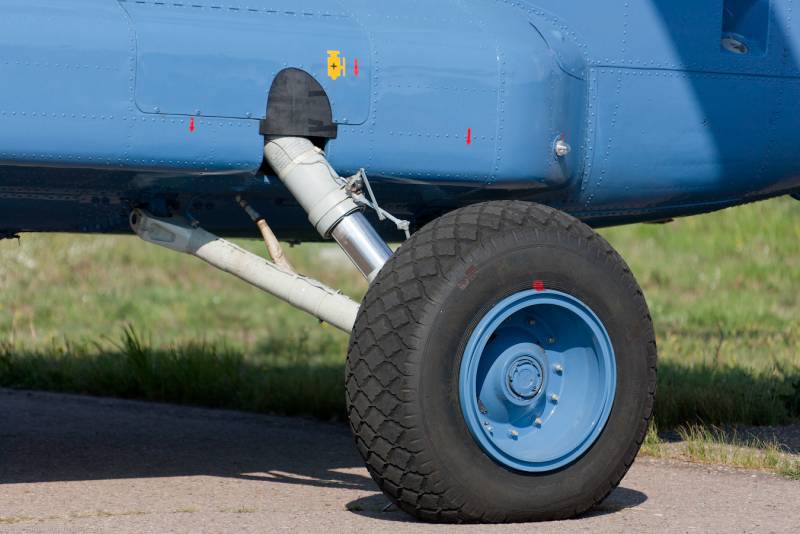 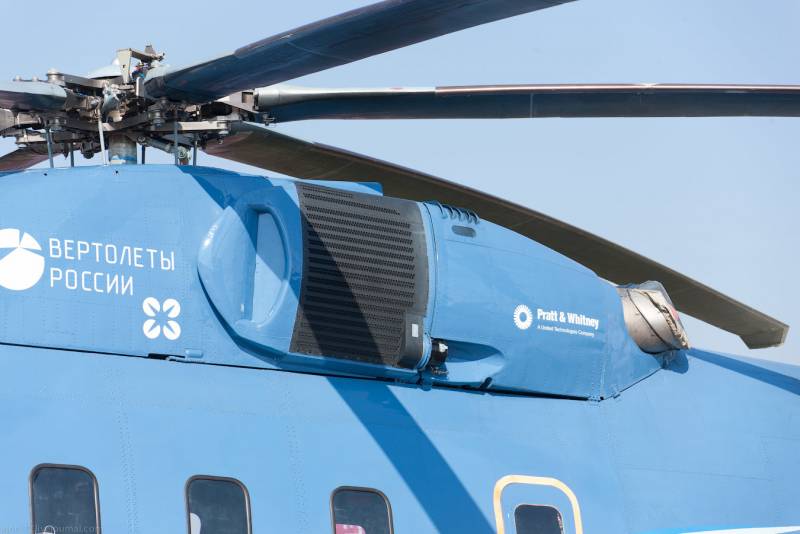 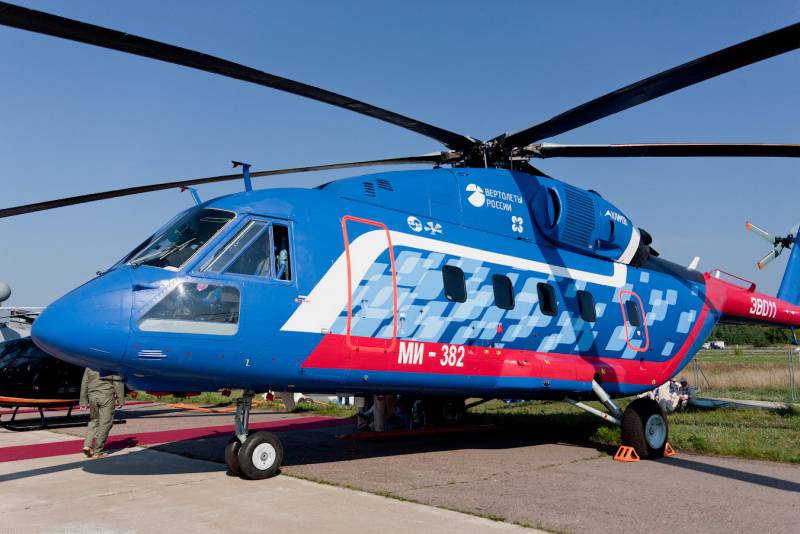 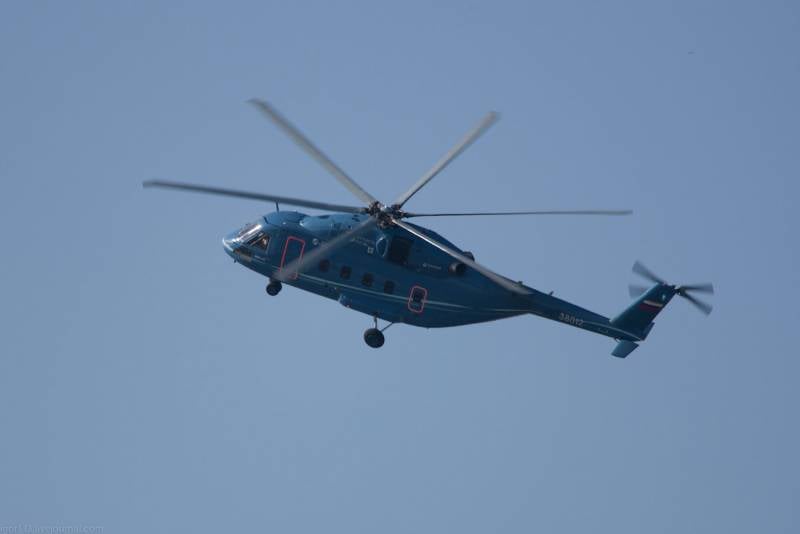 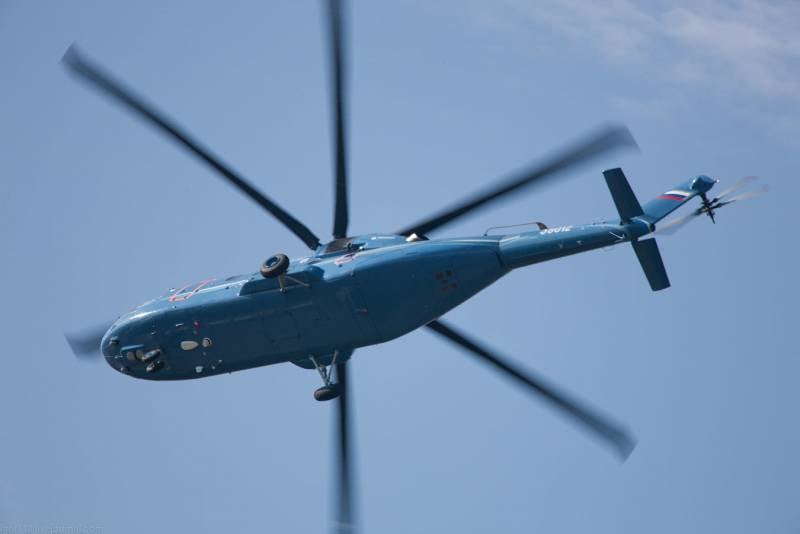 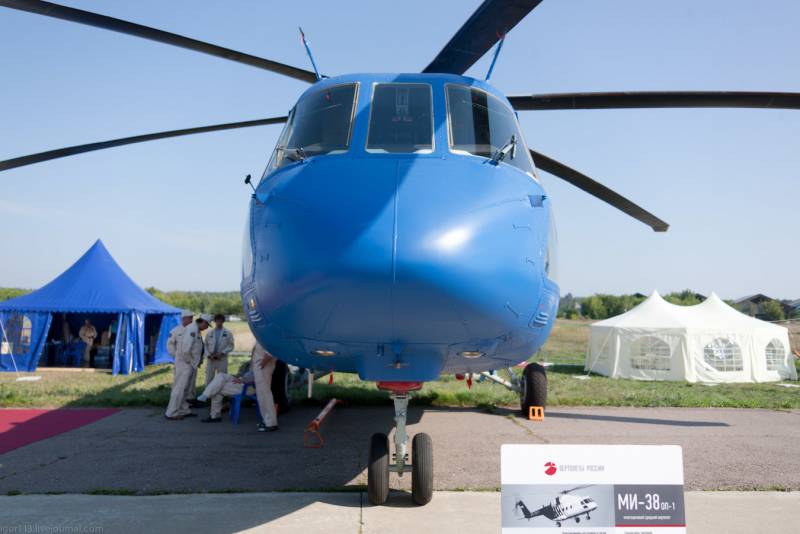 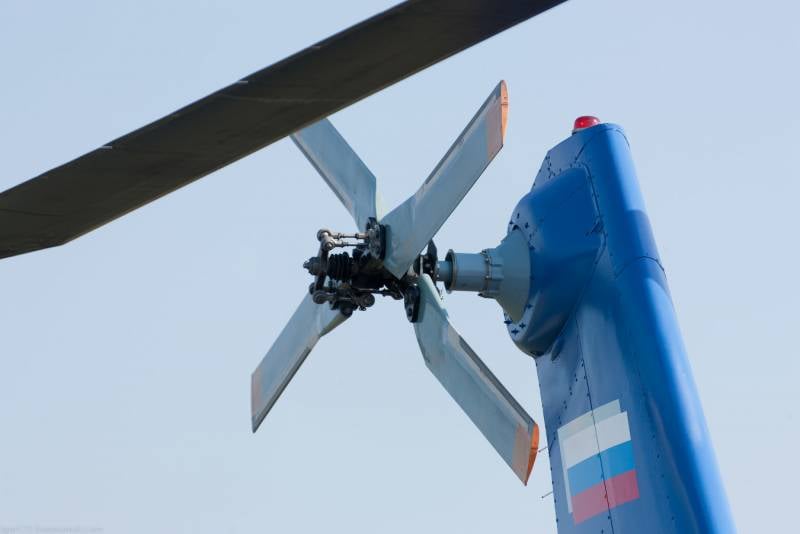 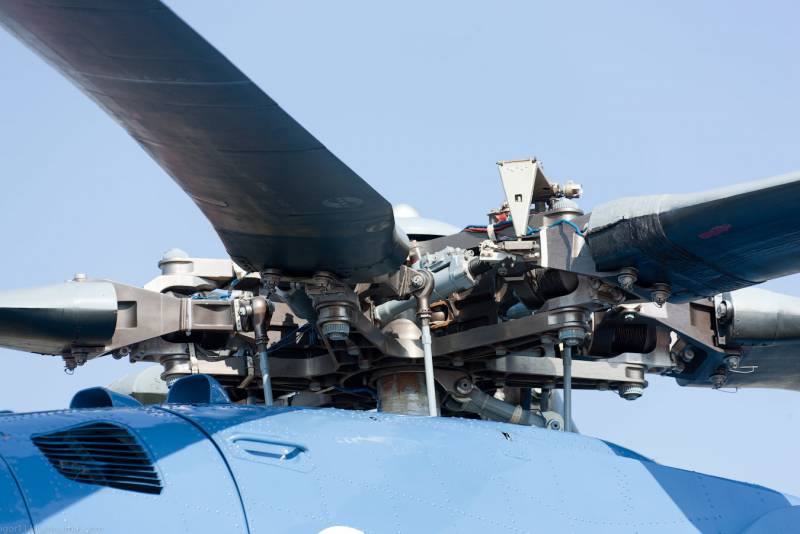 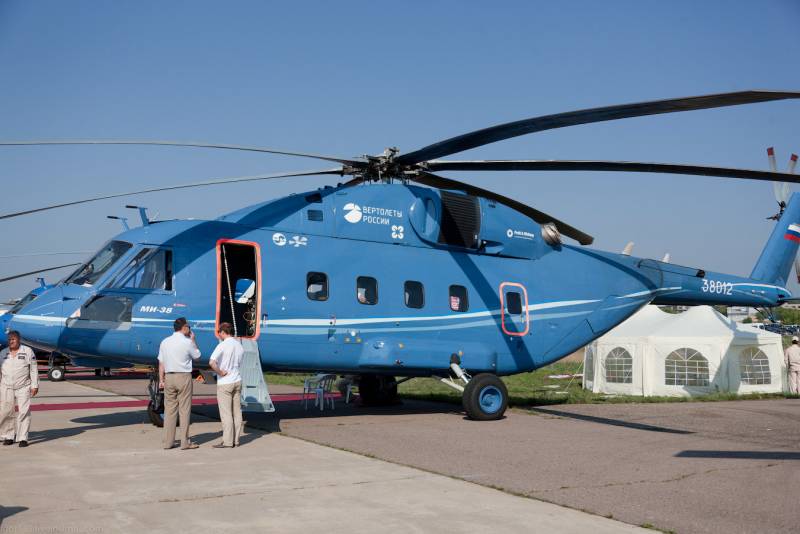 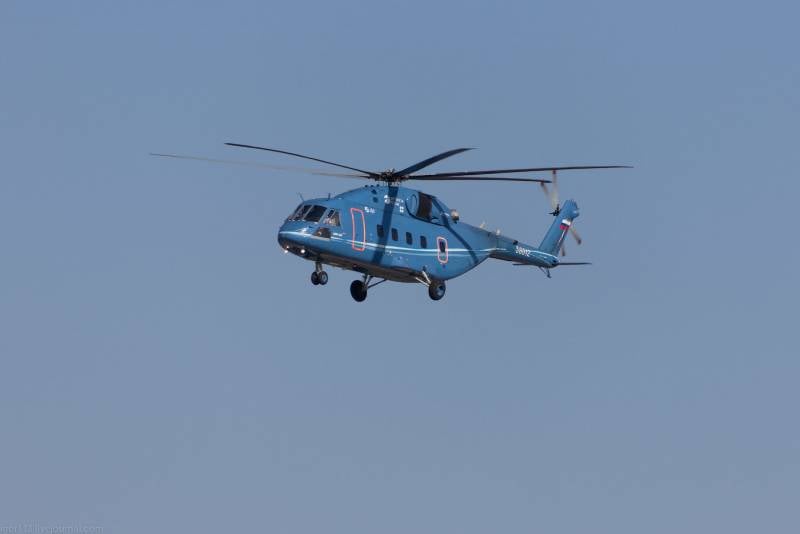 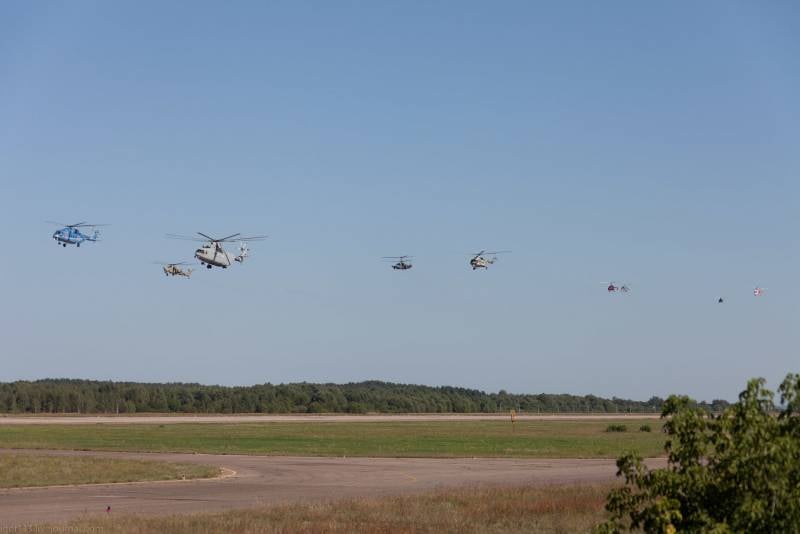 Photo: Igor Kolokolov, igor113.lj.com
Mi-38 in flight and in detail
The reason for the pride of helicopter builders is also the integrated complex of on-board equipment or IBKO-38 from the St. Petersburg Transas group. This avionics provides helicopter flights day and night, as well as in difficult climatic conditions. There are five 12,1-inch TDS-12 multifunction displays in the cockpit for displaying all the required information with a digital map of the area. The built-in GLONASS / GPS works together with the TNG-1G duplicated helicopter computing system, a map server and the TTA-12N early warning system for approaching the ground. The system provides instrumental approach according to the second category of ICAO, automatic flight en route, automatic approach, departure to the second circle, automatic hovering and flight stabilization in all flight modes. The high level of automation of the Mi-38 made it possible to abandon the third crew member - flight engineer, and in a critical situation, the flight can be continued by one pilot. Interestingly, the Mil Design Bureau still offers as an option the placement of a third crew member for ground handling in the event of an autonomous helicopter basing.

The Mi-38 helicopter would not have been a 38st century helicopter without a collimator synthetic vision system on the SVS windshield - this high-tech provides pilots with a “transparent cockpit” mode. They say that the IBKO-8 system is largely unified with the younger model from Mi-17 (XNUMX) and does not require a long adaptation period for pilots. By the way, in parallel with the development of the helicopter, the Transas group was working on a simulator for the new product. Engineers claim that such a practice of simultaneous work in Russia has not been practiced in many places before.

On November 23, 2018, the first flight of the most promising version of the helicopter took place - the Mi-38T transport and assault landing aircraft with a capacity of 40 people with aircraft number 38015. This machine is intended for the military, and at the moment two copies have been delivered to the military aviation. Among the options, factory workers offer the conversion of the helicopter into a sanitary version and the installation of an additional tank that increases the flight range to 1600 kilometers.

The year 2019 for the Mi-38 was marked by certification tests in extremely low temperatures. Test pilots completed 57 flights and 18 ground tests of power plants on the basis of the Mirny airport and the Nakyn site in Yakutia. After such successful experiments at temperatures below minus 45 degrees, the helicopter departed home in the hold of the Ruslan military transport in order to continue testing already on Elbrus. On the mountain peaks, the car showed successful operation at altitudes of up to 3 thousand meters above sea level. 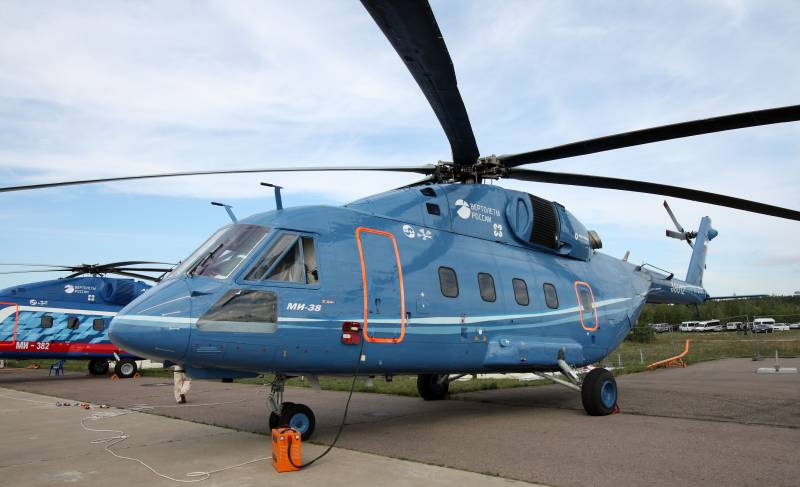 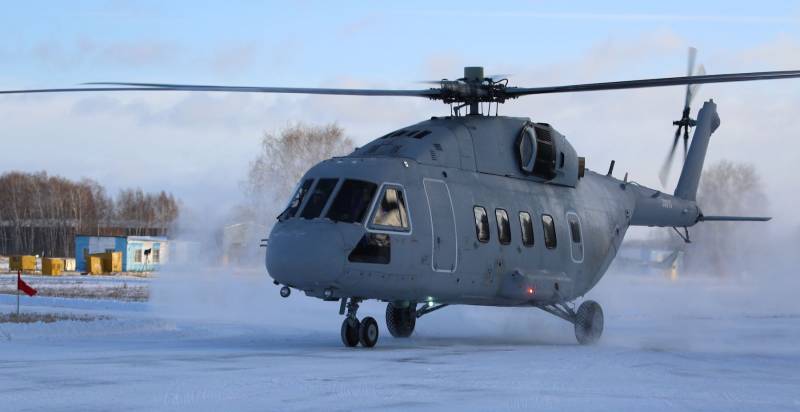 Photo: aviadrive.ru
At the moment, the world and domestic market (in Russia this is 9% of the market in general) of medium-heavy helicopters has already reached its saturation point, and the sales volume of the Mi-38 will be significantly lower than the lighter “best seller” of the Mi-8/17 line. But at the Kazan Helicopter Plant, along with the light Ansat, the main stake is made on a novelty of this class.

In any case, the competitiveness of the classic Mi-8/17 will someday come to an end, and the Mi-38 should partially replace it. Among the foreign analogues, one of the closest competitors is the Airbus Helicopter H225 with a carrying capacity of 5500 kilograms, but its cargo compartment is almost half that of the Russian Mi.

In the meantime, the plant is loaded with defense orders for the Mi-38T version, there is news about the first planned foreign deliveries and great hope for contracts with other law enforcement agencies and government agencies. In accordance with the program “Development of the aviation industry for 2013-2025”, Mi-38 sales are planned for 2025 aircraft by 175, and 2030 helicopters by 264. History will show how optimistic these forecasts were.

We are in Yandex Zen
An-12 in Afghanistan
Prospects for the Russian aircraft engine industry
33 comments
Information
Dear reader, to leave comments on the publication, you must to register.