Needles for food! How to feed the Russian population in the war 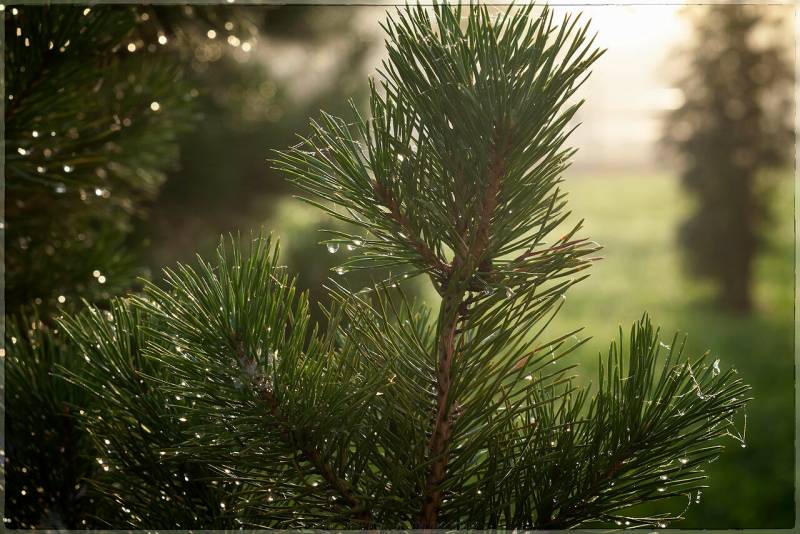 Pine needles. It is simply amazing how much of it is valuable!

Each of us saw pine, spruce, fir needles. For my taste, there is nothing better than drill timber on a high bank above the river, and so that there are only ferns under the pines - a forest of the Carboniferous period. But this is for relaxation, to make a fire, cook porridge and enjoy the long northern twilight and the warmth of fire.

For military purposes, the thickest fir tree is best. It provides excellent shelter from the enemy, even equipped with thermal imagers. Spruce sheltered from the weather, from rain and snow. If you chop off a few lower branches, you get an impromptu tent, dry and comfortable enough to sleep. In the rain or fog on the spruce branches there is enough water, it can be collected and drunk. Elnik is good for ambush and defense. If the enemy decides to comb it, you can hit the line almost point blank.

But now we will consider the military-economic use of needles, which is a very good food and vitamin raw material.

A decoction of pine needles from time immemorial has been used as a vitamin remedy, strengthening strength and preventing scurvy. It is difficult to say when and how the needles discovered this property. In any case, it is known that in the XVII century a decoction of needles is already included in the obligatory set of pasture for Siberian explorers. Cossacks in jails prepared needles and drank decoction, since rye bread (the main food product) was still poor in vitamins, and gardening appeared a bit later.

An easily obtained decoction of pine needles was also used during the war to combat vitamin deficiency. All hospitals prepared needles, boiled them in large tanks and distributed them to the wounded. The broth contributed to faster healing of wounds and recovery from wounds. The wounded used to complain of a sour brew, but its properties were undeniable. A decoction of needles was widely used in the besieged Leningrad, and the partisans, in general, were used very widely. 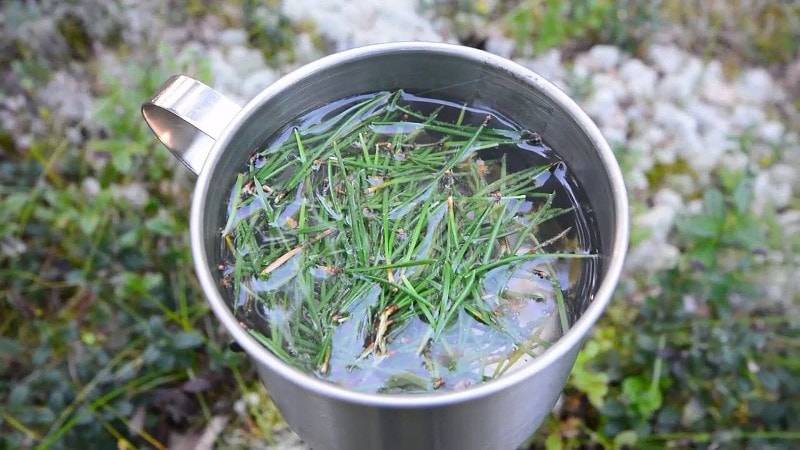 A decoction of pine needles is prepared easily and quickly
One would expect that after the war, research on needles and its use for food will continue, and this product, which is readily available in our conditions, will be included in the set of military-economic measures. But that did not happen. The needles after the war were considered almost exclusively as pharmaceutical raw materials and animal feed. In any case, in a very detailed book by E.D. Levina and S.M. Turnip “Processing green wood", published in 1984, needles are considered in this way.

When reading this book, I had the impression that its authors carefully avoided one of the most interesting points - the rather high content of sugars (glucose, fructose, sucrose in the needles - up to 6,5% of dry weight). The book was published in the series “Industry to the Village”, and I think that the party leadership punished scientists to circumvent this topic so that the glorious workers of the village and forestry would not learn how to drive what was good from the needles of moonshine and would not go too far. The resources of the needles, as calculated by VNIIIPIEIlesprom, were enormous. In the cutting area of ​​the early 1980s, about 25 million tons of needles were collected annually in the RSFSR, of which economically available resources amounted to about 10 million tons. With a humidity of 50% and a sugar content of up to 6,5% (there are some subtleties, which will be discussed below), the sugar reserves in economically accessible needles reached 325 thousand tons, which gives a theoretical yield of 141,2 million liters of absolute alcohol, or 353 million liters of vodka. That would be 11,9% of the production of vodka in the USSR in 1980. These, we note, are resources that, for the most part, were simply thrown into the forest, burned in the cutting areas, completely mismanaged. 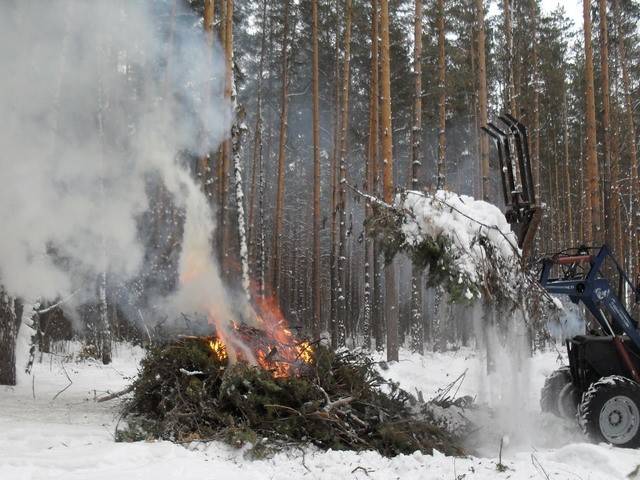 It is simply amazing how mismanaged we are about our resources. In this bonfire, about half a sack of sugar will burn
As for the total amount of needles in Russia, this figure can be calculated approximately. The weight of the needles of coniferous trees is about 100 kg per cubic meter of wood (for spruce 152,5 kg), that is, a pine with a diameter of 30 cm at a height of 20 meters will have a trunk volume of 0,66 cubic meters, and the weight of the needles will be 66 kg. Spruce of the same size will have a trunk volume of 0,68 cubic meters and needles weigh 103 kg. The area of ​​coniferous forests in Russia according to 2015 accounting is 510,5 million hectares. The average number of trees per hectare is 2,5 thousand. Total, it turns out the weight of the needles in the coniferous forests of Russia reaches enormous amounts - 84 billion 232 million tons. It contains up to 2,737 billion tons of sugar.

These are all extremely rough estimates, more expressing the order of numbers than a more or less accurate number. But they also show a huge available resource of food raw materials, which can be useful in wartime.

The subtlety lies in the fact that the sugar content in needles varies greatly by month. The highest sugar content in it is in the winter, in January and February, when the tree stores nutrients for the winter. In summer, on the contrary, its maintenance is minimal. Once I did experiments on fermenting the infusion of pine needles. The infusion, of course, wandered, but not too well. This is not surprising since I used summer needles with a low sugar content. I did not have winter needles.

The needles of winter harvesting should give a good result if you process the chopped needles in two stages: squeezing the juice for subsequent evaporation (to obtain sugar concentrate for fermentation, obtaining alcohol and food yeast) and soaking the squeezed needles in hot water (also for fermentation). One-off concentrated coniferous juice may turn out to be a good sugar-vitamin concentrate, but this still needs to be checked.

Although the authors of the above-mentioned book tried to circumvent the topic of food use of needles, nevertheless, they gave some valuable information. An analysis of the chemical composition showed that summer needles, especially at the beginning of active tree growth, that is, in May-June, contain few sugars, but many proteins with a diverse amino acid composition.

At the Siberian Institute of Technology, a method was proposed for producing protein-vitamin concentrate by hot water extraction while chopping needles. By salting out the aqueous extract, a protein-vitamin concentrate is obtained which contains 55% protein, 12% fiber, 11% fat and 10% water-soluble substances. The yield of concentrate is 80-90 kg per ton of dry raw material. In other words, in the total weight of the needles in the forests of Russia there is a reserve, moreover, constantly updated, about 208 million tons of protein.

The average person consumes about 60 grams of protein per day. About 3,5 million tons of protein products will be enough to feed the entire population of Russia with protein, and for this, it is enough to use 1,6% of the protein reserves contained in needles.

Of course, it is unlikely that coniferous protein-vitamin concentrate will be as good as, say, egg. But in wartime, you do not have to choose. The very possibility of supplementing a protein diet with raw materials, originally non-food, is of great importance. Up to the point that, having learned how to make edible protein from needles, you can already count on how to withstand a protracted total war, even if traditional animal husbandry and plant growing are plunged into a strong crisis. And in a nuclear war, in which many valuable arable and pasture lands can be highly radioactively contaminated and permanently taken out of use, this method of obtaining food protein can be saving. Remote forest areas in which there are no important military and economic facilities and which are most likely not to be exposed to nuclear attacks or significant radioactive contamination can become sources of food protein. The choice between the options: starve to death, dig up radioactive wheat or pork or coniferous protein concentrate, is still quite obvious. In addition, it seems that it is possible to develop a technology for purification of coniferous protein from undesirable impurities. 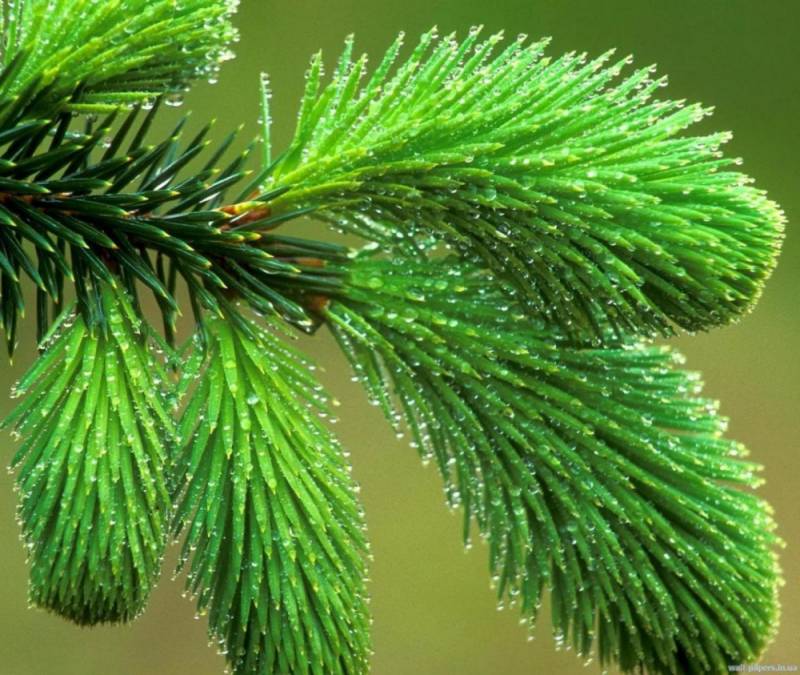 Young shoots of needles containing a lot of protein and starch

It should also be added that fresh coniferous shoots contain a lot of starch, up to 25-30% of the weight of young shoots in July. Getting starch is also not so difficult. The young shoots crushed into a paste are treated with cold water, filtered through a fabric filter, and then washed several times to obtain pure starch.

And after all this, the remaining mass of needles is still suitable for further processing, for example, for the hydrolysis of cellulose (needles contain about 32% polysaccharides that are easily hydrolyzed), for the extraction of chlorophyll-carotene paste, coniferous wax, and essential oils. It can also be used as feed for animals and birds, and so on.

In general, if the possibilities of agriculture sharply decreased during the war, which usually happens, but there are vast coniferous forests, then you can start processing the needles for food.

We are in Yandex Zen
Commentary on A. Petrov's interview “Fire and Tactics in the Russian Army: Another Look”
What you didn't want to know about England
201 comment
Information
Dear reader, to leave comments on the publication, you must to register.