Erdogan on the offensive: signs of a revival of the Ottoman Empire 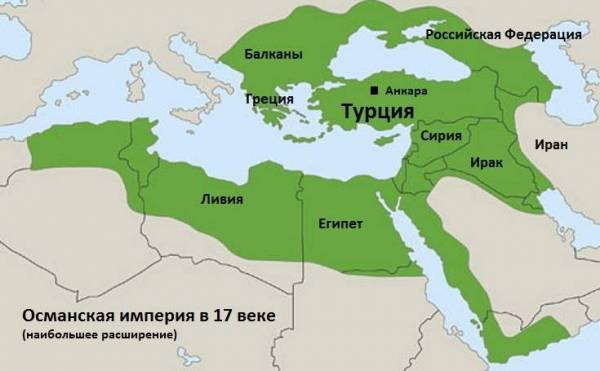 Turkey created its buffer zone in Syria, forms an army of pro-Turkish militants, sent troops to Libya. Erdogan argues with Trump, is rude to Germany and France, accuses Israel of terrorism and compares it with the Third Reich. Erdogan sets the conditions for Russia. In fact, we see the revival of the Ottoman Empire, the creation of the "red caliphate" of the new Sultan Erdogan.

After the destruction of the Soviet Union, Turkey gradually began to build a new military-political and economic policy in the regions that were formerly part of the fallen Ottoman Empire. In the Balkans, the Middle East and the Caucasus. This process was especially noticeable under Recep Erdogan (the head of the Turkish government since 2003 and the president of the state since 2014).

Turkey intervened in the war in Iraq and Syria, which was connected both with the Kurdish issue threatening the security of the Republic of Turkey and with economic interests. In addition, Ankara began to actively intervene in the affairs of Iraq and Syria, since as they were destroyed and their military-economic power grew, they began to believe that these countries were included in its sphere of influence as former parts of the Ottoman Empire. The Turks themselves and with the help of pro-Turkish gangs occupied a part of Syria, creating their own army and a new Syria there, fully oriented to Ankara. Now Ankara is transferring its militants, whom it supports with regular forces, to Libya. There Erdogan, together with Qatar, relies on the Government of National Accord, led by Saraj in Tripoli.

In Turkey itself, under Erdogan’s rule, a course towards the Islamization of society is clearly visible. At universities, former centers of democracy and freedom, mosques are being built. The ban on wearing the hijab in public places has been lifted. The conservative “village” is increasingly putting pressure on large cities where pro-Western secular ethics have dominated for a long time. The number of schools for imams is growing. Formally, Turkey is still a secular state, but in general, the main course on the Islamization of society and the country is visible to the naked eye.

Erdogan himself does not act as a democratically elected president, but as a caliph and sultan - the head of the Muslim and Turkic world. New Turkey - the "red caliphate", is positioned as the center of the Islamic and Turkic world, and Erdogan - as the head of all Muslims. Ankara claims to be the leader of the "Turkic European Union" (Turan), trying to unite the Turkic states around itself - Azerbaijan, Turkmenistan, Uzbekistan, Kyrgyzstan and Kazakhstan. Turkey has its own interests in Crimea, Tatarstan and Bashkiria. In 2009, the Turkic Council was established with headquarters in Istanbul.

Having decided that Russia is creeping into its sphere of influence, Ankara allowed itself to go into a frank conflict by shooting down a Russian military plane. Erdogan allows himself injections in the direction of the United States. For example, on the issue of US policy in the Middle East or the supply of F-35 fighters. The Turkish president calls Israel a terrorist state and even compares it with Nazi Germany, and it gets away with it. The Red Sultan threatens the European Union by blackmailing European capitals with hordes of refugees whom they are threatening to release from the camps and let them into “fertile” Europe. Erdogan criticizes Merkel and is rude to Macron (on the issue of Cyprus and Libya).

Ankara sent a landing fleet to the shores of Libya, and Paris, having accused Turkey of increasing regional tension, is strengthening its military alliance with Athens and is planning to send ships to the eastern part of the Mediterranean Sea to support Greece in a dispute with Turkey. The tension between Turkey and Greece, Cyprus has increased significantly. Relations between Turkey and Greece are traditionally hostile, despite the fact that both countries are members of NATO. In 1974, Turkish troops landed in Cyprus, captured part of the island and created the Turkish Republic of Northern Cyprus, recognized only by Ankara. A new round of conflict between Ankara and Athens is caused by a dispute over the ownership of energy resources in the Eastern Mediterranean.

Turkey's participation in the gas war

Ankara quite successfully thwarted Moscow's plans in Syria. The “Turkish stream” was reduced from 4 to 2 threads, while Erdogan received a trump card in the case of blackmailing Moscow. Ankara also significantly cut purchases of Russian gas, but increased purchases from other sources. In 2019, Ankara opened the Trans-Anatolian Gas Pipeline (TANAP) - a gas pipeline from Azerbaijan through Georgia and Turkey to the Greek border. Further, the Turks plan to commission the Trans-Caspian gas pipeline, which will connect Azerbaijan and Turkmenistan, it is possible that Kazakhstan. That is, Turkey is turning into a major gas hub.

Now Ankara breaks into the war in Libya, which also has energy prerequisites. Turkey, in alliance with Qatar, through the Sarajah government in Tripoli, seeks to gain control of the Libyan maritime zone in order to threaten a promising gas pipeline to Europe from large fields in the Eastern Mediterranean. The zones are interconnected, which allows Ankara to dictate the conditions for the construction of the pipe. Turkey and Qatar are opposed by another “gas” coalition - Saudi Arabia, Israel, Egypt, Sudan and Russia, which are fighting at the hands of the army of Marshal Haftar. The interests of France, the Republic of Cyprus and Greece adjoin them. That is, Libya has become a battlefield for serious players.

We are in Yandex Zen
Prospects for intervention in Syria. Turks and Saudis are preparing for war or bluffing?
The attack on the Russian aircraft and the political situation in Turkey
70 comments
Information
Dear reader, to leave comments on the publication, you must to register.