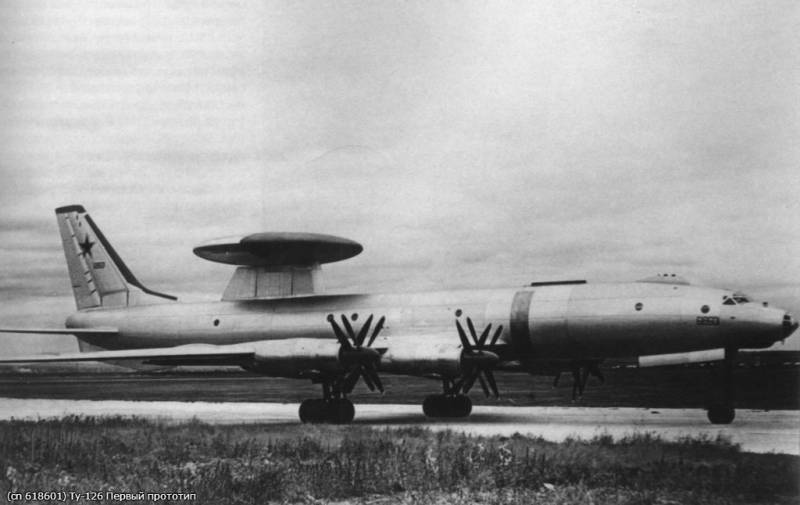 Experienced Tu-126 in trials. Only this car carried a number on board. Photo Aviahistory.ucoz.ru

In the fifties of the last century, the issue of building an air defense system capable of covering all the borders of our country was of particular importance. In most areas, ground-based radar stations were deployed, but in the Arctic and in some other areas their use was not practical. As a result of this, in 1958, the development of the first domestic long-range radar detection aircraft, the future Tu-126, began.

The development of new types of equipment was carried out as part of a general program to improve air defense. To cover the northern borders, it was decided to create two new models aviation technicians - AWACS aircraft and long-range interceptor. The development of two projects was set by the resolution of the Council of Ministers No. 608-293 of July 4, 1958. The main contractor for both orders was OKB-156 A.N. Tupolev. 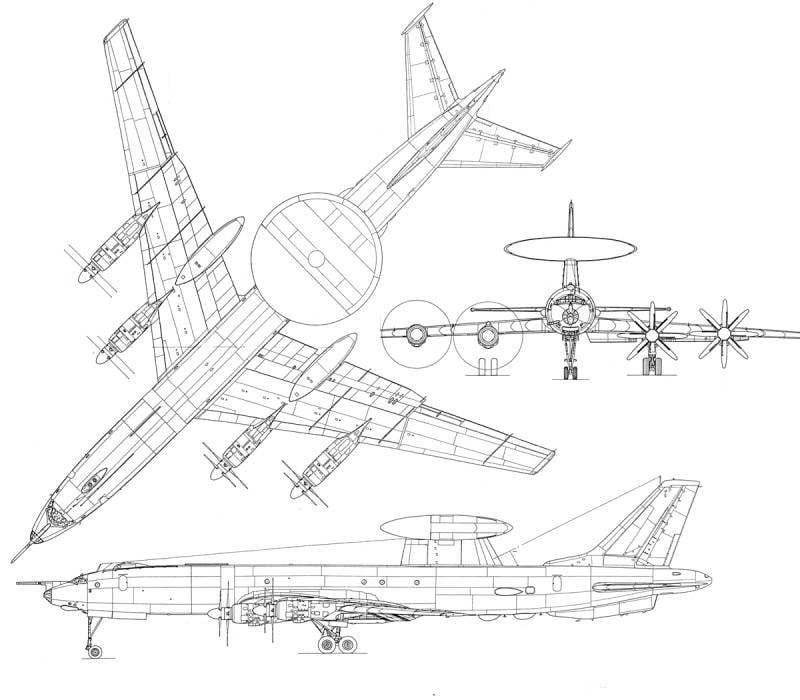 Scheme of a production aircraft. Figure Airwar.ru
The customer wanted to get an AWACS aircraft based on the Tu-95 long-range bomber with the appropriate range and flight duration. It should have installed a radar capable of detecting fighters at ranges of at least 100 km and bombers - at least 300 km. The complex of the AWACS aircraft and the interceptor should have been presented for testing in 1961.

By the end of the year, OKB-156 examined the available opportunities and took the initiative. It turned out that the Tu-95 bomber is not the most successful platform for the AWACS aircraft. Limited fuselage volumes did not allow optimal placement of equipment and people. An alternative version of the preliminary design based on the Tu-114 passenger plane was worked out, into the airframe of which it was possible to enter equipment, jobs and even a compartment for the rest of the crew and operators. At the same time, the characteristics remained at the right level.

Tu-126 at the airport. Photo Airwar.ru
At the end of 1958, the terms of reference were changed taking into account such proposals. Soon, the Air Force and Air Defense approved a revised version of the TTT, and work continued. Outline design of the aircraft itself and the radar system for him was carried out until the beginning of 1960. Then the customer approved the proposed look, and the project moved to a new stage.

In the design process

The aircraft with the working code "L" was based on the finished design, but had a lot of noticeable differences. First of all, we modified the glider and re-arranged the former passenger cabin. Now these volumes were intended for special equipment and operators. The power plant remained the same, but the fuel system was supplemented with a bar for refueling in flight. The complex of electronic equipment was rebuilt according to military standards. A large pylon appeared on the fuselage for mounting an antenna device and a fairing.

Radar fairing close-up. Photo Airwar.ru
The passenger compartment was divided by partitions into several compartments. Behind the cabin was a compartment with operator seats, computers, and part of the Liana radar equipment. Behind it was a backup compartment for additional equipment. The third compartment accommodated the gun operator’s position. In the fourth compartment there were places for the crew to rest. The fifth and sixth were intended for avionics equipment. Other components and assemblies were placed on the lower deck.

The main component of the onboard equipment of the L aircraft was the Liana radar developed by the NII-17 GKRE (now the Vega concern). Its antenna device was placed inside the outer fairing with a diameter of 11 m and a height of 2 m. The fairing with the antenna was mounted on a pylon above the fuselage and rotated around a vertical axis, providing a circular view. This antenna design for aircraft radar was used for the first time in domestic practice.

According to the project, Liana could detect air targets at distances of up to 350 km, depending on their type and size. Large surface targets - from 400 km. Operators on board the aircraft could monitor the air and surface conditions, identify targets and determine their coordinates. Information about the situation via telecode communication was transmitted to the air defense command post. Communication devices provided data transmission over a distance of 2000 km. 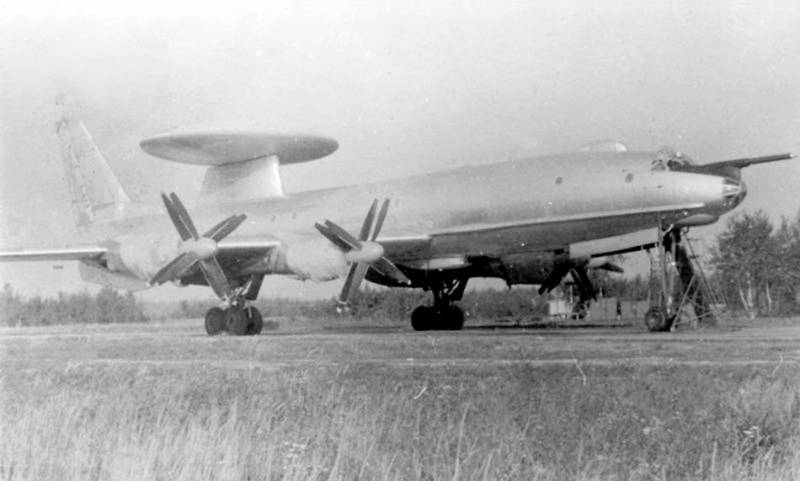 There were no visible side numbers on serial aircraft. Photo Airwar.ru
The flight crew of the future Tu-126 consisted of six people. In the first compartment there were six operator places. Six more operators were located in the household compartment and could change their comrades, increasing the time of patrolling.

At the end of 1960, the customer considered the proposed project and introduced new proposals. They touched on issues of on-board equipment and platform, combat capabilities, etc. In particular, it was necessary to increase the working radius of the complex, as well as to ensure the possibility of detecting targets by their own radio emission - for this, it was necessary to equip the aircraft with a radio intelligence system. The rest of the project "L" the customer arranged.

By that time, the project participants had already implemented Council of Ministers decision No. 567-230 of May 30, 1960. It required the construction of an experimental aircraft, the manufacture of equipment for it, and the preparation of several products for additional ground tests. The assembly of the Tu-126 was entrusted to the Kuibyshev plant No. 18 (now Aviakor). 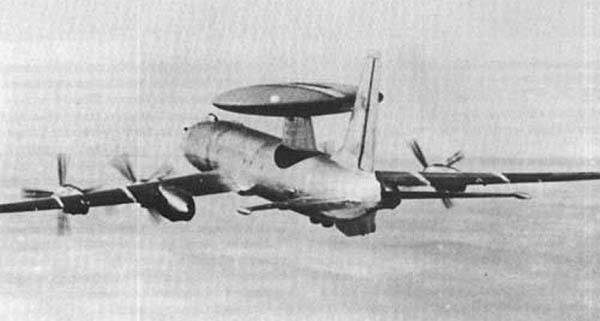 Tu-126 in flight. Photo Airwar.ru
At the very beginning of 1962, the experimental Tu-126 was put to the test. At that time, instead of the Liana radar, he was carrying weight simulators. January 23 crew I.M. Sukhomlina completed the first flight. After several flights from the factory airfield, the aircraft was flown to Lukhovitsy, where it was equipped with Liana and put to joint tests. The first stage of these events lasted until February 1964. The Tu-126 was based on a serial proven platform, and therefore the bulk of the flights took place with the aim of testing electronic systems. Testing and debugging of avionics turned out to be quite complicated, but specialists from several enterprises together coped with them.

The second stage of joint testing started in February 1964. This time it was required to determine all the flight technical characteristics, avionics parameters and work out the issues of combat operation of the AWACS aircraft. Events of this kind continued until November and were successful. In December, the newest Tu-126 was recommended for adoption. 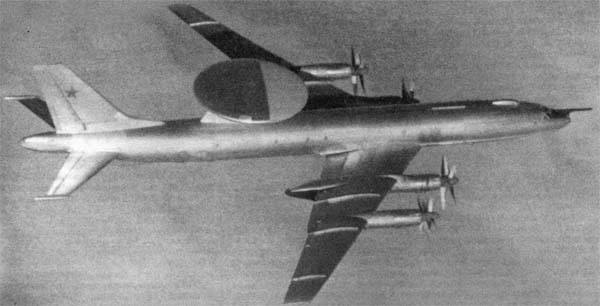 The mushroom-shaped fairing affected aerodynamics, but allowed to obtain sufficient LTX. Photo Airwar.ru
During the tests, “L” / Tu-126 confirmed all the main performance characteristics. He could pinpoint various targets at given ranges and transmit data to the CP. At the same time, the installation of heavy and large equipment negatively affected flight performance. Compared to the base Tu-114, speed and maneuverability have fallen. However, in general, the aircraft arranged for the customer.

Even before the completion of the first test phase, in November 1963, the construction of the first production Tu-18 was started at plant No. 126. In the spring of 1965 - just a few months after the end of testing the first prototype - the production car was handed over to the customer. Soon they completed and tested a second car.

Production of the Tu-126 continued until 1967, inclusive. In 1966 and 1967 the army transferred three aircraft each, after which their construction was completed. Eight production AWACS aircraft had small differences in the design and composition of the equipment. In particular, not all cars received active interference stations SPS-100 Reseda to counter the enemy. 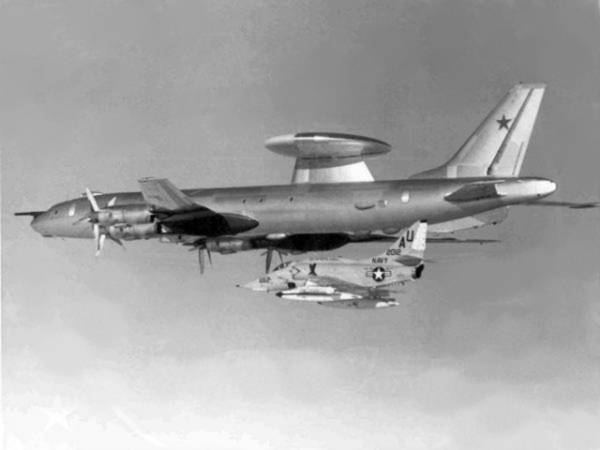 Tu-126 accompanied by a U.S. Navy aircraft, 1973. Photo by US Navy
The first two aircraft went to the base of Monchegorsk (Murmansk region) in May 1966. There they were included in the newly created 67th separate Squadron of AWACS, reporting directly to the command of the air defense forces. Then the squadron was transferred to the Šiauliai airfield (Lithuanian SSR). Soon, the composition of the unit expanded. It included the remaining production cars. Eight aircraft were divided into two squads. Also, the 67th squadron received an experimental Tu-126, but it remained with the staff.

In order to maintain secrecy, the Tu-126 aircraft carried only identification marks of the USSR Air Force. Board numbers on them were absent, which did not allow the probable enemy to determine even the approximate number of aircraft in service. The exception was only an experienced aircraft, on the nose of which there was a serial number.

Tu-126 aircraft were designed to solve several problems. They were responsible for radar and radio reconnaissance in the Baltic, Barents and Kara Seas, right up to Novaya Zemlya, and also for providing guidance for Tu-128 interceptors. In addition, the Tu-126 initially carried out the search for surface targets, but later this work was transferred to other aircraft.

Another snapshot from the US Navy archives
The 67th separate AWACS squadron did not carry constant duty. The Tu-126 flights were carried out in accordance with the orders of the command - both in the interests of air defense, and at the request of the Northern or Baltic fleet. Aircraft operated from Šiauliai airfield; The deer base on the Kola Peninsula was used as the operational one. The crews worked independently and together with the Tu-128 interceptors.

According to the reviews of the flight and technical staff, the Tu-126 had both important advantages and serious disadvantages. The main advantages of these machines were their availability and special features. With the help of AWACS aircraft, the Soviet Army could track the enemy’s activity in hard-to-reach areas and take measures in time. The performance characteristics of the aircraft were at the right level and ensured efficient operation. 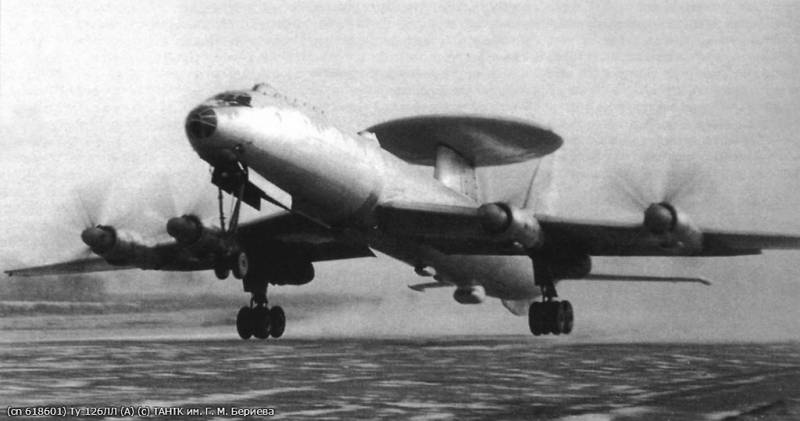 Experienced Tu-126 in the form of a flying laboratory. Photo Aviahistory.ucoz.ru
At the same time, the Tu-126 was not easy to operate. The electronic complex included lamp equipment with the appropriate dimensions, weight and specifics of service. They also criticized the poor ergonomics of the inhabited compartments. Noise isolation could not cope with the sound of engines, and some of the noise sources were inside the aircraft. Radiation protection was also inadequate. All this led to increased crew fatigue, which could affect work efficiency.

However, the pilots and operators suffered all the inconvenience and served. Flights on different routes were carried out regularly, various targets were identified and appropriate measures were taken. The resilience of the crews allowed the army to maintain control over remote areas and made a significant contribution to the country's defense.

The operation of Tu-126 AWACS aircraft continued until the mid-eighties. In the two decades that have passed since the adoption, eight machines managed to become obsolete morally and physically - they needed a replacement. Work in this direction started in the mid-seventies and could not do without the participation of Tu-126. 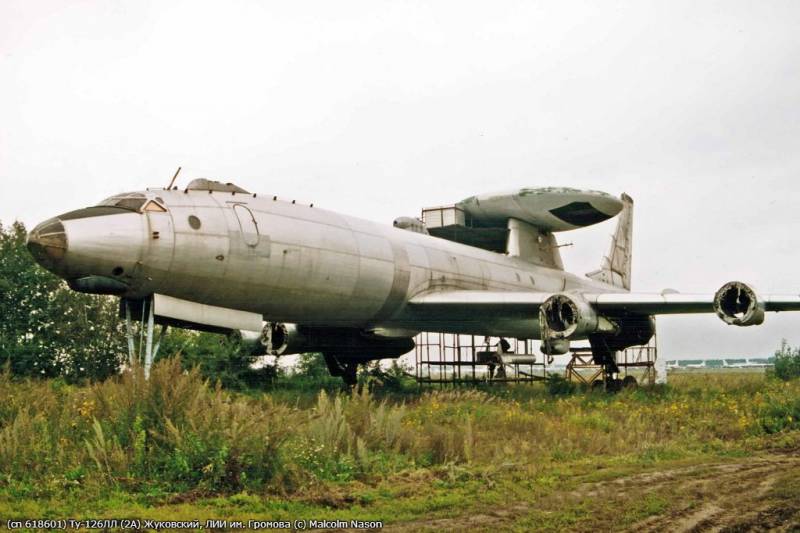 Flying laboratory shortly before disassembly. Photo Aviahistory.ucoz.ru
In 1977, tests began on a flying laboratory Tu-126LL (A), made on the basis of an experimental aircraft. After checking on this platform, the instruments were transferred to the modern military transport aircraft Il-76. The resulting sample received an A-50 index. The production and receipt of the A-50 in the troops allowed the obsolete Tu-126 to be decommissioned.

The decommissioned aircraft remained in storage without any clear prospects. In the early nineties they began to be disposed of. By the middle of the decade, this process was completed. Unfortunately, not a single Tu-126 has been preserved - but the most important direction has been developed, and the army saves funds for the early detection of potentially dangerous objects.

We are in Yandex Zen
TU-95. Target America (part of 1)
An-12 in Afghanistan
22 comments
Information
Dear reader, to leave comments on the publication, you must to register.