The cleanup of governors continues: for which Putin fired the head of Chuvashia 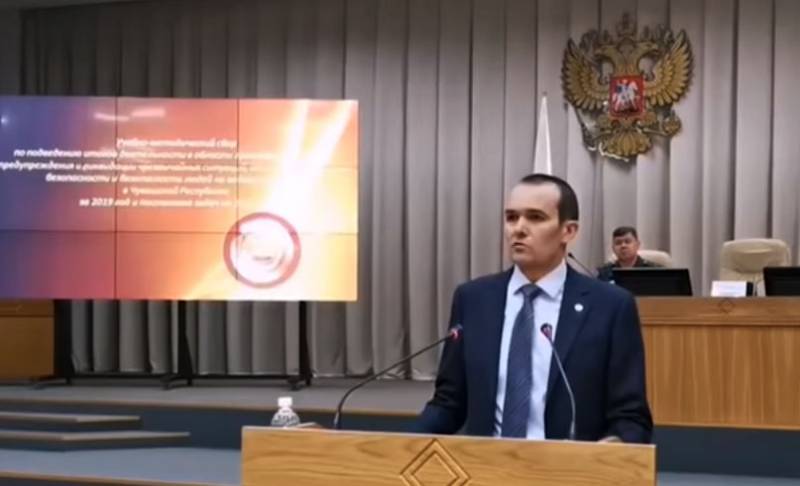 
The governor was dismissed with a very unpleasant wording "for the loss of confidence."

Usually, regional leaders are dismissed for lack of confidence in respect of whom criminal cases are brought. True, Ignatiev did not become a defendant, but there is no doubt that he seriously violated the head of state.

Ignatiev was the governor of an eccentric and self-confident, often behaving sharply even by the standards of other representatives of the Russian elite. Nevertheless, at the head of Chuvashia Ignatiev lasted almost 10 years - from August 29, 2010. However, his position was constantly undermined by corruption scandals, often covered by the Russian media, plus the manager’s behavior was not always adequate.

The reason for the tough reaction of the authorities was Ignatiev’s act on January 23, 2020 at the presentation of the keys to a new fire truck. Ignatiev made the Emergencies Ministry bounce for the keys. Earlier, Ignatiev called for the “wetting” of journalists and bloggers who speak out in opposition to the authorities.

After that, the Federal Minister for Emergencies, Yevgeny Zinichev, called the behavior of the governor unethical, and the State Secretary of the Ethics Commission "United Russia" State Duma deputy Yevgeny Revenko was extremely cruel in his estimates:

Moral ugliness. The head of Chuvashia, Mikhail Ignatiev, once again broke the bottom.
On January 28, Mikhail Ignatiev was expelled from the United Russia party, and on January 29, the president removed him from his post. Putin, the security official himself, is very tough on such humiliation of law enforcement officers. Ignatiev’s behavior, which forced the senior internal service officer to jump behind the keys, could well put an end to the president’s doubts about the future of the head of Chuvashia.

By the way, Mikhail Ignatyev is not the first governor recently dismissed by Putin. The governors of the Kirov region Nikolay Belykh, Sakhalin region Alexander Khoroshavin, the Komi Republic Vyacheslav Gaiser, the Bryansk region Nikolai Denin went to the dock after dismissal with the phrase "loss of confidence" and then to the prison. The head of the Nenets Autonomous Okrug, Aleksey Barinov, was sentenced to probation and released in the courtroom, and after three years of investigation, the corpse of the Amur Region Leonid Korotkov did not find the corpus delicti and the criminal case was closed against him.

For a person from the executive branch, dismissal following a loss of confidence is a “wolf ticket”. They won’t take him to state structures, 90% of former colleagues on the workshop would immediately stop answering the phone calls of the disgraced ex-official, so as not to lose confidence themselves. The way out is either business, or social activity, or simply the life of a pensioner. which was led, for example, by the recently deceased ex-mayor of Moscow, Yuri Luzhkov.

Now many experts are analyzing whether a new sweep of the governor’s corps will follow the resignation of Mikhail Ignatyev. Indeed, in some regions of the Russian Federation, it is high time to send to rest regional leaders to whom there are numerous questions, including those related to the fulfillment of presidential instructions. However, while the Chuvash история It looks more like an internal problem of the republic. It’s just that its leader managed to get the federal leadership out of himself, although, admittedly, he tried hard for a long time. To call Dmitry Anatolyevich Medvedev live “Vasily Petrovich” is aerobatics!

It’s another matter that a struggle can develop just for successful and rich regions, in which there have always been many applicants for power. Large financial flows are spinning there, there are serious growth opportunities.

One of these regions is the Rostov region. Governor Vasily Golubev so far manages to keep the steering wheel of the regional leadership, but every year it becomes more difficult. Permanent high-profile arrests of high-ranking leaders are worthwhile: for example, both heads of the local Federal Penitentiary Service ended their careers with arrest, and criminal proceedings were instituted against the head of the regional Ministry of Health, Tatyana Bykovskaya.

The leader of the neighboring Krasnodar Territory, Veniamin Kondratyev, is not easy - the region is even richer there, huge investments are being made in it: Sochi, the Novorossiysk port, and huge agricultural land. But Kondratiev is holding power tightly in his hands.

We are in Yandex Zen
Situational analysis of the death of the MH17 flight (Malaysian Boeing 777), made on the basis of engineering analysis from 15.08.2014
Results of the week. “In our cooperative, the board is always agreed”
64 comments
Information
Dear reader, to leave comments on the publication, you must to register.