India bought howitzers from the USA, but dissatisfied with quality 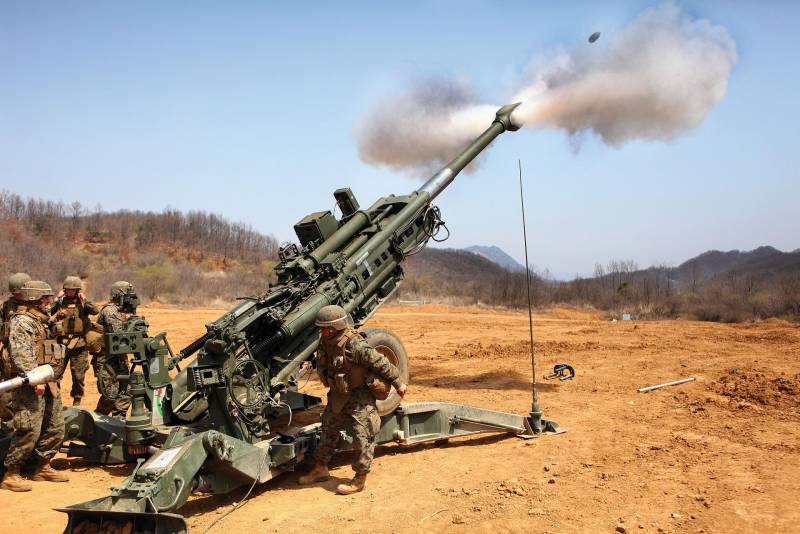 Military-technical cooperation (MTC) with India has always been a complex and controversial thing. Indian generals and politicians are turning most arms and military equipment deals into a rare booth. The characteristic features of this booth are endless tenders, which are postponed, then announced again, then various corruption details are clarified, some persons involved in the Indian side, for example, generals, are removed from their posts, put on trial (or not), conditions, terms and so on change Further. Often this happens during political changes in the country: the government that has come to power also wants its own piece of cake of kickbacks from suppliers. All this is served with a healthy sauce of "access to various advanced technologies" or "diversification of suppliers." Do not forget about the compulsory licensed assembly of many purchased samples in India, which often also becomes a booth when the industry is not able to master the technology and is engaged in the assembly of car kits, calling it production. Diversification itself, of course, is not so bad - a powerful military power, of course, cannot depend on any one supply, be it Russia or, say, the United States.

Indians have purchased a lot from the United States in recent years (including for corruption reasons outlined above) weapons at just furious prices sometimes, but the quality and technological level of these weapons are often seriously inferior to its price tag and competitors. A striking example of such a deal is the contract for the supply of 145 155-mm 39-gauge towed howitzers M777A2. India traditionally turns its 155-mm artillery park into a rare zoo with a bunch of systems from different countries. Equipped with, for example, Swedish towed (self-propelled) Bofors howitzers and a number of completely outdated systems, they also purchase South Korean self-propelled guns 155 mm / 52 cal. K9 Vajra-T, which is an adapted version of the K9 Thunder self-propelled guns (they preferred it to our 155mm Msta-S 2S19M1-155 self-propelled guns, which, objectively, will be better in a number of ways), but they are also developing their own on this topic.

At the same time, they still developed, tested and adopted the products of the "domestic" manufacturer DRDO - the 155-mm 52-caliber towed ATAGS system weighing as many as 18 (!!!) tons, that is, in general, this system will weigh together with the tractor almost like a tracked self-propelled guns and heavier than many wheeled self-propelled guns, without the advantages of self-propelled guns. For comparison: the domestic 152-mm howitzer 2A65 Msta-B, one of the main heroines of the Russian military participation in the war in Syria, weighs 7,1 tons, and the American M198 - 7,3 tons.

But back in 2006, India announced its desire to buy also a light 155-mm artillery system and as a result, instead of the Singapore howitzer, which was preferred at first, stopped at the BAE’s M777A2 howitzer, which weighs a little more than 4 tons. True, you have to pay for this lightness of the 39-caliber artillery system - the cost of a howitzer is extremely high, because titanium alloys are used, and not only therefore. You must also pay for ease of use, and many others. But the Indians really needed a six-inch artillery system, which could be transferred by helicopter on an external sling, and in the mountains - they needed them in the high-mountainous areas of the border with China and Pakistan too. Under these howitzers, a tender was announced for heavy military transport helicopters, which the American Chinook won (supposedly due to better altitude compared to the Mi-26T, which could carry it away).

The signing of the contract was constantly delayed. Either because of corruption scandals, or because of attempts by BAE to cheat on the offset part of the transaction, that is, to reinvest in the economy of the buyer country in one way or another. There is an offset part in almost any transaction on military-technical cooperation, unless absolutely “non-slave” countries like Poland and Ukraine do without it. In a deal with howitzers, the offset was 30% of the amount and had to be performed by BAE within 4 years. The company was trying to extend the term to 6 years and reduce the percentage, and the deal almost fell through. The price tag for howitzers also grew steadily and grew from $ 493 million to $ 885 million, that is, the howitzer has doubled in price, and the price tag is quite comparable to the modern one a tank or self-propelled guns. Moreover, the T-90MS or even the T-14 would be cheaper ...

In the end, the contract was signed only in 2016, according to it the first 20 howitzers should come from the United States, the rest should be assembled in India within 54 months. But the execution of the order was delayed - it began not six months after the signing of the contract, but already after 2 years, and the pace is still breaking down.

And the other day, Indian sources reported problems with the quality of the advertised expensive "three hatchets", as this art system is often called with us. During the Indian field trials of the first two M777A2 howitzers delivered at an army training ground in Pokran, one of the two recently purchased M777 howitzers reportedly collapsed, was torn apart, and it was only due to safety measures that no one was hurt. Apparently, they fired from overseas equipment, as they say, “from the rope” and from cover, and they did it right. This failure was recognized by BAE. Given that these howitzers are designed to be deployed on the Chinese highland border and cannot be replaced, their insecurity is likely to jeopardize India's capabilities in the region.

According to the Indian Army’s leaked media reports, the insufficient efficiency of the M777A2 howitzers was “completely predictable,” and the howitzers did not meet the technical requirements for a number of critical characteristics during previous field trials. According to the sources of the Hindustan Times, the Indian Armed Forces reported that the M777A2 did not work well, for example, with direct fire, and they fulfilled the key requirements for air mobility with problems. But they were taken precisely for this! There were also serious shortcomings in the resource of the barrel, in the minimum firing range and a number of others.

Moreover, the unreliability of the “three hatchets” has not been a secret for a long time. The American army loves this artillery system only because the M198 is worse, in their opinion, and the self-propelled guns "Paladin" M109A6, even the Americans don’t really call a good language. And cases with ruptured trunks of the M777 have accumulated enough. Moreover, they, in general, were not usually associated with sloppiness of calculations (as it usually happens), for example, for a long time that did not clean the gun’s bore or allowed, say, pebbles or soil to enter the bore and did not remove it before firing. So, in February 2014 at Fort Bragg, one GI was killed and two more were seriously injured when the M777 barrel was torn apart during firing. A month later, three Australians (M777, except the United States, where about 1000 of these systems are still in Australia and Canada, where there are dozens of them) were seriously injured during the shooting. Moreover, in Fort Bragg the M777 exploded earlier, in 2011, when there were already 10 as a result of the injured. There were also episodes with victims in a combat situation, for example, on August 12, 2017, in Iraq, during the siege of Mosul, 2 and 5 soldiers were injured. The Americans were still trying to attribute this episode to the success of the Igilov strike drone.

Will conclusions be drawn?

The question arises: when the Indian military bought this wonderful titanium product, where did they look? In your pocket or checked the status of the account in a Swiss or other bank? It is hardly possible that New Delhi, who periodically flirts with Washington, can explain this "night blindness" of Indian generals and colonels.

If India continues to consciously make expensive purchases of imperfect weapons systems, this could seriously undermine its military capabilities and make its armed forces vulnerable during the war, indignant Indian media write. The fact that the M777 purchases are taking place despite the fact that the military was fully aware of the problems with them is an alarming indicator for the country's arms and military equipment procurement strategy. Because it indicates that "selection criteria other than price and efficiency, as well as the reliability of the weapon model prevail," and it clarifies what criteria it is - corruption and extortion of political favor from Washington. And this is not the first time that India has bought any of the weapons from the United States and found out that the quality does not match the price for the clouds.

But the Indian media and a number of opposition politicians who are "breaking up" the topic hope that out of stories necessary conclusions will be made. But hardly - painfully good "kickbacks" are offered by uncles from across the ocean. So Indian military mice will cry, prick, but continue to eat American cacti. In the end, during a howitzer barrel rupture, it’s unlikely that there will be at least one minister, member of parliament, or general. And there are many people in India.

We are in Yandex Zen
The tragedy of the American army ("The Atlantic", USA)
Bashar al-Assad: In Syria, not the “revolution” that the enemies are talking about, but the revolution of the army and the people against terrorists
89 comments
Information
Dear reader, to leave comments on the publication, you must to register.