Competitor of the complex "Afganit": successful tests in Israel 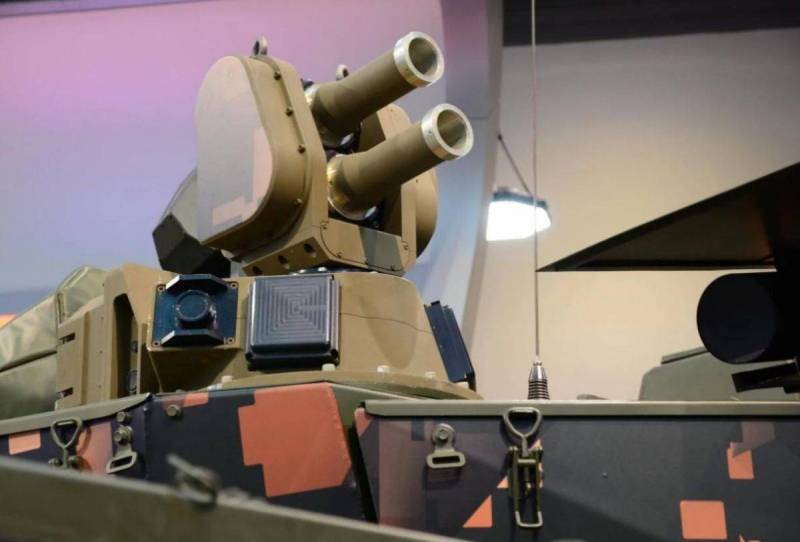 In recent years, Israel has been very active in increasing the survivability of armored vehicles on the battlefield, including through the creation of active defense complexes (KAZ). Engineers of the Israeli defense company Elbit Systems, who created the KAZ under the name Iron Fist (Iron Fist), made great strides in this area. The first tests of the new system passed back in 2006. In mid-January 2020, Elbit Systems conducted tests in which the Iron Fist successfully defeated a 120-mm sub-caliber projectile. Up to this point, they only spoke of the possibility of intercepting sub-caliber ammunition, mentioning the Russian Afghan Defense Complex.

On January 21, 2020, representatives of the largest private defense concern in Israel, Elbit Systems, spoke about the successful testing of an active protection system for armored vehicles of their own design. The active protection complex created by the specialists of Elbit Systems is known as Iron Fist. The system is being actively promoted both in Israel and on the international market: in the 2010s, the US military began to purchase the Iron Fist. According to Jane's, during the tests, KAZ Iron Fist was able to successfully intercept the 120-mm APFSDS feathered armor-piercing projectile.

Adam Griffiths, a senior representative of Elbit Systems UK, shared the results of the complex’s tests and the successful interception of a projectile. He made his statement in London as part of an international conference on armored vehicles (IAV 2020). The international conference on the development of armored vehicles was attended by approximately 250 industry experts from around the world. At the conference, Elbit Systems demonstrated presentation materials and video recording of the intercept of projectile shells by the Iron Fist system.

As part of the presentation of their new product, representatives of Elbit Systems spoke about how they integrated a new launcher into the active defense complex, which received explosive striking elements. Also, as part of the modernization, KAZ received a new radar station. An updated system with new elements of the defeat was able to protect the target from sub-caliber ammunition. First, the radar detected an approaching projectile, after which a new striking element was fired in the direction of the projectile. 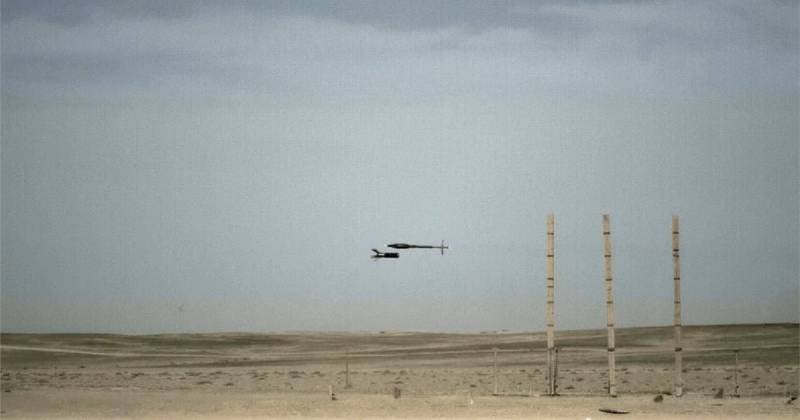 The striking element of the Iron Fist complex intercepts an RPG grenade
The striking element of the complex exploded in the immediate vicinity of the flying projectile, thereby changing the flight path of the latter. As a result of this action, the ammunition ceased to pose a threat to the protected armored vehicles. The concept of the approach implemented by Israeli engineers suggests that, as a result of changing the trajectory, a sub-caliber projectile will either not hit the target, flying past, or will not fall at the optimal angle without causing any harm to the protected object.

At the same time, Elbit Systems talked about the lack of a new installation. The interception of sub-caliber ammunition is an absolute success, but for this the Iron Fist had to be modernized. The flip side of the modernization of the complex was the increased visibility tank or other protected armored object. This happened due to the installation of a new radar, the total power of which during operation reaches 200 watts. The operation of such a radar can be detected by modern electronic intelligence systems of a potential enemy at a distance of up to 500 kilometers.

What is known about the Israeli Iron Fist

The Israeli Iron Fist complex is one of the modern active defense complexes, which is used both by the Israeli army and is exported. In the 2010s, the complex was purchased by the United States. The main purpose is to protect tanks, infantry fighting vehicles and other armored military equipment - from rocket-propelled grenades of anti-tank grenade launchers, as well as anti-tank missiles (ATGMs). The system creates a protective space near the tank, detecting potential threats with the help of radars. Detected missiles and ammunition are then destroyed by special striking elements.

KAZ Iron Fist is a complex system that includes 4 main elements: the first is the radar and infrared sensors manufactured by Elbit, they allow you to detect dangerous objects at any time of the day or night; the second is an optical-electronic laser-based jammer that is able to blind the homing of a guided missile; the third is a launching device with striking elements designed to destroy, disable, or reject ammunition dangerous to a combat vehicle; the fourth is a system that provides the ability to strike against enemy firing points.

Elements of the Israeli KAZ Iron Fist on the roof of the tank
The principle of operation of the Israeli Iron Fist complex differs little from the vast majority of similar complexes in other countries. Having detected a threat with the help of radar, the system launches a grenade in the direction of the target, which destroys the flying ammunition with its own explosive action. The emphasis is on destruction by a high-explosive explosion with minimization of the formation of fragments. For the same purposes, interceptor grenades are made of easily combustible materials.

Initially, the Iron Fist complex was developed for installation on the Namer heavy tracked infantry fighting vehicle, built on the basis of the Israeli Merkava main battle tank. The first versions of the complex were distinguished by the presence of four radar phased array (phased array), providing a full coverage of 360 degrees. Currently, at least two basic variants of the Iron Fist system are known. As standard, the set of elements of the complex weighs 800 kg, but in 2019 a lightweight version was presented - 400 kg, which Israel intends to install on its own wheeled APC Eitan and D9 armored bulldozers.

After the announcements made on January 21 in London, we can say that the Israeli Iron Fist complex, like the Russian “Afganit”, gets the opportunity to destroy sub-caliber shells. The vast majority of all complexes presented on the international market are not able to cope with this task. The explanation is very simple: all sub-caliber ammunition have a very high flight speed, up to 2000 m / s. That is why such ammunition is very difficult to detect and maintain. Difficulties arise with the defeat of such ammunition, which is a monolithic metal blank, sometimes with a tail stabilizer. The creation of systems capable of effectively combating sub-caliber ammunition, as well as their distribution in the future, can significantly increase the security of any armored combat vehicles on the battlefield.

It is worth noting that the modernized Iron Fist complex is not a unique or one-of-a-kind development. At one time in the USSR, and then in Russia, they worked hard and hard to create their own active defense systems for armored vehicles. One of the most modern domestic complexes of this class is “Afganit”. The Russian Afganit active defense system is also capable of intercepting sub-caliber ammunition. 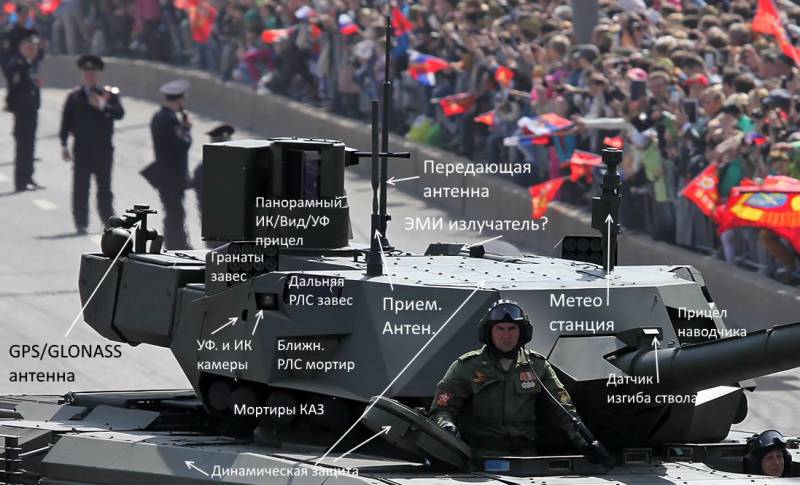 Photo: Vitaliy Kuzmin
Option for identifying devices KAZ "Afganit"
The fact that promising Russian main battle tanks T-14, built on the heavy tracked platform Armata, will receive the upgraded KAZ Afganit with the ability to intercept sub-caliber shells, it became known back in 2016. Then, the Izvestia newspaper wrote about the capabilities of the complex, citing its own sources in the Russian Defense Ministry. The new complex was supposed to be able to fight not only with conventional subcaliber shells, but also with shells with a core from depleted uranium.

In addition to the main battle tanks T-14, the complex can be installed on heavy tracked infantry fighting vehicles T-15, built on the same platform, and its individual components on the promising Russian BMP "Kurganets-25" and other models of armored military equipment. Specialists call the feature of the active complex of protection "Afganit" the possibility of intercepting not only ATGMs and cumulative grenades, but also modern sub-caliber armor-piercing shells (BPS). For this, the complex has the necessary accuracy and speed.

Analyzing the capabilities of the complex installed on the T-14 tank, experts of the Defense Update magazine pointed out that the complex includes both damaging and masking elements. The striking elements are located in special mortars located under the tank tower. Many experts believe that they are similar to similar 107-mm mortars of the Soviet Drozd-2 active defense system. Two additional high-speed short-range Doppler radars help detect the shells attacking the protected armored vehicles.

There are, of course, no exact details about the technical characteristics of the KAZ “Afghanistan” and the possibilities of dealing with sub-caliber shells. But the general principle of the revised version of the complex is the same as was implemented by Israeli designers in the Iron Fist complex. As it is assumed, “Afganit” received a more modern computing system with better performance, as well as updated striking elements. After a shot in the direction of the approaching projectile, such a striking element explodes, deflecting the projectile ammunition from its original trajectory with fragments and a shock wave.

We are in Yandex Zen
Active defense complexes: Russia advances, America buys, Europe tests
The best form of protection for armored vehicles
67 comments
Information
Dear reader, to leave comments on the publication, you must to register.