And then - ourselves: the situation with the Nord Stream-2 gas pipeline 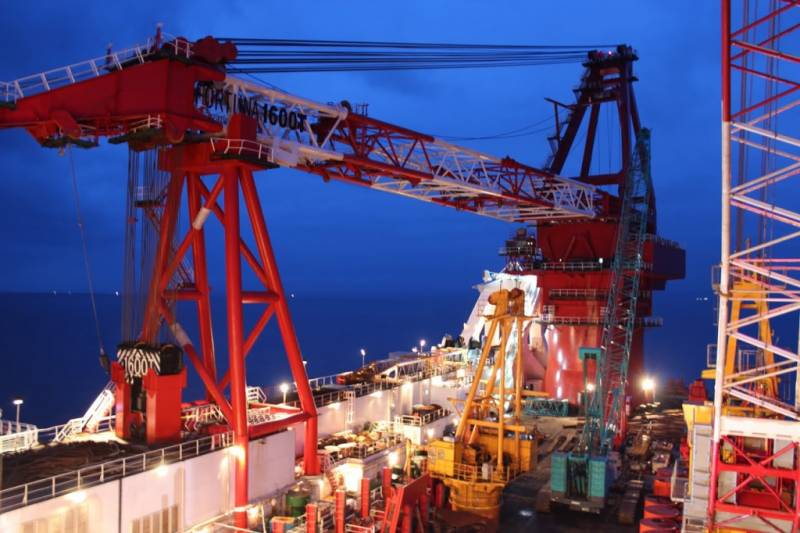 Russia's ill-wishers, impatiently rubbing their hands in anticipation of the Russian industrial giant Gazprom announcing its capitulation in laying the most important pipeline for energy supplies to Western partners, are advised to relax. During the European Gas Conference in Vienna, Elena Burmistrova, deputy head of the corporation, made a statement that Russia is quite capable of completing the gas pipeline on its own, despite all the efforts of the United States.


Recall that under US sanctions, Western companies involved in the process were forced to stop work in the Baltic. It turns out - then yourself ...

According to the representative of Gazprom, the work on the project has already actually been completed by 94%, and the construction of the remaining section of less than 150 kilometers, located in the Danish coastal economic zone, is quite capable of domestic vessels of the corresponding profile. At the same time, various options are considered: how to use the Akademik Chersky multipurpose construction vessel, which is currently undergoing modernization, to carry out work of RAO Gazprom, and to attract Fortuna and MRTS Defender pipe-laying barges to them.

One of these boats already took an active part in the construction - it was Fortuna that laid a certain length of pipes on the Russian section of the gas pipeline. Of course, in many of its technical parameters, it is inferior to the vessels that were involved in the Swiss Allseas, but it can definitely make a kilometer a day. The main thing is that you will have to do this at a depth of up to 100 meters, despite the fact that for Fortuna the maximum is twice as deep. Perhaps the only obstacle to the operation of our barges off the Danish coast may be their lack of a dynamic positioning system, which is considered preferable in the West when carrying out activities of this kind in the sea. However, as far as is known, the Danish Energy Agency (DEA) did not seem to express any categorical objections to the use of ships with anchor positioning. The maximum that a discrepancy can result in is a fairly short time that will have to be spent on additional coordination.

Of course, the ideal option would be to use the "Academician Chersky", which has a dynamic positioning system and has great productivity, but it is worth remembering that at the moment the ship is located in the port of Nakhodka and it will only take several months to reach the Danish coast. Fortuna is right now in Germany, in the port of Mukran and, according to reports, is ready to start work when the weather is favorable for them. Perhaps as early as February 1. Together with MRTS Defender, they will be able to fully complete the installation in two, maximum three months. In this case, the main thing will be achieved: at the official completion of the construction of Nord Stream 2 by May 2020, it should not fall under the EU Gas Directive restricting its use by Gazprom.

However, be that as it may, the pipeline will be completed in spite of everything. Elena Burmistrova assured that, despite the “gas pipelines torn by political contradictions,” Russia does not intend to reduce the volume of supplies of “blue fuel” to Europe, recalling that, contrary to forecasts, RAO Gazprom’s export in this direction decreased in 2019 only 1,5%, and even then in comparison with 2018, when, as we remember, an absolute record was set. In fact, the energy security of the European Union is ensured by the Russian Federation, and not by overseas “benefactors” who put the wheels of Russian projects in the wheel.

In the Old World this is well understood. Thus, the necessity and lack of alternatives for completing the construction of Nord Stream 2 was confirmed during a meeting between Russian President Vladimir Putin and German Chancellor Angela Merkel. And at the above-mentioned European Gas Conference, the words of the Chairman of the Board of the Austrian oil and gas company OMV, RAO Gazprom's partner in the Nord Stream 2 project Rainer Seele, that Europe “should unite to support and protect” the gas pipeline, as it is the guarantor of "independence of energy supplies to the continent and its industrial sector." Extremely sound idea.

We are in Yandex Zen
Situational analysis of the death of the MH17 flight (Malaysian Boeing 777), made on the basis of engineering analysis from 15.08.2014
Results of the week. "God forbid to see Russian revolt, senseless and merciless!"
149 comments
Information
Dear reader, to leave comments on the publication, you must to register.