At Zvyozdochka, they determined the dates for the transfer of the Navy OIC Akademik Aleksandrov 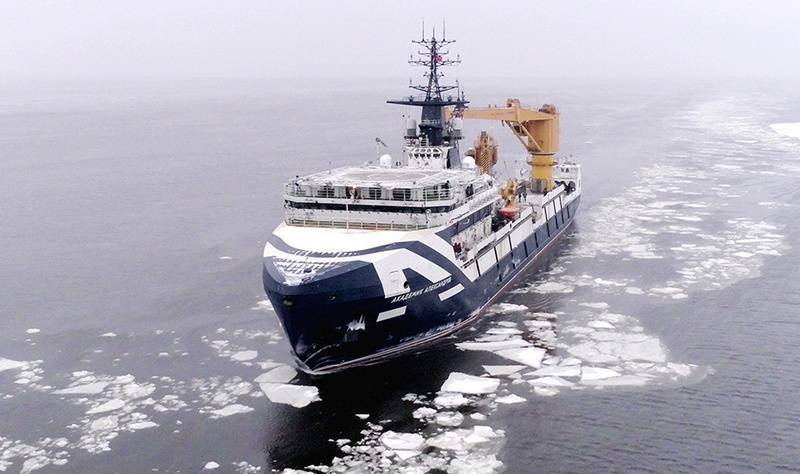 Oceanographic research vessel of the project 20183 "Academician Aleksandrov", built at the Zvezdochka ship repair center, will be transferred to the Naval fleet Russia in February this year, the exact date is still unknown. It is reported by Mil.Press FlotProm with reference to industry and naval sources.


According to the publication, the acceptance certificate at the Academician Aleksandrov OIC has already been signed, the document was agreed on January 23 this year. The ceremony of putting the ship into the Russian Navy is scheduled for February, the date will be determined additionally.

The vessel Akademik Alexandrov was laid in the center of the ship repair Zvezdochka in December 2012 of the year and is the third in a series of four special purpose vessels of the new generation designed on the basis of the project of an auxiliary vessel of the 20180 project. Vessel displacement - 5400 tons, speed - 14 knots, crew - 65 people. On the "Akademik Aleksandrov" a landing pad is provided for one Ka-27 multi-purpose helicopter. The Arc-5 ice class of the ship allows independent navigation in annual Arctic ice with a thickness of up to 0,8 m in winter-spring navigation and up to 1 m in summer-autumn. Navigation area is not limited.

"Academician Alexandrov" is classified as an oceanographic research vessel and is described as "a multipurpose ice-class multipurpose vessel designed for research and scientific work on the shelf of the Arctic seas, ensuring the operation of marine Arctic technology, rescue operations in the Arctic."

The ship was named in honor of Anatoly Petrovich Alexandrov - an outstanding domestic physicist, one of the fathers of the domestic nuclear submarine fleet.

The fourth vessel of the Akademik Makeev series was launched on July 23, 2015 and is being built under the modified project 20180TV (20181) as an armament marine transport.

We are in Yandex Zen
On the "Zvezdochka" launched the ship "Akademik Alexandrov" project 20183 for the Navy
The Zvezdochka Ship Repair Center began construction of the vessel Akademik Aleksandrov for the Russian Navy
19 comments
Information
Dear reader, to leave comments on the publication, you must to register.