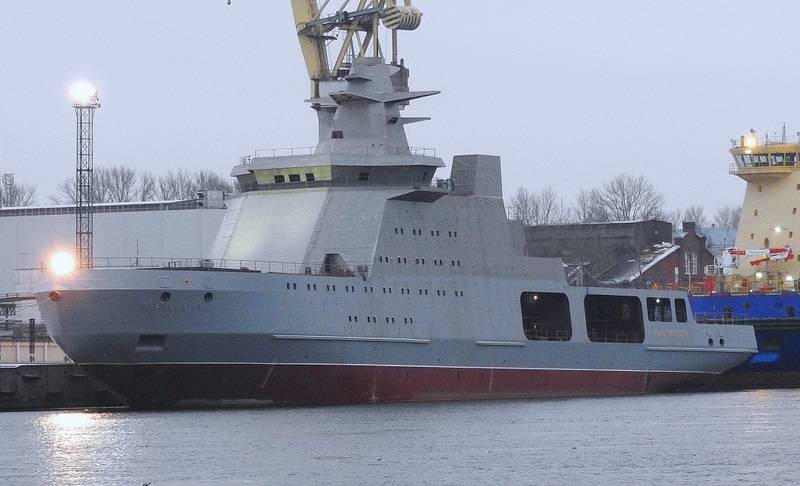 Vyborg Shipyard may receive an order for the construction of a patrol icebreaker of project 23550. About this сообщает Kommersant, citing sources in the shipbuilding industry.

According to the publication, the Vyborg Shipyard, which until now only built civilian vessels, is preparing to sign a contract for the construction of a patrol icebreaker of project 23550. The ship is scheduled for this summer, the transfer to the customer in 2024. According to the sources of the publication, the icebreaker will not be built in the interests of the Russian Navy, but for the FSB of Russia, more precisely - for the border guards.

Currently for Russian fleet two ships of this series are being built at the Admiralty Shipyards. The head icebreaker "Ivan Papanin" was laid in April 2017, launched in October 2019, the first production "Nikolai Zubov" was laid in November 2019. The delivery dates to the fleet are 2023 and 2024, respectively.

The ice class patrol ships (combat icebreakers) of the 23550 project were developed by the Almaz Central Marine Design Bureau (CMKB) as a replacement for the military icebreakers of the 21180 project, through which only one icebreaker, Ilya Muromets, was built and handed over to the fleet.

The ship is armed with AK-176MA automatic artillery and can be equipped with a caliber launcher for cruise missiles. In addition, one multi-purpose helicopter is based on the ship. However, in the FSB version, the armament of the ship may be different, since its main task will be to protect the state border of Russia.

Ctrl Enter
Noticed oshЫbku Highlight text and press. Ctrl + Enter
We are
23550 head patrol ship will be launched at the end of the yearLaid the keel of the first Soviet-era icebreaker with a capacity of 25 megawatts
Military Reviewin Yandex News
Military Reviewin Google News
53 comments
Information
Dear reader, to leave comments on the publication, you must to register.