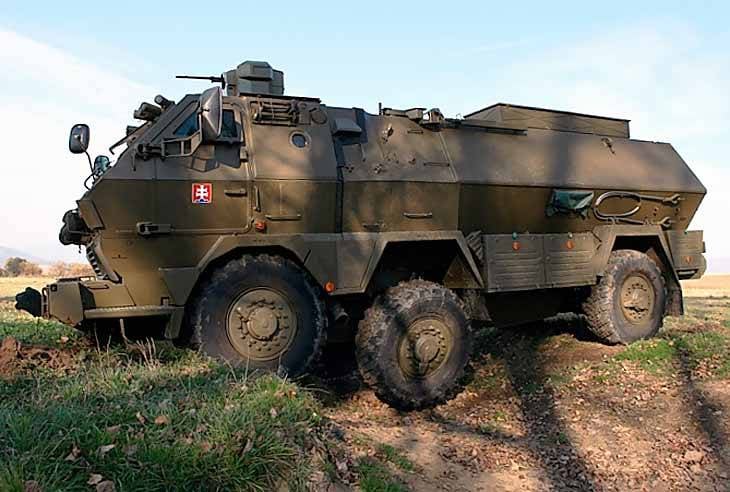 Combat buses. After the peaceful collapse of Czechoslovakia, two states appeared on the map of Europe on January 1, 1993: the Czech Republic and Slovakia. Countries inherited weapons inherited from Czechoslovakia, including Soviet-made ones. At the same time, the industrial and military potential of the countries was different. The Czech Republic became a state with a more developed heavy industry and a good defense complex. Slovakia, in the first place, was a country with diversified agriculture.


Despite this, a number of large industrial enterprises and close production ties with a neighbor have been preserved in Slovakia, which allows the country to manufacture some samples of modern military equipment. In particular, already in the 1990s, an armored car Tatrapan was developed in Slovakia, the basic version of which is used as an armored personnel carrier. In the Slovak army, Tatrapan eventually had to replace the decommissioned BTR OT-64 of Czechoslovak production. In addition, the new combat vehicle was originally designed with an eye on exports, as an inexpensive model of armored vehicles for countries that do not have significant financial resources.

The newly minted state thought about creating a new combat vehicle in the first years of its existence. A new model of armored vehicles was supposed to replace some of the decommissioned BTR OT-64. At the same time, the OT-64 armored personnel carrier, even today, is not so outdated, its Soviet "relatives" BTR-70 and BTR-80 are still in service with many states of the world, including the Russian armed forces. And the Slovak army is in no hurry to completely get rid of Czechoslovak and Soviet technology. The base of the small armed forces fleet is still the Soviet BMP-1 and BMP-2, as well as the OT-64 and OT-90 armored personnel carriers. The last car is a regular BMP-1, on which, instead of a standard turret, a tower from an OT-64A armored personnel carrier with machine gun weapons is installed. 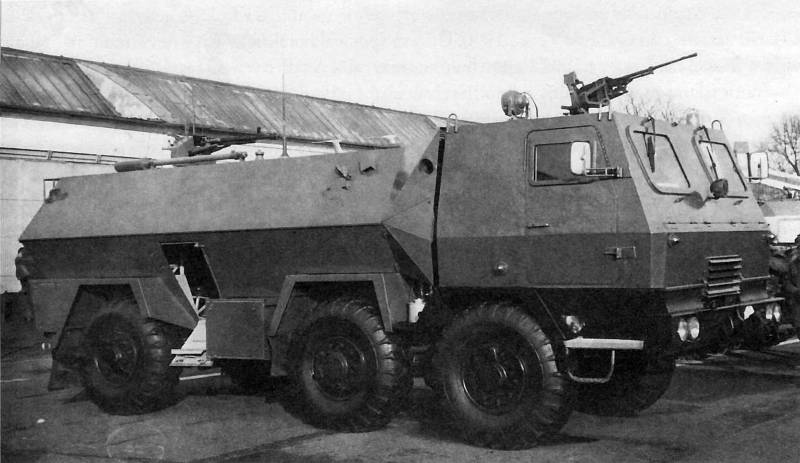 One of the first Tatrapan prototypes
If we talk about the very structure of the Slovak army, then in the country's armed forces there are only two mechanized brigades, and the total number of ground forces barely exceeds six thousand people. The legacy remaining from Czechoslovakia and the USSR is still more than enough. Therefore, initially a new armored fighting vehicle was developed not so much for domestic consumption as for trying to enter the international arms and military equipment market.

Three Slovak companies Tatra Sipox, Konštrukta Trenčín and PPS Detva Holding were responsible for the development of the new armored personnel carrier. Work began already in the very beginning of the 1990s, while by 1994 the first model of a new combat vehicle, officially named Tatrapan, was ready and handed over to the Slovak military. When developing a new armored car, Slovak engineers did not reinvent the wheel and went along the path beaten by many countries, taking as the basis the chassis of a serial off-road truck. Fortunately, there were no problems with such a technique. The new combat vehicle was created on the basis of the Tatra 815 truck with a 6x6 wheel formula.

Conceptually, the Slovak Tatrapan is a modern modular armored car. The Russian analogue closest to it is the Typhoon on the KamAZ chassis. Like the Typhoon K-63968, the Slovak Tatrapan is an armored car with a four-wheel drive layout with all-wheel drive and a 6x6 wheel arrangement. The peculiarity of their new armored vehicle Slovak engineers initially presented a modular design with a removable superstructure. In the standard version, an airborne squad is located right behind the cockpit. This module itself is removable, according to the assurances of the developers, it can be dismantled in an hour of work. 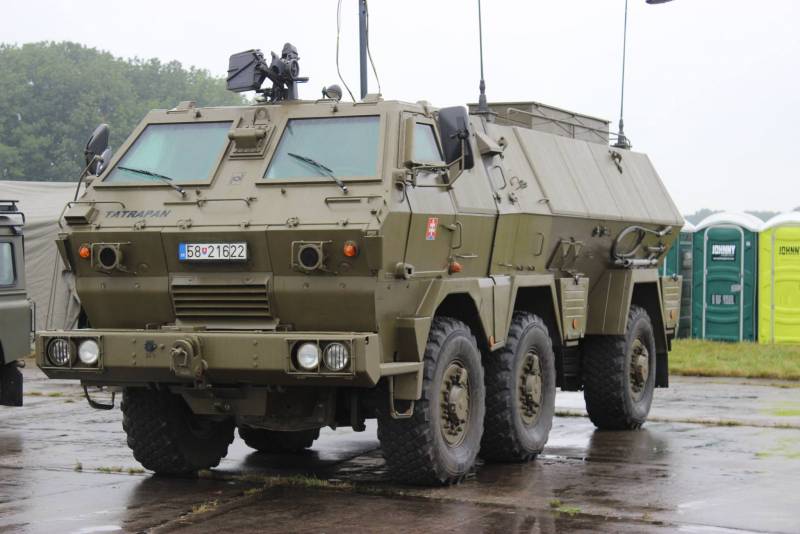 The first of them, Tatrapan T1 / Z1, is the base and is used as an armored personnel carrier. Also created is a version of Tatrapan ZASA, adapted for use in desert conditions.

The Tatrapan AMB version is an armored medical vehicle.

Tatrapan VP or VSRV is a mobile armored command post.

Tatrapan MOD is an upgraded version of the basic version with the installation of the German Deutz engine and automatic gearbox. He also received a V-shaped bottom and increased protection against mine explosions.

The Tatrapan armored personnel carrier is the most common version of the new combat vehicle. The project is based on the chassis of a Czech heavy duty off-road truck Tatra T815 Kolos 6x6. The truck was put into mass production in 1983. A quick glance at the truck and the modular armored car is enough to understand that during the work the front and rear parts of the car changed places. The crew cabin is located above the two front axles. The combat vehicle retained full-time full-time drive, the 6x6 wheel arrangement, the front pair of axles is controllable.

The standard version of the combat vehicle received a 19-liter diesel engine Tatra T3-930-55. This air-cooled engine is turbocharged and has a maximum power of 369 hp. Engine power is enough to disperse an armored personnel carrier with a combat mass of 22,5 tons to a speed of more than 90 km / h when driving on a highway. At the same time, the engine is paired with a manual gearbox with 8 gears for moving forward and two for reverse. The Tatrapan MOD version has a more powerful German engine manufactured by Deutz (400 hp), paired with an automatic transmission. Cruising on the highway reaches 1000 kilometers. 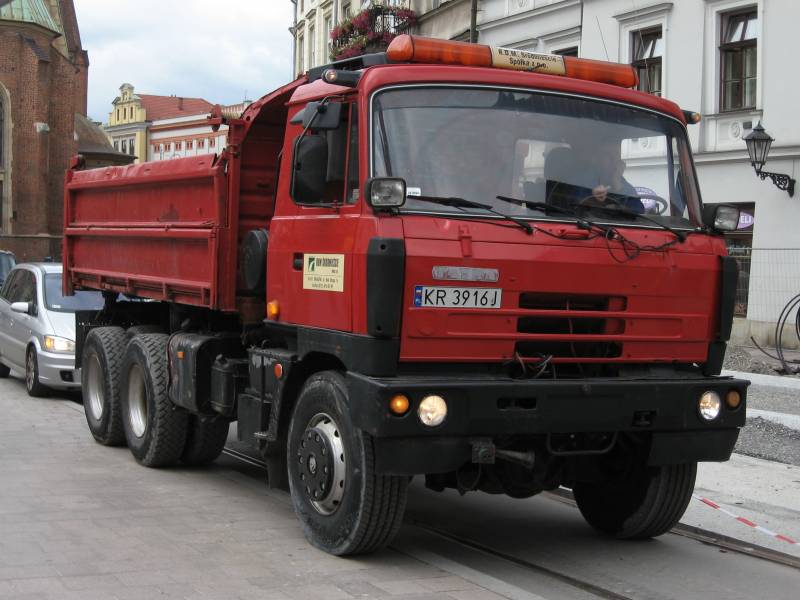 Photo by wikipedia.org
Truck Tatra T815
Thanks to the well-proven off-road chassis with a 6x6 wheel arrangement, Tatrapan feels good on rough terrain and is able to develop high speed when driving on roads. All models received a centralized tire inflation system. The driver can adjust the pressure level on the go from his workplace. The armored vehicle is able to calmly overcome trenches and ditches up to 1,1 meters wide, climb walls up to 0,6 meters high and wade through water bodies up to 1,4 meters deep, while Tatrapan cannot swim.

The length of the combat vehicle reaches 8460 mm, width - 2500 mm, height - 2895 mm or up to 3380 mm when installing various weapons systems on the roof. Ground clearance - 390 mm. The manufacturer guarantees the possibility of operating the machine at ambient temperatures from -40 to +50 degrees Celsius.

Tatrapan is an armored vehicle with a hoodless layout. An engine is located in front of the combat vehicle, above them is a cabin with seats for the commander of the fighting vehicle and driver, the crew can be additionally equipped with a machine gunner. Behind the cabin there is an airborne squad module, designed to transport 10 motorized rifles with full armament, and if necessary, 12 paratroopers can be placed inside. The paratroopers are sitting facing each other along the sides of the hull. Landing and landing is carried out through the ramp in the rear of the hull. Also, for landing, a door can be used in the starboard side of the hull located between the axes of the combat vehicle. Reservation protects crew and troops from small arms fire weapons and small fragments of shells and mines. Provides circular protection from 7,62 mm armor-piercing bullets from any distance. Tatrapan is also equipped with a system of protection against weapons of mass destruction and several automatic fire extinguishing systems. 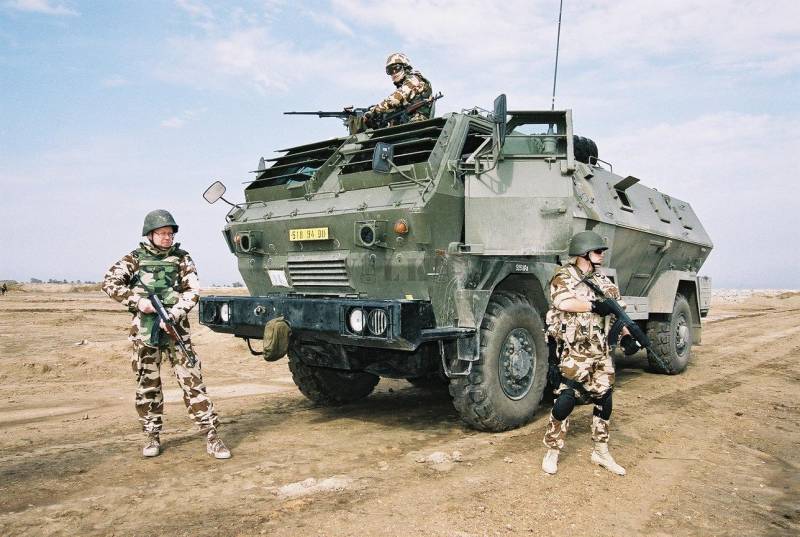 As weapons on the basic version of the machine can be installed 7,62 mm or 12,7 mm machine guns, as well as 40 mm automatic grenade launchers in various configurations. Machine guns can be placed both on turret turrets in the front and rear of the hull, and as part of remotely controlled installations. Also, standard smoke grenade launchers of 4 pieces from each side can be installed on the machine.

Despite the simplicity of design decisions and low cost, the modular armored car created in Slovakia did not gain much popularity in the global arms market. In total, about 50 such combat vehicles were assembled in Slovakia, some of which were acquired by Greece for Cyprus. Some more is used in the armed forces of Indonesia.

The Slovak army is also in no hurry to rearm on Tatrapan. At the same time, despite their small numbers, the combat vehicle was quite actively involved in various peacekeeping missions around the world. The Slovak military used Tatrapan armored vehicles in Kosovo, Eritrea, in the buffer zone in Cyprus, in Afghanistan. Also, Slovakian miners used machines with increased mine protection, adapted for operations in desert conditions in Iraq.

We are in Yandex Zen
Armament of domestic armored personnel carriers
Family BTR-60 / 70 / 80 in combat
24 comments
Information
Dear reader, to leave comments on the publication, you must to register.