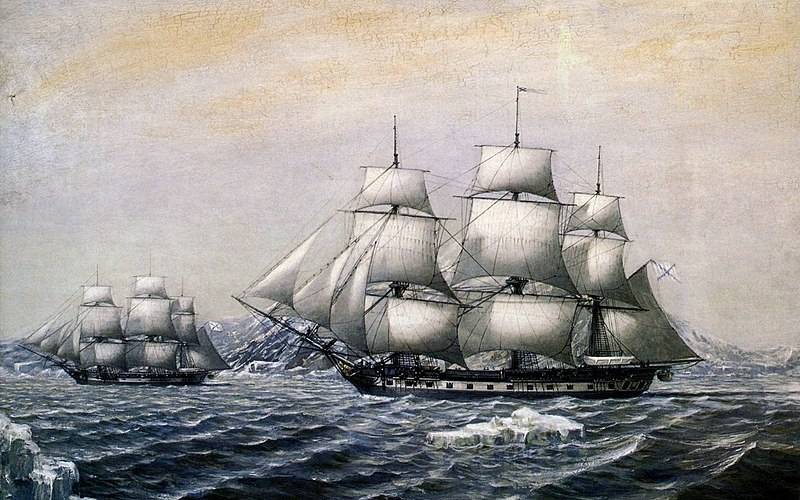 200 years ago, on January 28 (January 16 according to the old style) of 1820, the Russian naval expedition of Lazarev and Bellingshausen discovered Antarctica. This greatest geographical discovery of Russian sailors is hushed up by the entire “world community”.

Even ancient geographers believed that in the Southern Hemisphere for balance there should be the same mass of land as in the Northern Hemisphere. In the Renaissance, the idea of ​​the existence of a vast southern continent (the “unknown southern continent”, Terra Australia incognita) received a new life. Then began the era of great geographical discoveries. From time to time, the discoveries of Western researchers were considered the discovery of part of the new mainland. Magellan discovered Tierra del Fuego, and it was considered part of the vast southern continent. The northern coast of New Guinea, New Holland (Australia), and New Zealand were taken as part of the southern land, but later new researchers disproved these opinions.

At this time, the Dutch, British and French competed, looking for new lands for colonization and robbery. Organized new expeditions. France in the 1760s organized several expeditions to search for the southern mainland, but they were unsuccessful. During the Second circumnavigation of the famous British traveler D. Cook (1772-1775), London tried to get ahead of the French in the discovery of the Southern mainland. " Cook went on a campaign an ardent supporter of the existence of the sixth continent, but ended up disappointed in this idea. In England and France it was decided that in the southern latitudes there are no new significant lands and their search does not make sense.

However, in Russia they thought differently. Many phenomena indicated that the southern mainland exists. At the beginning of the 1803th century, Russian sailors entered the oceans and began to think about studying the southern polar seas. Ivan Kruzenshtern and Yuri Lisyansky in 1806-1807 made the first Russian circumnavigation. In 1809-1817, Vasily Golovnin traveled around the world on the sloop "Diana", in 1819-1813 Golovnin made a new trip around the world on the sloop "Kamchatka". Around the world voyages were made by Mikhail Lazarev on the frigate "Suvorov" in 1815-1815. and Otto Kotzebue on the Rurik brig in 1818. The results of these travels indicated that the southern mainland exists.

To prove this fact, a separate special expedition was required, the purpose of which was one - to find the southern mainland. This was announced to the Russian government by the head of the first Russian round-the-world expedition Ivan Kruzenshtern. The captain suggested organizing two campaigns at once - to the North and South Poles. Each expedition was supposed to have two ships — the Northern Division and the Southern Division. The Northern Division, on the Otkrytie and Well-intentioned sloops under the command of Lieutenant Commander Mikhail Vasiliev and Lieutenant Commander Gleb Shishmarev, was to open in the north the passage from the Bering Strait to the Atlantic Ocean. The Southern Division was to find the sixth continent. The southern expedition at the suggestion of Kruzenshtern was to be led by Thaddeus Bellingshausen (he was a member of the first round the world under the direction of Kruzenshtern). The sloop “Vostok” was transferred under his command, the second ship was the sloop “Mirny”, Lieutenant Mikhail Lazarev headed. He was an experienced sailor, a participant in the war with the Swedes and the French, the head of a round-the-world trip on the frigate "Suvorov".

The purpose of the expedition sounded foggy - discoveries "in the possible proximity of the Antarctic Pole." In fact, the Russian fleet was interested in all the southern waters of the Pacific, Atlantic, and indeed the Indian, oceans. Having left Kronstadt on July 4 (16), 1819, the ships visited Copenhagen and Portsmouth and arrived in Rio in early November. Before Brazil, the ships of the southern and northern expeditions went together, then divided. Bellingshausen first headed straight south, and the expedition on the sloops “Discovery” and “Well-intentioned” went to Cape of Good Hope, and from there to the port of Jackson (Sydney) in Australia.

Ships led by Bellingshausen circled the southwestern coast of South Georgia Island, discovered by Cook, discovered the three islands of the Marquis de Traverse, and examined the South Sandwich Islands. Moving south, as far as the ice allowed, on January 27, 1820, Russian sailors for the first time in stories our fleet crossed the southern polar circle. And on January 28, the Vostok and Mirny sloops came close to the Antarctic continent. Lt. Lazarev later wrote:

“On January 16 (according to the old style. - Auth.) We reached latitude 69 ° 23 'S, where we met frosty ice of extraordinary height, and on a beautiful evening, looking at the saling, it stretched as far as vision could reach ... From here we continued our way to the ost, encroaching on the south whenever possible, but we always met the ice continent, not reaching 70 ° ... Finally, that motherland in the south was discovered, which so long had been sought and the existence of which the sitting philosophers in their offices considered necessary for equilibrium of the globe. "
The Russian pioneers did not stop there, continuing to go east, they tried again and again to go further south. But each time they were stopped by "hard ice". This convinced the researchers that they were dealing with the mainland, and not with islands or ice. In early February, Russian ships turned north to Australia. Having repaired the vessels and replenishing supplies, the sloops went to the Pacific Ocean in May, opened several islands and atolls (Vostok, Simonova, Mikhailova, Suvorova, Russians, etc.). Then the expedition returned to Port Jackson (Sydney) and in November 1820 again moved to the South Polar seas.

Without abandoning attempts to go as far south as possible, Russian sailors crossed the Arctic Circle three times, at the beginning of 1821 they discovered a number of new lands, including the island of Peter the Great, the Land of Alexander I (the largest Antarctic island). In total, 29 islands and one coral reef were discovered during the expedition. Then the “East” and “Mirny” from the South Shetland Islands headed for Rio de Janeiro, and from there across the Atlantic to Europe. On July 24 (August 5), 1821, after a 751-day campaign, the expedition returned to Kronstadt. During this time, Russian ships traveled about 100 thousand km! Russian sailors have made the greatest geographical discovery since the beginning of the XNUMXth century - they discovered the unknown southern mainland, Antarctica! 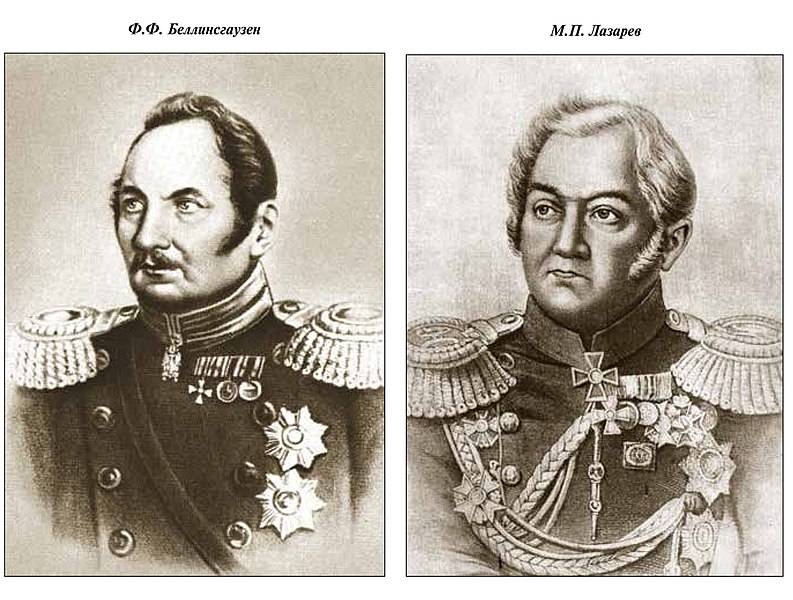 The grand geographical discovery of Russian sailors is silent in the world. Throughout the "world community" they pretend that Antarctica has opened by itself. Moreover, in England and the USA, they tried to appropriate a priority in the discovery of the southern continent. It is worth noting that a characteristic feature of the “world community” is its unwillingness to recognize the priority of Russia and Russians in no areas and under any guise.

Our Westerners-liberals fully adapt to Western standards. Therefore, they like to shout at every corner about the "savagery" and "backwardness" of Russia, currying favor with their Western masters. We must remember that the greatness of Russian history is not only in its military victories and the industriousness of its people, but also in the enormous contribution that the Russians have made to world science, in the cause of humanity's knowledge of itself and the world around it.

By their nobility and kindness (other nations immediately staked out the Ice Continent), the Russians declared Antarctica open and rightfully belonging to them as an international zone. In modern conditions, when the sixth continent is the only uninhabited and undeveloped continent of the planet, interest in its resources (including fresh water) has increased significantly. Many countries have territorial claims in the Antarctic, including Norway, England, Australia, New Zealand, Chile, Argentina and others. The Third Reich also had its own program for developing the continent. The USA and China have special interests in the region.

We are in Yandex Zen
The first Russian Antarctic expedition. Part of 2
Around the globe for spices. Expedition of Fernand Magellan
36 comments
Information
Dear reader, to leave comments on the publication, you must to register.