How Westerplatte held the defense 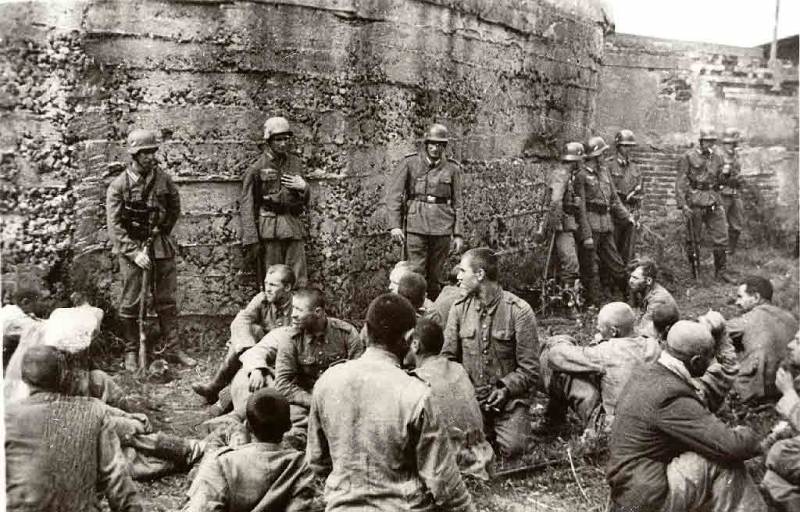 The question of command on Westerplatte and the unshakable heroic will of Major Sukharsky seemed indisputable from the very end of World War II. Sixty years later, it suddenly ceased to be so unambiguous, as the picture of the defense of the military transit warehouse on Westerplat from September 2 to 7, 1939 appeared, completely opposite to the one that Polish students study in the classroom stories!

Streets, schools and pioneer squads are named after Major Sukharsky. His image, among others, appeared on the anniversary coin and postage stamp. A merchant ship is named after him. But does Major Henry Sukharsky really deserve these honors? Who should be praised for making Westerplatte such a famous name in Polish history?

Second Lieutenant Zdzislaw Krengelsky, in 1939 the commandant of the outpost Pier, describes his commander:

Major Sukharsky (...) did not possess extensive military knowledge. Yes, as a commandant, he did not need them. On military matters he had a deputy - captain Dombrowski. Major Sukharsky himself was not interested in military issues, but he was very fond of discussing politics and imposing his views on his subordinates. He did not respect anyone's convictions and forced subordinates to adopt even their own lifestyle. His presence at general meetings, as a rule, created a difficult atmosphere. In relation to the authorities - submissive to subservience and toadness. Vain in relation to his official position and the value of his own person. The post of commandant Westerplatte brought great material benefits, which easily filled the two savings books of Bank PKO for 10.000 zlotys each. It was a type of money-grubber. (...)

Such an episode testifies to his attitude to people: during an aggravation of the situation, an order came to not leave the territory of Westerplatte. In this regard, Captain Dombrowski suggested that Lieutenant Grodetsky, reserve officer and adjutant of the commandant, dine with us. Major Sukharsky resolutely opposed this, believing that a joint dinner with Lieutenant Grodetsky would discredit his honor. It seems that the beginning of the war crossed out many of his plans. All that he saved was gone. Not quite military, to command, he only wanted to demonstrate diligence and hold out for twelve hours. Therefore, after the air raid on the second day of fighting with him, the first of the garrison suffered a nervous breakdown. From that moment he ceased to exist as a commander.

So, the day came on September 1, 1939. At 4:45, the battleship Schleswig-Holstein opened fire on the Polish garrison of Westerplatte. Thanks to the excellent training under the leadership of Captain Franciszcz Dombrowski, deputy commandant of Westerplatte and the commander of his security team, 220-230 Polish defenders were not at a loss, and 2-3 minutes after the first explosions took up their military posts. Before the war, captain Dombrowski, a specialist machine gunner, paid great attention to the location of firing points in the defense system of the military transit warehouse, which played a key role in the days of dramatic battles for Westerplatte.

The message sent in plain text was sent to the air: \

Help, we were attacked!
The first one to receive the message was apparently the senior sailor Zdzislaw Pekhotsky, the radio telegraph operator of the submarine Zhbik.

On this day, the Polish soldiers repelled two assaults, inflicting heavy losses on the enemy (they themselves lost four soldiers).

The next day passed in skirmishes with German patrols. In the evening, a lull came, and it seemed that the second day of the battle would end. However, shortly after 18:00 p.m. two squadrons of the Junkers U-87 appeared over Westerplatte, and within half an hour in two raids they dropped 8 bombs of 500 kg, 50 bombs of 250 kg and 200 bombs of 50 kg each (for a total of 26,5 , 5 tons). The bombing effect was overwhelming. Barracks and posts literally "floated" from the explosions of bombs. Post number XNUMX was destroyed along with the entire team with a direct bomb hit. Two bombs hit the barracks. All four new mortars were destroyed at the positions where they were thrown by soldiers who fled to the barracks. The telephone connection between the posts was broken. The soldiers began to show signs of panic. Teams of outposts "Elektrovnya" and "Fort" arbitrarily left their positions. After a raid by German dive bombers, a hundred-meter column of heavy smoke and dust rose over Westerplatte, because of which nothing could be seen. The Germans decided that no one survived on Westerplatte.

Meanwhile, Major Sukharsky was in a state of severe shock in the barracks. Cried over the death of his orderly, Private Józef Kita, who died at the post of number 5. Being shocked by the raid of the “Lapporteurs”, he ordered to burn secret documents and cryptographic books (statutory procedure before surrender). But I didn’t follow the exact execution of the order, as a result of which the journal of encrypted messages and the code of Polish signals fleet after surrender, Westerplatte fell into the hands of the Germans. This led to the fact that the Germans began to intercept all the messages of the ships of the Polish Navy and ground units that defended Oksyva and the Hel Peninsula.

In this regard, it is worth mentioning that Sergeant Casimir Rasinsky, a radio telegraph of a military transit warehouse, was not shot by the Gestapo (according to the official version), but was transferred to the Kriegsmarine radio interception center in Brewsterort. Collaborated voluntarily or was he forced to? From the German archival data it follows that he proposed cooperation himself! 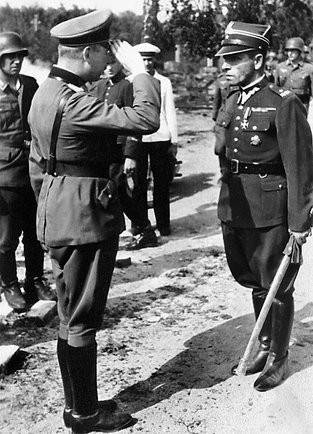 At the end of the battles for Westerplatte, General Friedrich Eberhardt salutes Major Heinrich Sucharski. But did he deserve it? ..
It seemed that the surrender of the military transit warehouse was only a matter of minutes. Sukharsky invited Dombrowski to capitulate. But the indignant Dombrowski pointed out to him that shooting from posts and other positions was heard in the distance:

- Listen, people are fighting! He said to the major.

“That makes no sense.” We followed the order.

Until his final surrender, he hid from his deputy important information: the date of the expected German attack and that no one would come to the aid of Westerplatte. Information came on the eve of the war from Lt. Col. Vincent Sobochinsky, Plenipotentiary Commissioner of the Republic of Poland in Danzig. Why did Sukharsky keep this a secret, exposing his soldiers to unnecessary risk? Why didn’t he share information with his deputy, which would be completely natural?

Sukharsky ordered a white flag to be hung out by Corporal Jan Gembura. He lifted either a white sheet or a tablecloth over the roof of the barracks. On the Schleswig-Holstein battleship, observers spotted a white flag among the puffs of smoke and the assault company received a message from the ship: “Nicht schißen, warte, weiße Flagge auf Westerplatte” (“Do not shoot, wait, the white flag is over Westerplatte”).

The Germans were waiting for confirmation from their observers, but meanwhile Captain Dombrowski found out about the white flag above the barracks. Enraged, he ordered the soldier he met to rip him off immediately. And the next minute there was no more white flag over Westerplatte.

The major, who had thought of surrendering as early as 12 hours after the outbreak of war, also became furious with the news of the torn flag and fell into a state of severe shock. He had a seizure of epilepsy - he was shaking and wheezing, and foam appeared on his lips. The major’s arms and legs began to make some arbitrary movements, after which he lost consciousness. By order of Dombrowski, Lieutenant Stefan Grodecki brought in a doctor, captain Mechislav Weak. Together they laid Sukharsky in a bunk and tied with straps. The major received a calming injection, and the seizure gradually disappeared. The officers, on the orders of Dombrowski, vowed that they would not reveal to the Westerplatte team the facts that Sukharsky wanted to hand over to Westerplatte, that he could not stand the mental stress and ceased to be a commander. The soldiers weren't supposed to find out about anything. This would only aggravate the chaos and undermine the possibility of further defense. Nothing indicated that the commandant of the military transit warehouse was forced to surrender to Westerplatte. But shock and a nervous breakdown completely removed him from further defense command.

It is worth mentioning that after the raid on Westerplatte there were more strange events, as evidenced by the graves of Polish soldiers found by the Germans. There are stories of some kind of riot among soldiers on Westerplatte on the Internet. Will this mystery ever come to light? Still alive are people who know the answer to this question.

The soldiers respected captain Dombrowski, who was nicknamed Cuba. After a nervous breakdown of the commandant of Cuba, as the most senior officer in the rank, he took command and quickly restored the defense. Instead of broken post number 5, he organized two new posts and forbade the soldiers to move around Westerplatte, which should have made it difficult for German observers to reconnoiter Polish positions from the battleship and from the other side of the port canal. Dombrowski ordered to report the loss of life to the dead and wounded. There were 10 of them, which is not so much for a garrison of 220-230 people. Westerplatte had something to fight - stocks weapons and food would last for several weeks.

Dombrowski didn’t take command over himself in order to gain fame and honors in the future, which, by the way, he never asked for after the war; he also did not identify with heroism. He simply believed that the resistance should be continued while there were such opportunities, because the surrender of Westerplatte would be a painful blow for all Poles, whom the words of the front-line reports “Westerplatte continues to defend” gave hope and raised to fight against the Nazi invaders.

So, Sukharsky was locked in the basement under the supervision of Grodetsky. Later, when he was allowed to be at the command post, he made the impression of being absent.

Since September 5, the major began wandering around the barracks and pushing the non-commissioned officers there to persuade Dombrowski to surrender. By then, Sukharsky was already so upset mentally that he was a miserable sight. He did not believe in the possibility of continuing the defense, cried in front of ordinary soldiers and, apparently, did not take any part in the command of the defense of Westerplatte.

Cuba faced a difficult task. On the one hand, he had to continue to command the defense, and on the other hand, it was necessary to keep the major from contact with the soldiers so that they would not know that their commander did not see the point in further resistance. I constantly had to call my boss to order, not being afraid to resort to strong words: “Damn it, pull yourself together, people are looking at you!” Or: “Genek, if you show yourself again among the soldiers, I'll lock you up!”

Lieutenant Grodetsky, trying to bring the major to his senses and restore his dignity, pointed to the Virtuti Militari order on the chest of Sukharsky and asked: "Mr. Major, does this oblige you to anything?"

Dombrowski, being a disciplined officer, did not lock Sukharsky, because he did not want confusion among the soldiers. Until the end of the defense, he created the appearance that the major commands his subordinates. When liaisons with reports for the major ran from the posts, then, as a rule, he was "tired" or "resting." The reports were received by Dombrowski himself. He issued orders and instructions. Thanks to him, the defense was organized. Westerplatte continued to hold the defense.

We are in Yandex Zen
About Stalin and Khrushchev
What you didn't want to know about England
129 comments
Information
Dear reader, to leave comments on the publication, you must to register.