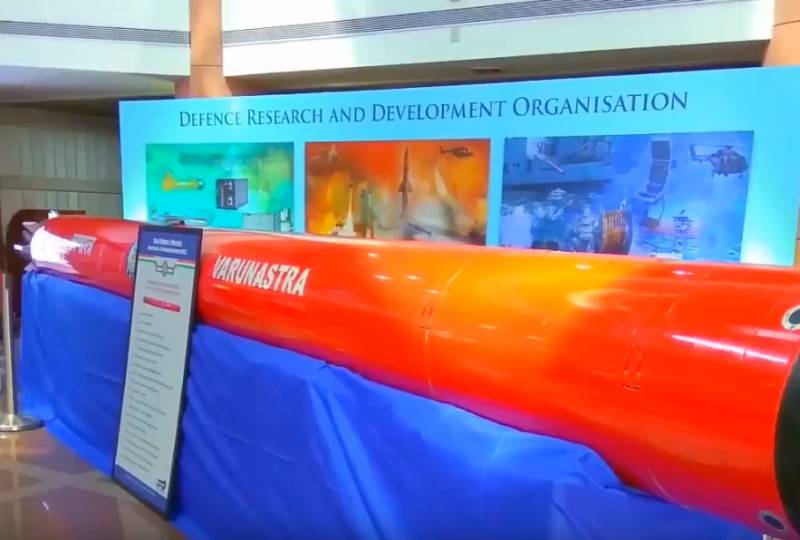 The Indian Navy command spreads the message that in the near future the submarine fleet of the country's naval forces will receive the first batch of advanced anti-ship anti-submarine torpedoes "Varunastra". It is noted that this will significantly increase the combat potential of the Indian fleet.


From an Indian media report:

The deployment of such torpedoes puts India among the eight countries with such an effective weapons. The torpedo was designed and built in India. It provides decisive firepower in the event of a collision at sea.
Reported on some characteristics of the ammunition.

The torpedo has a total mass of about 1500 kg, of which 250 kg are explosive. The speed of the torpedo reaches 74 km / h. The torpedo goes to the target, adjusted by GPS.

The depth specifications were clarified: the torpedo is capable of operating at a depth of up to 450 m.

The torpedo was designed at the Naval Science and Technology Laboratory of the Defense Research and Development Organization of India (DRDO).

Initially, Sindhu-class submarines will be armed with such torpedoes, including the 2000 Sindushastra built in XNUMX. Also, the “Varunastra” torpedoes were put into service with Talwar class frigates, Kamorta class corvettes and other surface naval warships of the country's Navy.

At the same time, India is already considering the possibility of exporting Varunastra. Previously, Vietnam was named as a country for export.

Today, the Indian submarine fleet consists of 16 submarines, which is much smaller than China with its 70 submarines. New torpedoes will give the country's Navy the necessary firepower.

We are in Yandex Zen
Reports from the militia of New Russia for 27-28 September 2014 of the year
Interview of Vladimir Putin with Radio Europe-1 and TF1
46 comments
Information
Dear reader, to leave comments on the publication, you must to register.